Distillery tours are so much fun… if you like whisky, of course. With a few now under my belt, I feel like I can usually put them into one of two categories. There are the informative ones, which are so good; I’m not so much of a geek, but I try to soak in as much as I can! Then there are the basic tours: the kind where, when you ask the guide something, they either butt in with an answer (not understanding the question in the first place!) or they will ask you to wait until they get to that part in their script. Meh! In my personal opinion, after admiring the outside of a distillery, the other reference is the guide, and they can be the difference between a great tour or a pretty sub-standard one.

Recently, I was in the Speyside area of Scotland, and oh boy, was I spoiled with all of the choices. Only there a week with family, I had to pick my tours wisely. I obviously had to visit the new Macallan Distillery: I should say “Distillery” in name only, as to me, it felt like it was more of a giant hotel reception. Very different to other distilleries I have been to, but not too dissimilar to the set up at King Car/Kavalan in Taiwan. I wonder if it was designed to appeal to Asians? I heard that on a particular Macallan tour, the iPad the guide was reading from crashed and the tour had to be paused till the computer was rebooted. That gave me a little giggle. The outside is kind of cute, though; I know people are reminded of Teletubby Land, but for me, I saw Goombas from Super Mario World!

We visited a few other distilleries besides The Macallan, but one that stood out the most and which I felt compelled to write about was the Knockdhu Distillery, the home of anCnoc. Lorraine, our guide, was amazing; I was there for nearly three hours and she gave a no bullshit (excusez mon français) tour of everything from the barley to the liquid to maturation. Her background in farming really added that extra sumfin’ sumfin’. So I felt inclined to tell you a little about the distillery, the tour guide and to review a couple of limited whiskies that have been released for their 125th anniversary.

Why did this one particularly stand out? Lorraine tailored the tour to suit us, she understood that we wanted to ask lots of questions and she had the answers including plenty of in-depth information. As she explained, before taking her first tour group, she spent two weeks shadowing the guys who run the production at Knockdhu, learning about every stage of the process by actually doing it. As a result, if any of the guys had to leave suddenly and unexpectedly, she’d be able take over for a while. I wonder how many tour guides out there could do the same?! You can sense how thirsty she is for learning about every single process in the distillery. This is great, and I love seeing more and more women having an interest in this industry. Lorraine does not give the impression that she is afraid of the hard work! She is so much more than a tour guide, and that is refreshing to see after witnessing some robots in other distilleries, where you can tell that it is only a job and there isn’t a real interest. Rant over!

The other thing about this tour is that it is completely free, and the fact that they could give us as much time as we wanted is very generous. The only other time I experienced this was at the Glencadam Distillery, where Doug (the distillery manager) was exactly the same. Ask him anything (we did) and he will give you the answer. Both distilleries give you their time, let you sample some whiskies, and all they suggest is that you donate some moolah to one of the charities they are supporting. Fantastic!

I had originally wanted to write lots more about anCnoc, but both Mark and Jason have written great pieces on them that you can check out so you are saved from any further gushing.

Timing is everything in life, and I was quite lucky because when I was there, they were celebrating their 125th anniversary. I took away two samples released to celebrate this milestone, which I will be reviewing today. You can purchase the ancNoc peated from the Whisky Exchange for £78.95, or via Master of Malt for £79.95. The 16-year-old cask strength is £99.95 via Master of Malt, or £98.95 via the Whisky Exchange.

On the nose: a bit sharp initially, but it is sweet with vanilla fondant icing and candied fruit. Sticky honey and light toffee is present, reminding me of toffee pennies. Oaty aromas with a light red berry compote where watery raspberries, red currants and red grapes mingle. Strawberries and cream sweeties are on the tongue with that hint of artificial cream. Slightly hay-like with a chalky, mineral-like scent. I sense something akin to raw pressed nut oil and rubber. There is further barley sugar and sweet-shop candy dipped in pear juice as it oxidises.

In the mouth: the vanilla icing sugar sweetness is there with honey and caramel. The mouthfeel is instantly waxy, and if you hold the liquid in your mouth, a light chili spice appears. It is bitter and tannic with cask char making it slightly woody, and there is the sensation and taste of drinking a well-brewed black tea. Brine and rubber hints combine with grape fruit and pear juice, present with a fruit-flavoured liquorice that makes the tongue slightly numb. A sprinkle of lemon zest at the end. The finish is medium and warming where it is slightly rubbery in the background. It is waxy but becomes drying with lemon zest bitterness and sweet black tea residue dusted with white pepper.

In the mouth: a light vanilla icing, custard creams and more cereals. More vanilla via toffee with popcorn, almonds, a touch of bitterness from the wood. Some honeycomb and that gentle cinnamon once more. Water showcases more cream, white chocolate and lemon peel.

Time benefits this whisky. As I shared out the bottle between members of the team, I noticed that it became less green and more fruity. There’s still a sense of disappointment despite the improvement. After all, this is Knockdhu and we know what previous incarnations delivered. Also the asking price means I’m forced to mark it down a point. Still, enjoyable nevertheless if slightly flawed and overpriced.

In the mouth: gorgeous, mouth-watering, thick texture. Instantly a great spirit coats the tongue bringing that intense syrupy, softly baked pear sweetness. But that initial first impression fades from brilliance, just a touch: bran flakes, sage leaves, and again it’s that Assam note which brings a roundedness to the sweeter notes, which are a little two-dimensional if just very pleasant.

I am a fan of anCnoc, having thoroughly enjoyed my visit there a couple of years back, and I get to their whiskies far too infrequently. Any of their range are generally excellent whiskies – buy them and be happy. But there’s just something so very classic about this anniversary edition though, a whiff of the old school about it; not quite perfect, but well on the way. A wholesome, tasty whisky; and though perhaps a tenner too much, you should buy it.

On the nose: instantly, Bacon Frazzles crisps. Sweetness tries to break through hot smoked salmon and smoked bacon meaty aromas. There are scents of smoke, salt, brine and peat. This whisky is very savoury and full of umami. Some red fruit comes through eventually. Stewed apples and lots of banana. It reminds me of plantains on a barbeque, a slight hint of kippers and pickled herrings. There are toasted oats and lapsang souchong tea with a smoked cheese kick.

In the mouth: sweet with icing sugar and red berries soaked in white grape juice. A chili spice that builds, but it is also very smooth, with a vegetal peat that is quite delicate. Bitter and tannic with a little bit of menthol that tickles the tonsils. From the nose, the smoked cheese and smoked meats are there with a dusting of ash and slightly salty brine. White pepper is present at the back of the throat, where it becomes drying, especially around the teeth. On the finish, the flavour doesn’t last too long, but the warming heat is there, making it medium in length. A nice light pepper burn on the throat, and drying, as if you have just eaten a sliver of Austrian smoked cheese.

I enjoyed both of these whiskies; however, the 16 year old was a slight let-down because of the mouth and finish. I felt that it did not quite match the delightful nose, and if it had, I would have given it a solid score of 7. I felt that the finish was overly bitter and tannic, which took the flavour away. However, some water and oxidisation gave the liquid a buttery popcorn quality. It also seemed a little bit spicier and the tannic bitterness was not as prominent. I would suggest a couple of drops of water (though I don’t usually add any), as it did cut the aggressiveness down and mellowed it out. At just under £100, it is somewhat pricey, and I definitely prefer their 18 year old, which is cheaper. If you want to find out more about this whisky, or perhaps compare the tasting notes, I did a review of the anCnoc 18 year old previously. As for this limited edition peated whisky, the nose definitely matched the mouth. It was easy to drink, so quite dangerous, really. There were plenty of flavours competing, but not one dominating the other, making it a very pleasant union. At just under £80, it is again quite pricey, but I did enjoy it a lot. Plenty of complexity, but a bit short on length; it is here for a good time, but not for a long time! I tend not to be a huge fan of younger peated whiskies, but I have to say I did find this one very nice. As for the place itself, if you haven’t already, try to plan a trip to Knockdhu. I honestly had such a great tour, and if I am up that way again, I’d go back for sure! 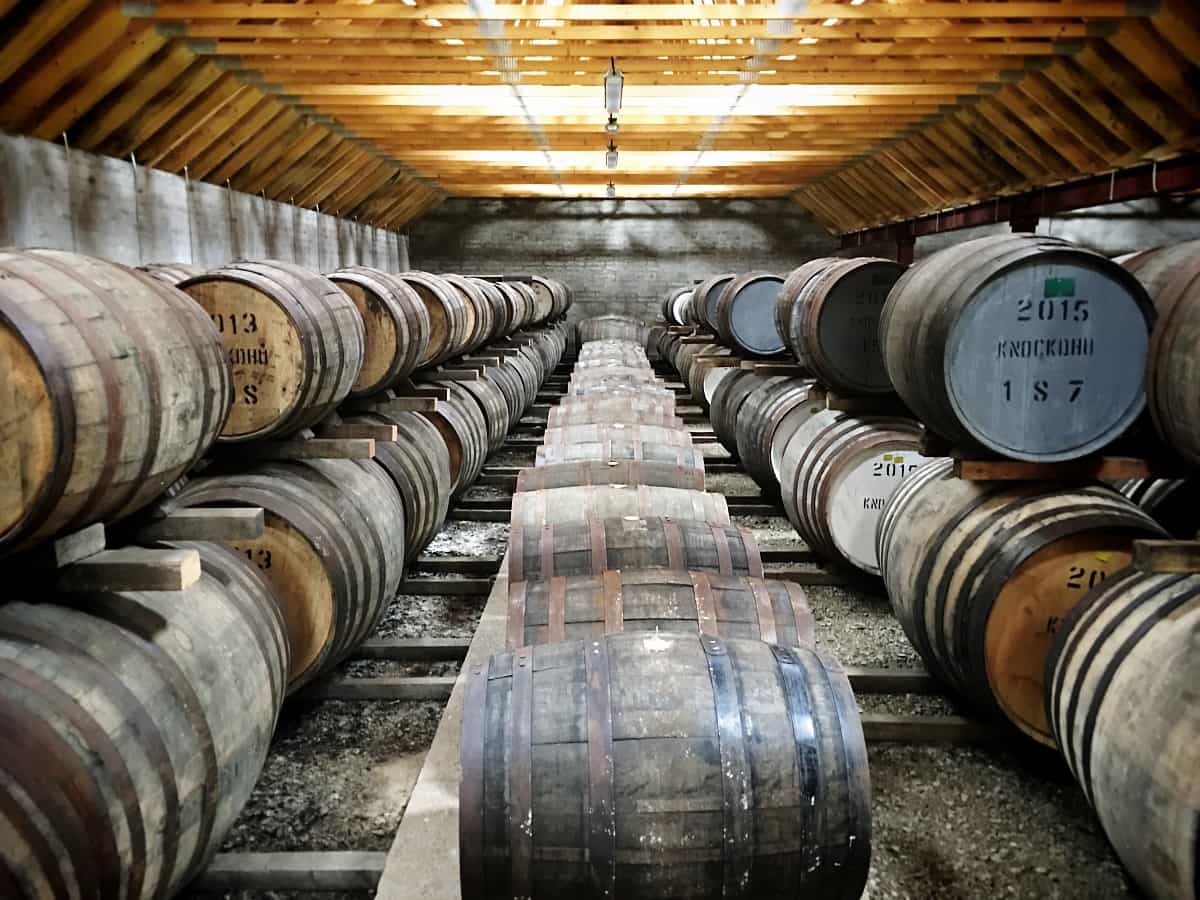