We discussed recently how – in a world obsessed with youth and novelty – whiskey is unique in embracing the moniker “old.” Old Grand-Dad and its stablemate, Old Overholt, collectively marketing themselves as “The Olds,” have taken this concept to 11.

The Olds’ site opens with the sexist tautology that these are “for men who like their whiskey to taste like whiskey.” The rest of the frontpage is a potpourri of weird jokes that don’t really land, all with a heavy flavor of “crotchety old man.” Though long on malarkey, the Olds’ site is woefully short on information, even by the abysmally low standards of whiskey marketing. Per usual, it’s time to roll up my sleeves and do some independent research:

Old Grand-Dad is named after Meredith Basil Hayden Sr., also honored by the Basil Hayden’s brand in Beam’s small batch portfolio. Basil was an emigre from Maryland in the 1780’s, who brought to Kentucky some prior knowledge of distillation, as well as a reputed preference for a high rye mash bill.

The brand as we know it was started by Basil’s grandson Raymond, who in 1882 established a distillery near Bardstown, KY. Seeking to memorialize his forebear, he created the “Old Grand-Dad” label. Sadly, Raymond expired without issue just three years later.

The distillery and the name passed through another set of hands before it landed with the Wathen family in 1899. The Wathens rechristened the operations as “The Old Grand-Dad Distillery Company.” In a stroke of awful luck, the distillery burned to the ground the next year and was promptly rebuilt. It operated until Prohibition in 1919, at which point it was shuttered permanently and eventually destroyed.

The Old Grand-Dad brand carried on, owned by the Wathen family’s American Medicinal Spirits Company, itself acquired by National Distillers Products Company, which later sold out to Jim Beam in 1987. Old Grand-Dad is currently distilled by Beam Suntory, at its plants in Clermont, KY and Boston, KY.

Keeping with the eponymous Grand-Dad’s preferences, Old Grand-Dad is known for its high rye mashbill (on the order of 30%). The current range encompasses the core Kentucky Straight Bourbon Whiskey (43%, $19), as well as the Bonded 100 Proof (50%, $24). The top of the line is this 114 proof (57%) offering, called simply “114.” The 114 reportedly flirted with extinction a few years back but – like another great American old timer – reports of its death were greatly exaggerated.

Via social media and this site’s comments section, I’m frequently questioned by bourbon enthusiasts about where a given bottle sits on the price-quality scale. To establish some context here: this is higher proof than a bottled-in-bond expression, making it perhaps more similar to a “barrel proof” bottling like Wild Turkey’s Rare Breed. It sits between the more forceful members of Beam’s small batch stable, being stronger than Knob Creek (100 proof) but below Booker’s (120+). Price-wise, it is close to Elijah Craig Small Batch, but carries a bottling strength closer to the more expensive Barrel Proof. With all that for triangulation, let’s have ourselves a sip.

On the nose: Nose has a freshly floral aroma to start. There are some caramelized sugar notes that make way for a set of more bitterly spicy scents. Grass clippings, seasoned salt rub, and scoured stainless steel frying pan. There’s a subtle whiff of sarsaparilla and ground cinnamon at the very end of this.

In the mouth: Mouth-puckeringly tart at first. This really has an iron-like stiffness from the beginning to the end of the mouth. All throughout, there’s the burn of high ABV. Around the edges of the tongue you’ve got the spiciness of Big Red chewing gum. Some lightly oaky flavors of vanilla appear as this crescendos in the middle of the mouth. The rye notes dominate the back of the palate and the finish, which is otherwise marked by a metallic aftertaste and some slightly vegetal notes. Overall, this is stern to the point of bitterness in parts.

This isn’t flawed per se, but the exceedingly high rye style is pushed to an uncomfortable extreme here. There’s a nice variety of smells of the nose, but the palate is tightly gripped by a steely fist, yielding little in the way of expansive flavor.

If you’re a rye drinker who prefers your whiskey on the painfully dry side, this might appeal to you. For my tastes, I like my higher-proof bourbons to have an extra helping of sweetness, in order to balance things out. Stagg Jr. is perhaps a good example of this. I hesitate to say so in such a serious forum, but this could be the backbone of a really excellent Old Fashioned or Manhattan.

In all, this is good value for money considering the strength, and especially if this austere flavor profile appeals to you. I’m unlikely to be a repeat buyer but recognize that there’s an audience for this; if it’s you, have at it! 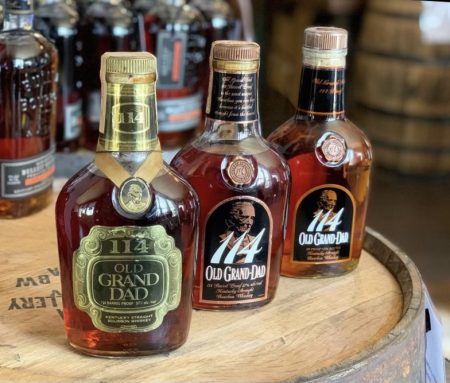