You know that whiskey you’ve been meaning to try but haven’t gotten around to?

I can’t tell you how many bottles of Eagle Rare I have walked by. They might as well have been invisible to me, and it’s not just the transparent bottle. Perhaps the relatively good availability lulled me into a sense of complacency regarding this brand. Originally created by Seagram in 1975 as a 101 proof (50.5% ABV) bourbon whiskey, the Eagle Rare brand was acquired by current owners Sazerac in 1989. The 101 proof version was discontinued in the middle of the last decade, leaving us with the current offering.

This is a Kentucky Straight Bourbon Whiskey, bottled at 45%, with at least 10 years of age on it. It’s produced by a reputable distillery; nay, better, given the halo of the Antique Collection and the association with Van Winkle.

The effects of this consanguinity with trophy bourbons is increasingly felt by consumers, with some retailers jacking up prices for expressions across the Buffalo Trace range (including, astoundingly, Buffalo Trace bourbon itself). I’ve seen Eagle Rare on Instagram for prices approaching nearly triple the prevailing retail price (around $30). Seeking to capitalize on the Pappy and BTAC buzz, disingenuous merchants have decided that any kissing cousins of these expressions are potential collector’s items.

Pricked by my experiences in a decade worth of travel to Japan – where good things demonstrably don’t last forever – I reconsidered my ambiguity towards Eagle Rare and purchased a bottle recently.

Why did I wait so long? If anything, I might have been put off by the jingoistic tone taken by Eagle Rare on the back of the bottle:

“Life, liberty and the pursuit of happiness – the cornerstones of the birth of a nation, epitomized by the American bald eagle. That nation has come to represent the freedom, spirit and independence of the individual, giving the world products and innovations that are uniquely its own. One such innovation was Kentucky Straight Bourbon Whiskey. Early Kentucky settlers created bourbon, the true American spirit, in the late 1700s. By practice, and protected by law, no other distilled spirit adheres to standards as strict as those established for Kentucky Straight Bourbon Whiskey. And few other whiskeys can offer even a glimpse of the great whiskey making found in Eagle Rare.”

Let’s have a go at that ludicrous paragraph. To start, “the birth of a nation” regrettably recalls an early bit of American filmmaking glamorizing the Ku Klux Klan. Is this a dog whistle for the un-reconstructed South, or a bit of lamentably foolish obliviousness? I’d guess the latter, but it’s still an unforced error. As far as American innovations go: I’m willing to rank the airplane, internet, and polio vaccine way, way ahead of bourbon, as much as I may enjoy a drink. Other distilled spirits in the world adhere to standards as strict – or stricter – than those governing bourbon. I could go on, but you get the drift.

Putting politics aside, we routinely eschew the industry’s self-mythologization and lofty rhetoric here at MALT. I’m not willing to buy into internal or external hype, but I am willing to give this a fair hearing. As always, the proof is in the bottle. Let’s ignore the nationalist tropes and assess the whiskey, shall we?

On the nose: Mine eyes have seen the glory of the coming of the Lord! This might be the most cheery nose on a bourbon I have tried. It’s so… good. There’s a wave of creamy vanilla to start. Underlying that is a luscious, juicy cherry at perfect ripeness, with a balanced tart nuance. All this is covered by a gooey layer of melted milk chocolate. I want to make a pie out of this. There’s also undertones of muddy clumps of earth and damp wood, in the best of ways.

In the mouth: OK, back to reality. This is still pretty excellent. It doesn’t reach the point of sensory saturation that Stagg Jr. does, but there’s an all-around completeness to this. At the front of the mouth, you’ve got a tart lick of fruit balanced by an astringent tightness. Between the front and middle of the tongue, this lapses into a watery dirtiness that fails to engage, which is the only real flaw evident here. But wait! At midpalate, that all yields to a tart fruitiness that transitions to a lingering, hot mouthfeel that asserts itself way above the ABV. Long after the last swallow, a chocolatey-dirtiness subtly re-emerges throughout the mouth.

This is a shapeshifter and a temptress, offering delights and then withdrawing them, proffering others in turn. It marries sugary and fruity richness with some earthy sous bois elements. It is the product of a long maturation and – at least at MSRP – offers good value for the price. While I wouldn’t go quite so far as to say that it makes me proud to be ‘Murican, it definitely makes my list of repeat purchases in the bourbon aisle… while supplies last.

Photograph kindly provided by the Whisky Exchange. And there are some commission links above. We tell you this so you know. 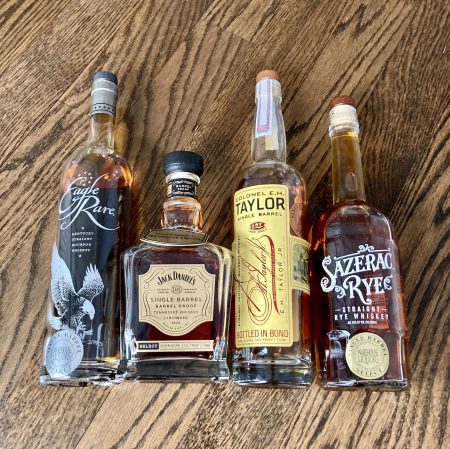