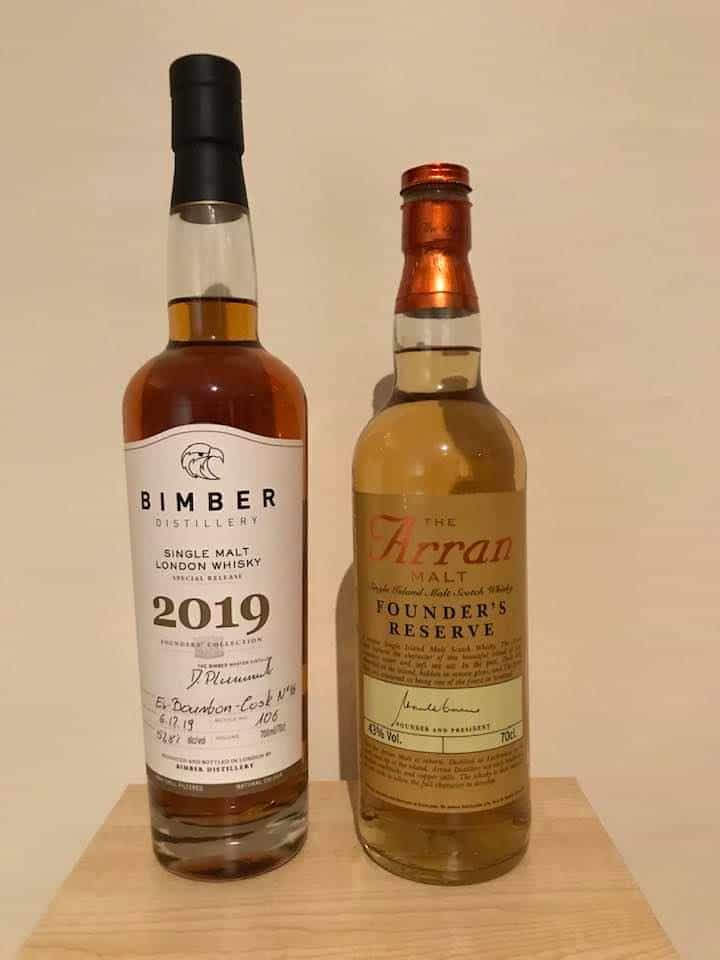 I never had a lightning bolt moment with whisky. I did with wine – not even something particularly fancy; a cupid’s arrow in £10 Rioja Reserva form – but when it came to whisky there was never a “bottle that did it”. I remember being a stammering, awkward fifteen-or-sixteen year old with a vague notion that single malt would be something simultaneously urbane and visceral and somehow, therefore, to be respected, and I remember being twenty and arguing the sundry merits of Balblair with a university drinking pal, but the journey from one to t’other must have been an incline so shallow that I didn’t notice myself slipping until I was at the bottom. Whisky was just sort of always there; there was never a moment of sudden, revelatory discovery. I think, as Mark eloquently suggested a few years ago about his own journey, that I was so sold on the idea of whisky that the point at which it became a real love for the thing itself simply passed me by.

Much of that will have been thanks to my father. He was one of the outliers – the oddballs who drank single malt through the eighties and early nineties when nobody gave a damn and you could buy Port Ellen for fifteen sheets. Not a hifalutin obsessive like me, you understand. Not a collector or a wonk or a dilettantish one-upsman. Just someone who loved single malt and was, I suspect, a little surprised that not many other people seemed to.

Which was why, when the Scottish island we always visited on holiday opened a distillery, his interest was piqued by their unusual fund-raising concept of a founders club. These days, of course, founders clubs are ten a penny. Almost every startup distillery has something along their lines; they’re a good way to build a small, dedicated following from the off, and they bring in a bit of much-needed early revenue. But when Arran launched theirs in the mid-nineties, it was revolutionary and new and, given the parlous state of whisky in the fifteen years preceding it, a hell of a gamble.

But it paid off. The single malt revolution grew apace, Arran survived and thrived, and my father got his ten cases of their Lochranza blend as well as, in 2001, ten cases of Founders Reserve single malt aged about five or six. I don’t remember what he paid for them – though he did remind me recently – and I’m not going to ask him again because the answer would make me cry and grind my teeth. The upshot was that there was always Arran single malt in the house, growing up. At least a few bottles stood guardian angels through university, and childhood holidays would, from time to time, include a tour around the Arran distillery. (My two abiding memories are of watching, mouth agape, as my father gave the right answers in a blind tasting, and of a stuffed mouse in the corner of a now-long-since-disappeared atrium display of barley.)

The point of all this woolly nostalgia is that founders clubs are, inherently, a display of blind faith. You don’t join them expecting to become the recipient of the world’s best whisky. You don’t join them to make huge profit (though I suspect there may be a handful of flippers who prowl their perimeters these days). You join them, fundamentally, because you give a damn. If my father hadn’t given a damn, you wouldn’t be reading this now.

Honestly? Increasingly often I struggle to give a damn myself. Certainly enough of one to be bothered to pick up a pen. There are several reasons my writing now trends in an increasingly cider-faced direction, but one of the most significant is that, when writing about cider, or talking about it online, there is a sense of walking through a field of unplucked flowers. Everything is fresh and new and often suffused with genuine optimism; when I pen an article or speak to a producer I frequently get the sense that we are covering ground that genuinely hasn’t been covered before; that we are filling in blank space on a map. Quite simply, it brings me joy.

Whisky? Well, if you have a strong constitution, or want a laugh at my expense, read this. It’s the first article I published about whisky, back in 2015 on my own now-long-defunct blog. It’s empty, airy fluff, of course it is, but amidst the emetic prose and appalling aesthetics it’s impossible to miss a tangible, shiny-eyed hum of innocence and real, unconditional love. And somewhere in the last five years – I’d put it early 2018, other people might put it a little earlier – it curdled and hardened and changed its shape; the innocence sputtered and slipped away, the love took on an edge and a caveat. I don’t write articles like that first one any more – all to the good, of course; I wouldn’t have the Malt gig if I did – but it’s difficult not to think that something, however feeble and wispish, has been severed that was comforting and safe. I don’t engage much with whisky twitter now and I spend as much time pointing out whisky’s faults as I do celebrating its virtues.

This Christmas one of those warm, uncomplicated moments fluttered back. I was visiting my parents and, for the first time, my father and I sat down with a bottle from his Founder’s Club and a bottle from my own, Bimber’s, that I joined last year. No notes, obviously – it was Christmas, for goodness’ sake, I’m not a monster – just tasting and talking and putting the world to rights.

But looking at the two bottles again in the cold light of late January, I can’t but be struck by the development, the huge strides forward in whisky fanaticism – geekery, if you like – that they represent. Let’s consider Arran’s production statistics for the moment (what few we know of them). I have no idea where their barley came from, or what the variety was. Fermentation, when I visited Arran last, was under fifty hours, which isn’t long at all. I’m not sure about yeast strains, but I’d bet my last penny that it was a fairly standard-issue distiller’s yeast. I’m not even sure from the bottle what sort of casks it matured in, though again, I can make an educated guess, and there may be some long-filed-away letter to my father offering an answer.

Compare that to my Bimber, bottled a couple of years younger, at cask strength from a single ex-bourbon barrel. I know more or less everything there is to know about this whisky, Genesis to Revelation, because I’ve written up most of it on this site. I can put you in the field the barley was grown, tell you where and how it was malted and mashed, talk you through the three-times-longer fermentation (right down to the temperature of fermenting) as well as the done-to-taste cut points and the ridiculous wood policy. Most importantly, I can tell you why every part of that puzzle ramps the quality of the resultant whisky up a notch. I joined Bimber’s Founder’s Club principally because it didn’t feel like much of a gamble at all; rather a pretty cast-iron guarantee that I’d get four first-class whiskies for my pound of flesh.

That this Bimber exists is down to a culture of appreciation fostered largely over the last twenty-five to thirty years. A culture pointed towards in no uncertain terms by the staggering optimism of Arran’s founders and the love demonstrated by the members of their club. When my father joined, the notion of a whisky distillery in London would have been as utterly risible as the idea of two million hits in a year on a website dedicated to amateurs examining the minutiae of whisky’s more arcane processes.

The fact that both exist today evinces a quantum leap in care and consideration – from makers and drinkers alike. And whilst I can, and do, drink and love both whiskies, surely to trumpet the excellence of the Bimber over the Arran, to point out the advancements and improvements in production and craft, is to fully and properly recognise and celebrate just how far whisky, at its best, has come?

Anyhow. Two glasses to examine. Arran definitely takes the value laurels – Bimber’s club cost £395 to join for four bottles and a selection of other goodies. Call it £80-£90 a bottle once the sundries are ironed out. Whereas Arran’s seem to have averaged around a smile and two groats a pop. (Or whatever currency it was we were using in the nineties.) 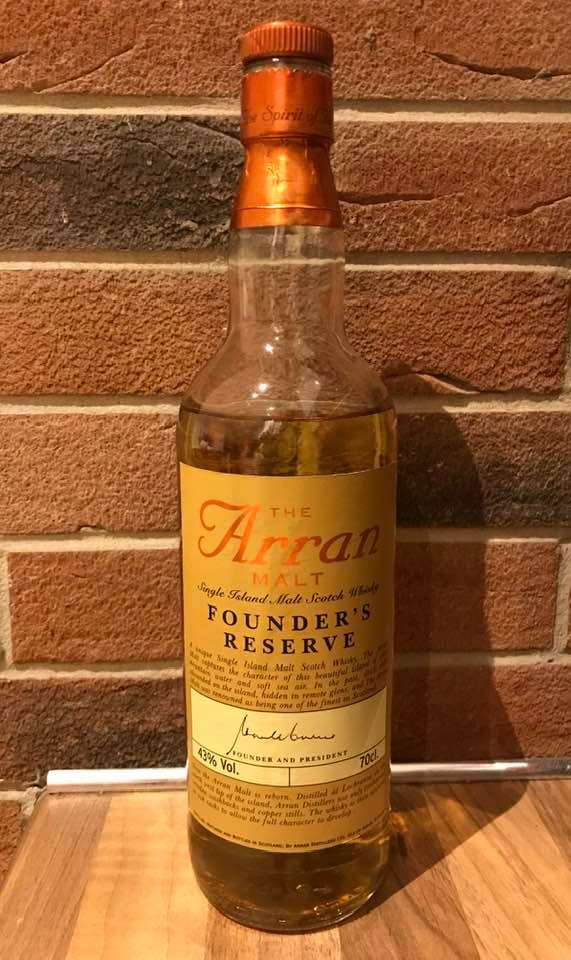 In the mouth: That lively, piquant vibrancy continues on the palate, with perhaps a shade too much prickle. Cut grass, hay and white pepper. Vanilla and soft pear. There’s still that mineral crispness – seashell-like. I have Chablis ever so slightly in my head, but perhaps that’s just suggestion. The youth of this whisky tugs at your tongue a little, but malt loaf, sponge cake and a smatter of nectarine keep things rounded. It’s clean, simple, attractive fare, not overworked with cask-finishy fandangling, and there’s something very admirable in that. 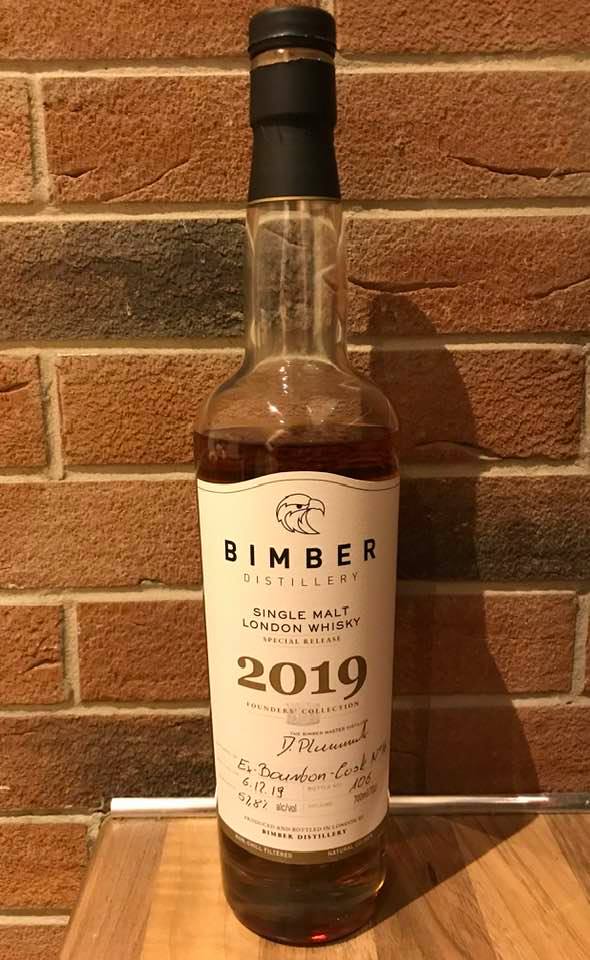 On the nose: Just oozes over you. It’s a nostril-massage, so big and ripe and harmonious and balanced in its enormousness. Huge, fruity esters – ripe orange and mango and peach and passion fruit meet toffee caramel and coconut and crême brulée. Simultaneously decadent in its depth yet pulsing with life.

In the mouth: Not sure malt whisky gets more unctuous than this. Massive, fat, oily texture dripping with caramel and fudge and treacle tart alongside baked apples, rich vanilla and honey. It all sounds rather too sweet, I know, but the structure provided by body and alcohol keeps things on an even keel. Ridiculously, at nearly 17% higher, its alcohol feels more integrated than the Arran’s does; depth and intensity and body are such that the booze and the youth simply flit by. Everything’s so weighted and clean and clear and pillowy-fulsome. In many ways it feels like whisky’s answer to Foursquare 2005, and I have scored it accordingly. Comfortably my favourite Bimber to date, which really is saying something.

Bimber, I think – I hope – is the future. In fact I gave the geophysicist a taste without telling her what it was and, after miscellaneous peals of pleasure, she said “this seems like a very modern whisky. In the good way, not the bad way.” Which struck me as a more incisive and intelligent comment than you’ll find in 99% of tasting notes (my own included) and more or less precisely on the nail for this article.

Arran’s Founder’s Reserve was a first step. A wonderful thing to have and to look back to, and a perfectly tasty thing in its own right. Coming back to it after a few years I have scored it more highly than I expected I would. But surely those of us who drink whisky, who want it to be better, who want to love it more, would want every next step to take us forwards, towards the green light, into the uncharted spaces on the map, into the meadows of unplucked flowers.