Treat yourself. If you were going to splurge on a pricey whiskey just for you, which one would you choose?

We’ve all got that bottle of which we’re especially covetous. For those of us able to muster a modicum of self-restraint, the purchase of these expressions is reserved for a special occasion: a milestone birthday, perhaps, or an anniversary if your significant other shares your love for whiskey (mine does not but has many compensating strengths, none of which spring to mind at the moment).

In my case, the catalyst for this act of self-indulgence was the decidedly more minor occasion of the annual bonus payment hitting the bank account. In the years when I make out better than Clark Griswold, I usually spoil myself in a small way. Typically, it’s something nicer than I’d normally get, but with a price tag falling far short of a sports car or a first-class vacation. Thus, after checking my balance, I headed into the locked whiskey vault at Binny’s and gazed upon the rare and dear bottles there assembled. Bypassing manifold temptations, I went straight for the chunky crimson box containing the subject of today’s review.

I have had my eye on this particular Wild Turkey expression for a while. Ever since my inaugural exploration of seven varieties from this storied house, I have been curious about the premium offerings in the Master’s Keep range. Comprising the Cornerstone Rye, the Decades commemorative, a 17 year old bourbon, and this Revival expression, these are the prestige members of the rafter of Wild Turkey bottlings, with price tags to match.

My desire only grew when our friend David Jennings, who has tasted more Wild Turkey than anyone not named “Russell” (and probably more than all but three of those), called this a personal favorite. He noted that he bestowed a 5/5 score on this expression, the only time he’s given a modern Wild Turkey full marks. The meticulously-researched review on David’s site warrants a read, of course. As always, I’ll defer to him and his considerable expertise on all matters related to Meleagris gallopavo.

So, what is that makes this different and (hopefully) better than a plain old bottle of Wild Turkey bourbon? Time for some facts, before the real fun begins: this is a blend of Kentucky straight bourbon whiskey aged 12 to 15 years in conventional oak, before undergoing finishing in sherry casks. The detail-oriented among you (howdy, lawyers!) will realize that this finishing means the end product is no longer able to be called bourbon, for the purposes of the TTB. Regardless, it is bottled at 101 proof (50.5% ABV), a number which will have resonance for Wild Turkey enthusiasts. This particular bottle carries the code LL\GD0191430, meaning it was bottled on 4/9/2018 at 2:30 PM.

While sherry cask finishes are nothing new in the world of Scotch whisky, they’re comparatively rare (though rising in prevalence) over here in bourbon country. Breckenridge of Colorado offers a PX cask finished expression of their own bourbon. Angel’s Envy has as entrant in the category, utilizing sourced bourbon. J. Rieger’s Monogram limited edition was a blend of sourced corn and rye whiskeys finished in a sherry bota. Belle Meade released a sourced bourbon (initially 9 years old, though now NAS) finished in Oloroso casks, reviewed here by Jason.

In that review, Jason noted the danger of cask finishes, namely that they’re principally utilized to cover up flaws in the underlying whisky. While this may be true in Scotland, the practice Stateside seems more aimed at creating a USP for the same sourced whiskey being offered by every other would-be craft distiller.

Of course, the veteran Scotch drinkers in the crowd will roll their eyes when reading the accompanying materials about the “20 year old Spanish Oloroso Sherry casks that Eddie personally hand-selected.” This echoes the “only the finest” tag line that is used and abused by so many producers who are demonstrably utilizing less than the best casks that Spain has to offer.

Call me gullible, but I’m prepared to give a bit more credence to Wild Turkey’s claims in this case. It’s not as though they’d have a hard time moving a Kentucky Straight Bourbon Whiskey with a 12+ year age statement; as David noted, secondary market prices for bottles of this type would argue for a yet higher price than the MSRP for this expression ($150; I paid $160 for my bottle). The Whisky Exchange will sell you a bottle for £175 if you’re interested.

Those of you who have already clicked away to David’s article will know that this is designed as a tribute to a 2004 expression entitled “Sherry Signature,” which was finished in Oloroso casks and had some sherry blended in. This was a Jimmy Russell invention, with the Master’s Keep homage being created by Jimmy’s son, Eddie. Given the universal regard for these gentlemen in the world of Bourbon and their reputations for craftsmanship and stubborn integrity, I am further dissuaded that this is a ploy to move some substandard inventory.

Having not personally tasted the inspiration from 16 years ago, I’ll have to use my imagination as I now experience this. Here we go…

On the nose: On first opening, this is hugely expressive straightaway. The obligatory dried fruits meet a bit of funky rubber and ripened cheese. I’m getting all manner of exotically woody notes in here; tasted blind, I might have even pegged this for the incense-and-five-spice-inflected accent of mizunara casks. There’s an umami note of soy sauce and, hiding at the periphery, a lightly sweet scent of candy wafers and banana taffy.

I left this open for a few weeks and then revisited it. The funkiness is still there but has mellowed into more of an old leather scent, like a well-worn Chesterfield armchair. The piquantly spicy notes are more pronounced now; this is a Kentuckian speaking Japanese with a Spanish accent. There’s an additional vinegar note here, the first time I can recall smelling this on a whiskey of any type. The sweetness has become more airy, with the nasal texture (just made that up) of confectioner’s sugar and cotton candy.

In the mouth: Again freshly opened, this starts with a surprisingly austere mouthfeel, especially given how ample this is on the nose. It’s immediately stony, leaning towards a pert note of peppermint. This carries over into the middle of the tongue, which is numbed by a tingling sensation that I more often associate with a 6-handle on the ABV. Prickly, spicy wood notes crowd the back of the tongue. The funky rubber lingers as an aftertaste that sits at the rear of the mouth, periodically lapsing over into the flavor of black licorice.

After a few weeks, this has evened out significantly. The firm texture remains at the front of the mouth, which now transitions to the midpalate with a dry note of fireplace ash. The heat is more manageable now and no longer crowds out the flavors in the middle… and what flavors there are! Cherries, a hot lick of cinnamon hard candy, and Memphis BBQ sauce all make appearances. This tightens up again into the finish, which is marred by none of the funky notes from a few weeks back. Rather, a citrus-accented stoniness makes way for a dusty and ashy note that transitions more seamlessly into a mild and pleasant aftertaste of anise. There’s an exceedingly subtle flavor of dark chocolate that lurks around the back of the mouth for a minute or more following the last sip.

This was a gut punch at first. I couldn’t believe how clumsy the overlay of the sherry casks felt, and (based on all the funky notes) they seemed far from the freshest examples of that genre. However, this isn’t my first rodeo, and I knew enough to wager that some time and air would likely work in this whiskey’s favor.

Patience was rewarded with a whiskey that – while not a million miles away, flavor wise, from the original – had improved significantly in terms of balance, harmony, flow, and texture. It proved itself worthy of a special occasion, and I have a few guests in mind for whom I’d bring this down off the top shelf.

The moral of this story is: there are whiskeys worth saving for a special occasion, but you might find yourself disappointed if you wait for the special occasion to open them. If there’s a date in mind, pull the cork a few weeks early and give it some time to breathe. Here’s to you, and whatever you’re celebrating!

There is a commission link within this article, but as you can see, it won’t affect our judgement. 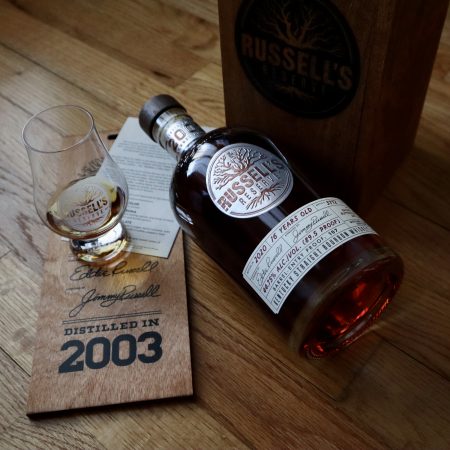