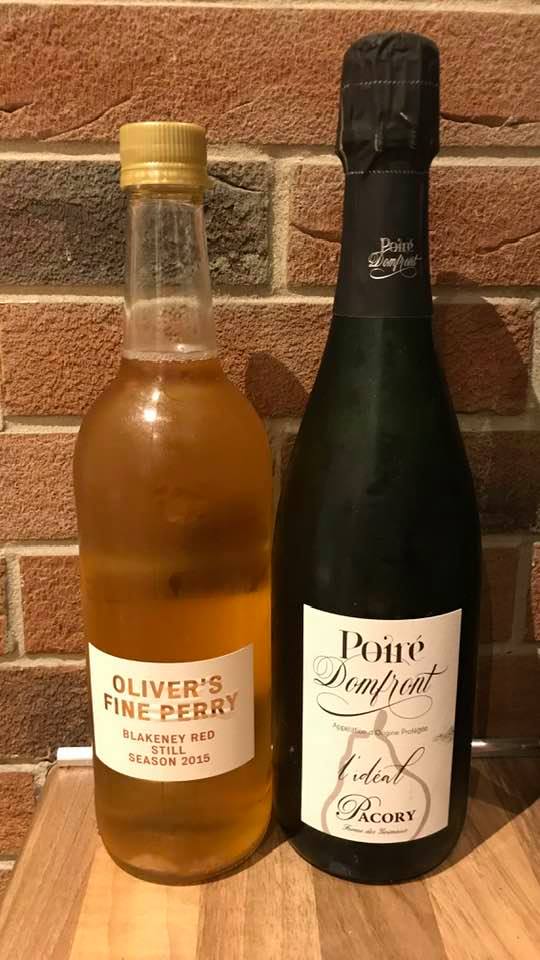 Perrymakers, it seems to me, are a particularly idiotic bunch. Idiotic, or a few pips short of a full pear, or just as stubborn as a mule on bath night.

Without exception, every time I have talked to one of them – any of them – about their raison d’être, they have rattled off a list of very good reasons to sack the whole thing off, burn down the perry orchards and spend the rest of their life doing something less thankless, like PR for the Trump administration.

Firstly, the pears. Forget the big, fat, juicy ones you eat. Perry pears are tiny, granite-hard, misshaped ping-pong balls that hate you and want to see you suffer. So, to start with, they grow in the upper branches of tall, thorny trees that’ll scratch you up worse than the neighbour’s cat if you’re presumptuous enough to try and harvest one. What’s more, they don’t really start ripening properly until about thirty years old, by which time you’re dead or arthritic or have just stopped caring. “Plant pears for your heirs”, is a popular saying in south west England, which one can only assume translates as “this’ll teach the ingrate little toerags, and good riddance.”

But let’s say you’ve planted the tree, waited three decades, avoided all the pests and frost and blights and cankers that can stuff your vintage before it’s begun. Well then, you’d better keep a sharp eye fixed on your pears, because their ripening rate goes along the lines of: inedible … inedible … inedible … inedible … perfect-for-about-two-days … oh-you-missed-it-now-they’re-rotten. And, just for a couple of extra knives in your back, they’ll ripen at different rates, often despite sharing the same branch, and if they have gone rotten, you may well not notice because it often happens from the inside out. Yummy.

The catalogue of woe goes on: some pears need instant pressing after harvest – not ideal if you don’t have your own orchard. They’re slimy to press, demanding constant cleaning of equipment, and if you’re using a belt press there’s nothing pears like better than clogging it up. Because of the metabolic pathway between citric acid and lactic bacteria you run a good risk of your perry going acetic, even if you’re scrupulous about keeping it from oxygen, and the flavours of fermenting perry can rocket in a brain-manglingly short space of time. It can taste delicious – perfect – just right for bottling, then you leave it a week and it’s gone. Oh, and whilst this isn’t an issue of taste, it can go cloudy in blending or post-bottling, which instantly puts less-clued-up consumers off for good.

Put a perry – a really good perry, made by someone who’s taken the time to understand the pear’s potential – in pretty much anyone’s glass, and you’ll watch as their world lights up. “It completely takes them aback”, said Tom Oliver, when I spoke to him last September. “And with food, I think it’s an absolute winner. When the match is right, people won’t go back to eating that food with wine”.

For all the hand-wringing capriciousness and frustration of actually whipping the stuff up, perry is quite simply one of the best drinks that fermentation can produce. And I say that not only as a wine obsessive of many professional years’ standing, but as someone who – whisper it – doesn’t think very much of pears as a fruit for eating.

By turns scintillating, unctuous, honeyed, tangy, rich and feather-light, it’s as happy being still as it is sparkling and, thanks to its citric acid, is a far more vinous drink than cider, even at the finest end of its spectrum, tends to be. Completely dry perries don’t exist, thanks to an unfermentable sugar called sorbitol in a pear’s chemical makeup, but several English bottlings, particularly from Ross, are as close to dry as makes no odds. Napoleon called it “the champagne of the English”, and at a blind tasting I held with wino workmates it was a perry that took the popular vote at the end of the evening, ahead of an outrageously good champagne-method cider and probably one of the best ice ciders in the world.

The final snarling injustice of perry is the difficulty in actually shifting the stuff. If all was fair, the best perries of Herefordshire and Somerset; the Olivers, the Downsides, the Gregg’s Pits, the Burrow Hills, the Bartestrees, the Ross-on-Wyes, would be hailed as some of the best liquid bottled not only in the UK, but in the world. Instead it remains the preserve of weapons-grade wonks and those fortunate enough to have stumbled upon it by chance. And mainstream consumers, if the word “perry” strikes a dim and distant chord at all, associate it with vile babycham or fraudulent, masquerading “pear cider”.

To my mind the drink deserves better. Deserves wider recognition and far more appreciation. I’d bet the geophysicist’s house that if the handsome-and-wise Malt readers tasted a great perry, they’d be hooked. Because, more than any other drink – perhaps more even than whisky – great perry can only be made by people who really, really, give a damn. Rarefied folk who are prepared to endure the heartache and the thousand natural shocks that perrymaking is heir to. Because, quite simply, it’s worth it.

With that in mind, allow me to introduce “perry pairs”. The first in what I hope will become a monthly-ish series for interested drinkers enamoured of perry and puns. Very simple: reviews of two perries at a time that stand out either for differences or their similarities. And if, by December, you’ve not tried at least a couple, then I’ll give up and you can all go back to Kopparberg Pear Cider.

For todays pear pair I thought I’d take a perry from two of the drink’s three heartland regions. My apologies to Austria’s Mostviertel for the snub, but there’s none I can get my hands on in the UK. And, for my money, England’s Herefordshire and Normandy’s Domfront would just about squirm in as the world’s top two in any case.

Domfront, as I learned at the CidrExpo, is dominated by one pear in particular: Plant de Blanc. Indeed for a perry to bear the Domfront AOP, Plant de Blanc must comprise at least 40% of its makeup – in reality they tend to be at least 60-70%, often going up to 100. This has the knock-on effect that many AOC label Domfront perries display a similar palette of flavours, with differences deriving from terroir, production and age. But since most Domfront producers make at least a few non-AOC perries, these rules certainly don’t seem to have bred homogeneity.

I asked my French cider insider, Camille, for a few words on the Plant de Blanc and she obliged with: “Plant de Blanc is queen. The most complex of all and the spine of Domfront (don’t try to eat it raw though!) It brings to a perry cuvee all its roundness, lightness and lively effervescence. It has those particular fruity, floral and citrus notes which can also tend towards honey, lychee and candied fruits. Drink it in a champagne flute with oysters of a handmade lemon pie and it will make your day, trust me!”

In Hereford it’s a very different story, and I dare say that picking out just one variety will lead to a ticking off from at least one producer. I could have gone with the brisk and thrilling Gin pear, the intense, acidic Thorn or one of the sundry delicious-but-horribly-named Huffcaps. I could even have gone – and I want no sniggering at the back, thank you – with the aromatic and well-structured Butt. I said no sniggering.

But I’ve gone with Blakeney Red, because it seems to me to be in many ways the pear-of-all-trades. Fruit forward, plump, ripe, not too much of everything. I’ve heard Tom Oliver refer to it separately as the Dabinett and the Yarlington Mill of the pear world, suggesting that it does a very good job of ticking most of the boxes. “Nice, soft tannin structure, some viscous, fleshy pear notes with understated honeyed succulence,” was how Tom described it. “Good citrus aspects with elderflower, melon and lychee notes. Subtle but complex. Great as a blending base or surprisingly good single variety”. An eye-catching amount of overlap with Camille’s description of Plant de Blanc.

Before they both completely steal my tasting note job, let’s move on to the two perries in question. In the English corner, Tom’s own still, off-dry 2015 Blakeney Red. Facing it from across the channel is Pacory’s l’Ideal. A single-variety Plant de Blanc naturally carbonated through the champagne method. Prices? The usual joke. £5.70 for a 750ml bottle of the Oliver’s and about €10 for the Pacory. Though lord alone knows what €10 translates as, these days. Sixty quid or so, I dare say.

On the nose: Nothing understated about that honey – it’s the purest, most unmistakeable you can imagine. Spliced with lime and toast and white flowers and melon perhaps, but the overall oozing, decadent, irrefutable whoop is HONEY! Big, pillowy aromas with just a teensy nudge of oak-induced oxidative nuttiness at the very edges.

In the mouth: Less of a honey monster here – the citrus fruit takes a firmer hand with mandarin and lemon, but still that gorgeous, rich honey and toast and chopped nut development holds sway. My goodness it’s good. Mature, yet fresh; the most convincing Savennières impression a perry has yet done for me. Perhaps just a tiny touch down on acidity if I’m being picky (and I always am). 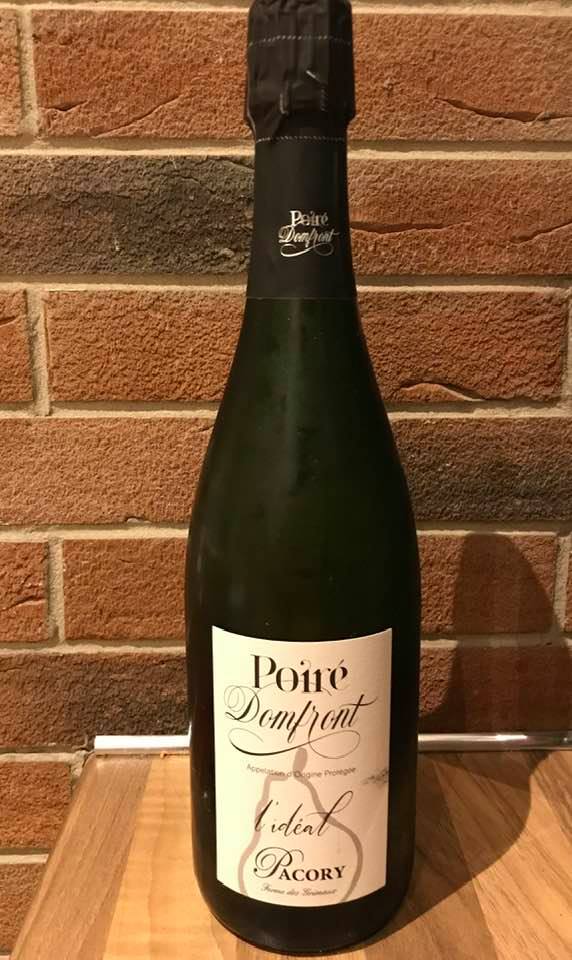 On the nose: More zingy and citrus-forward than the Oliver’s; lighter, tangier. Bounds from the glass on its trampoline of mousse (which does, it must be admitted, get a bit insistently up your nose for the first few minutes). Elements of autolysis show themselves in nuances of raw dough, sourdough toast and wet-slate minerality, but mainly we’re talking bright green pear, acacia and lemon.

In the mouth: Incredibly brisk and fresh and lilting; deliciously integrated acidity and carefree, frothy mousse hiding the sweetness a little. Dabs of vibrant grapefruit and tropical pineapple jab through the riper pear and autolysis. Refined yet joyful at the same time. Shows none of its years – there’s so much potential ageing still in the tank. Aperitif royalty.

I don’t know if you’d describe these perries as quite the opposite ends of the spectrum, but they’re certainly occupying dramatically different spheres. The Oliver’s is a bigger, chewier, more complex creature and deserves to prop up one of your more pretentious dinners. Whereas the Pacory should be what you greet your guests with at the door, before spending several minutes agreeing how much better it is than any prosecco ever, and how intelligent you are for having bought champagne method perry instead.

They’re a nice demonstration of the truism around single varieties; both have qualities that would likely enhance the other, be it the rich fullness of the Blakeney or the refreshing tang and joie de vivre of the Plant de Blanc. But again, I’m being picky – these are both superb as they are. Don’t expect me to treat you like this every month.

I dare say I should pick a favourite here, since I haven’t yet started applying Malt scores to my cider and perry reviews. Cravenly I flitted backwards and forwards between the two of them throughout tasting, perhaps spending a fraction more time in the Oliver’s corner than the Pacory. The geophysicist and our friend had similar experiences in the other direction though, so my advice remains: buy both on sight. For under a tenner a bottle each, there really isn’t much more fun to be had.

Thanks to Tom and Camille for taking the time to talk to me about these two varieties.