Take a look at the top-selling blends and you will quickly realise that Transparency has got nothing to do with their success, popularity or loyalty. I’m not talking Terroir here, even though it has superseded transparency as an all-encompassing term. I’m talking strictly blends and the information on the components of the blend.

Now, take a look at your own whisky collection. Pick the top blends from your stash and check how many of them provide you with information other than marketing and the mandatory technical information? What! You don’t blend you say? If you don’t blend then you are doing yourself a great disservice. Now, for those of you who do, check how many of the same producers have detailed information about their blends on the bottle or their website? I guess the answer to both would be not as much to none. But are these good whiskies? I guess the answer would be a certain yes. Given that as it may, are there enough of us actively seeking this kind of information for the producers to actually care? Does this information make it a better whisky? In my book, not necessarily. This brings me to Compass Box and its founder John Glaser.

Compass Box is a Boutique blending house and has successfully premiumised blends, in what is largely a mass market category. By premiumising, I mean not just attractive livery and story telling (which they do very well), but also the use of excellent malt and grain components in the build. It was John’s conviction that blends if (and that’s a big if) constructed well can be placed on the same pedestal as a good single malt. Something we would all agree on.

In 2015, he locked horns with the SWA & EU and this time it was on transparency. Previously he got a rap on his knuckles from the SWA for using inner staves (french oak) in the maturation of Spice Tree. Coming back to 2015, regulations prohibited Compass Box or any other producer to share age statements of the various whisky components used in their blends. Enlightenment was released as a response to SWA & EU’s stance and followed this up with a Scotch Whisky Transparency campaign, which was joined by Bruichladdich as well. I signed up too. But no, the floodgates of transparency were not raised. So, the regulation still stands and below is the response received from Compass Box to all those who signed up.

‘As you may be aware, despite our best efforts to change the UK & EU laws through our Scotch Whisky Transparency campaign, currently the only way for us to share information about the age of the component whiskies used in our blends is in response to a direct request for information from an interested party. Moreover, to ensure full compliance with the relevant regulations we are asking those individuals we share this information with to treat the information as being for their eyes only. Specifically we ask that you please do not use the age information provided below in any promotional format or share it in a public forum with others (via blogs, tweets, facebook posts etc.)This will help avoid any claims being made that Compass Box are trying to ‘promote’ the ages of our whiskies through third parties by sharing the information with them in the hope that they will share it with others. This is not our aim.’

Thankfully, those confrontational campaign days are long a thing of the past and Compass Box have moved on to what they do best i.e. craft good blends.

On to the review, the Enlightenment is a limited edition malt blend of Clynelish (48.2%) a Compass Box staple, Glentauchers (36.7%), Balblair (10.8%) and Mortlach (4.3%). All malts were matured in First-fill bourbon casks with the exception of Mortlach which was matured in a rejuvenated bourbon cask. 5992 bottles were released at 46% abv in 2016. This has sold out since then. I paid £80 for it.

Moving on to the Double Single, the idea of creating a blended whisky from just two components came from a session with Duncan Elphick and Tatsuya Minagawa of the famous Highlander Inn on Speyside in 2003. In 2010 as a part of Compass Box 10th anniversary celebrations they brought back Double Single which was originally launched as a small one-off expression in 2004. The original recipe consisted of two whiskies,18 yo single malt from the Glen Elgin distillery (76% vatting) combined with a single cask of 21 yo grain from Port Dundas (24% vatting) which was released at 53.3%. For the third edition which I’m reviewing the Port Dundas was replaced by Girvan. The vatting ratios were tweaked to 72% & 28% respectively. Both have received re-charred ex-bourbon barrel maturation and was released at 46% abv with an outrun of 5838 bottles in 2017. It is still available at HTFW for £139.95 and at Nickolls & Perks for £143.95 if you are feeling particularly rich. I received this bottle as a generous gift from my dear friend Prem Raheja. 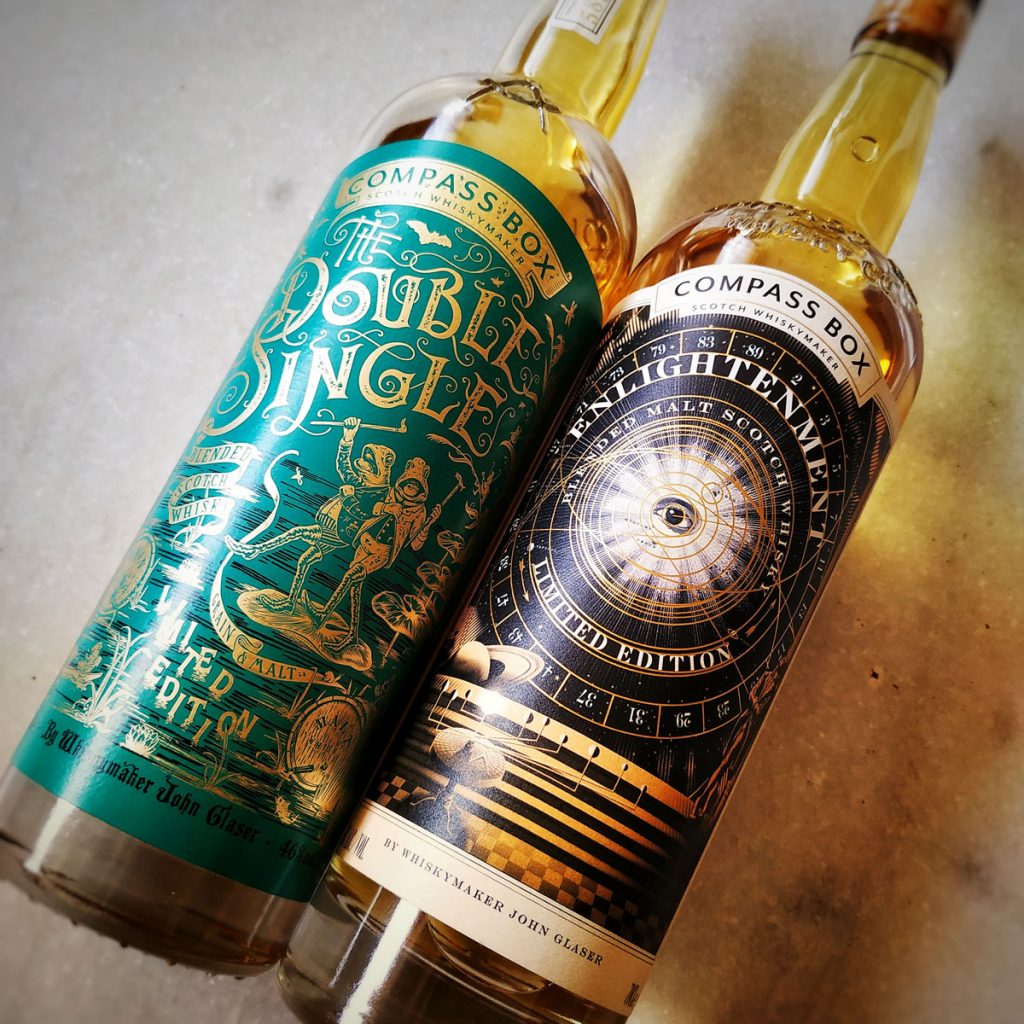 On the nose: Very fresh. Watermelon, sweet lime followed by red and green apple crumble. Very fruity and sweet. The grain makes its presence felt with vanilla and a boiled confectionery note. A little rest brings out rum and raisins. Water brings out more citrusy notes of sweet lime and gooseberry. Also highlights a touch of wood char. But it’s primarily the Glen Elgin singing which cannot be a bad thing.

In the mouth: Vanilla, honey and warm baking spices. It is not as fruit forward as the nose. Custard, lemon tart, dried rose petals and a rum like mouthfeel. The grain is a bit more assertive here. There is the fruity element but in the background. On the mid palate there is a bitter woody note presumably from the recharred cask which extends to the back of the throat. Water makes it vegetal even though it reduces the bitterness. I would avoid dilution. Overall development is very subdued and the finish is dry and woody.

On the nose: Very fruity. Musk melons, overripe plums, red apples. Green apples and pears drizzled with honey and cinnamon. Dusty vanilla and unsurprisingly, beeswax. With a little rest there are subtle sweet earthy notes of Mukhvas which is a typical Indian mouth freshener and digestive made from toasted fennel seeds, aniseed, split cilantro seeds and dill seeds. Chocolate and orange waft fleetingly from the glass. No significant improvement with water.

In the mouth: Follows the nose in perfect sync. A walk in a fruit orchard with foliage et all. Red and green fruit puree in a glass with baking spices. The waxy Clynelish character is a lot subdued on the palate. The mouthfeel is thin and it skids across the mid-palate. With a little rest, mild bitter oak and spices keep the sweetness in check. Water murders the composition. Highly avoidable. The finish drops off a cliff.

Well, the Double Single is no Simon & Garfunkel. The nose sings much better than the palate. On the palate, the delivery was rather straightforward. I have revisited this whisky on five occasions and each time it begins on a very promising note and then flatlines as you give it more time. It’s all well rounded and easily quaffable. But it lacked the exuberance of the nose. There isn’t a lot of complexity or layers. For me the duet was sans the “Wow” factor especially when you consider the princely sum of £145. That is a lot of money for any type of whisky in my opinion, irrespective of its composition. At that level you are rubbing shoulders with the likes of Johnnie Walker Blue Label (which I’m not a fan of) minus the bragging rights.

Enlightenment on the other hand is a fun playful blend. Very fresh and refreshing. Nose and palate follow each other. I liked the way it evolved in the glass, the progression moving from fruit to earthy spices and bitter oak. In that sense it does offer more than the Double Single at a much affordable price point. A perfect sundowner on the rocks.

Both the blends are quite similar in their profiles. Fruit forward with spice and honey. I can see why these would be immensely likeable. These are “safe” compositions designed for what blends usually aim to be crowd pleasers. And there is nothing wrong with that at all. After all, whisky is meant for the masses. In the case of Double Single, I’m not too sure of the premise that the use of just two high quality components has resulted in more complexity. I found Enlightenment to have an edge over it which has four malts in the mix. And its hardly surprising given their pedigree. But it’s not four vs two or two hundred. I just don’t think there is a formula for complexity, yet.

Compass Box has come under criticism here on Malt and in the whiskyverse. Overpriced-bling-style-over-substance. Some of it is not entirely unwarranted especially on the pricing, over reliance on storytelling etc. Having said that I still find their core range a very solid offering at an accessible price point. If that makes me sound like a fan boy then so be it. But then I’m as much of a fan boy of Chorlton Whisky and North Star Spirits and on the transparency ranking (if there was one) both would score much lower (not faulting them for that) than Compass Box. But do they consistently release stellar whiskies even though we will not know anything more about the juice beyond what is printed on the label? Ok don’t get me wrong. I’m not pro-ambiguity. Far from it! But for me transparency is good to have rather than a must have. And I cannot see myself overreaching in that sense. Case in point – The Spaniard. I know the recipe but it didn’t float my boat. I found it rather dull and I think it is the weakest expression in the core range. And I will extend this to the recent madness around Terroir as well. Underlying intent (good or bad) around all these buzz words is also to extract more from your wallet. But finally the juice has to do the talking.

Now my final two bits. In my formative audio engineering days I voraciously read technical papers and every high end equipment review I could lay my hands on. So, consumed I was with audio geekery that went into audio and music production that I could discuss topics like acoustics, frequencies, phase, imaging, timbre, crossovers, harmonic distortion, solid state vs tubes, class A vs class D and all the rest of it till the cows came home. Until one day it dawned up on me that I had stopped listening to the music! Passion at times overrides objectivity and robs us of the simple pleasures of life. Sometimes we need to put aside our critical listening syndrome and start enjoying the music. After all, there is music in whisky as well.

Compass Box The Story of the Spaniard