Aberfeldy resides in an often-overlooked area of Scotland. There’s too much haste from travellers to sprint north, which often means the NC500, Pitlochry, or the west coast of Scotland, as quickly as possible i.e. foot down average speed cameras permitting. Such destinations have their own charisma and the islands further afield such as Harris, Lewis, Orkney and Skye await those with an aspiration of adventure.

As whisky tourism booms, so do the bright lights of Campbeltown, Islay and Speyside, radiate across the globe. A sense of awe and bewilderment that a wee country such as Scotland can pack so much into a mere few hundred miles: from the civilised central belt into ancient glens and ruins of a former clan stronghold.

Whenever I’m asked about visiting Scotland and giving advice to those seeking to craft an itinerary, I always suggest doing less than anticipated. Once Scotland is experienced, then you’ll want to come back and discover more: plenty awaits. Take the time out to stand in awe of Tormore, suck in the smells of Lagavulin and cry at the modern monstrosity that is Macallan. Scotland is whisky and whisky is Scotland. You won’t struggle to things to do, adventures to pursue and experiences to treasure. Just make sure you’re not swamped with too much and in doing so, cannot truly appreciate anything. Like a fine dram, sit back and soak in the experience.

In saying all of the above, it strikes me that Aberfeldy as a destination deserves more of the spotlight. There are plenty of rentals and convenient holiday parks that offer a solid mix of comfort, pursuits and food options. This is an area for families as well as whisky enthusiasts and couples. The fact that my own family was encamped in our cottage with a godawful gastro bug (thanks to a parent who shouldn’t have let their kid go to the nursery) isn’t the point. We could still appreciate the scenery, tranquillity and a visit to Aberfeldy distillery towards the end of our residency.

For whatever reason, Aberfeldy is a distillery that I hadn’t visited until 2019. The detour off the A9 when heading north to Sutherland, never seemed attractive. This is partially due to the distillery itself being a middle ground occupier and a steady-Eddie, rather than a whisky that people become passionate about. Aberfeldy and its whisky had an ok reputation thanks to the work of those canny independents. Then in 2014, the whole range was revamped and brought into the modern era.

Aberfeldy’s raison d’être has always been blends, hence the Dewar’s association. It still is to a certain extent, but now it has been liberated and given an equal footing in the single malt arena. There is still major work to be done as the job is by no means finished. I’ve always found its whiskies to be solid, if unexceptional. The promise that is shown in flashes of honey and fruits is never fully captured in the new official range.

Presentation remains the issue. The bulbous shaped bottle design does have an air of authority and class, but this never permeates into the liquid itself. Bottled at 40% in this day and age does not show off the qualities of the distillery. It might spread the liquid more and boost the profitability slideshow presentation, but the actual whisky suffers. It’s not as if there is a shortage of Aberfeldy to go around either. Yes, the distillery is a small player compared to the Death Star’s of Glenlivet and Glenfiddich, or Macallan. But there seems plenty to go around and this includes a variety of age statements.

The 12-year-old could be deemed entry-level yet it should have enough to take lead you into other expressions. The range is characterised by the overuse of artificial colouring and chill-filtered, thereby removing much of the texture, oils and character that we know it can harbour. These are business decisions of the modern age and replicated across many brands. Such foundations don’t showcase a whisky in the best possible light and ultimately as a consumer, you only return and explore a distillery, if you are intrigued and satisfied.

Where Aberfeldy regains some respect is via its widespread distribution and pricing. We haven’t reviewed any releases from this distillery since 2016, which underlines the points above. Mark enjoyed the 16-year-old and I found the 18-year-old engaging enough: despite our collective comments around the presentation.

And if you’re in the neck of woods of the distillery, you are guaranteed a warm welcome, which was opened in 2000 and features a wide selection of whiskies from across the parent group. The whole range of Aberfeldy is on show, including additional merchandise and exclusive editions. When we visited, the staff were very kind, friendly, helpful and the distillery canteen is one of the best we’ve visited (and we’ve been around) with facilities for all.

It was during this visit that we purchased an exclusive hand fill release. There were a handful of options, ranging from several bottle-your-owns, including a heavily sherried expression and an expensive 40-year-old. A readily available distillery exclusive was also on sale in the corner of the bar, where you could enjoy a whisky flight, a solitary drink, or even try before you buy.

We went for the 2002 bourbon cask matured option from cask #20022 and bottled at 53.8% strength. This will be around 16-17 years in age and should give us a stark contrast to the aforementioned core 16 and 18 expressions. The price was a little excessive at £110, underlying the premium at which such visitor experiences are priced nowadays. Especially, when you consider the official 16-year-old costs £54.90 from Master of Malt or the same price from Amazon, whereas it’ll cost £58.75 from the Whisky Exchange. In fact this is verging on 21-year-old territory which costs £124.99 from Amazon, or just £124.95 from Master of Malt with the added bonus of a fancy special edition box! So, not a cheap option and from memory, it was the cheapest cask at the distillery to hand fill.

On the nose: caramel, vanilla nougat and musty wood. Honeycomb, bubblegum and ripe apples with a subtle orange. A harsh citrus edge but it also remains malty and a touch of smoke. Fresh varnish, almonds, hazelnuts and buttery oily quality. Adding water showcases more vanilla and a lighter presentation.

In the mouth: oily and punchy, green apples, grapefruit and a touch of smoke. Kiwi Fruit, lemon zest, pencil shavings and astringent in parts. White chocolate and creamy towards the finish with added cereals. It has body and an oily residue. Adding water reveals more fruits, red berries, cranberries, tannins and hemp.

This is a pretty good Aberfeldy single cask that showcases the benefits of avoiding a master blender and a more natural presentation. This whisky feels more alive and as it should be.

While I can accept that some of the core range should be as it is for an accessibility basis, for those new to whisky or shopping on a budget, we need to see more cask strength Aberfeldy. Then it’ll be appreciated on a wider scale for the qualities that we’re seeing here.

There are commission links within this article, but as you can see, they don’t affect our judgement. 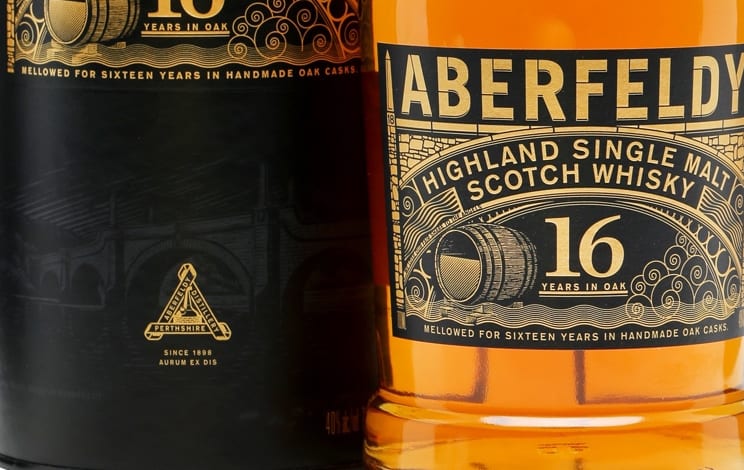