I used to get very cross, as a nipper, at being marked down for not showing working. It felt to me like nothing but belligerent jobsworthiness on the part of a maths teacher for whom I had very little time in any case. “I know the answer,” I would think, “and you know the answer, and you know that I know the answer. The entire, tedious matter has been resolved to the satisfaction of all concerned. Why on earth do you care how I arrived at my conclusion? Oh – and whilst we’re at it, that comment you made about not carrying a calculator in my pocket when I’m older is about to age appallingly.”

So I dare say it would give the odious number-walloper no small satisfaction to see me, eighteen years later, grousing and grumbling and railing against those companies who don’t want to show their working either.

At face value, whiskymakers are under no obligation to show us their hands. For one, it’s entirely their business what goes on the label and into the website copy. It’s their whisky, after all. And for two, as I’ve heard our detractors digitally sigh more than once, if a whisky tastes decent, does it really matter that we don’t have an up-to-the-minute fermentation time, cask-by-cask breakdown of the wood policy and the mobile number of the barley farmer’s husband? I can cite any number of whiskies that have given me immense pleasure without offering more than the scantest of production detail. I can just as quickly rustle up whiskies on which I have been given chapter and verse but which have limped from their tasting glass with mewls and whimpers.

I suppose it comes down to engagement. I am more likely to give a damn about a producer who wants to talk about what he or she has made. I can’t throw my money at every last bottle that catches my eye, though self-isolation has found me giving it my best shot. So I want to make the odds as good as possible that my hard-earned shekels will yield a whisky that I’ll enjoy from the first sip to last. More than that, I want to ponder – not always, but occasionally – on the ingredients, the production, the casks and the care that have, through their individual parts, added up to the sum total of the aroma and flavour clutched in my hot little hand. I want, from time to time, to learn a little something as I drink.

Transparency throws off the invisibility cloak wrapped around so many of the shoddy, contemptible practices that fester like cankers on the industry. The artificial colouring, the switches to efficient yeast strains, the over-used barrels, the shortened fermentations. What it comes down to, in my head at least, is the notion that if someone is prepared to take the time to talk me through the minutiae of every step of their process, they’ve likely given those steps their fullest care and attention. Whereas if I’m being fobbed off with stories, irrelevances and wink-wink insinuations about trade secrets, what am I to think but that they have something to hide?

One of the joys of digging deeper into cider in the last few years has been that there’s very little PR to wade through. Cideries almost never have brand ambassadors – when you reach out to one, nine times out of ten it’s the maker who responds. And generally, if they do respond, they’re happy to talk you through their product. To share what they’ve done and how. After all, if you’ve made something you’re genuinely proud of, why wouldn’t you?

That’s why I’ve banged on about Bimber so much in the last year, and it’s why some of my favourite pieces on Malt have been the long-form distiller interviews that Taylor has made his speciality. In particular the two with Caleb Kilburn of Peerless and Shane Baker of Wilderness Trail. There is absolutely nothing I could add to either – read them both, now, then come back. And whilst you’re at it, take a look at the other massive chat Shane had with Alexandra.

Having read those two interviews you’ll now be furnished with as much information about Peerless and Wilderness Trail as any sane person would want to shove into their brain. From where I’m sitting, these are comfortably two of the most exciting young distilleries in the USA at the moment. That doesn’t make them infallible – Peerless raised eyebrows in their early days as much for their pricing as their methodology, and I’ve not loved every expression that’s crossed my path. But both are, I think, distilleries you can enthuse about, making whiskey of which you may have justifiably high expectations.

I certainly had high expectations of the pair I’m reviewing today. Both are single barrel picks from the British Bourbon Society; a rye from Peerless and a bourbon from Wilderness Trail. Continuing the theme of transparency, once upon a time I was involved in the Society’s picks, but that was a couple of years ago now, and wisely they didn’t let me near either of these. The Peerless rye is three years old, bottled at a cask strength of 53.6% and set me back £75, whilst the Wilderness Trail is a fraction older, at four years young, has been bottled at 56.5% abv and cost £65.

On the nose: That is a lovely nose. Crisp, clear and with an excellent weighting of deep notes and high. It’s rather sweet – brown sugar and maple syrup – but they’re balanced by branflake and charred, barbecued meat. Almost ribs. Woody spices buzz around the edges. This is very, very noseable.

In the mouth: Tremendous, oily texture and the flavours continue nicely where the nose left off. Caramel and vanilla first, then cereals, char and wood (not too much – oak and distillate are walking the tightrope nicely). The alcohol is surprisingly aggressive for the proof, but that’s my only complaint. Fruitier in the mid-palate – dark plum and blackcurrant – then back comes that brown sugar and branflake. For a young wheat-recipe bourbon this is epic. A really good, considerately-made whiskey that should appeal to the purest of bourbon purists.

On the nose: Another cracker. Fainter than the Wilderness Trail; less cask, more distillate, but fruitier and (dare I say it?) more complex. Raisins and cherry jam. Apricot and orange peel. Then something slightly medicinal. Not quite germoline. Sawn pine and rye grass seem to nudge back towards the youth.

In the mouth: Even better texture than the Wilderness Trail, which means it also holds its fire better. Full of black fruits – plums, raisins, black cherry – alongside ginger oil, marzipan and sponge cake. The rye presents, but it’s not too overtly spicy; it certainly doesn’t have the lean tautness of a high-rye; the corn is making its weight felt. Just a little black pepper on the finish alongside that herbal, medicinal twist. Perhaps just a touch too light and youthful to hit the epic scores, but delicious nonetheless.

To make an outrageous generalisation, these are exactly what I want my American whiskeys to be. Boldly flavoured, forthright and supremely approachable … yet with those little flourishes and definitions and extra nuances of flavour and texture that point towards the extra working. The extra effort. The extra care. Both, it need not be said, are ridiculously good for the age. But that’s increasingly the hallmark of the craft distillery (as opposed to the simply small-and-new distillery).

I had the last dregs of my Nicholls & Perks Peerless sample left, which I’d hung on to specifically to compare to the BBS bottling, confused at the difference between my score and the unanimous sevens dished out by Mark, Jason and Phil. Re-tasting it, I stand by my mark – I could perhaps have gone a point higher on a more generous day. This BBS bottling trounces it. (And is my slight favourite against the Wilderness Trail – it’s scratching at the door of an eight). I do hope that my Malt colleagues won’t be too disheartened though; all three are marvellous chaps of whom I don’t think the slightest bit less for their scores on this occasion – a 99% strike rate is, after all, nothing to be ashamed of.

But returning to point: buy both of these whiskies if you can. How there are any left, I’ve no idea*.

*Postscript. Since writing this article the Wilderness Trail has sold out. Them’s the breaks. 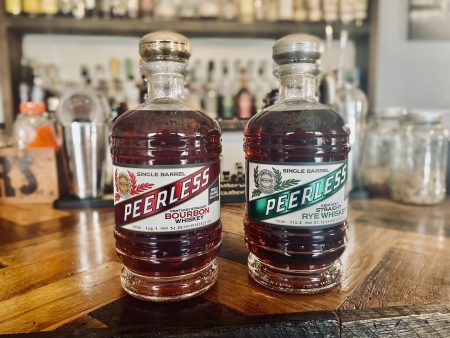