We all love origin stories. So, why don’t we get acquainted with Japan’s original sakamai, or sake rice?

The sakamai I am referring to is called Omachi. This rice was first discovered in a village of the same name, back in 1859, although I’ve read other sources citing it’s 1866, but either way whoever you believe, it is a few years ago. The village is from the western part of Okayama prefecture. Until today, almost all of Omachi rice is still grown in Okayama.

There are pretty much two types of rice used to make Japanese sake. The cheaper type is merely table rice. As the name suggests, this is what often ends up on our tables and bellies. The other is called sakamai (sake rice). Sakamai is larger than table rice (typically 30% larger). The starchy heart (shinpaku), which is what brewers want in sakamai, are also separated better from the proteins and fat compared to table rice. This makes it easier for them to polish the rice to make Ginjos and Daiginjos. Think of sakamai as pork, where the meat is better separated from the fat. Think of table rice as beef where there are pockets of fat in the meat.

Omachi is Japan’s oldest pure rice strain. It was once one of the three most widely grown varieties during the Meiji era (1862 to 1912). But times have changed. It has lost its crown nowadays, becoming only the fourth most used sakamai. Yamada Nishiki, Gyohakumangoku, Miyama Nishiki are currently ahead of it in a polite and respective order.

Why did Omachi become less used over time? Well, the most cited reason is it’s harder to work with. Yamada Nishiki rice, which was bred in 1936, has become the most widely used. This is pretty much considered the ultimate brewer’s rice. I’ve often heard that this is the sake world’s equivalent of Cabernet Sauvignon. The stalks of table rice are normally around 70 to 90cm. The stalks of Yamada Nishiki are normally over 100cm tall. This is not so tall compared to Omachi rice stalks, which can grow as tall as 150cm. Aside from this, the softness and roundness of the Omachi grain makes them more prone to breaking. This, in turn, makes it harder for the brewers to polish the grain down to ratios fit for Ginjo and Daiginjo sake.

That’s enough talking about rice. Let’s give some spotlight to the brewery.

This sake is from Heiwa Shuzo. The brewery was founded in 1928 and is located in the city of Kainan, which is situated just outside the city of Wakayama… in the Wakayama prefecture. The brewery underwent a couple of “rebirths”. One of which was its renaming to “Heiwa” in 1952 as a nod to the end of World War 2. Heiwa means peace in Japanese.

Kishu no Fudo, or better known as “KID”, is the creation of fourth-generation owner Norimasa Yamamoto. He stopped the low-grade bulk production of sake in the brewery. As a result, “KID” was made to signify the new generation of sake producers who are focusing more on quality than quantity.

In the mouth: Much more noticeable tastes of strawberry and cherry mochi. Followed by hints of mango on shaved ice with cream, something mildly sweet and sakura flavored, Hi-Chew strawberry candy. Rice husks at the end.

This is a really great summer sake. Light in flavor, but loaded with flavors that resemble tropical fruits and refreshing floral desserts. My mind sort of briefly warped into memories of my most recent trip to Japan. Being able to think of eating fruits and sweets found in Japan, just helps sustain me mentally, as we’re still not allowed to travel due to COVID-19 lockdown measures. 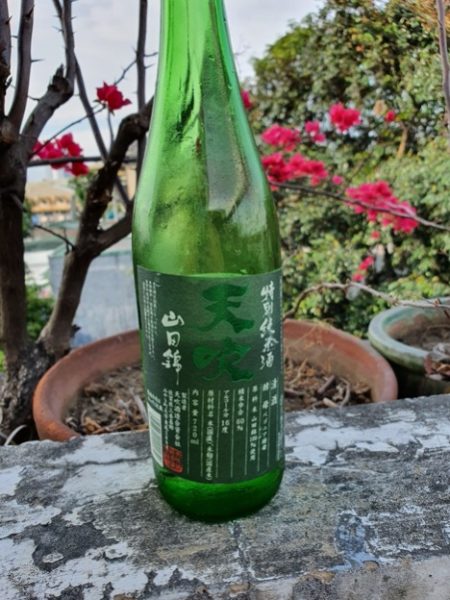