Cornwall – Cornish – was a strong brand long before Aiden Turner began standing on assorted cliffs looking anguished and windswept. Pasties, cream teas, tin mines and smuggler’s coves. Potted folklore and potted mackerel. King Arthur pops up here and there, as do absentee homeowners from London and Cornish-speaking secessionists. So far as the virus-grounded staycationer is concerned, Cornwall, by dint of its significant percentage of coast and significant distance from virtually everywhere else, sits very much at the most exotic end of England’s ledger.

I’ve not visited nearly as often as I’d like, but I adore the place. A happy memory from an otherwise miserable time is of hiding away with a few good friends in a rented cabin near the south coast. Of reckless gasping in the iron-cold Marchtime sea and long evenings in the flickering shadows of tucked away pubs. Just up the road from where we were staying was a medium-sized cidery. We didn’t visit – I wasn’t much interested in such things back then – but we bought a few bottles from a campsite reception; one-litre glass jugs with the little round thumb-handles. We chilled them as hard as we could, glugged them down without ceremony or thought beyond “this seems nicer than Strongbow”, and a few years later the cidery was bought by Fuller’s and now you can’t move in London for Cornish Orchards.

Perhaps because of the strength of Cornwall’s brand I always assumed that the Cornish made more cider than they actually do. “Cornish Cider”, in my uneducated head, held greater resonance than anywhere besides Somerset. At that time I doubt I could have told you where Herefordshire even was. Beer-drinking friends would visit Cornwall and abandon their usual poison for fermented apple juice. It felt like a thing – like something established; something that ought to be done.

But in fact there are comparatively few cideries in Cornwall, and even fewer making cider with proper Cornish apples. There are two largeish cideries; the aforementioned Cornish Orchards and Healey’s, in the north, where they make the ubiquitous Rattler of idiosyncratic pump-handle fame. (The geophysicist rather likes it.) Neither, I suspect, uses wholly Cornish apples, and if I was a cynical man I’d ponder how much Cornish cider these days begins life as shipped-in concentrate. But if it’s made in Cornwall then Cornwall goes on the label and into the mind and glass of the consumer.

So few Cornish ciders are made in Cornwall from wholly-Cornish apples that when I visited Haywood Farm last September, Tom Bray speculated that he might be the only one. Haye Farm, whose tenants Raynor and Tim pressed their first vintage last autumn, would now count as another, though I don’t believe they’ve bottled it yet, and I believe (hopefully not naively) that I have now encountered a third.

Trevibban Mill is a winery and cidery just down the road from Padstow. They’ve made cider since 2014 using the 1,700 apple trees they planted in 2010. Cornish cider was traditionally a blend of culinary and cider apples, though traditions don’t tend to hold much bearing on modern ciders and are often dangerous things where they do. My suspicion is that Trevibban follows the old template, though my enquiries regarding varieties were met with “green and red”. It’s increasingly common for English wineries to experiment with cider, but where usually the offering is just one, generally champagne-method, bottle (generally marketed as “not like other ciders”) Trevibban Mill have created an impressively diverse range.

My slight gripe is that it’s rather hard to spot on their website. The sub-header mentions orchards, but beneath that are listings for only Wine Tours and Tastings, and you have to scroll a fair way down under ‘Shop’ until the ciders become apparent. The first thing I noticed was that they are predominantly bottled in 500ml stubbies; something of a shame, I felt, given the beautiful packaging of their wines. To this query, cidermaker Engin replied that if the market took to cider by the 750ml he would prefer to bottle in that format on environmental and cost grounds as much as for aesthetics. So go on market, do your bit.

Wineries making cider ought to be seen as a great positive. As Andrew Lea mentioned in our conversation, there’s a great deal of crossover in Australia, where makers see it as just another fruit; one they can turn into a drink using broadly similar if not identical processes. The additional benefit comes in the form of technical knowledge; I would be very surprised to discover a fault in a cider made by a winery given the vastly advanced technical knowledge in the wine industry regarding hygiene and storage. A slight downside is that many winemakers have a very set style in their heads when they come to make cider; it’s a rare winemaker who seems prepared to consider cider as existing on a wholly separate plane of flavour; bold, rich, tannin-driven creations seldom spring from any English winery’s besides Simon Day’s at Once Upon a Tree. Perhaps, as the audience for aspirational, fault-free ciders grows this will gradually correct itself. Just an aside.

I’ve two Trevibban Mills lined up today for which I have to thank my intrepid friend Esther who happened upon the winery whilst out on a bike ride (and insisted I give her a name check). First up is their flagship Cornish Cider, followed by Tiger Milk, which has been made by macerating and fermenting the cider on its pulp. Where the name comes from I couldn’t begin to guess, but I’m expecting a distinctive taste. Both are still, have been fermented in stainless steel using selected yeasts, are made from ‘real organic apples’ grown in Trevibban Mill’s orchards and were sterile-filtered before bottling. The Cornish Cider is available from their website for £3.50 a bottle, or £6 for a 750ml. The Tiger Milk doesn’t seem to be listed but my spies discovered it here for £3.55 per 330ml. Thanks spies.

On the nose: Very delicate. Soft green apples, more rounded notes of pear and a lick of lemon. Straying in a peach blossom direction, but it’s not particularly floral, this one. Very clean.

In the mouth: There’s a nice tang of green malic acidity skewering through the softer fruits and lending them crispness and freshness and structure. Works perfectly still. As with the nose, flavours aren’t enormously complex, but they’re direct and very pleasant. Lemons and limes, fleshier pear, a touch of oyster shell minerality. It’s clean, it’s balanced, it’s nice and dry and it’s very refreshing.

On the nose: Bigger than the Cornish Cider and very enticingly aromatic. Baked apple, pomegranate, red grape and red cherry. All the red fruits! Scored through by a green streak of cellulose and a little rose petal. Lovely.

In the mouth: Again there’s a wonderful energy of acidity, but the body is bigger and the lightest dusting of tannin adds to that. There’s more intensity of flavour too – everything’s big but thus balanced. Bright orange citrus, sharp red apple, cranberry and rhubarb. Touches of vanilla and caramel. Faultlessly clean, dry and delicious.

Fully fermented, undiluted dry cider is, when fault-free as these are, the pinnacle of the art form to my mind. There’s a wonderful balance to both of these ciders; at 7.5% each they’ve the body to go with their flavours and precision, and there’s no film of sugar clinging to your teeth once finished.

The Cornish Cider is fairly simple fare, but attractively so; it’s not flimsy or insipid. Enjoy it as you might an Italian white; well-chilled, outside and perhaps with a plate of seafood and you’ll do very well. It’s certainly perfect for the heatwave which, at the time of writing, I am now heartily sick of.

The Tiger Milk is a cut above. Fermenting on-pulp is a delicate business, as we learned from Ryan at Caledonian Cider, but they’ve judged it tremendously. The blend of apples is complex, aromatic, packed with flavour and marries depth and freshness fantastically. I wouldn’t hesitate to recommend it to anyone, whether casual cider sipper or long-standing enthusiast. My only gripe is the size of the bottle; 330 ml is simply not enough when I’ve to share it with a thirsty geophysicist. I’ve already stocked up on a few replacement bottles, but if I could buy half a case of 750 ml bottles I would have no hesitation in doing so, and they would set the crown on any sunny afternoon deliciously. I can’t think of a better Cornish Cider I’ve had.

I’m very glad that my friend unexpectedly stumbled upon Trevibban Mill, and next time I’m in Cornwall I shall certainly pay them a visit myself. In the meantime, I hope to enjoy a few more of their ciders, and I’d recommend that you make the most of what’s left of the summer and do the same.

Many thanks to Esther for smuggling the bottles back and to Engin at Trevibban Mill who answered my queries about them. 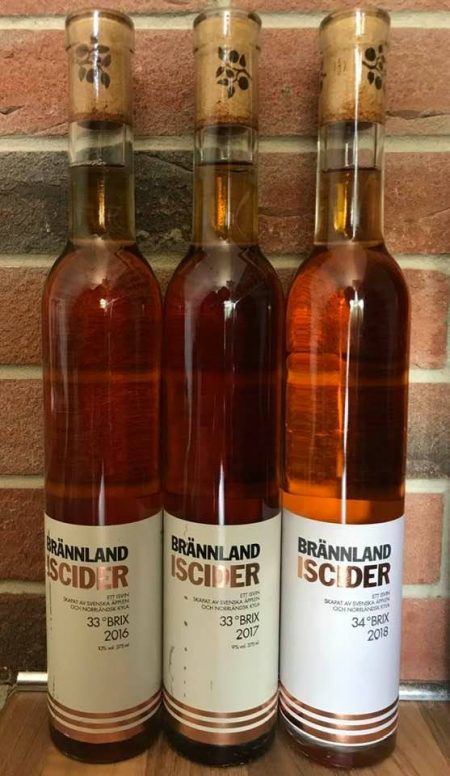