Consider your inspirational quote for today, delivered. I’m sure when Ernest Hemmingway penned such a sentiment in 1932 for Death in the Afternoon, he wasn’t thinking about whisk(e)y, although he was well versed in the art of alcohol consumption. The reality was an admiration of bullfighting and in turn, the title of the book became his own cocktail, with a heady mix of Champagne and Absinthe.

By chance, I’ve drunk at some of his haunts and visited his home over the years. In doing so, you get a feel for the man and his legacy beyond the imposing literal works. And he was capable of brilliance but also truly flawed, like so many of us. And we all have weaknesses, flaws, areas of improvement… call it what you will.

Our actions define us. Cause and effect. Statement and feedback. And as you can tell we’re not going to specifically talk about Wild Turkey or the spin-off Russell’s Reserve, that’s on the Malt review slab today. Wary that we’ve talked a lot of Turkey recently. I’m also midway through the informative American Spirit book from David Jennings. So, tapping into the theme of the quotation, I wanted to talk about the ongoing forces of greed and kindness within the whisky(e)y realm.

Acts of kindness are needed now more than ever, in my opinion, with 2020 unfolding as it has done so far. Whisk(e)y has become a breeding ground, or cesspool, for the more negative side of the human condition. As enthusiasts we’re all too aware of new releases appearing in greater quantities online via the secondary market. As I write this, Nc’nean distillery has set a world record for their first release (£41,004) at a charity auction via Whisky Auctioneer, who also donated their fees – a good PR gesture and repairing some of the damage they’ve endured this year in the eyes of some onlookers.

While I welcome the goodwill and proceeds going to deserving causes, the first 10 bottles sum up the madness we’re currently living in. The remainder of the inaugural 1,320 outturn sold out promptly, and many of these will be appearing at an auctioneer near you, soon enough. The only thing that distinguishes the first 10 bottles, other than the number, is a special silver detail.

We’ve all seen club bottles, exclusives, charity releases and such like appear at auction. Heck, Whisky Auctioneer has also sold open bottles, which strikes me as pure madness, a leap of faith and a huge amount of trust from any bidder. The downside to all of this is that people are tapping into whisk(e)y as a commodity and a means to profit. Rather than an actual drink to be experienced. We’re all to blame somewhat for this situation; distilleries have released limited this and that, advertised the exclusivity of their products. On social media we’ve elevated, stroked and frankly masturbated over some unopened bottles. The word unicorn seemingly no longer applies to Scotland’s national animal, but that of its drink, after Irn Bru.

The human condition it seems is to seize upon the opportunity. Even if it means trampling over your fellow brother or sister to have that bottle. It wasn’t always like this and it doesn’t need to continue at the extent it is right now. More and more, I’m stepping away from new releases. Sadly, that does impact what we do here. But we all have our journey and morals to follow.

For several years now, I’ve passed on bottles to those desperately seeking at cost price. It’s not an exclusive club, but it is one that comes with a single rule; open and explore. I cannot guarantee enjoyment, but if I see the bottle or hear that it has been dispatched to the secondary market, then don’t come back to me looking for something else. And I do this because others do it for me. Poignant reminders that many do want to open, explore and share and even during these difficult times; people do the most unselfish things.

What of Russell’s Reserve? While I cannot point you towards this single barrel pick for K&L Wine Merchants in California, as it has unsurprisingly sold out, for those in the UK, The Whisky Exchange will offer a Reserve Single Barrel for £79.95, which might echo what we’re about to discover.

Feeling good as Hemmingway suggests, is something to enjoy and appreciate. In 2020, such moments are harder to come by I expect for many of us. The ability to sit across from a friend or stranger, enjoy their company over a dram. To reach out, show some compassion and support in a difficult moment. This release was a bottle swap from last year, which feels like a lifetime ago. A moment to meet in person, beyond the limitations of the online medium and chat about whisk(e)y, life and much more besides. The bottle was kindly brought over from the States by Beks, from the Los Angeles Whisky Club and swapped for a whisky that they’ll hopefully use in a future tasting. We only had an hour or so in Edinburgh and if flew by over some drinks, with Beks and Stephen, clearly enjoying their Scottish holiday – remember those? How does that song go again? We’ll meet again, don’t know where, don’t know when, but I know we’ll meet again some sunny day…

Referring to David’s book, Russell’s Reserve was released in 2013 to widespread joy. Not only because it was something new, but ticked many boxes for a growing bourbon audience, who were becoming increasingly knowledgeable and passionate about their drink. Non-chill-filtered, bottled at 55% strength (110 proof) and no artificial colouring as standard – I wish the Scotch Whisky Association would ban E150 from malts – along with the prospect of being picked by Jimmy and Eddie Russell. The range has proved popular ever since, as it is near as straight from the barrel as we’ll get and it puts other bourbons to shame at its price point. The bottle specifics are that this heralds from barrel 17-400, Rickhouse D, floor 4 30 1 and is bottled at 110 proof, or 55% strength.

And we’ll throw in a bonus review, as we’re all about feeling today. So, what better than a Wild Turkey? I’ve plucked (sorry) a Tradition, bottled on 2nd August 1994 (or 08/02/94) and at 50.5% or 101 proof. Now, I wasn’t hugely familiar with this No Age Statement release and it’s not to be confused with the 14 year old, oddly released under the same name in 2009. Maybe we’ll get around to that bottle one day, but a little contrast and compare is always worthwhile…

In the mouth: more soft and gentle than anticipated. Caramel, chocolate, oats and fennel. More of that fudge aspect with brown sugar. A pleasing texture without being boastful. On the finish, we have chocolate and nuts with a flush of cherry

On the nose: cinnamon buns, toffee and musk. Some wood spice sits nicely alongside rhubarb, pencil shavings and toasted vanilla marshmallows. Good integration on display overall with some hints of tobacco. Adding water brings a lighter emphasis with more fruits and oils stepping forward and a zesty character.

In the mouth: a gentle orange, chocolate, basil leaf and cinnamon. There’s caramel, Red Velvet cake, dill and almonds. There’s also closed cup white mushrooms, raspberry and on the finish a nuttiness with more chocolate. The addition of water brings about a more pleasant, streamlined feel with more chocolate flavours.

I’m glad I threw these 2 together as it underlines the similarities of both. You can pick up on the family linkage between them on the nose and it’s only on the palate when slightly different paths are taken. Upon reflection, this shows the consistency and core strengths of what’s being produced at Wild Turkey and has been, literally for decades.

The Russell wins out overall, with its single barrel format and higher strength – just offering that extra dimension. But let me say, the Tradition is a really good everyday dram. Plenty of character and that dangerous quality of being very drinkable. You could fly through a bottle quite easily. I’ll probably look to acquire some different batches and compare again. A good time whiskey, with a strong feeling of approachability and enjoyment; isn’t that what whisk(e)y should be all about at the end of the day?

There are commission links above and these are just for your convenience and have no influence on the article. My thanks to Just Whisky Auctions for the Tradition sample. 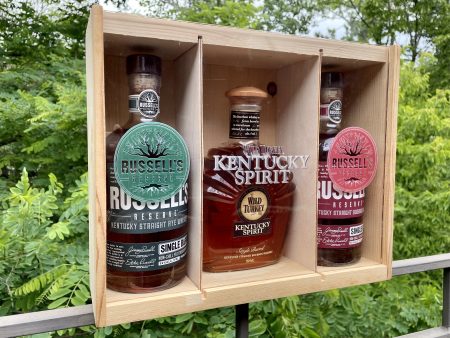