Today I am a hypocrite.

This is a charge occasionally levelled at Malt by those corners of the whiskynet which hold us to be scurrilous, unscrupulous rogues. I’ve not seen it entirely substantiated, mind, but opinions are jolly important things, as we’d be the first to submit. Today, however, I admit it openly and unreservedly.

Because the two glasses I have in front of me are guilty of much at which we – I – have grumbled in past articles. I couldn’t tell you the first thing about their ingredients, for instance. Much of their production process is a mystery to me too and I am not even explicitly told their distilleries of origin (although I can guess at one of them with 99.9% confidence.) They are also undeniably on the expensive side.

And I am very, very excited to try them. Far more so, in fact, than I am about many if not most of the process-wonkish, detail-obsessed, ingredient-trumpeting glassfuls that cross my path.

All of us, even those of us who share a hobbyist’s obsessive devotion to whisky, get excited by different things and with different motives. I’m not entirely sure when I became particularly curious about English whisky – much of it is samey, some of it is fairly bland, most of it will be far better in future years than it is now – but curious is what I remain nonetheless. Jason’s gears are revved by Tormore for reasons that have nothing to do with the spirit, Phil’s any Redbreast’s fool unless he feels he is especially expected to be, and Mark has several times and soberly expressed a fondness for Dalmore. There’s nothing Taylor likes better than reviewing Wild Turkey, despite his scores suggesting that he generally finds it middling at best, and our new correspondent Whisky Sleuth (who I have learned is actually a Chipping Sodbury-based Basset Hound by the name of Colonel Snuffles – prove me wrong) lets out barks of joy at any whisky that is served beside four-or-so others in tiny bottles.

But these little satellite idiosyncrasies of interest orbit around a nucleus of general nerdish consensus. Kilkerran, for example, is all-but-unknown outside of enthusiast circles, yet anything besides the twelve-year-old becomes virtually unfindable within hours of launch. More controversially perhaps, given how much we talk about distillate character, heavily sherried or cartoonishly peated expressions will always be amongst the most sought-after bottlings. Age may not be a determinant of quality, but a big number will always have a special allure. And, perhaps most particularly, something which comes with the recommendation of an especially trusted palate.

This is the third time that WhiskySponge bottlings have cropped up on Malt, so I need not introduce satirist, writer and liquid archaeologist Angus MacRaild too effusively, except to make the pertinent point that, as trusted palates go, in the circles where the most irretrievable of whisky nerds cluster, his ranks pretty highly. (As evidenced by the pace at which his bottlings sell out – in one sense I feel very relaxed when Angus sends samples, as there’s absolutely no chance that an article could be published whilst the whisky remains on the primary market, though his recent Jura and Dalmore editions may be specifically designed to test that theory.)

The pair that I have in front of me today certainly didn’t last long. A 35-year-old secret single malt from the Highlands (except it’s not secret – it’s Glenmorangie) and Sponge’s first foray out of whisky, a 75-year-old Fins Bois Cognac.

Since neither are now displaying on the Copper Monument site I can’t remember what either cost. Both sat in the “special occasions and deep pockets” bracket, but echoing Mark’s thoughts regarding the Kingsman Edition Glendronach, both seemed competitive for what they were. Independently bottled Glenmorangie of any age is thin on the ground indeed, and as for 75-year-old Cognac – 75 year old anything – bottled at a significant strength (50.5% in this case), good luck finding a better price than the £500 or so asked here.

On the subject of the Cognac, since the totality of my experience with the spirit encompasses a maximum of perhaps 150-200 bottlings, none of which were close to the age of this one, I am in near-entirely alien territory when it comes to tasting notes. The only thing I’ve tasted that’s spent that long in wood was the 75-year-old Mortlach Gordon & MacPhail produced a few years ago. (At a Whisky Show tasting, in case you thought I had a spare twenty grand knocking about or a bottle worth burgling my flat for.) So without any significant frame of reference I just have to beg your indulgence on the writeup front. 75 years though. Ooft.

On the nose: Mr Sponge openly likes a waxy malt, and this fits that brief nicely. Candles and beeswax. Hessian, leather, the inside of old wardrobes but offset by honey and mint and deep, juicy citrus – old orange marmalade – which gives life and lift. Assured of aroma – neither too delicate nor a bruising beast.

In the mouth: Big honeys on arrival alongside more wax, stone fruit and milk chocolate. Chewily textured with a little black tea tannin and metallic tang towards the finish. The malt has survived its years very well; there’s a good bit of branflake and husk beside polished oak and old orange rind. Venerable and visceral without being overbearing. It’s complex and engaging and a compelling showcase of cask and distillate.

On the nose: Good Lord, where to start? Huge, billowing aromas – deep molasses, old wood, earthy forest floor and postmix cola, scored through by a freshness remarkable for its age. Ginseng, polish, aftershave, orange pith. Deeper and juicier grilled pineapple. There’s certainly a real aged rancio here – game jus, portobello mushroom. But the brightness after 75 years is remarkable. Dried oregano, Szechuan pepper. To be honest you could nose this forever and keep being nipped at by different, shifting notes of oak and fruit and spice. The booze fumes have quite some poke, mind. “Deep but bright” was the geophysicist’s much more usefully concise assessment.

In the mouth: Silky-textured – not quite as full-bodied as the whisky. Again the tones sit at both ends of the register: caramel, molasses, brown sugar, dark chocolate mingling with big menthol, clove, polish, smoky herbaceousness and white pepper. A good bit of dried orange. Big, drying oak on the finish. It isn’t quite as complex as the nose, to my mind, and there’s a good bit of spiky heat from the alcohol, but this is nonetheless a fascinating privilege to try.

Angus doesn’t do boring. Both of the above are as compelling in practice as they are intriguing in theory. Glasses to spend a long time in contemplation with. The oak on the Cognac, perhaps not surprisingly, did start creaking a little on the palate, but the nose in particular belied its age and was an endlessly complex and beautiful thing. The Glenmorangie was simply another excellent marriage of cask and spirit and time and a wonderful advert for “old style” whisky. Not quite in the same angels-singing league as the Glen Moray we reviewed in January, but wonderful nonetheless. The geophysicist, a much sterner critic, was at a 7. Perhaps I’m just a softy.

No profound conclusions. Sponge remains as sharp with a cask as he is with a quill. Best advice is to save your pennies and keep a weather eye on the Copper Monument site and a weather finger on the refresh button.

Many thanks to Angus for the samples, and many apologies for the tardiness. Prompt reviews are reserved for drinks aged 80+. 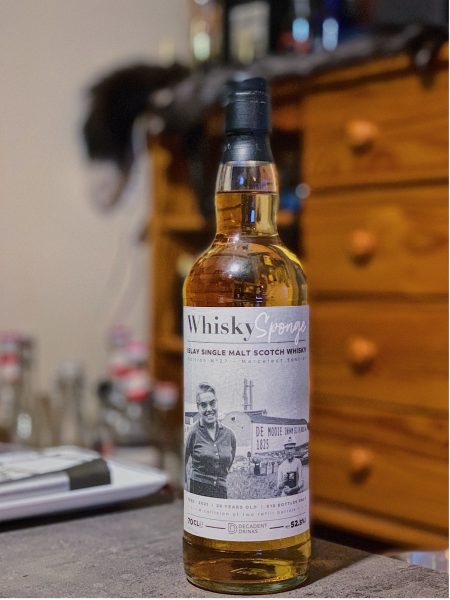