The new release from Neachneohain, or Nc’nean between friends. Welcome ladies and gentlemen to the madness of Scotch whisky.

This is Batch 1 of their single malt and while there was an inaugural bottling, I tend to think of such things as showpieces and trophy bottles with the whisky actually being a side topic. Having tasted the Waterford Pilgrimage, I can only feel sympathy for anyone that opens it and is looking for a special whisky. Inaugural releases are very hit and miss. It’s a moment in a bottle that rarely matches secondary market prices. So, for me, things get interesting when we see the beginnings of a core range. This is what a new distillery will be built and judged upon. Hence our interest in Batch 1 of the Nc’nean organic single malt. And as expected this has been selling out everywhere, because it is limited and whisky isn’t about the whisky anymore unfortunately.

So much so, like Waterford, they’ve had to bring forward plans for Batch 2, which will now be bottled sometime in October (now slipped to November). The problem being, most of the inital demand is inflated and false. Driven by those eager for that first release as an investment, before looking elsewhere to other new arrivals such as Ardnamurchan. Resulting in a proportion of the second wave remaining with retailers for sale. That’s beneficial to enthusiasts and somewhat disruptive and unpredictable to distilleries and shops.

From a personal perspective, I’ve been keenly following Nc’nean’s journey with interest. A fascinating backstory, a beautiful location and focus on being as green as possible and providing opportunities locally. The team consists of a variety of backgrounds and genders, as it should be.

This batch features organic barley and 2 types of yeast (Fermentis, Anchor) with a decent period of fermentation coming in at 114 hours. Nae bad, but Glenallachie and Dornoch are taking things to another level. Such lengths will encourage those fruits, but old-skool fruits? That remains to be seen. And then we have the casks, which is Dr Swann’s legacy, the STR, short for Shaved, Toasted and Re-charred Red Wine Casks. Originally, quite a novelty, but now the taste of almost every new distillery it seems. The final cask recipe is 65% STR (made up of red wine casks) and 35% bourbon. But that’s not all, as Nc’nean also have more details about their batches.

We need differentiation and the distillery DNA to come through. Not just the bottle is recycled glass and the use of renewables. I don’t want my youthful whisky wrapped him and hidden by an assortment of casks including French wood. If the spirit is good, then let it sing front and centre, Karen Carpenter style. So, ladies and gentlemen, its showtime.

On the nose: odd, not what I was expecting at all. A light floral nature, dried cranberries, frozen raspberries and bruised mint leaf. There’s a mix of grapefruit and putty with fennel as well. Some almost gin-like aspects to the character. Almost suggestive of a foreign whisky. A touch of rubber, orange rind, cold porridge, old paint peeling and liquorice. Adding water brings out more of the porridge oats.

In the mouth: a lick of red wine influence and drying in parts. More of those dried cranberries, sage, marzipan and melon. Red liquorice, black peppercorns, woody in parts and a handful of oats. Adding water reveals some apples and boiled sweets.

I’m somewhat disappointed. The issue here is the influence of the STR, and in particular, the R-factor has given this whisky more of a Portuguese wine taint, which does step back the longer you leave it in the glass. The final blend is off the mark. I’m left questioning what is the character of Nc’nean? Where is the Highland character and essence of the landscape? You expect cask deployment when bottling whiskies at this youthful end of the spectrum, however, I just feel it has overstepped the mark and somewhat devalued the experience.

We do know the STR ratio, but I’d suggest the team changes things with Batch 2. Give us less of the R-factor, or even, flip the ratio meaning 65% bourbon and 35% STR. What’s there to hide? Then, as repeat customers, we can truly compare and contrast in the hope of identifying the character of Nc’nean beyond the externals.

Sadly, the team have confirmed that Batch 2 will be more of the same. That doesn’t prompt me to rush out for a new experience. I may just have to wait until something different comes along and that’s disappointing.

This is a score that does offers merits on our scoring guide. To give you further context, I reached out to members of our own Bimber Fan Club, who have experience of youthful whiskies and strong cask influences, to provide additional perspective…

On the nose: Light, fruity, estery. Orange zest, peach skin, apple sweets, maybe lime chewits. Totally in the high tones, no depth here. Maybe a bit of gristiness and a smatter of pine. I must admit I’m straining to find anything particularly idiosyncratic – singular – but it’s ok.

In the mouth: Plump and light. Nice texture actually. Good balance. Again the flavours are pretty straightforward – more pine, light malt, vanilla, candied lemon. It’s soft, has definite charm, is certainly balanced, and feels like a nice clean cut, but this is very, very simple fare. As regards actual liquid character or quality, there’s nothing to set it apart from the crowd.

There’s nothing wrong with this, per se, it just feels a bit demure. A bit muted maybe; a little shy and quiet. There’s nothing that demands you pour another glass of Nc’Nean; there’s nothing here that gives you a real handle on what the character of the distillery will ultimately be. But then it’s the earliest of early days. This is clearly a whisky you’d buy for the “inaugural” hook, rather than in expectation of sparks and fairy dust. And it’s by no means a bad start.

On the nose: curious, at first. Aniseed, fennel notes are very huge at the start and then that fades to leave some boiled ham and some pretty unusual distillate character. A few tropical notes with lychees, pineapple, grapefruit and yet it’s a bit balanced. Pine needles. Red fruits. Blackcurrant. Needs a long time in the glass to lose some of the rogue astringency.

In the mouth: much better to taste than on the nose. But if anything this has the same “closed’ feel I get with certain pot still whiskies that use unmalted barley in the mash. The spirit underneath it all feels quite oatmeal-y, porridge-like with honey; unbalanced against the cask influence. Spicy notes with tart cranberries and a bit too much woodiness. Cloves, pepper, drying. It reminds me more of a rye whisky than anything else. Peppermint on the spicy finish. A promising texture that said, but the casks are overpowering – or rather, I am not entirely convinced the spirit can sufficiently cope with whatever it is the cask playbook has dealt out here. Or do I mean, in my opinion, the cask selection doesn’t match the distillate?

There are some excellent new distilleries today. Personally – I am but one voice muttering into the pointless online ocean – I can’t help but feel this is just falling a little short of the brilliant standards we’ve seen out of the blocks elsewhere. Is it the STR formula? I don’t think so, though I don’t think it’s done many favours here. STR is common fastrack for smaller distilleries, but sometimes work (Cotswolds, a good example), which means primarily I am left with questions about the distillery’s spirit character, notably its individuality. And it’s a shame we can’t taste more of the organic barley; there’s a lack of maltiness, a lack of that barley having come through in the distillate; fine if it’s not their thing. I suspect a little mean of me; these are first distillations, there’s much to fine tune at the start of proceedings. 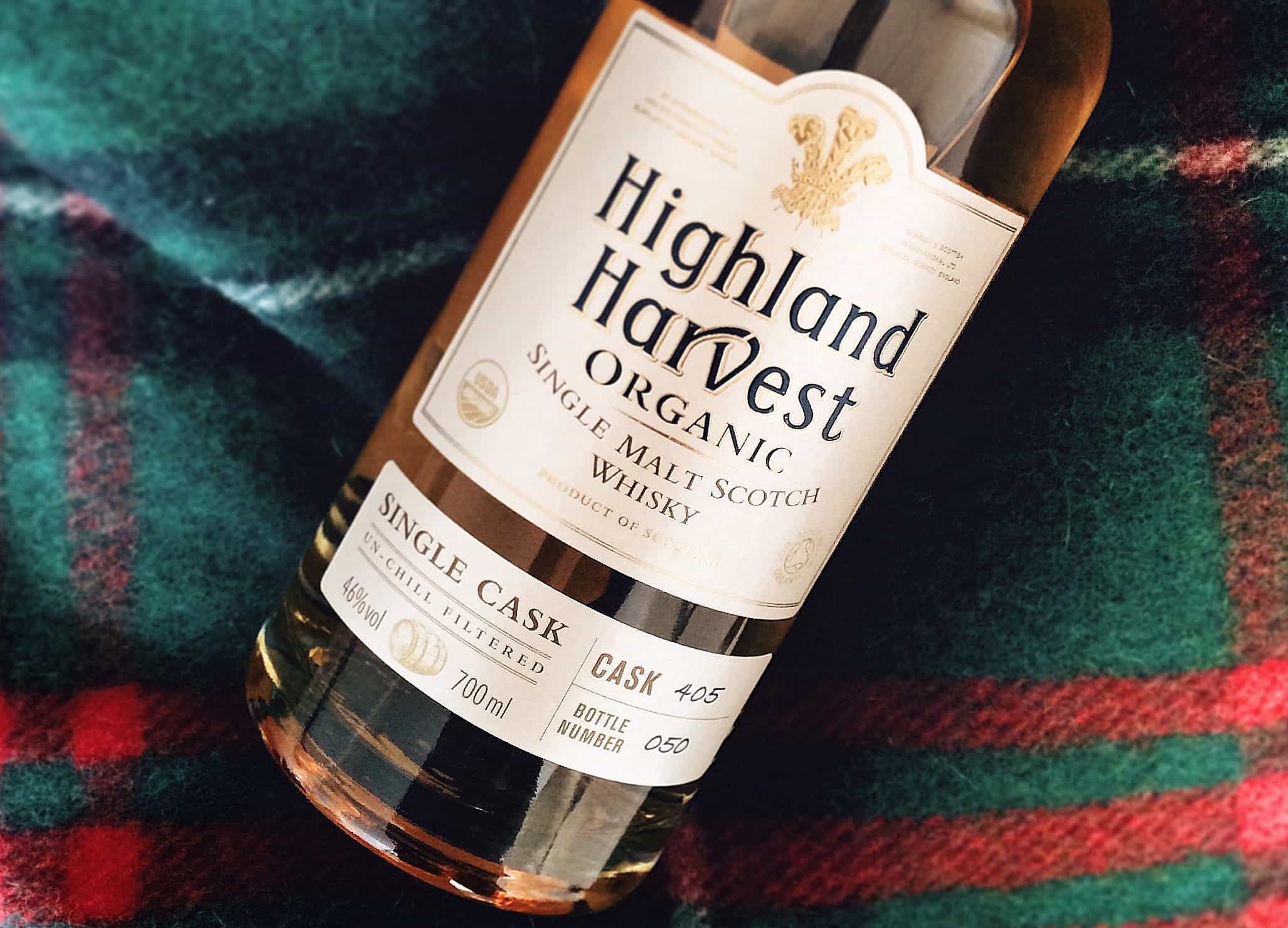