What did you think of the new Glenturret range?

I have to say I was slightly stunned. Even though the Lalique Group acquired Scotland’s oldest (up for debate with Bowmore) distillery in 2019 for a modest fee with a Swiss entrepreneur. Many of us had forgotten about the deal and what it might represent. I guess, all things COVID-19 have caught our imagination and focus recently.

Well, now we know, don’t we? And what a sight it is to behold ladies and gentlemen. Stunned was my initial reaction to say the least. A viable representation of what might be if Louie Spence moved into whisky branding. But this is Lalique, so we should expect a statement and something that captures your attention. Good or bad, and it certainly focuses the mind even with an assortment of distractions.

The whisky itself has the hallmark of Bob Dalgarno, formerly of the big M, who has sculpted the existing stocks into something more palatable. This might explain the awards that have also been quoted. Given that Glenturret has been underperforming for the last couple of decades, Bob has played a blinder. Although regular readers will know that such awards are somewhat flawed given the fees and desire to retain repeat submissions. However, we won’t let the real world dim the spotlight of a lovely medal.

In the end, Edrington didn’t really know what it wanted to do with Glenturret. The mammoth company has a history of ditching illegitimate distilleries which have been on the receiving end of questionable treatment for several years. Many of us know that Glenturret did once, and should be, producing good whisky. The fact that it really hasn’t done too much in recent times is more of a result of mismanagement and a lack of direction.

This fact is remarkable given how quaint and beautiful the distillery actually is. It has a character of its own but instead was forced to ride piggyback with the Famous Grouse as the spiritual home of the blended scotch. The fact that Edrington retains the Grouse and has ditched the spiritual destination underlines just what a flawed concept it truly was.

So, hopefully, you can expect our verdict on some of these whiskies in due course. In the meantime, we have this recent bottling from the Scotch Malt Whisky Society to explore. Now, I know, regulars will be wondering where our coverage of Scotland’s most variable bottler has been? Truth being, I didn’t renew immediately, as facing more mediocrity was a hard sell. Instead, there are plenty of other independents that warrant more coverage and we’ll come back to the SMWS in 2021. Still, we do have the odd opportunity such as this, to keep tabs on the current state of play.

I’m not missing the experience of average bottles and overpriced releases. The final straw was the tone of renewal reminder and tugging at the heartstrings that membership is needed for them to survive. What about the rest of us? Whisky memberships aren’t an essential purchase and your focus on the corporate sector is looking shakier with each COVID-19 update.

This Glenturret was distilled on 10th July 2013 and bottled at 6 years of age. The re-charred hogshead gave birth to 187 bottles at an eyewatering 63.9% strength. It has since sold out, which goes for anything peated nowadays, but would have set you back a reasonable £48.

On the nose: all peat initially, a shallow but forceful variant. Bacon crisps, kindling and that chemical calamine lotion note I tend to pick up with peated Glenturret. Bashed mint leaf, Kiwi fruit, a little lime and toffee. Adding water is an option at this strength. The whisky can take it although there isn’t a metamorphosis: chocolate, salt, apples, white wine vinegar and some caramel.

In the mouth: peat obviously, but what else? Embers, smoke, coffee beans and ashy on the finish. Certainly not lamb, there’s more lamb in a vegan restaurant. Beef jerky and some sea salt. Let’s try with water again and time. Something that’s always beneficial when you can. This brings out more smoke and cocoa, but little else.

This ticks the box for peat if that’s what you’re looking for. Beyond this, the whisky is hard work given the youthful nature of the dram at hand. There isn’t much else to uncover or appreciate. And it’s merely a box tick for Glenturret in their distillate variety. The distillery is capable of much more and 6 years isn’t really giving this a chance to showcase much other than the ppm and giving enthusiasts to try a peated Glenturret. However, we’re seeing more and more of these casks called Ruadh Maor, reaching independents to a mixed response. Clearly, the novelty factor is wearing thin and if you want affordable peat, then you’ll do better with Ardmore or the fertile ground that is Caol Ila.

Sample kindly provided by the neighbour. 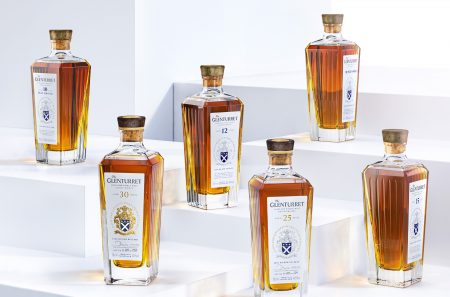