It’s hardly revolutionary to point out that the flavours of a full juice cider or perry are dictated, first and foremost, by the varieties of apple or pear in their makeup. I’d go so far as to say it was entirely common sense. So why are they so painfully underdiscussed?

Read a Pomona – any Pomona – and you will arm yourself with in-depth knowledge on varieties by the hundred. Size, shape, growing tendencies, disease resistance, rarity, history – everything conceivable besides the only salient point as regards the drinker: what they taste like when manifesting themselves as a cider or perry.

The Long Ashton Research Centre enshrined in the ciderista’s consciousness the impulse to categorise apples and pears solely by the metrics of tannin, acidity or lack thereof. With the upshot that these are often the only shorthands reached for when varietal discussion is raised. “What do you like about Dabinett?” “Um …. It has tannins”. “What can you tell me about Foxwhelp?” “yes, lots! – it has acidity” “that doesn’t feel like lots” “ah, well, it has lots of acidity”. “Kingston Black?” “Tremendous! It has tannins and acidity. What more could you want?” “Ok, Egremont Russet?” “Er … er … er … Well it doesn’t really have tannins or acidity, but … but … look, you’ve tricked me somehow. It’s great, ok, it’s just somehow great. No further questions will be answered. We’ve done apples now.”

This sort of thing simply doesn’t happen in wine any more. Look at Nebbiolo, for instance. It’s certainly characterised by pronounced acidity and tannin, but imagine how much would be left unsaid of its inimitable briar fruit, rose petal and tar notes, its headiness of aroma, if we left it at that. And what about Pinot Noir? A red grape with low tannin and mid-acidity. Really? That’s Pinot Noir summed up? Imagine talking about Riesling without bringing up limes and kerosene and honey and the astonishing unfurling and evolving notes that can coaxed through long ageing. Imagine talking Coonawarra Cabernet without blackcurrant, menthol and eucalyptus. Imagine Syrah without pepper or Merlot without plums or Sangiovese without cherries or botrytised Sauternes without marmalade or Manzanilla without saltiness.

It is in the comparing of these notes that much of the culture of appreciation blossoms. If you and I sat in a room together (post-COVID, obviously) with the same liquid in different glasses, we might find a swathe of different and personal aromas, but just as fascinating would be those we found in common – the clear touchpoints which spoke of something typical to the cider apple, perry pear, wine grape. The teasing out of character; the “ah, yes” moments when a Pinot Noir speaks to you in its most classical tones; the “goodness, what’s going on here then?” experience when a variety throws a curveball.

I recently opened a bottle of Little Pomona’s Hazy Ways 1 2017. Don’t go looking for it – it’s long sold out I’m afraid. It ballooned from the glass with the juiciest, most sun-bright and opulent orange notes, abetted and buttressed by endlessly moreish vanilla. Although there were 9% of other varieties in its makeup it was one of the purest and most gorgeous expressions of the Dabinett apple at full tilt that I’ve tasted this year. Yes, it had mid tannins, yes it had relatively low acidity. But were either of these points anywhere near the forefront of my mind as I nosed and tasted? Were they what I would regale friends with if they asked me about the bottle? Of course not.

I accept that many – most – ciders are a blend of dozens of varieties based on whatever trees were planted in a given orchard. But I think, if we are to aspire to terms such as “fine cider”, then the phrase “a blend of bittersweets and bittersharps” on a bottle no longer cuts the mustard. You could apply that epithet to anything from Smith Hayne Methode Traditionelle to Oliver’s Bottle Conditioned to Wilding’s Yarlington Mill, Porter’s Perfection and Sweet Coppin. Cider and perry deserve to be taken seriously and with curiosity. But that only starts when we learn to speak more eloquently and interestedly about the fruit.

In the spirit of which, I am taking a metaphorical trip across the channel to drink Vinot Poiré from Jérôme Forget of Ferme de l’Yonnière. Jérôme was a former president of AOP Poiré Domfront and was instrumental in Normandy’s Domfront gaining its appellation status. Whilst perries that bear the Domfront AOP on their labels must, by law, contain at least 40% Plant de Blanc in their varietal makeup, Jérôme doesn’t feel excessively constrained by the appellation’s rules and is perfectly happy to build a range that reaches outside of them. Today’s bottle, based around the Vinot variety, is one example.

I’ve reached out to Jérôme a couple of times now for articles I’ve previously written on French poiré, and he has always been astonishing generous in his time and prompt in his reply. Quizzed about the Vinot variety he described it in brief as “tangy, sharp, with citrus flavour. The first fruit is green and then it turns yellow”, which has me in mind of such English varieties as Yellow Huffcap and Thorn. It is joined in this bottling by Pomera “fresh and lively. The trees are magnificent” and Plant de Blanc, which I have discussed on Malt in more detail here.

It’s described as still and dry – another departure from the Domfront norm, and I bought my bottle at CidrExpo for perhaps around €10. The exact price escapes me. As with so many of France’s treasures, there’s no distribution in the UK, something I continually find bizarre. Given our current political situation, I don’t see that changing any time imminently, but perhaps some intrepid podcaster or hardback author might nip over for a shufti one of these days when the world’s a little more settled. They’d certainly find an enthusiastic customer in A. Wells if they did.

On the nose: Pretty delicate, running along an elderflower, fresh pear and lemon sherbet theme. Honeydew melon and chamomile. Wet slate. If I’m comparing to English varieties I’m in sort of a blend of Butt and Yellow Huffcap territory. If that helps.

In the mouth: I think I’d definitely peg this as French, blind, though it’s obviously not as sweet as most. There must be a fair bit of sorbitol in the varieties though, as a certain sweetness does poke through. Flavours-wise it’s more intense than the nose, with lemon’n’lime, satsuma, a flutter of pineapple and a slatey core of minerality. Medium acidity and just a tiny bit of tannin.

Very drinkable indeed, and certainly speaks of its place. Without other Vinots to compare it to I can’t state definitively one way or another whether this is a classic example, but the flavours I experienced certainly tallied with Jérôme’s descriptions. I’d certainly look for Vinot again, and hope other producers follow Jérôme in listing and detailing their fruit. It has certainly worked for wine.

Such is the quality in Jérôme’s stable that I wouldn’t say this was my favourite of his cuvées, though I like it a great deal and would happily buy another bottle. If only I could. 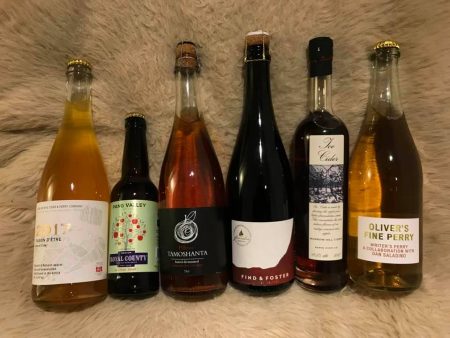