How about a kick in the butt?

We could all use one from time to time. Listeners to Malt’s Patreon podcasts will be aware how many drafts Jason has languishing in his folder. Likewise, I’ve got a docket of distilleries in my iPhone’s Notes app that expands more frequently than it contracts. For each one that I can scratch off the list, it seems like at least two more come to my attention.

Top of this list for a while has been Laws Whiskey House of Colorado. Why? They have beautiful bottles. I walk by them on the shelf at my local whiskey superstore and think, “Damn, that’s a fine-looking bottle.” Does this matter? Yes and no. There are a few truly hideous whiskey bottles out there, while the vast majority fall well short of any design that could be called inspired.

Craft distilling has, of late, become a bastion of fanciful packaging. Perhaps foremost is the flanged cylinder from Kentucky Peerless, with its old-style gold-foil-accented label. Laws is nipping at Peerless’ heels with its Arts and Crafts movement-inspired aesthetic. I should note that I am especially predisposed toward this style, having been introduced to Charles Rennie Mackintosh’s sublime interiors while living in Scotland and subsequently getting married in a house of worship designed by Frank Lloyd Wright.

It’s not just consciousness of this personal bias, though, that puts me on edge when I see these types of bottles. I’m also pricked by the lurking suspicion that anyone taking so much care with the exterior must be trying to hide something about the interior. Like an embellished yarn of an origin story, an exuberant bottle or label is nowadays shorthand for “sourced whiskey.” After all, not having to personally make the stuff leaves idle hands free for the devil’s work of concocting novel conceits for moving what is effectively a commodity.

Call me a cynic if you like, but the preponderance of evidence would seem to support my misgivings. Take another Arts and Crafts inspired package: the mellifluously shaped bottle and elaborate box of Angel’s Envy, which must come as a small visual comfort to those who have overpaid so unconscionably for its contents. Fortunately, a bit of research quickly assuaged these concerns with regards to Laws, and I’m happy to share with you my findings:

Located in Denver, Colorado, Laws Whiskey House does not source whiskey, nor has it ever done so. Founded by Alan Laws (the eponymous “A.D.”) the distillery relies on two family-owned farms (the Cody farm in Colorado’s south-central San Luis Valley for the small grains and the Ohnmacht farm on the eastern plains of Colorado for the corn) for the raw materials.

Laws credits the Colorado climate with bringing out flavorful characteristics of its raw materials. Verbatim: “the rarified thin air, the hot days and cool nights of the Rocky Mountain region, and the rugged growing conditions of the San Luis Valley and eastern plains that stress our grains just enough to deepen their flavor.”

A three-to-four-day open-air sour mash fermentation is followed by distillation in a four-plate pot still. Barrel entry proof has been between 105-120; the company has leaned toward the lower end in recent years. Photos on Laws’ website attest to maturation in full-sized 53-gallon barrels, which has been the exclusive barrel size since the beginning. Batches of around 40 barrels are married in a modified solera process after having been proofed down to bottling strength.

Laws filled its first barrel in July of 2011; the company is currently on its 21st batch of its Four Grain Straight Bourbon. The distillery is in the midst of a two-phase expansion project, which will see the installation of additional grain bins, four 1,000-gallon fermenters, a 1,000-gallon cooker, and a 2,000-gallon pot column hybrid still from Vendome. Expected completion is in early 2021.

Returning to the initial blow to my backside: this review finally got underway because I found a tasting pack of two 375 ml bottles, which ran me $50. However, I’ll be scoring these whiskeys with reference to the full bottle retail prices, which I’ll note below. As an aside to all the craft distillers out there: a package of multiple smaller bottles is a nearly irresistible enticement to those of us looking to discover new distilleries, and you’d all do well to embrace this format.

On to the review. I’m starting with the Four Grain Straight Bourbon Whiskey. This is batch #15, bottled at Laws’ standard strength of 47.5% ABV. This whiskey comes to us from a mash bill of 60% corn, 20% heirloom wheat, 10% heirloom rye, and 10% heirloom malted barley, of which all are purchased from Colorado farms, as noted above. A 750 ml bottle of this runs $60 near me.

On the nose: Sweet and plump at first, this smells very corny despite the quantity of other grains in the mash bill. There’s a deep richness of honey to this as well. I get a bit of a juvenile woody note and some earthy aromas that transition gradually to a sweet whiff of hot chocolate. Some appealing points in here but also a bit of awkwardness.

In the mouth: This is nearly flavorless. I am struggling to find descriptors, not for lack of vocabulary but rather because there’s almost nothing here in the way of character. Starts silently, piping up ever so slightly with the most dilute and vague woodiness in the middle of the mouth. As quickly as this evinces even the most understated body, it disappears again. There’s a dilute, weakly lingering woodiness as the sole element of what could be called a finish.

This would be overpriced at half the going rate. It’s got a better nose but less character in the mouth than Jim Beam White Label, itself a real wallflower. At least Beam has the advantage of being inexpensive. I’m not sure how all the care in sourcing grains, fermentation, and distillation resulted in something so bland, but there it is. Our scoring bands use the phrase “astonishingly dull” to describe a 3 on the scale, which fits this whiskey to a T.

Next, I’ll be trying the Secale (suh-KAH-lay) Straight Rye Whiskey. “Secale” refers to the Latin genus of rye grass (Secale cereale). This has subsequently been renamed the “San Luis Valley” rye. This is from a mash bill of 95% rye (of which half is malted) and 5% barley. The bottle I have is from Batch #8, with handwriting on the label indicating this is “aged 2+ years.” It is presented at 50% ABV. A full-sized bottle of this is not available currently, though the (older) bottled-in-bond version goes for $70 in my neck of the woods.

On the nose: Altogether meatier, this has the stalky, green aroma of jungle plants. The malted rye imparts a subtly doughy note to this. Intense sniffing reveals very subtle nuances of cinnamon stick, butterscotch candies, mocha, and wood polish. A more promising start compared with its predecessor.

In the mouth: The flavor dial is cranked up ever so slightly relative to the Four Grain Bourbon, but this is still mostly underwhelming in the mouth. Once again, a silent entrance is followed by an astringent, tannic sensation toward the front of the tongue. A dirty woodiness is the sole discernible flavor as this reaches the top of the tongue. There’s a faintly peppery heat that radiates around the mouth as this finishes, but I am once again struggling to identify any characteristic flavors here.

Somewhat better than the Four Grain Bourbon, this still falls well short of the better examples of craft rye. Again, I am flummoxed by the weakness of the result following such apparent attention to detail in the production processes. About the most positive thing I can say is that this doesn’t have any overt awkwardness or glaring flaws, in the sense of repellent off notes. Still, though, this is pretty disappointing.

I was prepared to leave this review here with a dolorous shake of the head. However, doing the due diligence for this article brought me in contact with Steve Kurowski, Marketing Director for Laws Whiskey House. When I mentioned I would be reviewing two older batches of the bourbon and rye, he suggested that he might send me samples of some newer batches for comparison. I agreed, and he sent two 100 ml bottles free of charge, which of course will not impact the review or the score.

On the nose: Again, creamy and grain-driven, with ample corny notes to start. Some pleasantly meaty aromas emerge, particularly pulled pork. More deep inhalation reveals spicy notes of cumin and anise, but there’s a constant return to the buttery and creamy aspects. Leaving this to sit in the glass for a while, I start to sense a yeasty and woody topnote that is slightly awkward. Yet more aeration reveals a delicious note of graham cracker.

In the mouth: Similar to the prior batch, there’s a progression of textures here without very much accompanying flavor. The taste of egg yolk marks the entrance. There’s a vaguely bready element in the middle of the tongue, similar to roosterkoek. The highlight of this is a woody and honeyed note that blooms at the top of the tongue. This fades into a dilutely woody and somewhat dirtily earthy aftertaste that spreads across the back of the tongue.

More flavorful than the last bourbon, but with the addition of a few awkward notes. If only they’d been able to replicate that delightful graham cracker aroma in the form of some corresponding flavors! Unfortunately, we’re left with a palate that mostly tastes like underbaked bread dough, with some other odd elements thrown in. In total, I can’t really rate this an improvement on net, though it’s certainly no worse.

Once again, we’ll be following this with the rye whiskey, now rechristened “San Luis” (apparently “Secale” was too obscure and hard to pronounce). Steve informs me this is from Batch #13 This is also now bottled at 47.5% to match the bourbon. The standard 750 ml bottling retails for $60.

On the nose: There’s a thick and exotic sweetness here that presents itself monolithically. It’s harder than before to pick out individual notes, so uniform is the nature of the nose. Creamy notes mix with green vegetal aromas which are intertwined with a cleanly spicy scent. There’s a piquantly woody accent that sits at the very top of this.

In the mouth: Starts silently, before gradually revealing some very subtle floral flavors. All of the sudden, this turns completely mute again at the middle of the tongue. This fades into the finish with a slight heat. There’s a lingering rye note in here that isn’t quite right; think of the flavor of stale rye bread creeping around the edges of the tongue.

This has less to say for itself than the prior rye, which was itself a taciturn customer. The few salient notes are either fairly vague or, in the case of the aftertaste, mildly unpleasant. All considered, I’m downgrading this a peg from the last one.

Sorry to say, but the inclusion of these additional examples didn’t really change the verdict for me. It stymies me that anyone could be so attentive to their inputs and yet release whiskey this unremarkable. While bland whiskey may be acceptable in the form of the budget-priced offerings from the major distillers that occupy the bottom shelf, it’s inexcusable in the form of craft whiskey with a premium price tag.

To return to the start: all of us – distilleries included – can use an occasional boot to the rear end. I hope Laws Whiskey House will be able to fulfill the promise of their raw materials by identifying and rectifying whatever errors resulted in such an uninspiring quartet of whiskeys and this subsequent downbeat review. 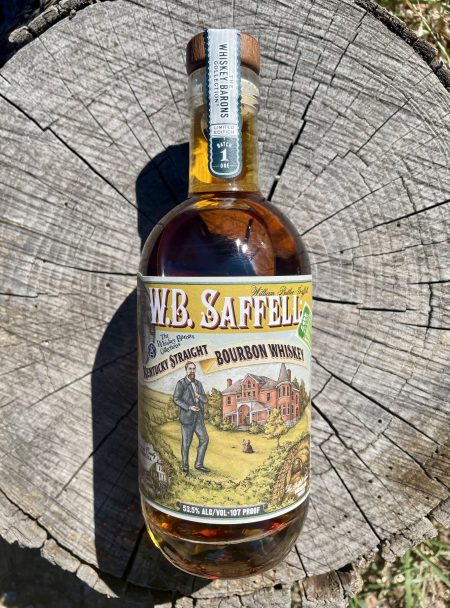