It was yet another miserable day in the Highlands. The sky was slate grey, the mountains were shrouded, and the rain fell steadily. Dad was sulking, as hopes for climbing the local Munros were thwarted once more, whilst Mum was relieved for the same reason. We had arrived at the car park for a walk to The Falls of Shin, and as coats and boots were being donned, I was moaning: ‘Holidays are boring, waterfalls are boring, walks are boring!’ Yes, I was an ungrateful so and so as a child, but I’d rather have been up in the hills with Dad, at the campsite playing cricket with my brother, or even just reading a book.

Yet, on this day the walk wasn’t so boring after all. We reached the viewpoint from where we looked out as the water thundered down the falls, and in amongst all of the spray and churning water, we saw the remarkable sight of fish leaping upwards against the cascading river. The height on the jumps was ridiculous (the sheer scale of it never quite comes across in nature documentaries), and there was a great deal of persistence required, as time and again the salmon fell short and were buffeted all the way back down to the bottom. We celebrated when one made it to the top as if it was our own, and for a short while the weather no longer mattered.

It’s one of those things that have stuck in the memory, so much so, that when I was enjoying an online Tamdhu tasting, Sandy McIntyre (Distillery Manager) got my full attention when he started talking excitedly about salmon heading up the Knockando Burn.

Tamdhu once overlooked within the Edrington portfolio of distilleries (that include Macallan and Highland Park), has moved from strength to strength following its acquisition by Ian MacLeod Distiller’s in 2013 (also owners of Glengoyne). The distillery has shone a light on its history, taking on a stylish Victorian and steam railway inspired rebranding, whilst also sharing the story of the Spanish sherry casks that contribute so strongly in the maturation process. (Tamdhu’s history has been written about well by Mark and Jason previously, so there’s no need to cover this again here.)

There has also been a commitment to addressing a major aspect of the distillery’s environmental impact. Namely its effect on the river, and in particular on the local salmon and trout population. We don’t often stop to think about the impact of distilleries on the rivers that provide the source of their spirit. With so many distilleries on the banks of the River Spey and its tributaries, the cumulative impact upon this life-giving and sustaining river must be considerable.

In recent years salmon stocks in the River Spey have been in decline. There are a number of reasons for this, including pollution, low water levels occurring more frequently due to prolonged dry spells, and a reduction in the number of fish returning from the open sea. There are also factors that prevent the fish from reaching good breeding grounds, human-made barriers such as hydroelectric dams and the impact of deforestation on waterways. The Speyside tourist industry relies heavily on whisky, but it also benefits from visiting anglers keen to catch Scottish salmon for themselves. This industry is worth around £50 million a year, providing jobs in the local community, and of course more visitors for hotels and distillery tours.

Tamdhu, of course, cannot rectify the problem entirely, but they have taken steps to address the issue as best they can in terms of their own ecological footprint. When Tamdhu distillery was built in 1897 alongside the Knockando Burn, not far from the Spey, a dam was constructed to allow easy access to the water required for whisky production. This was a major obstruction that prevented salmon from reaching their spawning grounds further up the burn. That is until the summer of 2018, when the Tamdhu Fish Pass was built to circumvent the dam. In conjunction with the Scottish Environmental Protection Agency and Spey Fishery Board, Tamdhu has made it possible for salmon and sea trout to return to their breeding grounds of old. (You can read about it here).

This is clearly a project that Tamdhu is proud of, and in the afore-mentioned tasting, Sandy was lamenting the fact that tourists and visitors have not been able to see the salmon run in action this year, as many fish have used it to reach the burn beyond. You may at this point be bored with fish, hoping to hear about whisky. That is fair enough, and I’ll come to it in a moment, but I think that care for the local community and ecology is important, and indicates a business ethic that is in it for the long haul, demonstrating that Ian MacLeod Distillers are not the kind of owners who seek to maximise profit at any cost. The salmon run is not a one-off venture. A similar focus on ecological regeneration is evident at Glengoyne too, with their wetlands project and a recent switch to more recyclable packaging as they rebranded (this has not yet happened at Tamdhu). This care for the local environment, for staff, and for staying rooted in the history of its distilleries, gives hope that this caring attitude will be extended to the consumer. Time will tell!

The tasting set I purchased was for Tamdhu’s first attempt at an online tasting. I thought it was a bit too pricey, at £45 for three 5cl drams (12 Year Old, 15 Year Old and Batch Strength 5), and a Victorian-style tasting glass in a fancy presentation box. However, as Tamdhu 10 Year Old was one of my wife’s favourite drams (now changed to the 12 Year Old), and seeing as there would be enough whisky for both of us, it seemed worth a go. It’s important to buy things from time to time that can be enjoyed together!

The tasting was led by Sandy McIntyre and brand ambassadors Gordon Dundas and Gordon Dallas. It was packed full of information, and I quite enjoyed it, although it was a bit dry in style. Whereas I can cope with listening to three late-middle-aged men talk about whisky for an hour, Helen was quite bored, and fell asleep still holding the third dram! The glass provided was great for nosing, possibly the most effective aroma holding glass I’ve come across, yet when it came to drinking it was an awkward vessel, demanding your head be tipped right back when coming towards the end of the dram. It hogs a lot of cupboard space too.

Tamdhu is known for its sherried style and makes a big deal of the casks it has shipped over from Jerez. However, the actual make-up of the casks used in their single malt is not one-dimensional. They use a combination of sherry seasoned American oak casks (that contains more vanillin giving a creamier character), first fill sherry seasoned European Oak, and refill sherry casks. The differences in flavour in each of their releases come as a result of differing proportions of these cask types being used. In addition to this, a substantial amount of Tamdhu spirit is filled into ex-bourbon barrels for blending, and it is often these barrels that are picked up by independent bottlers. These bottlings give a good opportunity to try this fruity and light spirit free of sherry influence.

The newest expression in the tasting set was the 5th iteration of their Batch Strength release. It was fascinating hearing of the process by which this release is constructed, with multiple samples nosed, before a combination of casks are vatted together, and then watered down to a more drinkable ‘batch strength’, in this case, 59.8%. Sandy explained that this should not be taken as an indication that the spirit is very youthful, more that Tamdhu tends to bottle at a higher abv than the commonly used 63%, often filling the cask at 67%, which can lead to cask strength releases being a bit too alcohol forward. Hence the reduction in strength, so it has to be referred to as being a ‘batch strength’ whisky.

All in all, it was a good tasting, featuring delicious whisky, from a likeable distillery that seems to care about producing quality spirit, as well as looking after its local community and environment. What more could you ask for?

On the nose: Raisins, a hint of cocoa, dark caramel, all as you’d expect in a sherry matured whisky, but alongside it there’s a hint of tobacco, and a floral character, reminding me of a summer meadow, some vanilla custard and apples.

In the mouth: Follows on from the nose, layers of sherry and lighter creamy notes. Fruitcake, vanilla icing, and some summer fruits too. Well balanced and smooth, very good for an entry level whisky, and well-priced.

On the nose: Alcohol burn initially, but it calmed down with time, giving butterscotch, cloves, dried fruits, ginger and vanilla.

In the mouth: Gingersnaps, dark chocolate, light brown sugar, raspberry, dates, orange zest, nutmeg and cinnamon. There’s a spiciness coming from both the oak and the alcohol that can be tamed with a few drops of water – but it’s not essential.

Three solid drams, with more complexity than you might expect from standard sherry matured whisky. The use of American oak gives layers that prevent the sherry from being overly dominant. There is a dram for all sherry maturation lovers here. The 12 Year Old is easy drinking, well balanced and not ridiculously sherried. The 15 Year Old is the most sherry heavy of the bunch, with good depth, easily an equal to its equivalents at GlenDronach and the like. However, if you fancy it, then it is not going to be around forever due to stock levels being depleted in the Tamdhu warehouses, so it will likely be replaced by an 18 Year Old in the near future. If you want a punchier sherry led whisky then the Batch Strength is your obvious choice, but again it’s not one-dimensional, as there seems to be a fair amount of American oak in this recipe too. I had tried the Batch 3 previously, and this a marked improvement.

Apart from the 12 Year Old, prices are at the top end of what I would want to pay, particularly for the Batch Strength, but the argument from Tamdhu is that the best casks cost more money, and they’re not going to start cutting corners in any of their processes just to bring the price down. On this showing, I’m not going to argue with them.

Bottle photographs kindly provided by The Whisky Exchange. We also have included some handy bottle buying options which are commission-based. Don’t worry! These don’t influence our opinion and we’d also encourage you to shop around and support local if you can, as Tamdhu is widely stocked. 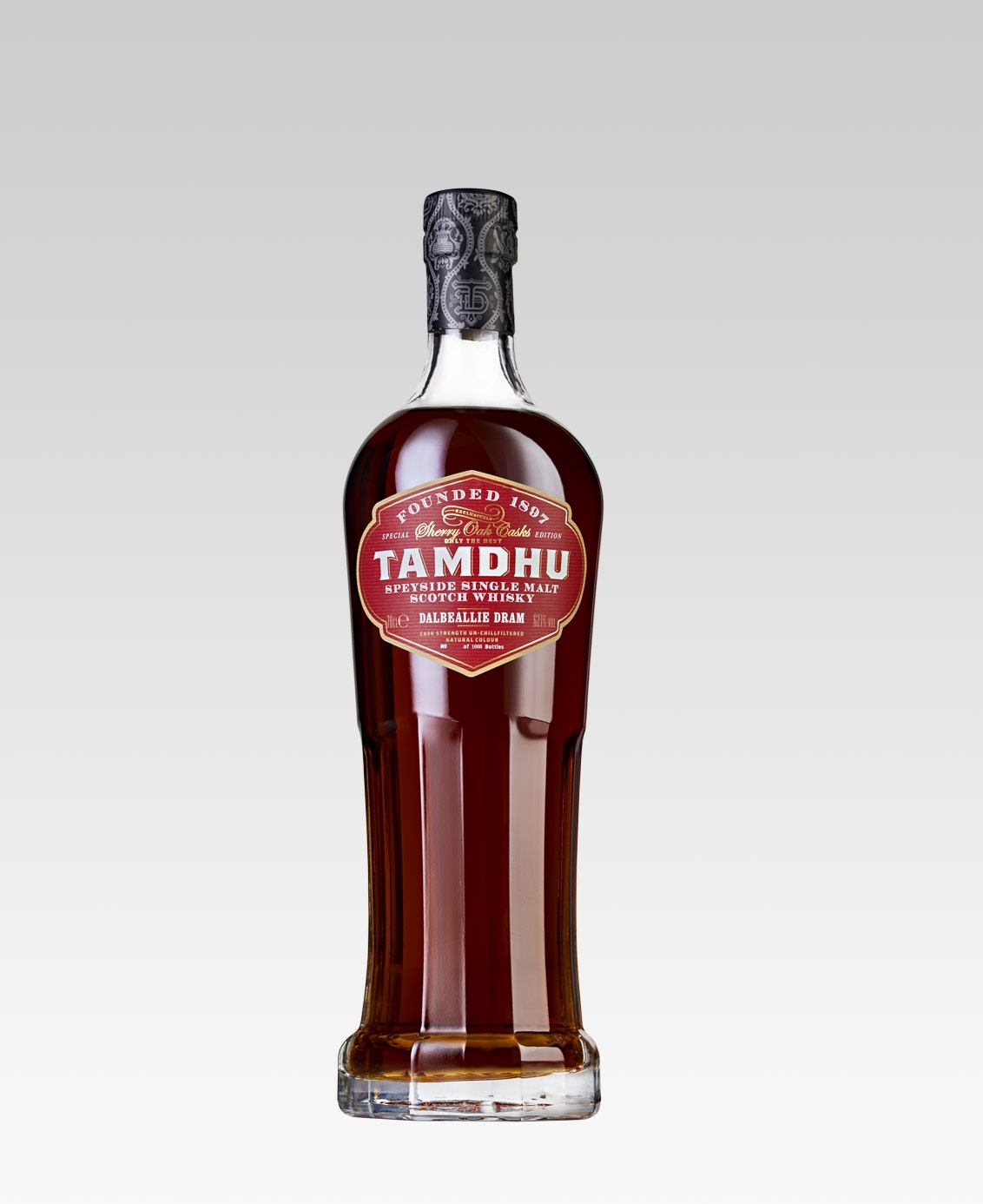