For this year’s seasonal delight, we’re bringing you turkey on the 25th. Nothing new I hear you exclaim, but this is Wild Turkey and extracted from one of those polarising decanters that were filled across the bourbon industry during the 80s in the hope of reviving sales.

I’ve said before, Malt doesn’t stop for Christmas Day or any other day – well over 3 years now with something once, if not twice, per day. Yet for everyone that engages in the festivities, there is another working as normal or not of the Christian faith. So, this post is as much for them as it is for you; having eaten far too much and washed it down with some awful liqueur or the last dram pulled from your advent calendar. This promises to be a Christmas (I’m writing this in November so there might be some optimism) like no other. Personally, I don’t agree with the UK government sanctioning a brief relaxation in COVID-19 rules, to allow families to congregate. It sounds like a future recipe for disaster and doesn’t display the restraint or respect, that followers of other faiths displayed when their own special days were curtailed.

That said, we’re here for the Turkey and we’re going back in time to another era where brown spirits were a very hard sell and you could have your pick. Yes, in a way it sounds like a festive fairytale and pure fantasy, but this was a real scenario. The motivation was to restore sales. We love to collect in general. It’s part of the human condition and why not put some staple late-70s distilled bourbon into a series of ceramics? Collect ’em all if your mantelpiece could take the burden.

This Turkey was one of 3 unsold lots at auction, each being a Wild Turkey decanter. Having approached the auctioneers for a price for a particular lot (not this one funnily enough), I chanced my luck and inquired what the cost would have been. The reply of £90 plus costs, seemed a fair settlement and also freed the auctioneer from having to ship given the size of the ceramic. To my surprise, I was also offered the opportunity to purchase the other 2 unsold decanters. From the same seller, I believe, and it seemed a shame to break up the family, or rafter. The proviso being, that I would drop by and inspect the items before sealing the deal.

The age-old problem with decanters is the seal. Presumably, it was felt most decanters would be opened and enjoyed. Their long term durability wasn’t in question. Generally, these aren’t as longstanding as your traditional screwcap or bottle corked method. The shape and size of these releases meant that some could hold more than a bottle and that extra space is taken up by oxygen. With the potential of a poor seal, it can be recipe for disaster. Particularly those living in warmer climates and who like to display their bourbon wares. Some decanters could have a ceramic seal, or others as we have here a cork. That is a cork guaranteed to dry out over time. An issue I’ve seen more often than not in all my decanters including those Bell’s exponents that are more snugly full of whisky.

The knock-on effect of a compromised seal is evaporation and spoiling of the contents. Having inspected all 3 decanters it was clear they had been kept in good conditions and complete with the original packaging. Another test is to weigh the decanters and compare against other measurements online. Sadly, there doesn’t seem to be a listing of original weights to compare against. But in general, you can get a sense of when something feels too empty, or there’s a leak etc. In the case of all 3 lots, I was satisfied that these showed great promise and sealed the deal.

Taking the flock home, it was on my mind that there had to be sacrificial turkey for this Christmas article. Generally, in terms of wear and tear, there was little to chose between all 3 decanters. So, I went with the ugliest, which also happened to be the most susceptible to a seal issue on paper. In other words, Wild Turkey & Coyote #10, with the rocky outcrop forming the long pourer and the liquid residing in the base.

It’d be interesting to see how much liquid it could take before being totally filled? That’s for another day, instead, tools in hand, I set about unlocking this Wild Turkey from its 34-year slumber. I actually posted the whole opening on my Instagram channel so you can relive the moment, but there’s no surprise in saying the seal had dried out upon opening. Leaving me to break through the cork and filter the liquid into an awaiting empty 70cl UK bottle to see what had survived.

As you can see from the photograph above, the decanter had done its job tremendously well as the protector of the Wild Turkey liquid. It actually filled the 70cl bottle and there was enough left in the decanter for a quick dram. So, I’m thankful for the good result. There’s still the issue of the oxygen that was in the decanter for all that time and its effect on the liquid? With this in mind and acknowledging that Rare Bird 101 aka David Jennings is likely to be reading this, I felt it best to allow the contents to come together and marry in the bottle for 3 months or so. It seemed only fair to take the extra step and then appreciate what we have in front of us.

For the record, this is an 8 year old bourbon and will have been distilled at the Lawrenceburg site, likely in 1977 or 1978, with a reported change in the mash bill to 52% rye, 36% corn, 12% barley as per David’s handy timeline history, although this isn’t bottled as a rye, it shows that this was a period of change. I’m not sure of the secondary value of these decanters. Postage is a concern if shipping back to America and the empty vessels also have a residual value, otherwise, it’s back in the box and into the attic.

On the nose: a pleasing arrival of leathery, orange peel, toffee, vanilla and red liquorice. There’s a leisurely assortment of cherry and raspberry, underpinned by sweet cinnamon and marzipan. Then some all-spice and grated ginger.

In the mouth: nicely balanced with a trio of caramel, orange and vanilla mingling well. Green peppercorns, rhubarb and some bitterness from the wood to catch you off guard. An oily texture persists with toffee and brazil nuts into the finish.

A pleasing and enjoyable Wild Turkey, revived from decades of slumber. I’m happy to have cracked this one open and experienced the benefit of doing so. A whiskey to share with friends and perhaps do a comparison against a more modern expression, at a later time.

Not hugely demanding or taxing to appreciate. I think that’s a core strength of Wild Turkey at times. Reliability, married with just enough character and a level of affordability. A trinity that’s hard to ignore and one that grows stronger, the more you look back. 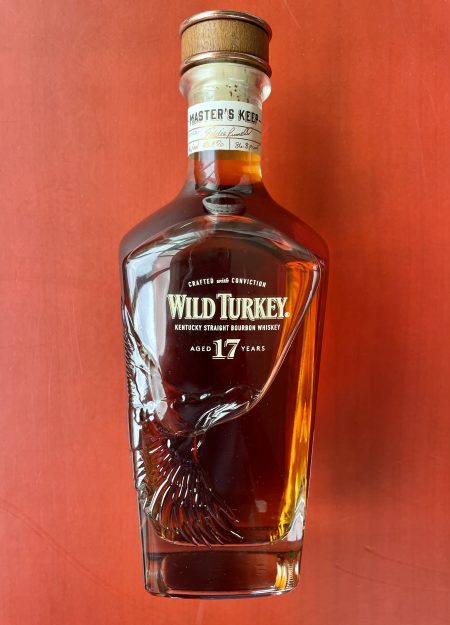