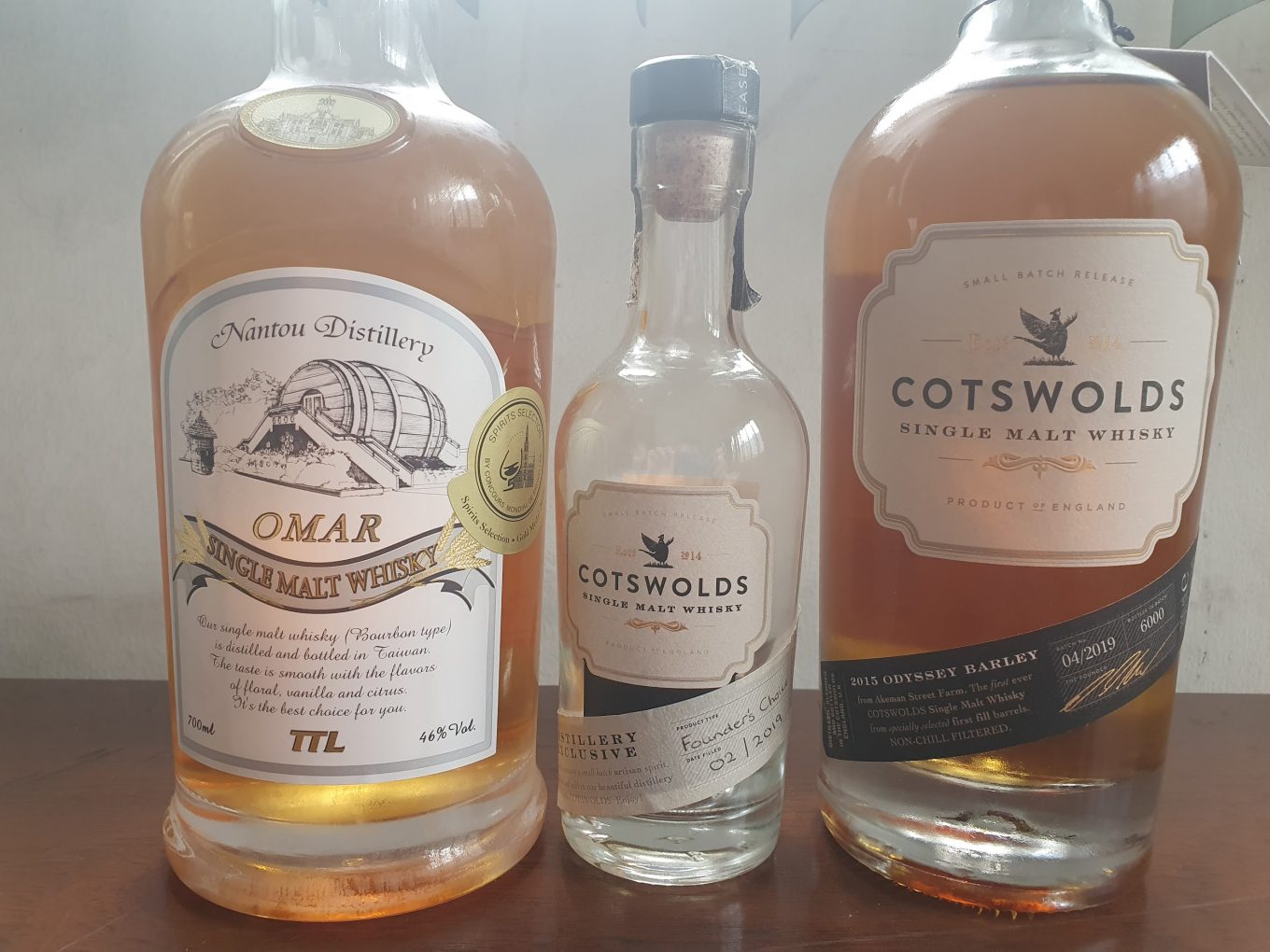 I feel a certain amount of excitement when I know I can experience the growth of someone or of something involved in the f&b scene. Ever since I’ve become more aware of the world, I’ve seen my fair share of local establishments open and progress or just close. In this case, it’s the growth of the quality spirits movement that started decades ago. This golden era of drinking is the result. I may not have even been born yet when this started, but I’m happy and excited to know that I’m closely watching the scene develop. It’s great to know that, as people learn to eat better, people are also learning to drink better. More producers are seeing the value of releasing better products.

Amongst the countries producing single malts, Scotland, Japan and Ireland are pretty much the big three. It is easy to herd these blinkered sheep. You can shave them bald and take chunks out of them. They still wouldn’t mind as long as you can drape them in good marketing and show them pay to win awards. Which is, I guess, single malt producers from lesser-known regions like America, England, India and Taiwan have to stay on their toes. They have to build their reputation by slowly and surely winning the drinkers with senses to be their new fans.

Great Britain. I’ve always wondered what’s so great about it as they, for the longest time, have had to rely on Ireland and Scotland for whisky? I think it’s about bloody time the Englishmen came up with their own quality single malt. Thankfully, the other gents here, especially Adam, have answered my question on what makes Great Britain great. Bimber may be getting the most coverage out of the English single malts. But I think Cotswolds, with their emphasis on local barley, is something to watch out for as well. I’m not going to get into details regarding the distillery as Mark already previously discussed them here. I’m just lucky an importer has the foresight and passion to import lesser-known brands to the Philippines. I’m even luckier he sent me the last drops of a distillery exclusive Founder’s Choice, which I will review with their regular single malt.

When it comes to Taiwanese whisky, the first that will come to mind will surely be Kavalan. They came out at, I think, the right time to take some of the Asian whisky attention away from Japan. But whisky fans should also watch out for Omar single malt, which I already covered, from the Taiwanese government-owned Nantou distillery. I don’t know why they’re not that well known yet. Maybe they haven’t put much into marketing but they’re available in well-known stores like The Whisky Exchange, Master of Malt and Astor Wines. 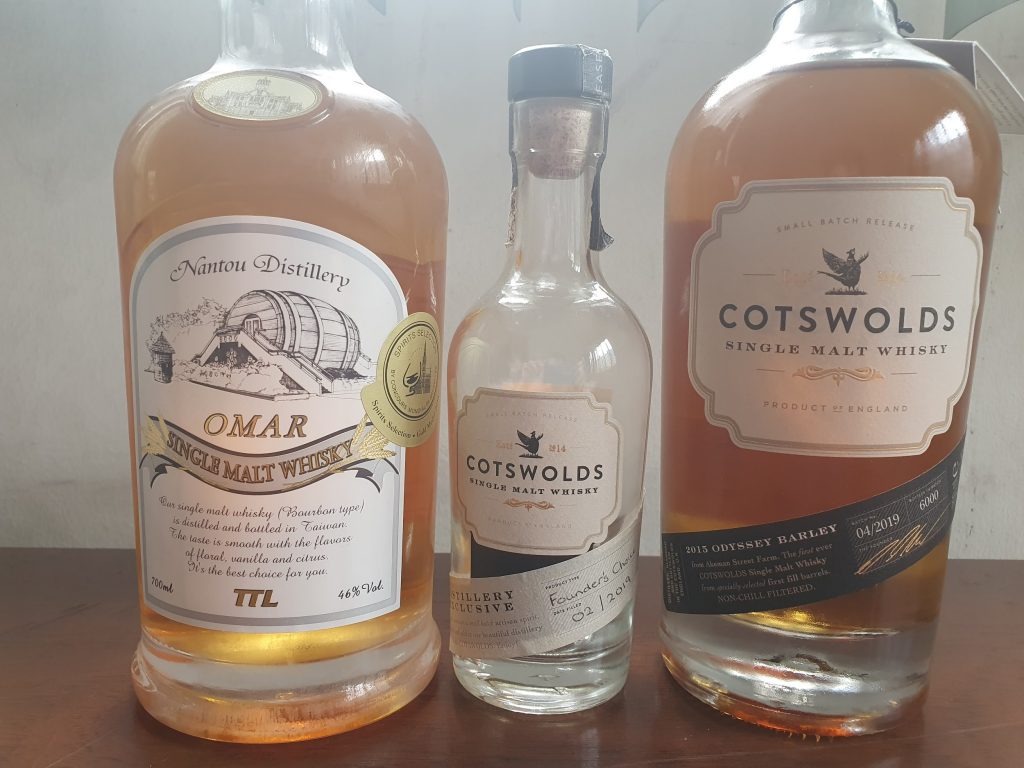 On the nose: I get sharp but pleasant scents of oranges, apples and apricots at the front. Behind it are quick and sharp scents of apples, lemonade and mint mixed with mellow scents of toasted chestnut, barley and mocha. Another whiff gave off cherries, cranberries, a flash of pineapple and lemon peel.

In the mouth: A very citrus welcome. At the front are mixed and incoherent tastes of peppers, lemons, lemon peel, oranges, orange, orange jam and dried apricots. In the middle are more mellow tastes of dried dates, buckwheat, browning fuji apples, orange jam, honey, undertones of cinnamon and mocha. There’s a long and pleasant finish of dried dates, apple juice, hints of cherries, cranberries and ends with something bitter like rosemary and thyme.

On the nose: Like the Distillery Exclusive Founder’s Choice, I get oranges and apricots upfront. But there’s a mix of digestive biscuit, cherry jam and some form of cranberry in there. I get these scents all the way through this “first layer”.  For this “second layer”, I get some mild scents of honey mixed with some fruits like cantaloupe, browning bananas and more cherries.

In the mouth: A mishmash of fruitiness which gives way to herbal notes like rosemary, thyme and some black tea. The ethanol heat persists for a bit which clouds everything. I only get flashes of dried apricot, cantaloupe and honey. After a bit of swirling in my mouth I get flashes of cinnamon, cherry juice and apples. The herbal notes come back only to be enveloped by dried apricots and a lingering digestive biscuit at the end.

I may be jumping the gun by giving the Founder’s Choice a 7. But I really like how surprised this whisky made me.  I also like how expressive this was without having a shart ethanol burn I get in other NAS cask strength single malts. My main complaints with this is it just didn’t linger long enough and there’s lack of complexity and layering.

The nose in the regular single malt isn’t complex but it lasts for a bit and is full of pleasant scents. This ended up making me disappointed in the mouth. All that mellow and relaxed scents on the nose didn’t translate well in the mouth. It was like they didn’t want to be sipped and went into a panic. Most of the tastes in the mouth ended up being less coherent as compared to the nose. But then again, paying $50 for a well made and new single malt is something I won’t complain about.

I think this is a distillery worth watching out for. The label says the whisky was aged in 1st fill barrels. It will be interesting to see their blends change as they’re able to add more variety of casks. I’m looking forward to trying future releases of this single malt with more 2nd fill or 3rd fill stocks blended in them. This is a nice break from having all that double maturation and triple cask hullabaloo.

On the nose: A fragrant mix of floral and citrus scents. I immediately get mellow, but quick scents of green apples, honey, apricots, oranges, starfruit, melons, candied lemon and rambutan.

In the mouth: I get a citrusy zing as the welcome sensation. I like how oily and peppery this is. But the flavors are shy and incoherent. I get consistent undertones of sapodilla. There are weak tastes of green apples, starfruit, kiwi, a flash of cinnamon sticks, banana syrup and vanilla. There’s a sneaky fuji apples, caramel and browning banana flavor at the end.

Firstly, I’m a bit on the fence about this one due to the bottling date. I asked the importer why he has bottles from this date. I was told they’ve had stocks of Omar since 2018. This makes me think the newer bottles of the regular single malt may be different from previous ones. So take this review with a pinch of salt.

I’m a bit disappointed in this after having the regular Cotswolds single malt and a couple of Omar single casks in a previous review. Aside from the mouthfeel, everything just comes up short. I hope the more current Omar releases are better as I’ll be looking for their more current releases to compare in the future.