Look what’s coming down the pike… whiskey from Heaven!

I’ve previously given Heaven Hill a bit of stick about their brands. OK, more than a bit. Though the distillery is one of my favorites and produces some of my everyday go-to whiskeys, their marketing has never sat right with me. The company’s habit of repurposing old names with no connection to the distillery could be overlooked, were it not for the fact that so many of the associated stories have been proven false by whiskey historians.

This culminated in a Tweet in which I wondered aloud, “Is there a better distillery with worse brands than [Heaven Hill]?” Some took this to mean that I didn’t like the whiskeys which, as noted above, could not be further from the truth. To once again clarify: my quarrel with Heaven Hill relates to their playing fast-and-loose with history, rather than any qualms about what’s in the bottle.

The name on the bottle doesn’t really impact the contents, as fans of sourced whiskey are fond of reminding me (repeatedly) whenever I poke fun at this-or-that manufactured origin story adorning yet another bottle of MGP bourbon. Perhaps this malarkey rankles more in the case of Heaven Hill, given the business’ recent history of the types of behavior that whiskey fans love to hate: dropped age statements, or small upgrades to previously affordable whiskeys with big increases in price. In these cases, a bogus or apocryphal yarn seems almost mocking; it’s the insult compounding the injury of having to pay a lot more to get a little more.

The whiskey we’ll be considering today sits at the nexus of these concerns: it is a purchased brand that has undergone an upgrade, with the associated beating of breasts that typically accompanies these changes. The whiskey in question is Pikesville Supreme.

Pikesville Supreme got a superb introduction on Malt back in 2014; please read that piece if you’re interested in the history of the brand. Of most consequence to this review is the fact that Heaven Hill acquired the brand in 1982. Though reference is still made to the Maryland origins of Pikesville Supreme, all the whiskey is now produced at Heaven Hill’s Bernheim distillery in downtown Louisville.

Even subsequent to its sale, this brand remained a favorite in the Maryland market, with the old 80-proof (40% ABV), 3-year-old incarnation being a go-to well whiskey for bar owners and the backbone of many a home bar. This was particularly so given the budget price (around $18/bottle in the middle of the last decade), making Pikesville something like the rye equivalent of Evan Williams: an affordable option for the common drinker.

However, Heaven Hill announced in mid-2015 that Pikesville Rye would be re-launched as a “Super-Premium” whiskey. The proof was raised to 110 (55% ABV) and the stated age was increased to six years; barrels were said to be selected from “high storage,” also known as the upper floors of the rickhouse. The elevated temperatures in these areas results in more evaporation of water than alcohol, increasing barrel proof and creating the intensity of flavor for which Heaven Hill’s other high-potency barrel proof expressions are prized. On paper, these changes were an obvious upgrade

Of course, there’s no such thing as a free lunch. The upgrade came at a cost, similar to what happened with the old Heaven Hill Bottled-in-Bond. The $50 suggested retail price of the new expression is more than 2.5x the cost of the old format, putting it out of the reach of the types of consumers who relied on it for everyday sipping. Though Heaven Hill originally intended to maintain production of the old style (at least for the Maryland market), demand for the new version quickly cannibalized sales of the predecessor bottling. It was subsequently discontinued, to predictable grumbling and frenzied hoarding.

Setting aside both my love for Heaven Hill generally as well as my assorted specific qualms about this or that name or expression, I will now be tasting the old Pikesville versus the new Pikesville. I’m intending to gauge if we’re being provided adequate value for the increased sum of money, as well as assessing the merit of the new rye in the context of comparable available options.

Starting with the older version, I have here a sample that I am enjoying courtesy of Ryan, who was kind enough to send it along. As noted above, this is 80 proof (40% ABV) and aged three years. Again, it retailed for just under $20 prior to being discontinued, which is the price I’ll be using for scoring.

On the nose: Young and grainy, but with lots of herbs and spices. Initially there’s a juvenile rye note that jumps out of the glass, though this quickly gives way to some more intriguing scents of carraway and fennel. These mingle with a dry and smoky note of cigarette ash. There is a meaty aroma of smoked and salted beef. Deep inhalation reveals a sweet and creamy corn note buried under all this, but the overall impression is one of serious scents and ample complexity.

In the mouth: This starts with a watery kiss of wood. The palate broadens out momentarily with a more grainy richness, though this once again regresses into a stale woody note, which becomes the sole discernible characteristic in the middle of the mouth. There’s a slight bitterness on the finish that gives the vaguest sense of being a rye whiskey. Throughout, though, this has the dilute mouthfeel of some of Heaven Hill’s lesser bottlings.

This has a fascinating aromatic profile, incorporating some seldom-sensed smells that, regrettably, find nary an echo in the mouth. Any character this had is drowned by the dilution down to the legal minimum bottling strength.

On the nose: Brown sugar meets freshly cracked black pepper, with a hint of smoke swirling around them both. There’s the hallmark Heaven Hill metallic and citric note in here, but it’s contained within layers of caramelized sweetness and ephemeral smokiness. This has lots in common with its aforementioned Heaven Hill barrel proof counterparts, in good ways.

In the mouth: This starts gently with some more of the richly sweet brown sugar or molasses flavors, but builds quickly toward blooming flavors of steel, pepper and orange peel at the middle of the palate. This lingers with a pure note of rye grain that tips toward metallic as it reaches the corners of the mouth. Throughout, the 110 proof feels like an ideal presentation strength, allowing the flavors to come through clearly without being overwhelmed by the heat of the alcohol.

Compared with its predecessor, this has more in common with the “barely legal” Wild Turkey ryes, which also share a 51% rye mashbill. However, whereas I found those to suffer from a lack of intensity and a lackluster texture, this Pikesville rye delivers the goods in both departments. The high proportion of corn in the mash bill contributes some deliciously rich and sweet notes, comparable to the better bourbon whiskeys in the Heaven Hill stable. However, this retains enough rye character such that it wouldn’t be confused for a bourbon whiskey. It’s every bit as good as – and in some ways better than – the E.H. Taylor rye, the latter also being 50% more expensive. As I scored that bottle a 6/10, I feel confident in bumping this Pikesville rye up another point.

While I feel for the folks who lost their old standby, I’m happy to report that the new version is an upgrade in many ways, justifying the higher price tag. If you’re a rye whiskey enthusiast, the new-format Pikesville Supreme is a competitive option and bears trying, if not buying outright. I’ll continue to remain as steadfast in my criticism of Heaven Hill’s marketing spiels as I am loyal in my purchases of bottles from this distillery, given their capacity to consistently produce very good whiskey.

There are also commission links above if you wish to make a purchase and in doing so, support what we do here daily. 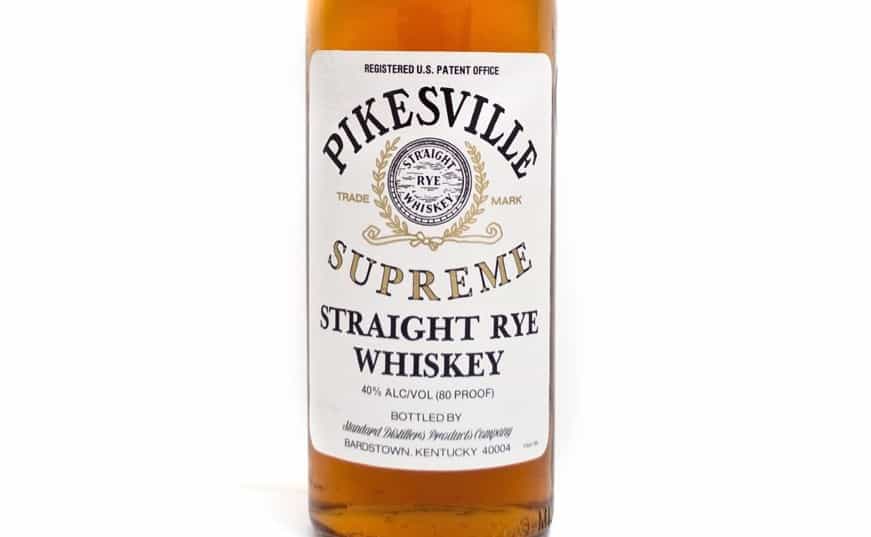