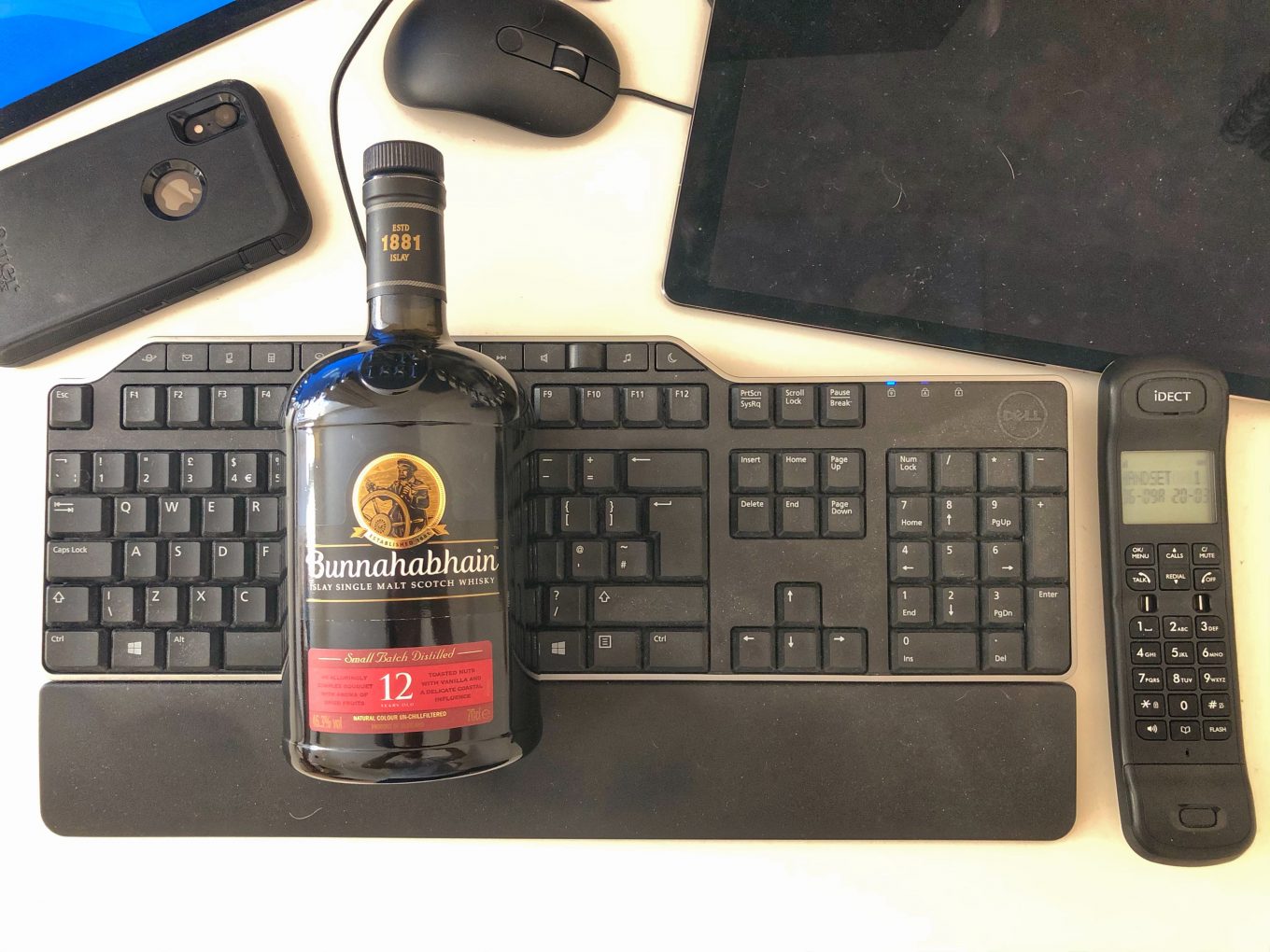 Within whisky circles there are many speculative theories about why it is so difficult to get our hands on the latest bottle of whisky. One of the more controversial is the idea that automatic computer prrogrammes known as ‘bots’ are buying up all the whisky before mere mortals have so much as moved their mouse. I decided to investigate.

Bots have been commented on by Jason here and well discussed on Roy’s Vpub here. But what are these ‘bots’? Bots are software applications that will perform any task they have been programmed for via the internet. These bots are usually utilised for mundane or repetitive tasks. The use of bots can be ‘good’ and ‘bad’. Good bots include those that aggregate news into a single feed or more complex bots that can search for copyright infringement within social media whereas bad bots can include those used to spread misinformation on social networks. Bots in general are becoming an essential part of our daily lives.

Both good or bad, bots can cause problems for any website for example when new content is added to a website the search bots can aggressively ‘crawl’ the website to index the new content this alone can cause high server loads that can crash a website. Whisky industry website crashes are now a regular and frustrating aspect of whisky buying.

Bots within retail in general account for 20% of internet traffic to retail sites. Many of these are price checking bots regarded as ‘simple bots’ and there are more advanced bots that search for specific newly released products. Imperva’s 2020 Bad Bot Report highlights the issues in retail and the ‘Sneakerbots’ that are regarded as advanced persistent bots (APBs). 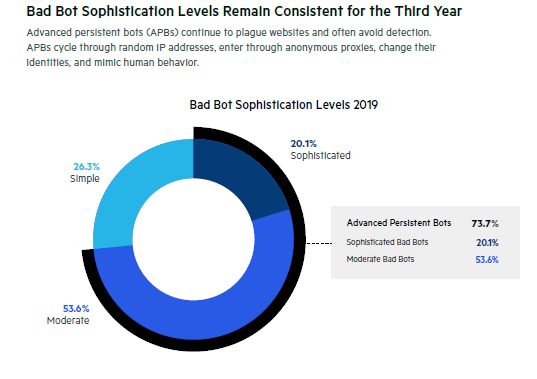 One report highlighting the issues around Sneakerbots for hyped releases revealed almost 100% of internet traffic can come from bots. Third-party companies are now profiting from being the middlemen for sneaker fans creating an ‘Add to Cart’ service where sneaker fans pay a fee to secure the trainers. Examples of bot users securing extreme numbers of sneakers are presented by Queue-It a company that aims to prevent bots. 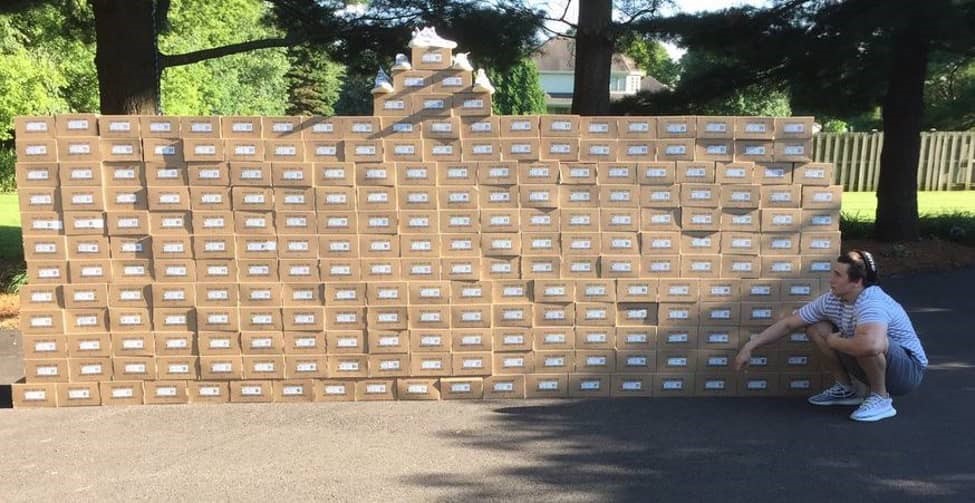 Source: Queue-IT Everything You Needed to Know about Preventing Sneaker Bots

As a whisky fan frustrated seeing releases sell out before the official email arrives in my inbox it is easy to draw the conclusion that Sneakerbots are now used for whisky purchasing. Afterall 84 Arrrrrdbegs at Whisky Auctioneer in a single sale suggests the whisky equivalent of the sneaker picture above.

However, retailers are not seeing the sort of activities described above. When contacted by Malt, Arthur Motley, Whisky Buyer and Director at Royal Mile Whiskies pointed out that “RMW, perhaps more than any other retailer, has spent time monitoring customer behaviour and buyer profiles and simply cannot find any evidence of advanced bots actually making purchases.” Arthur notes that the increase in scraping bots that monitor for new releases or low prices are increasing significantly and those alone can cause weak websites to crash. RMW has invested in protecting against these bots and the other big sites like Master of Malt and Whisky Exchange appear to have done the same. Other retailers report a similar pattern.

So we can fairly confidently say that the Sneakerbots phenomenon has not transferred to whisky. So bots are not automatically purchasing whisky in any detectable volume. But there is plenty of evidence of the development of Whisky Watching services providing email updates using new release scraping bots for a significant monthly fee. But before you rush out and start googling you should be aware I have also encountered many free ‘communities’ offering the same service for nothing. One Slack based service recently updated members on the status of their bots:

The Slack community mentioned above has more than 400 members already and appears to be growing by about 50 per week. That’s already more people in one forum than the number of bottles available in a typical single cask release. There is evidence of a significant number of ‘new release’ bots all working at the same time: 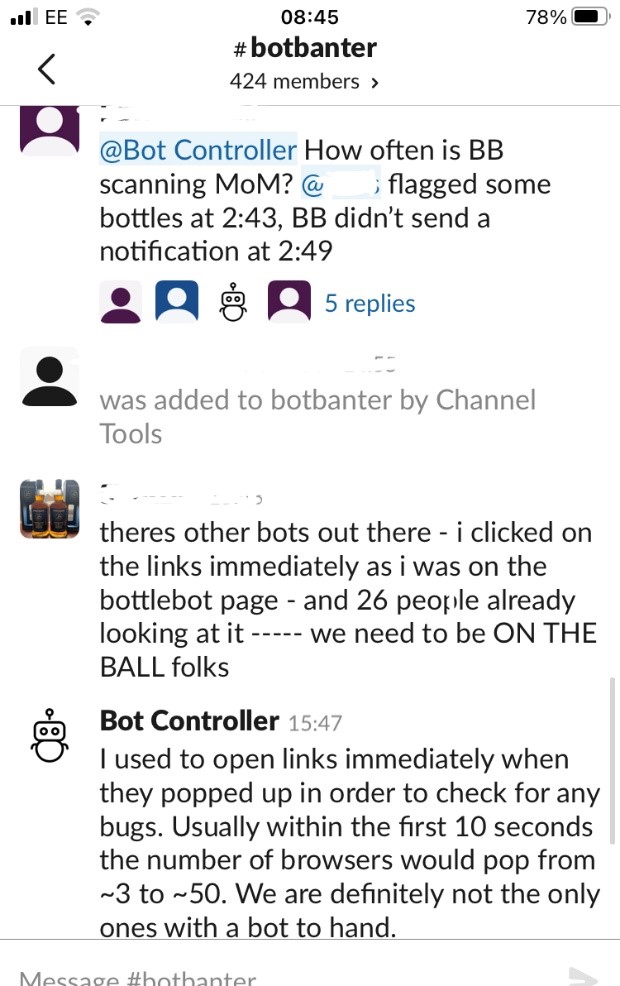 I reached out to other retailers to gauge their experience. Jerome Marks-Gardner of Nickolls & Perks, suggested that there is a perfect storm involving “the growing crowd of genuine whisky enthusiasts; plus limited stock of these sought-after releases” along with “website bots that allow you to complete checkout within seconds, notification alerts for new products hitting websites” and “the proliferation of information about quick returns from whisky investment.” The days of finding a recent release on a shelf, or a dusty bygone release still at retail are now consigned to fireside legend. Expect more ballots and shop only offers as N&P try to get the whisky to the whisky-lovers.

Stuart Easton of Luvians in Fife agrees that it’s not robots that are getting between you and the next release but your fellow whisky buyers. “We regularly get 10,000 entries at ballot for their allocations of sought after whisky like Daftmill. Actually whisky enthusiasts are really well informed these days and often know before we do when the next release is scheduled!” Luvians do not send orders to auction houses and do what they can, as a small business, to combat the flippers. Their recently developed idea is to hold back some allocations to sell by ballot at the end of their online tasing sessions. With no guarantee of a bottle, it should ensure that the flippers are deterred, and only serious whisky lovers remain in the small tasting ballot. 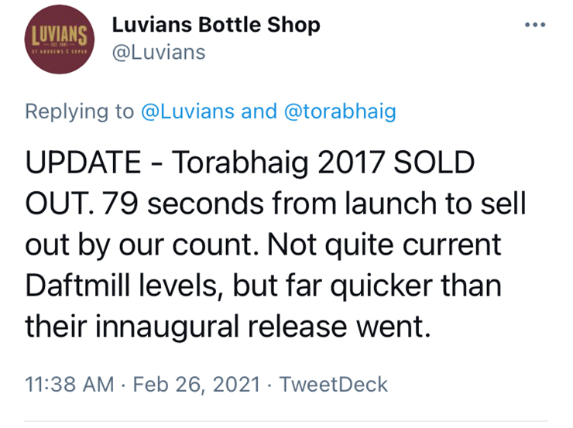 You can conclude that the proliferation of ‘new release’ bots that inform prospective buyers of new whisky the moment it is posted on a website is narrowing the purchasing window from minutes to seconds. This results in the frustration of receiving an email about a new release and clicking through only to find it sold out.

It’s also worth noting that a single poorly coded bot can send tens of thousands of requests to a retailer’s site in minutes, which can be enough to cause outages on some websites. Recently a whisky distillery website suffered a significant unexpected outage on the release of a single cask after over 40,000 visits to the page within a couple of hours and a couple of thousand for any given second in the minutes after the release went live. Of particular note is that just one IP address was responsible for over 7,000-page refreshes indicating bot automation rather than a frantic human; one bot was responsible for 17.5% of the traffic. There were only ever 327 bottles available. 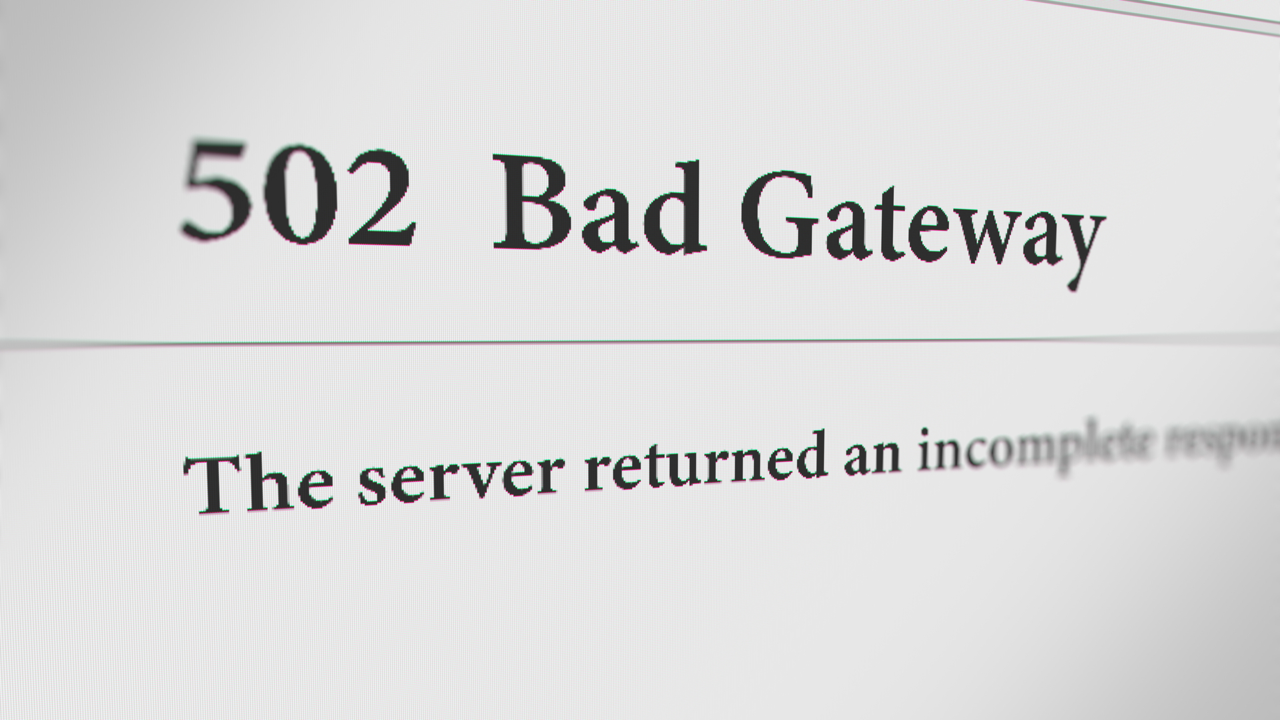 Could more complex bots be developed for Whisky retailers? I contacted code writers on the Freelance site Fiverr who were confident they could write a myriad of complex APB bots for the retail price of a bottle of Arrrrrdbeg. However, the coder had never done it for whisky before. As tempting as it was to gain a competitive advantage the risk of handing over a significant amount of personal data including full credit card details to someone the other side of the world I only know as ‘mm80dxion’ to create code seemed exceedingly risky for whisky! One code writer in my whisky club quickly wrote some code that would find a bottle on Master of Malt add it to the basket and open up the basket tab ready for personal details. Whilst the speed and ease of writing the code were impressive the actual performance of the code was surprisingly slow; certainly, it was no quicker than if I had completed the purchase myself. I’m not sure how APBs would handle the website crashes we often see on release days either.

In some ways, the winds of change are already blowing in a worrying direction but there are significant barriers to the adoption of APBs which will hopefully ensure whisky drinkers remain in with a chance of securing interesting releases. One is the distributed nature of whisky retail which significantly differs from sneakers or other streetwear that are often released from a single site. Desirable whiskies are spread thinly around multiple retailers. A prospective purchaser would require a specific bot designed for each retailer and their specific checkout process; regularly maintained and adjusted for any changes. This requires a reasonable level of skill at programming and coding that is beyond most.

It would appear that this competitive situation is here to stay. With so many new distilleries entering the market this clamour can be positive; buoyant prices help attract investment and give some financial certainty going forward which is great for Scotch whisky in general. So far COVID has failed to significantly impact whisky sales despite bars and restaurants around the world being closed for the best part of a year. Some have suggested that working-from-home has allowed more people to bottle chase online as no one is looking over their shoulder at what is on web browsers.

As whisky consumers; we’ve got to ask ourselves if the final pleasure is worth all the pain. Does the stress and frustration, not to mention wasted time, tracking down a limited bottle actually result in equivalent levels of pleasure when you drink it? Perhaps a greater pleasure/pain balance would be to quietly revisit the gems within the core ranges that can be found far and wide all of the time. And remember that if you do really want the latest single cask of whatever you need to be fit. Because when you miss out it will be not because you have been cheated by a bot but rather the buyers who you are competing against are well practised and experienced and simply more nimble around these sites than you or I. And as for acquiring your own bot? Retailers and distilleries are more aware than ever of the issues and are likely to take steps to combat the current issues and will be monitoring for suspicious transactions; I expect the time advantage currently bots provide will diminish quite rapidly. Then you’ll only have to contend with the other humans rapidly refreshing their browsers for whatever bottle you are after.

For a review I selected one of the most overlooked whiskies on the market. The Bunnahabhain 12. Malt Review has recently featured Bunnahabain from Scyfion, a range of specials, and over the years everything from 7 year old distillery exclusive from 2016, to 28 year old single casks from Thompson Bros.

As far as I can see the 12-year-old has not been covered on Malt before. Overlooked indeed. Prices for this whisky can be discounted as low as £30, Master of Malt at £38.95 and more regularly around £45. I picked up this on sale from Loch Fine Whiskies for £35.99 stress free and without it selling out before I completed the checkout process! It is 46.3% and non-chill filtered or coloured; already ticking plenty of boxes. Each batch is composed of a mixture of Sherry and Bourbon Casks. 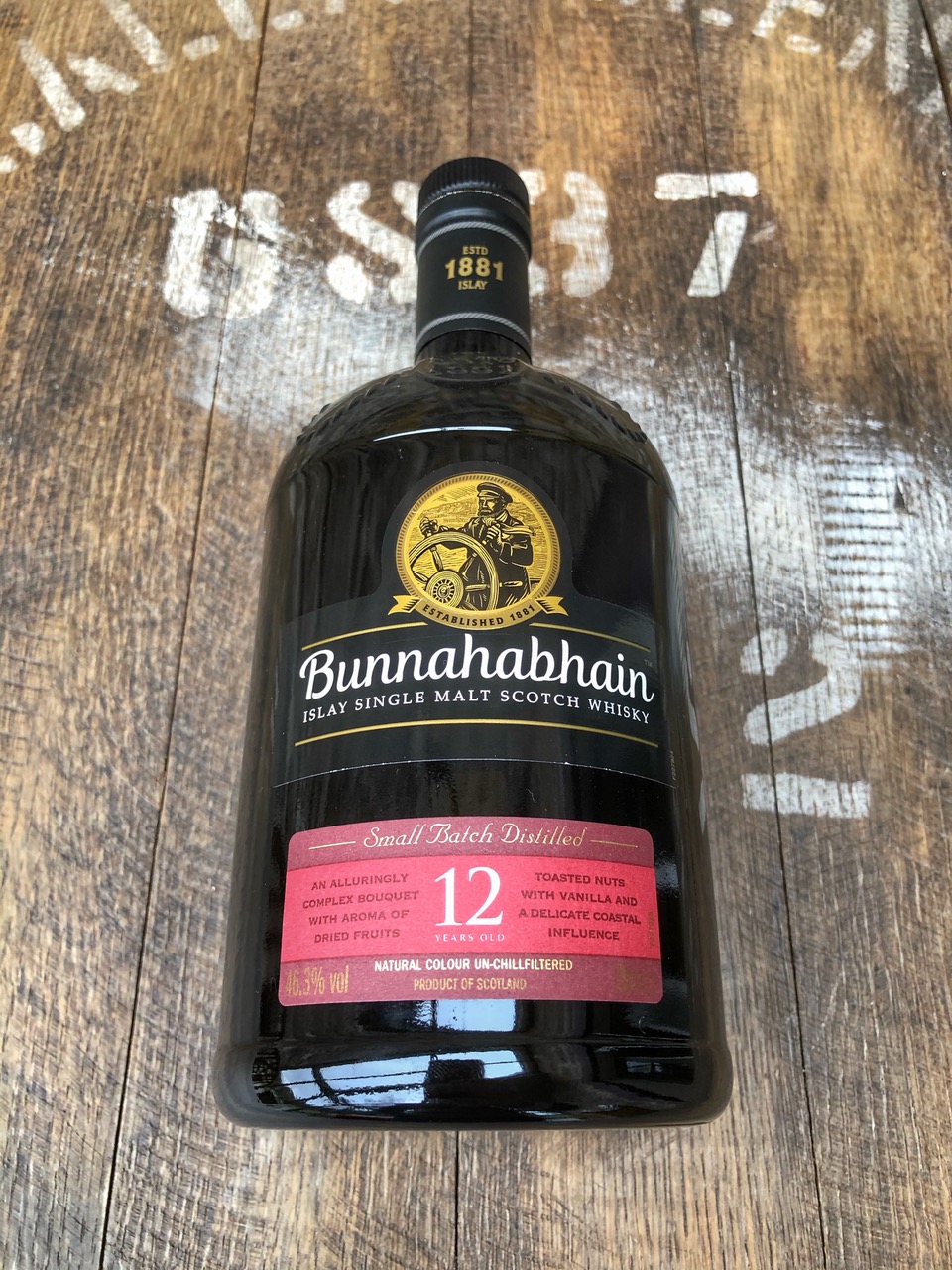 Colour: Burnished Copper – Whisky with this hue at this price is usually artificially coloured; all natural here.

Nose: Generic oloroso opening up into raisins and dried figs, new leather, some spirit lead brightness followed by Christmas Cake. Is there some slight salty coastal notes or am I just hopeful? A gentle floral note; perhaps walking on the wild flower machair.

Loads of sherry to tame the raw spirit which bursts through at the back end of the palate. It does not drink as old as 12 years perhaps more like an 8 year old. It’s uncomplicated, sherry forward but for the price range there is reasonable complexity. This is one of the best releases in the price range and should be a staple for everyone’s drinks cabinet. One to sit back and enjoy without ever once worrying about the secondary market.