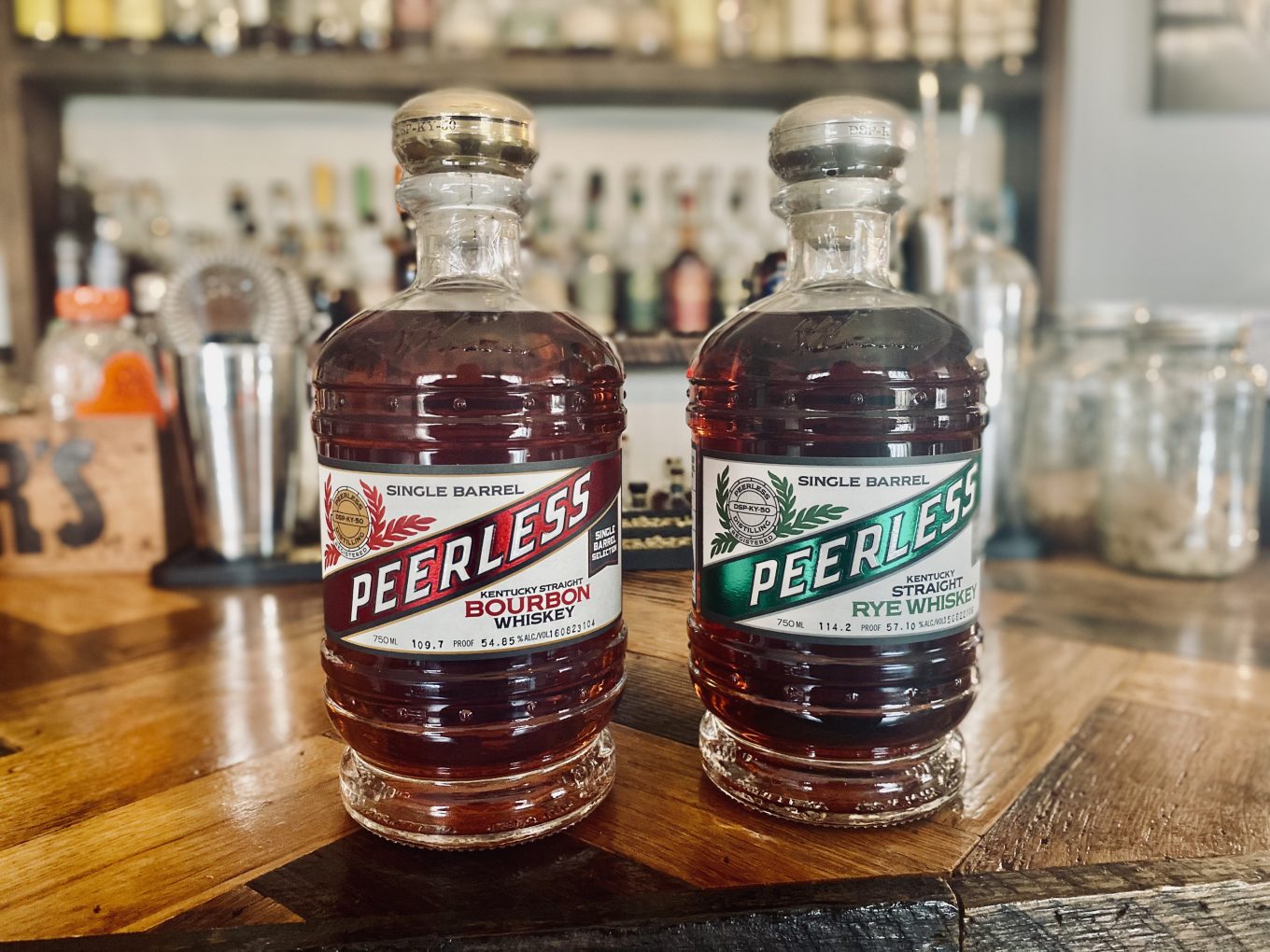 The preponderance of store picks of individual barrels of whiskey has forced shoppers to become more savvy. For all the perceived scarcity in whiskey, in actuality, there are more bottles than can be accommodated with our finite time and resources. Most of us have limited budgets; we’re not able to buy a bottle of every single pick that comes to our attention.

A recent stroll into the flagship location of a Chicago-area beverage chain brought this dilemma into sharp relief. The “Hand Picked” table had 51 “different” whiskeys on it, all of them single barrels selected by the store. Six Wilderness Trail ryes, six Rossville Union ryes, and nine Knob Creek bourbons mingled with various other one-offs. A completist looking to take home one of each bottle would have amassed a tab of nearly $3,000 after tax.

Now, I’m not familiar with the specific financial situations of most of our readers, but I’d be willing to wager that this amount of money is in excess of most people’s monthly – if not annual – whiskey expenditure. Keep in mind, $3,000 was just the bill for the picks from a single shopping trip to a single store. Some discernment is clearly necessary for anyone dipping a toe in the ocean of whiskey bottled as single barrel selections.

So, how do you decide which bottles to spring for? The best method is to frequent stores that have a bottle of their currently available picks open to sample. Even then, a hurried sip from small plastic soy sauce cup will likely give only the vaguest sense of the quality (or lack thereof) of a whiskey. The introverts among you will hate what I’m about to say, but: the only surefire method is to make friends with – or, at least, acquaintances of – the folks doing the picking.

A conversation with the pickers can quickly reveal the particulars necessary to support an informed purchase. Was this an actual pick, or was the barrel selected for the store by the master distiller? Was the selection done on-site, or from samples provided by a representative? Were there multiple barrels offered, or was this a “take-it-or-leave-it” barrel that was the remainder from other stores’ picks? Did the person or people doing the picking look for an off-profile barrel, or is this similar to the core expressions from this distillery’s range? What aromas or flavors stood out?

All this is germane to today’s review, as I bought not one but two bottles – untasted by myself –picked by people I have never met (in person) employed by a store that I have never visited.

What made me decide to take the plunge? Well, you remember Ryan Alves from Justins’ House of Bourbon; their preternaturally delicious pick of a New Riff bourbon barrel, subsequently dubbed “Quarter Pop,” has become a thing of legend. I know that the Justins’ team has discerning palates, do their own picking, and actively seek out off-profile barrels with aromas and flavors diverging noticeably from the respective distilleries’ benchmark expressions.

Knowing what I do about them, their ethos, and their track record, I’m clearly willing to purchase a pick at random from them. I was further incentivized, in this case, by the fact that both barrels were from one of my favorite up-and-coming distilleries. Kentucky Peerless Distilling Co. has been toward the top of my list since I first tasted their bourbon; please refer to my in-depth interview with Master Distiller Caleb Kilburn if you’re interested in the back story and process.

I previously enjoyed a Peerless single barrel bourbon, which I found very good for the price. However, Malt’s run-ins with the single barrel ryes from this distillery have turned up some hits, some misses, and some ‘tweeners. As Adam noted in his out-of-consensus panning of a single barrel rye, Peerless has elevated the bar of expectations for itself to a height that is difficult to clear consistently.

We’re now at the fateful nexus of promising distillery, accomplished store pick program, and a pair of pricey bottles of bourbon and rye. To further complicate matters, each of these has been given an appellation in recognition of their most salient feature. I’m usually ambivalent-to-slightly-negative about what I have previously called “the Jedi-mind-trickery of suggestion” that results from tasting notes being provided in advance. It feels a bit like cheating on a test by getting the answers ahead of time. All I can do is attempt to evaluate these without regard to their respective cognomens. 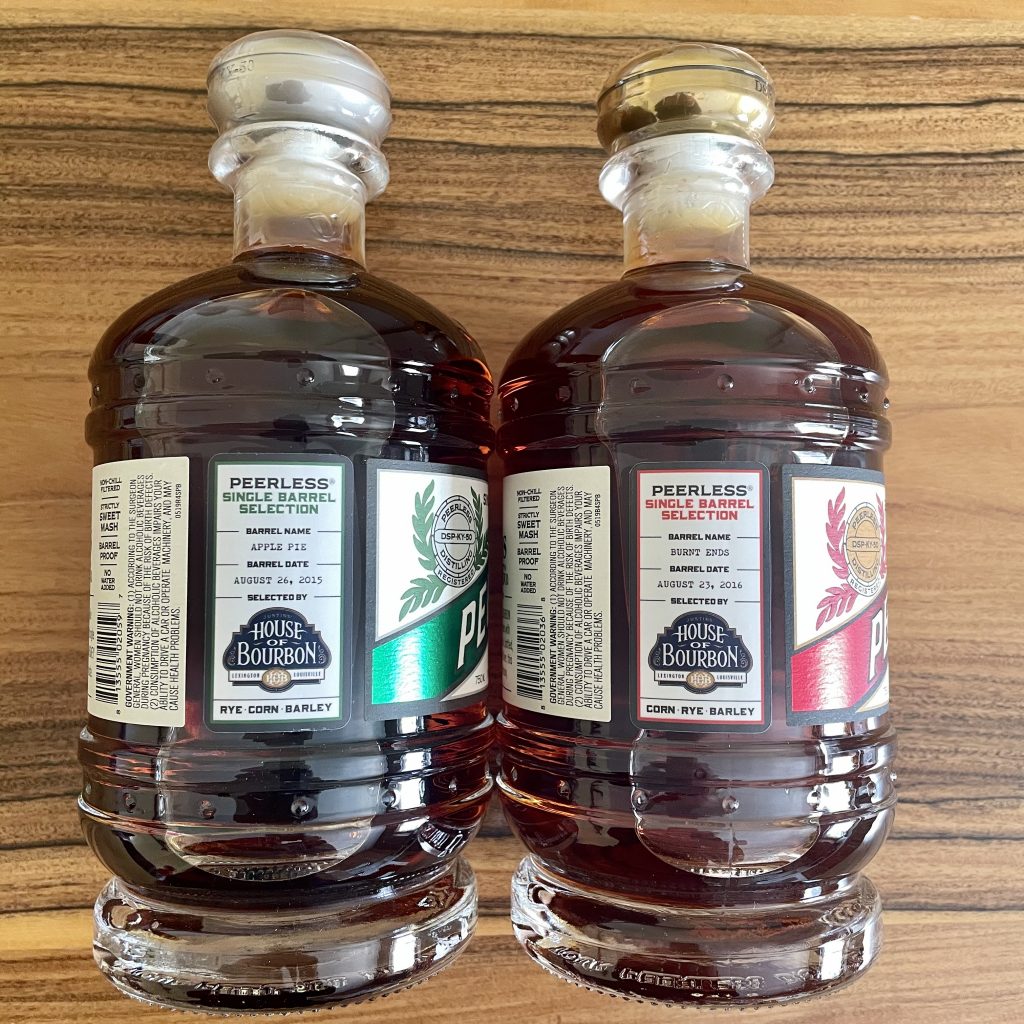 I’m starting with the bourbon, dubbed “burnt ends.” For those readers not familiar with this regional delicacy: burnt ends are a by-product of barbecue beef brisket, a cut of meat from the chest of the cow. Traditionally preferred by those chefs west of the Mississippi river (especially in Kansas City and Texas), brisket is marbled unevenly (cooking thus as well) resulting in the overcooked, fatty margins of the cut being sliced away and thrown into stews or served, slathered in BBQ sauce, as an amuse-bouche. Like rib tips (another BBQ castoff), they became a fan favorite in their own right.

On the nose: Starts with a plump and round note of ripe McIntosh apples married with a polished woodiness. This tacks toward a floral sweetness for a moment, before a musty, funky scent reminiscent of dusty old-time whiskey emerges as a delightful surprise. There’s a note that combines the citric sourness of freshly cut lime wedges with a pert note of limestone. Only toward the end do the promised burnt ends make an appearance in all their sweet, savory, and smoky glory. Some more time in the glass reveals more herbaceous scents of pine needles and tobacco.

In the mouth: In keeping with the Peerless house style, this is very lean and elegant to start. There’s a stony note that greets the tongue and proceeds toward the middle of the palate with the faint flavor of hot cocoa. At the middle of the tongue, his takes on an almond flavor that lapses over into a slightly uncomfortable bitterness. That taste meets with a red cherry flavor that lingers through the finish, which again allows the stony notes to re-emerge and creep back along the gum line toward the front of the mouth. After a brief pause, a bready and yeasty aftertaste emerges, as well as some acrid smokiness.

The nose on this is so good, it had me wondering whether a perfect score might be in order. This speculation was premature, though, as the palate came off as disjointed overall, a consequence of having been pushed to extremes in places. While there’s a lot to like about this one, there’s also some obvious areas of improvement. Balancing the very high highs with the moderately low lows, and taking into account the higher-than-average price, I am left awarding this a score at the middle of the range.

Moving along to the rye: this whiskey is called “Apple Pie,” a name which evokes all manner of pleasant sensations for me. Apple is second in my sweet pie standings (trailing only pecan and coming in above pumpkin), a ranking which I deliberate over with much seriousness. My grandmother used to send me home with her irresistible take on this American classic in the style of Dutch apple pie, slices of which would become a decadent breakfast for the following week. Again, I’m of two minds about this: I don’t like to be told what I’m about to smell and taste, however if I am going to be told what I’m about to smell and taste, few combinations of words get me as excited as “apple pie.”

On the nose: Characteristically Peerless in its presentation, this starts with the sense of being muscular (but not brawny), lean (but not weak), and elegant (but not restrained). There’s the promised apple pie aroma (itself enough to make me want to get a bottle, given my aforementioned proclivities), but the remarkable thing is how multilayered this aspect is. I get a baked doughy note of flaky pastry crust, the cinnamon-accented gooey sweetness of the pie filing, and even a rich creaminess of French vanilla ice cream, as though this were a slice served à la mode. Lingering behind this are the scents of a handful of crushed mint leaves, a dried floral note of potpourri, some salty nuts, and more of that polished woody note that I am also learning is a Peerless hallmark.

In the mouth: At the very front of the mouth this has a marriage of brown sugar, mint, and whiskey that are seamlessly combined into another uncanny note, this time of mint julep. That sensation transforms into an aromatic floral note that rises up the front of the tongue in a wave, coming to a crescendo in the middle of the palate. The whiskey then pivots to a creamy note of vanilla, but with the chemical intensity of vanilla extract, which glides gently into the finish. There’s a lingering woodiness of a different variety, a bit drier and accented by a hint of black licorice candy.

The nose on this was a delight, similar to the bourbon. While those aromas didn’t translate directly to flavors on the palate, the end result is a better balanced and more enjoyable whiskey in the mouth. Of the two whiskeys, this rye is bottle I’d be most likely to purchase again. Reflecting that, I’m scoring this two notches above average.

I’m happy to report that going back to Justins’ paid off with one solid whiskey and another very good one. While the Peerless bourbons I have tried have shown minimal deviation from the mean, the ryes have been more variable for my tastes. This Apple Pie barrel is the best one I have had yet; all the more reason to rely on trusted selectors when going the store pick route.