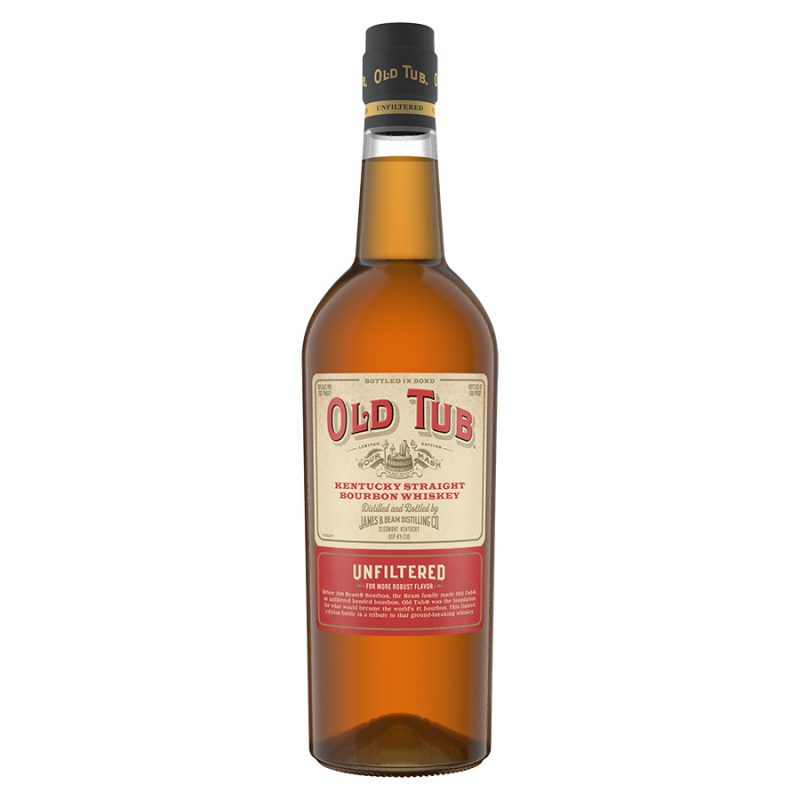 Is this the old new one, or the new old one?

The name says “old,” yet this whiskey will be new to most of our audience. It harkens back to a whiskey from long ago, yet it has been produced contemporaneously, albeit with limited availability. The whiskey in question is Old Tub.

There’s a richly detailed history of Old Tub by Chuck Cowdery which is worth a read. In days gone by, Old Tub was the Beam family’s largest selling brand and the namesake of one of the company’s distilleries. Cowdery speculates that the “tub” in question refers to the wooden vessels in which the mash was cooked; the name was apparently selected to give the whiskey a nostalgic feel. There’s a competing theory that this refers to the holding tubs for whiskey, from which individual consumers would be able to fill their own bottles, mayonnaise jars, or whatever other containers were at hand. Regardless, the brand fell out of fashion after prohibition and became an afterthought, pushed aside in favor of the ubiquitous Jim Beam.

I previously mentioned Old Tub in the context of its former incarnation as a distillery exclusive. Since that time, Beam Suntory has decided to release this expression as a “limited edition.” If you’re a grizzled cynic like me, the combination of these words has already set your eyes rolling skyward. Falling for the contrived scarcity implied by this appellation is a misstep befalling only the most naïve and credulous of bourbon consumers, or those with the most incorrigible cases of FOMO.

In the interest of fairness, I’m prepared to suppress my naturally skeptical approach and judge this on its own merits. What, precisely, might those be? What is this whiskey? How is it different from anything else we get from Jim Beam?

Jim Beam’s own site for the brand offers the following background: “Before Jim Beam Bourbon, the Beam Family made Old Tub, an unfiltered bonded bourbon which was the foundation for what would become the world’s #1 bourbon. This limited-edition offering is a tribute to that groundbreaking whiskey. Just like the original Old Tub liquid, this Kentucky Straight Bourbon Whiskey has not been carbon or chill filtered – only quality screened to remove bits of barrel wood to showcase the true, rustic character of the whiskey.”

Based on my prior experience with a Jim Beam limited edition (the disappointing Repeal Batch, also distinguished by its approach to filtration), I wouldn’t have the highest of hopes for Old Tub. However, there are some hard technical aspects that suggest we might be getting more for our money in this case. Certainly, the higher proof is an initial improvement. The lack of filtration is a further source of potential upside. There’s also the bottled-in-bond designation, guaranteeing that this is coming to us at a minimum of four years old. All of the above point to this being more compelling than its predecessor.

As for the price: a 750 ml bottle of this retails for the SRP of $23 at my local, which doesn’t jack up expectations in the way that a premium price tag might. In total, I’m slightly more optimistic about this one. Let’s see if my hope is rewarded?

On the nose: Pleasant nose, packed with fresh, floral, and fruity aromas. Initially, there is the green scent of freshly cut grass dampened with dew. There’s a creamy milky note that transitions into ripe cantaloupe. Underlying all this is a subtly caramel-inflected woodiness, as well as a moistly meaty note of roasted chicken breast. This is rounded out by a return to vegetal notes, this time of a bouquet of flowers with a gentle accent of limestone. Finally, there are distinctive notes of raw cacao and kola nut, which gives this an exotic bent. While there is a noticeable youth to this, it’s balanced by the aforementioned high points.

In the mouth: Starts with a subtle kiss of peppery spiciness that persists in the form of a tingling sensation on the lips that never really dissipates. There’s another youthfully woody note in here as the whiskey meets the front of the tongue; in flavor and texture terms, this tastes a lot like Evan Williams Black Label. This tacks buttery as it moves toward the middle of the mouth, where it evolves into a full-on butterscotch flavor. There’s a chocolatey woodiness as this moves toward the finish, which happens to be the weakest part of the whole experience. But for a momentary flavor of lime this fades rapidly; there’s a lingering butterscotch note that coats the top of the mouth, but otherwise this mostly disappears texturally.

There’s a lot of whiskey here for $23. The nose is just lovely; this is so delightful and pleasing to sniff at. The palate has some charms, with that lingering butterscotch flavor being a conspicuous one. Texturally, this is most compelling in the middle of the mouth, where the buttery feeling is most apparent and argues most convincingly for the merits of the unfiltered presentation.

On the price and quality axes, this whiskey is nearly the equal of Wild Turkey 101, or some of the lesser batches of Evan Williams Bottled-in-Bond. Whereas I guffawed every time I noticed the Repeal Batch lingering on the drugstore shelf (not as limited an edition as promised, apparently), I certainly hope Old Tub hangs around.

This was a generous sample from Dave, who has my sincere thanks. Photo courtesy of Jim Beam.