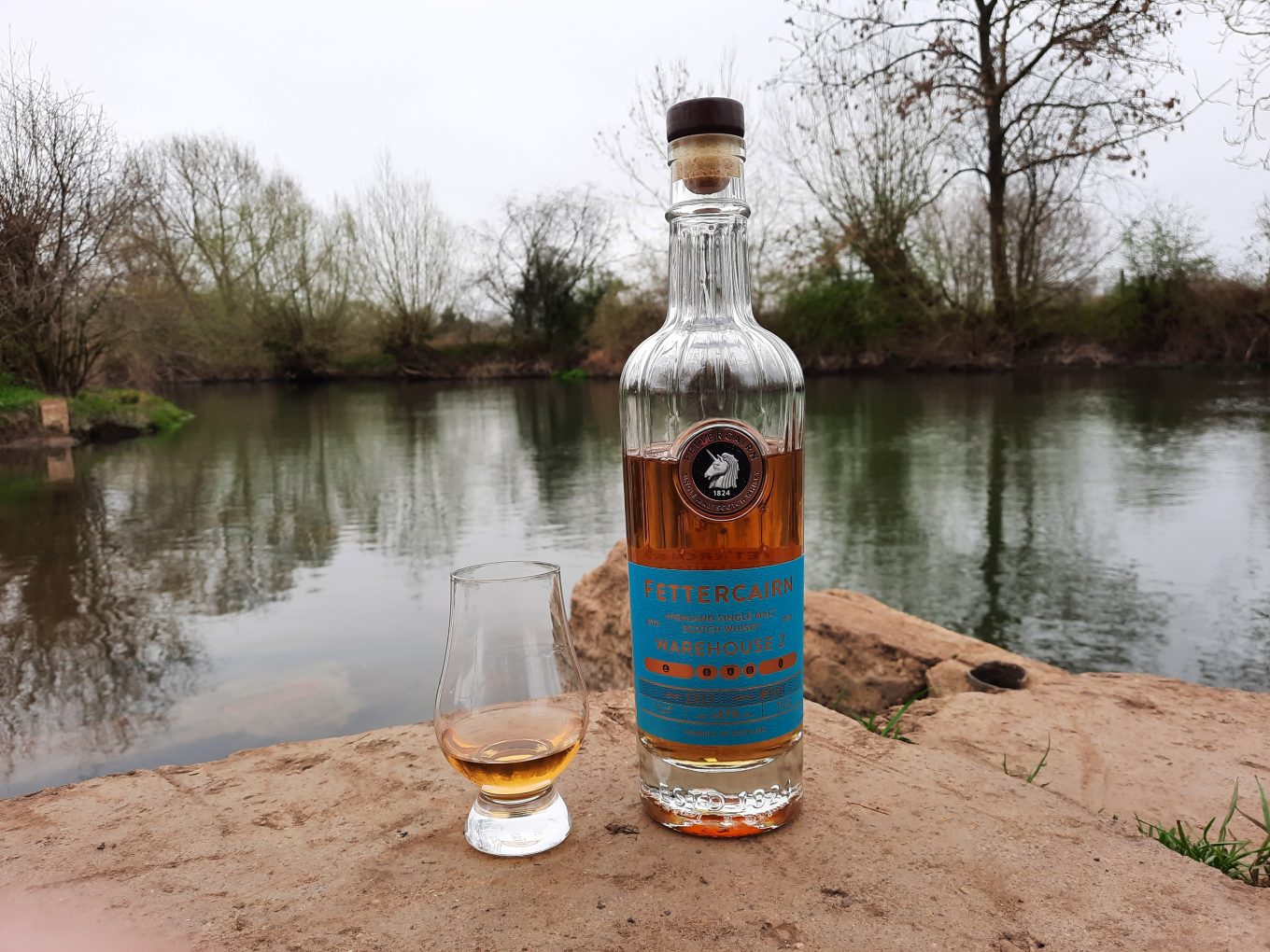 A few years ago, if you told me that a new Fettercairn whisky release could sell out instantly, then I wouldn’t have believed you.

Fettercairn had for a long time been neglected as a single malt, nearly all destined for blending, and presented poorly in expressions such as Fior and Fasque, that seemed more of an afterthought from owners Whyte and Mackay rather than a genuine attempt to promote the distillery. Yet, in the last month or so, not only has Fettercairn’s Warehouse 2 release flown off the shelves, it has also been selling for over three times RRP on whisky auction sites.

There are a couple of reasons for this, beyond the simple observation that the whisky world has gone mad. This release has “Batch 001” on the label, and like any other limited first edition in the realm of retail, this makes it an attractive proposition. The number of whisky enthusiasts, bottle flippers and investors continue to rise, all after a very limited number of bottles, now aided by bots and social media postings in their pursuit of desirable releases (see Graham’s recent article for more information on this). Anything of interest now sells rapidly.

Secondly, Fettercairn is a distillery that looks to be set on a positive trajectory. It has come on leaps and bounds in the last few years, beginning with the much-needed 2019 relaunch of its single malt range. Like Jason, I had found Whyte and Mackay’s desire to position Fettercairn as a premium brand to be a bit presumptuous, especially given previous offerings, but the whisky within the newly designed bottles was a marked improvement on what had come before. The 12 Year Old is easy drinking, full of light and creamy tropical notes, and is not only a pleasant daily-sipper, but also gives a good base for cocktails. The 28 Year Old is a chewy, elegant, and tropical dram, with good weight and character, that comes as a pleasant surprise given the fairly low bottling strength of 42% ABV.

Whilst we all know that a fancy bottle design and good presentation is secondary to the liquid that it holds, the shape of the new bottles, and the updated colour scheme, point towards a unique element within the Fettercairn distillation process. Namely the ‘cooling ring,’ which was added in the 1950’s, which is a relatively recent development in the lifespan of a distillery that began production way back in 1824, straight after the law allowed for the licensing of distilleries in 1823.  I reached out to Andrew Lennie, Fettercairn’s brand ambassador for more on this, and in conversation gave the following information: 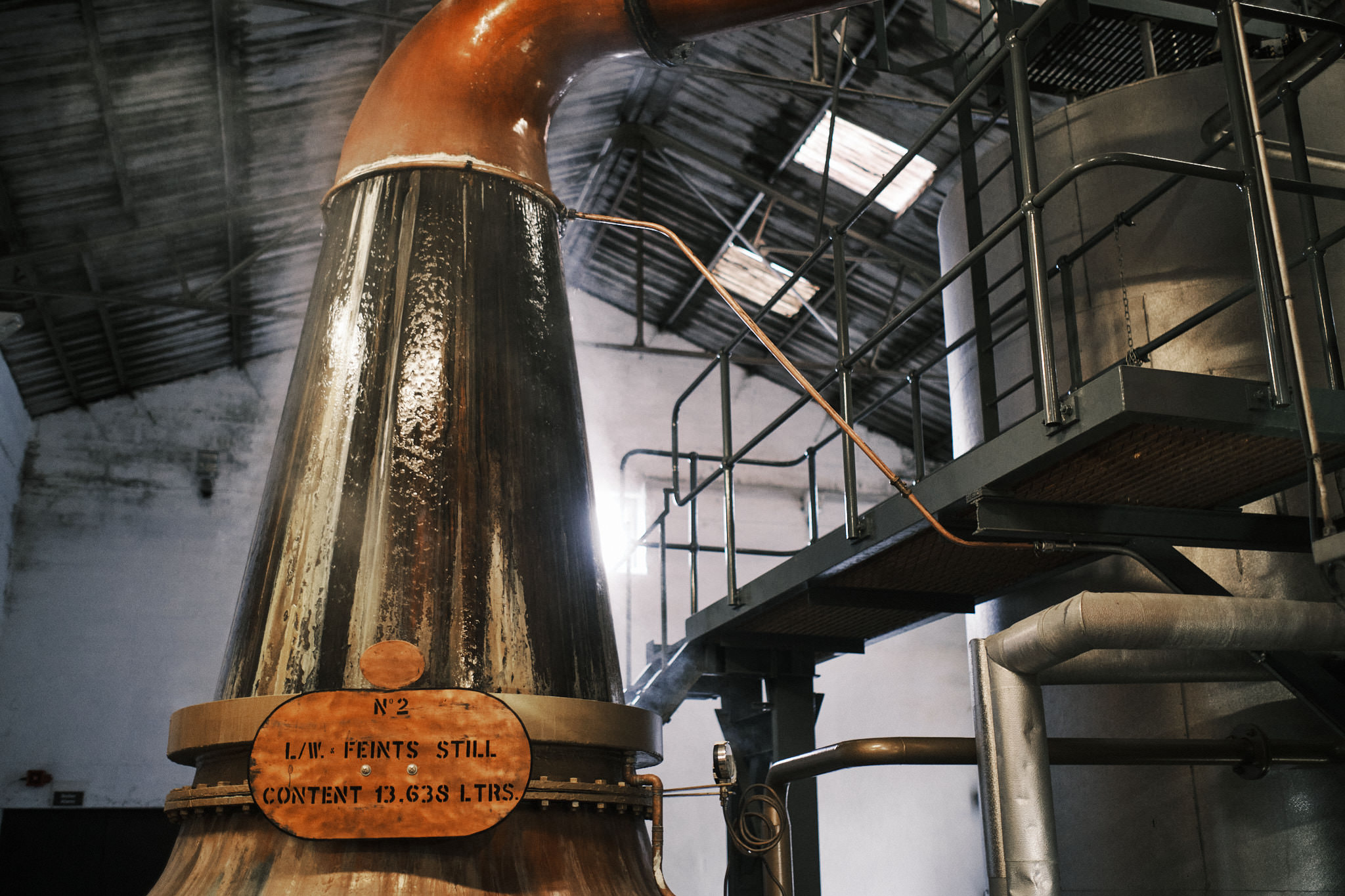 In the 1950’s, newly appointed distillery manager Alistair Menzies wanted to freshen up and lighten the spirit. He was bit of a forward thinker and inventor, to the extent that he even led a failed attempt at introducing a rapid form of whisky maturation. There was high demand for a light spirit from blenders at the time, so different ways to achieve a more desirable spirit at Fettercairn were considered, and the solution was an innovative one, the ‘cooling ring’.

You can see it represented on the neck of the new bottle design. This cooling ring, fitted to the top of the spirit still, releases water from the local spring down the outside of the still, and this affects the rising vapours due to the cooling effect on the copper, almost creating a vortex inside the still. The increased levels of condensation mean that only the lightest vapours can rise from the still, resulting in a light spirit being produced. In the 1950’s there was only one spirit still at Fettercairn, but when the distillery expanded, adding a second set of stills in the 1960’s, the cooling ring was reproduced and added to the new spirit still as well.

The cooling ring is given much of the credit for the quality of the resulting spirit, which has light and tropical notes, including pineapple, mango, peach, and melon that are consistently present in the Fettercairn distillate. It also has the side effect of tarnishing the copper, leading to the stills taking on a teal coloration as the copper has oxidised, which is then reflected in the colour scheme of the rebrand.

This drenching of the stills also gives the still house at Fettercairn a humid, sauna-like quality, that gives a unique distillery visitor experience, whenever such tours become possible once more. There are of course other elements that effect the whisky produced, including the cast iron mash tuns, that have a tumble rake, which leads to a cloudy and biscuity wort, wooden wash backs, and the dunnage warehouses. 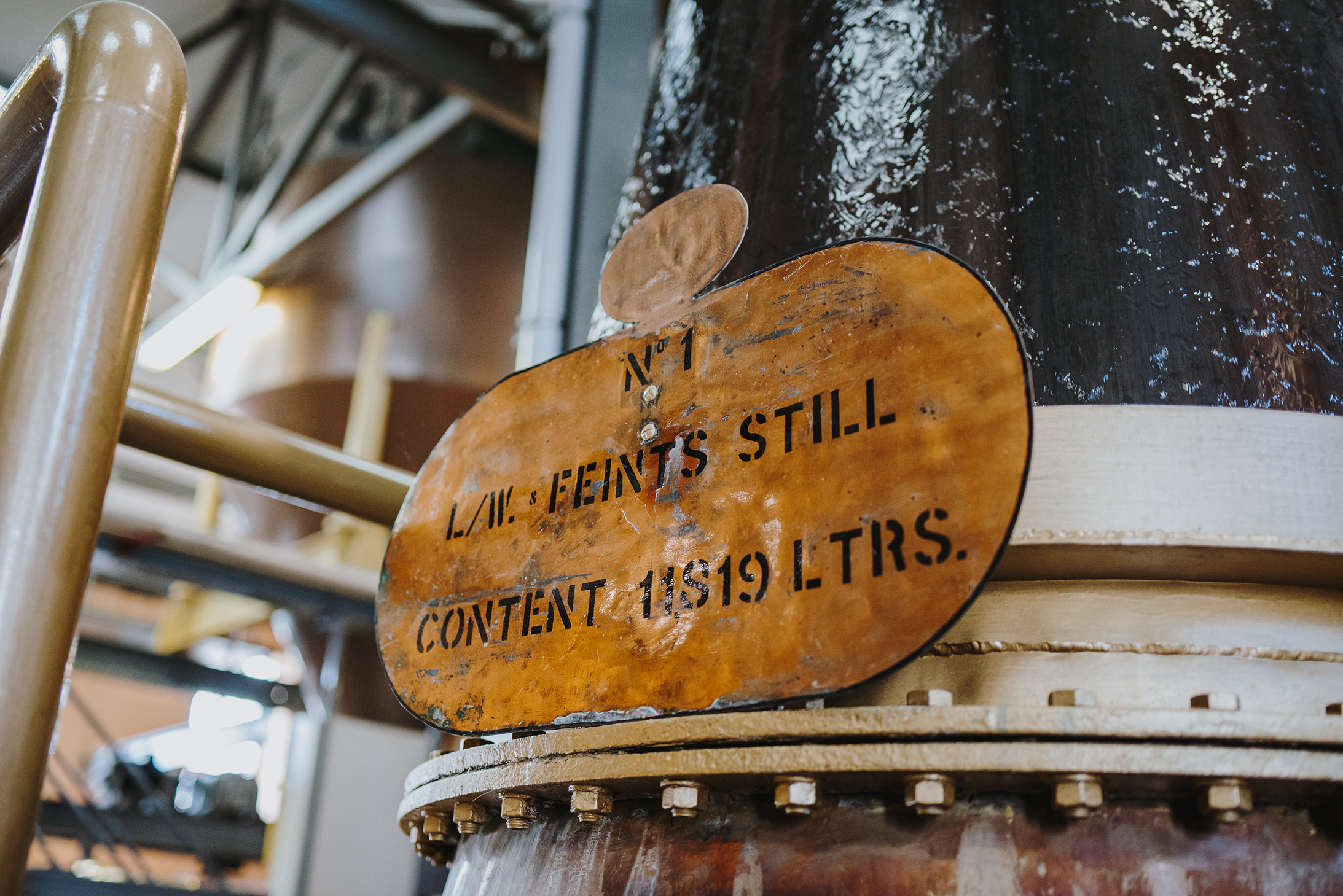 Following on from the 2019 rebrand, further releases have given more cause for encouragement, as they have shown an intent to release future Fettercairn expressions at a higher strength, free from chill-filtration and artificial colouring. The 22 Year Old release was the first such bottling, giving a straight up Bourbon cask presentation. It was closely followed by a limited edition 16 Year Old that featured chocolate malt in the mash bill, and was matured in a combination of bourbon, sherry and port casks. They are satisfying whiskies, and – although very different in style –  the characteristic tropical fruity notes remain discernible in both.

This brings us to the Warehouse 2 release, the beginning of a new range that will look to showcase the different dunnage warehouses at the distillery. There are 14 such warehouses at Fettercairn. If you’ve ever been on a tour there, you might be familiar with Warehouse 2, as it is the one that visitors are taken to explore. Therefore, it made sense that the first release would focus on this warehouse, and whisky maker Greg Glass has attempted to bring it to life by bringing together a broad range of casks matured within its four walls. 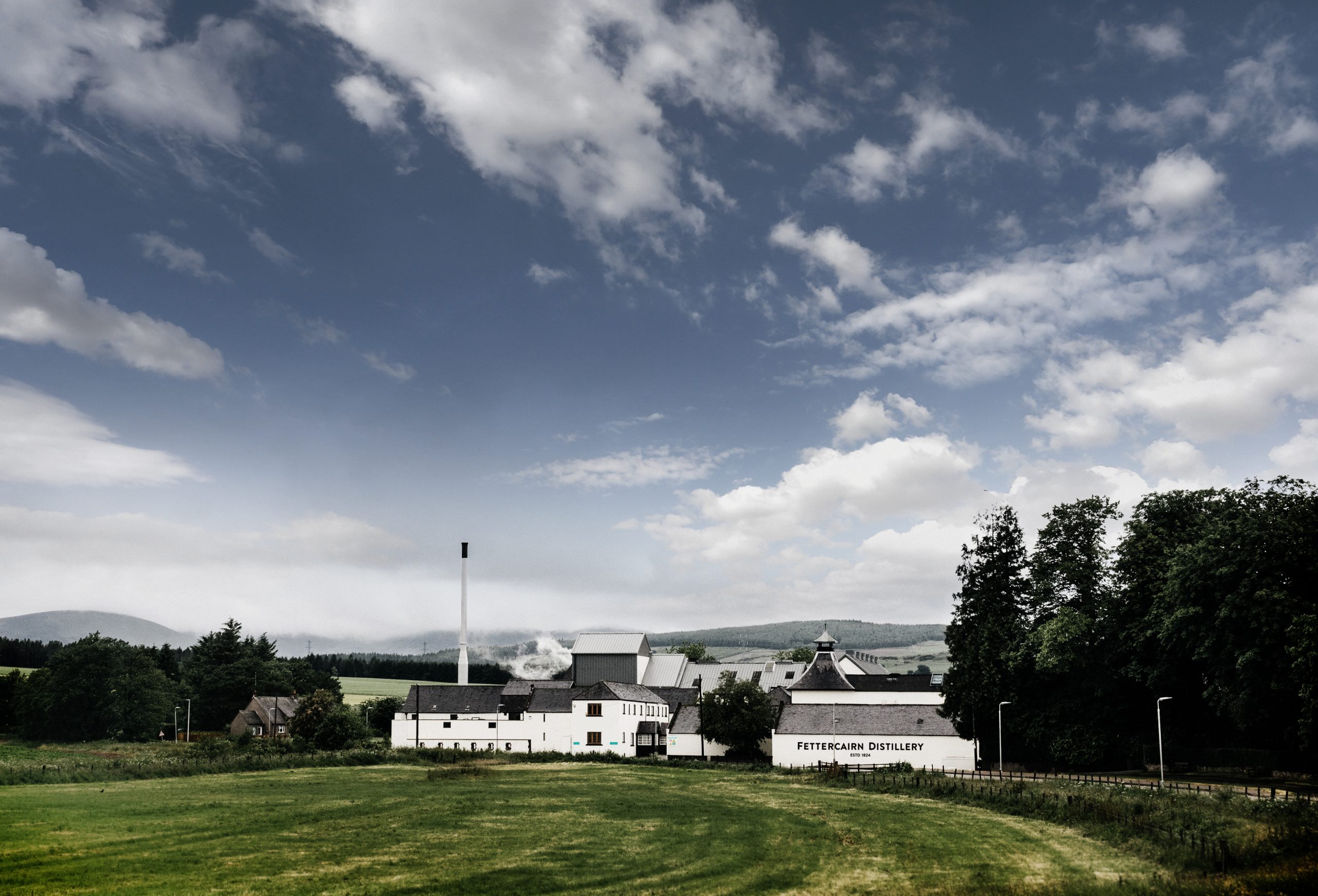 Again, there is no colouring or chill-filtration, and it’s bottled a creditable 49.7% ABV. We are given a lot of information about the component parts of this whisky. It contains five different cask types, all of which were laid down in 2010: 40% Port pipes, 35% ex-Bourbon barrels, 10% Tevasa Sherry barrels, 10% Vasyma Sherry butts, 5% Unseasoned Vasyma barrels.

Tevasa and Vasyma are cooperages in Jerez that supply sherry-seasoned casks to many distilleries, including the likes of Tamdhu and Macallan, as well as those within the Whyte and Mackay stable.

Reading the component casks list brought me excitement, but also some reservations. It seems to be a risk marrying together so many cask types and flavour profiles, and unseasoned Vasyma barrels (in other words, European Virgin Oak) hold the potential to overwhelm a spirit, especially a light and fruity one. Yet, utilised well, they will lift the whisky, giving it a boost of woody spice whilst dialling up the vanilla notes, preventing the port and sherry influence from the other casks being too dominant.

If it all comes together well, then it should be pretty flavourful and full of character. Whyte & Mackay have some good form in blending many cask types together, with Dalmore’s King Alexander III (containing 6 cask types) being one of my favourite drams… and something of a guilty pleasure, given the general opinion of Dalmore on this site in the past! However, if it isn’t well balanced, then the Warehouse 2 could join a less successful multi-cask Whyte & Mackay bottling, the Jura Seven Wood, in being much more of an acquired taste.

There’s only one way to find out what the end result is, and that is by tasting the whisky:

On the nose: At first not as fruity and sweet as you might expect. There’s some buttery notes; it reminds me of a bread and butter pudding, along with vanilla, coffee grounds and white chocolate. As it opens up the fruits come to the fore: red berries, apricot, peach, and banana foams.

In the mouth: This is multi-layered, with flavours coming and going throughout. On the one hand it’s very dessert like, with apples, poached pear, buttery pastry, and cream. There’s hints of cinnamon, dates and raisin, the vestiges of sherry and port, but only occasionally. Then there’s some reminders of summer with honey, heather and a floral greenness that I can only put down to the virgin oak. The finish leaves rich caramel, ginger, cocoa and a touch of clove. It will take a dash of water, which helps reveal more of the fruity notes, but it is not essential, and comes at the expense of losing some of the oiliness.

This is a pretty complex whisky. There is a lot going on but, when given time to open up, it holds together nicely. The 5% virgin oak cask component is disproportionately present, whilst the sherry casks are very much in the background, almost hidden. Fettercairn’s tropical character comes through more clearly on the nose than does on the palate. It is pretty well balanced, and it has a very satisfying mouthfeel. Whilst it makes sense for the first Warehouse 2 batch to be a greatest hits composition, to introduce the series and the warehouse, I would hope that further releases might focus in on particular cask types, showing how they each influence the Fettercairn spirit. Overall, it’s a clear example of how much Fettercairn have upped their game and will raise expectations further for future releases.

In a whisky landscape where we are often left disappointed by rebrands and relaunches, as they can seem cynically designed to increase profits through greater efficiency, it is a relief when we come across a much more positive transformation. As such, the team at Fettercairn is due a lot of credit. This change of direction, with a more experimental approach, means the potential of this fruity and light spirit is being unlocked and explored in creative and interesting ways. Up to now this had only been done by independent bottlers, so it’s good to see the distillery itself is finally catching up.

Previously, my main complaint regarding the rebranded Fettercairn has been high pricing, especially with the 22 Year Old (£175 – £220) and the 28 Year Old (£460-£550). I tend to feel that such premiumisation should be earned rather than claimed, but there’s no denying that the whisky is of a high quality. In contrast, the Warehouse 2 bottling at £55 seems very reasonably priced indeed. However, in a week where the Warehouse 2 is selling for more than the 22 Year Old’s RRP at auction, Whyte and Mackay could fairly argue that if anyone is to profit from their whisky, then it should be themselves and their chosen retail partners. It’s inevitable that prices will continue to rise whilst the secondary market remains so buoyant, so I’ll be pleasantly surprised if ‘Batch 002’ is priced as favourably. We’ll have to wait until the release of ‘Batch 002’ in August to find out but, as long as Fettercairn continues on its current positive trajectory, then the whisky itself should be an enjoyable treat… if you actually manage to get your hands on it.

Many thanks to Andrew Lennie, Communications Manager at Whyte and Mackay, for his time in providing some detailed background on the history at Fettercairn, and for the images that accompany this article (apart from the Warehouse 2 bottle image, which belongs to the author).

There are changes afoot at Cadenhead which is Scotland’s oldest independent bottler and a reliable source of quality. One of the changes in 2013 was..