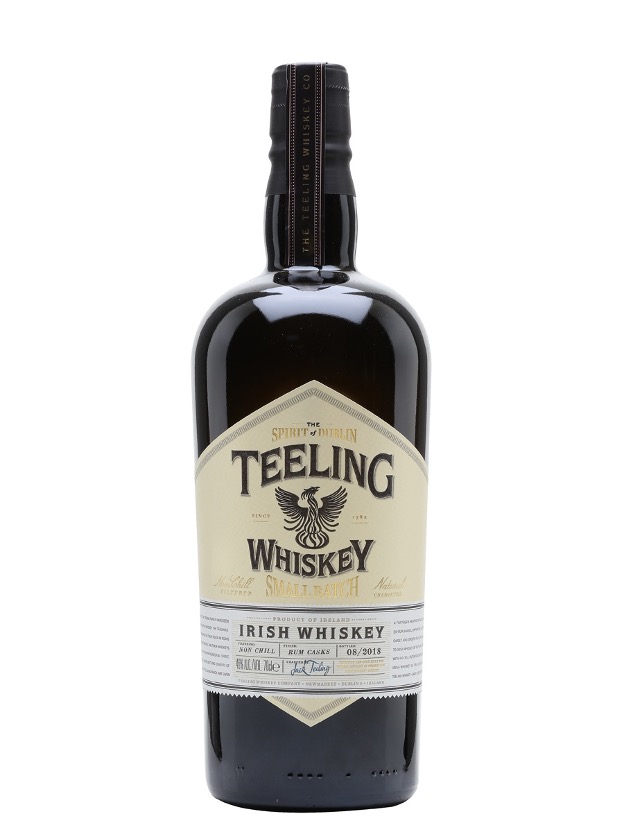 The most recent one was with Teeling, hosted by Robert Caldwell. We had to buy a sample set consisting of 30ml sample bottles of the Teeling Small Batch, Single Grain, Single Malt and Single Pot Still to join the event.

First in the tasting was the Small Batch. It’s said to be aged in ex-bourbon casks for up to 6 years, and then spends an additional 9 to 12 months in Central American rum casks. A blended whisky, it is three parts grain whisky and one single malt.

On the nose: Aggressive heat which conceals raisins on the get go. There are muddled light fruit and sweet notes which are hard to pick apart with the heat getting in the way. I get round scents of lime peel, orange peel, melons, peaches, honey and mandarin oranges. The heat subsided at the end and then gave off faint scents of coffee, toffee and star fruit.

In the mouth: Not as hot as on the nose. Light confectionery notes like mocha, toffee and honey are more upfront here, but they’re taken over by slightly more intense tastes of fruits like star fruit, lime peel, mandarin oranges, canned peaches, grapes and grape skin. At the end are flashes of KitKat raisin chocolate and a raisin ice cream.

This needs some time to open up. At the time of the virtual tasting, the flavors were quite muddled. The heat getting in the way didn’t help, either. Even after opening up, the flavors were still incoherent. As expected of Central American rum, which are mainly column distilled and made in efficient ways, it doesn’t lend many flavors. This is a forgettable and inoffensive whisky that beginners will enjoy.

The second thing we tasted was the Teeling Single Grain. Its mash bill is 95% corn and 5% malted barley. If you’re not aware, mash bills for grain whisky, bourbon and rye traditionally have a small amount of malted barley to start fermentation.

Teeling’s grain whisky comes from the Great Northern Distillery, owned by John Teeling (Thanks, Phil). It was mentioned in the tasting that John owns shares in the Teeling distillery as well. The grain whisky are aged in ex-Cabernet Sauvignon barrels from California; these casks aren’t re-toasted or re-charred. On a side note, it was nice of them to say that they receive the wine casks with still 6L of wine in it. Ex-wine casks often have some wine left in them during transit to prevent the cask from going bad. 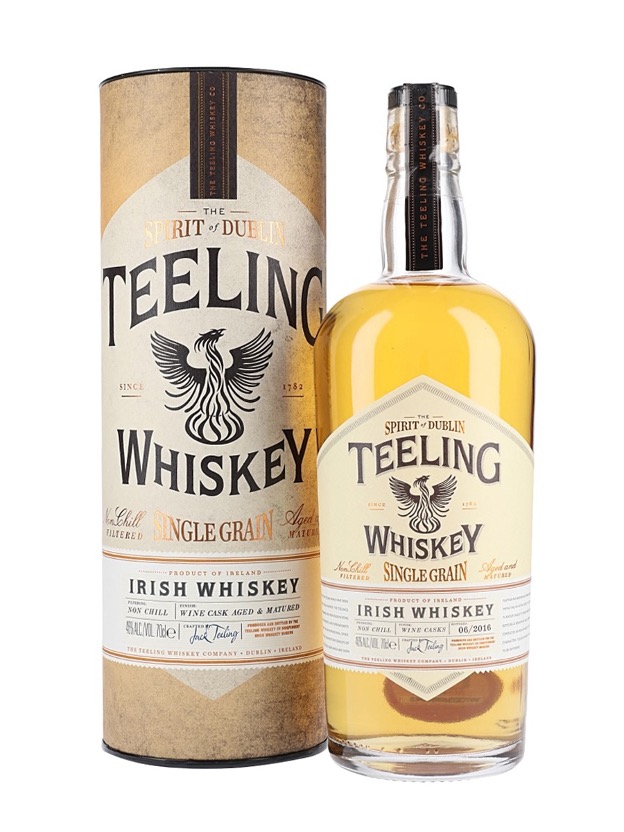 On the nose: There’s a light heat with a rough and grainy, yet welcome, texture. It gives off a lot of typical light and sweet scents. Initially, there’s a lasting aroma of sweet corn mixed with caramel and nuts. At the end is something like wood shavings brushed with honey, pineapples and crushed nuts, and then roasted.

In the mouth: Very different from the nose. The grainy texture is not as evident, but notes in this are more expressive. From the get go, I get medium and lasting tastes of Taiwanese pineapple cakes, coconut cream, honey and toffee. A light taste of blended sweet corn with cream comes and goes.

A two-faced whisky. The nose is not really complex, but at least it has character that slaps you awake. It leaves an impression, and sipping this is very enjoyable. However, like the nose, it lacks complexity. This is more like enjoying a long and predictable slide rather than something with turns and bumps. A session whisky would be an apt description of this. It doesn’t need your full attention, but it is still noticeable enough to be enjoyed while focusing on company.

From a cocktail perspective, I think this would go very well in a twist of a Piña Colada due to flavors from the different ex-wine casks as well as the lasting Taiwanese pineapple cakes and coconut cream; they would go well with the cocktail, plus I once had a twist on a Piña Colada with Fino sherry in it. That prior experience also informs my suggestion.

Third in the line-up is Teeling’s Single Malt. Two types of yeast are used here. One is a white wine yeast from South Africa, and the other is a distiller’s yeast. The fermentation results in a 10% ABV wash. The whisky are aged separately for 9 to 23 years in ex-cabernet sauvignon, ex-Madeira, ex-white Burgundy, ex-port or ex-sherry casks. They are blended afterwards, which really varies batches. (I’m pretty sure the distillates for the single malt are still from Cooley, as the Teeling distillery was only established in 2015.) 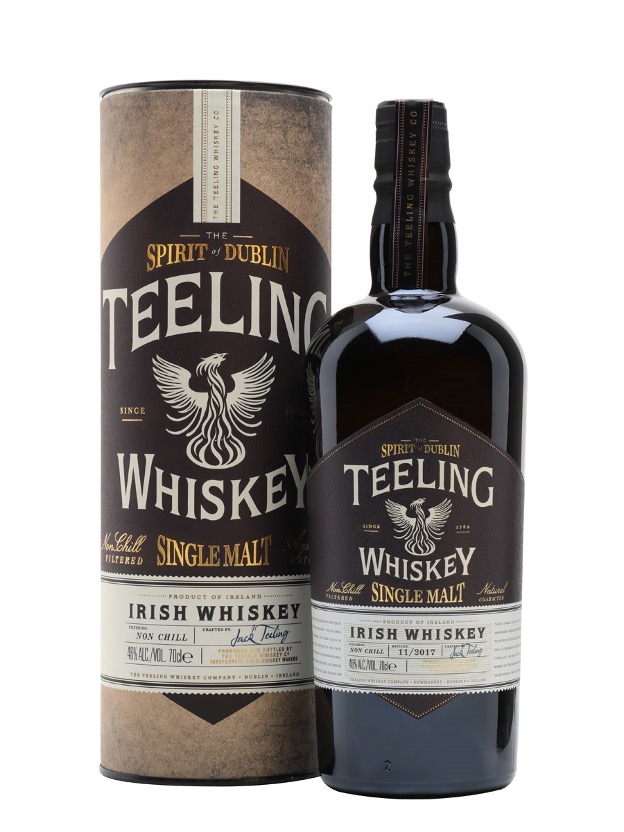 On the nose: Markedly different from the Small Batch and Single Grain. There are more fruity, sour aromas here, which come from the various ex-wine casks. Like the Small Batch, they’re muddled and hard to pick apart. I get a lightly intense assortment of sour plums, gooseberries, white grapes, white chocolate, mocha, raisins, coconut oil, bergamot, leather and wood shavings.

In the mouth: Just like on the nose, this is a wild and incoherent mix of fruit notes arising from various ex-wine cask influences. There are light tastes of red bananas, gooseberries, mocha, chocolate raisins, ripe plums, bergamot, basil, flower petals, apples, Tinta Negra Madeira, cascara tea and chamomile tea. A light flash of sulfur comes and goes.

Imagine a fruit basket where all its contents are shrunken down and the flavors all cut short. Most of the fruit flavors only expressed the first-half of what one would taste in a fruit, and then it quickly switched to another kind of flavor. I find this an interesting whisky, but the flavors aren’t that cohesive. They’re all over the place.

I’ve read that the ABV of washes meant to be distilled for whisky affects the heat and flavors the whisky expresses. Flavorful Springbank’s wash ends at 6%. Teeling Single Malt ends at 10%. This ABV is said to be similar to high-output, modern Scotch single malt distilleries like Glenlivet. The resulting distillate is said to be hotter than most, leading me to wonder if a lower wash would result in a more cohesive blending of flavors during aging.

Fourth and last of the night was Teeling Single Pot Still. These are fermented for 5 to 7 days in Oregon pine mash tuns. The mashbill is 50% malted and 50% unmalted barley, uses the same yeast as the single malt, and is triple distilled. The whisky is separately aged in ex-bourbon or new American oak or ex-sherry casks. Then they are blended at a recipe of 50% ex-bourbon, 25% new American oak and 25% ex-sherry casks.

On the nose: Bold and enveloping aromas of apples, barley and plums. After those are light and quickly fading scents of Thompson grapes, star apples, honey, prunes, dried apricots, cloves and steamed cabbages.

In the mouth: Similar to the nose. There are bold and enveloping tastes of apples, barley and plums. Honey, star apples and atis are bolder here, but they end abruptly and give way to cloves, dried apricots and prunes. At the end are flashes of dry Chardonnay, more star apples, atis and guava.

Conclusions: This is best among the lineup. While it isn’t as complex as the Teeling single malt, the flavors it gives off are fuller. It’s mostly fruity, which I think is the result and target of the triple distillation. (Consumers might think that triple distillation is meant to make a spirit smooth, but it’s more for concentrating targeted flavors).

Despite being the best among the four, I wouldn’t recommend this for beginners. The initial flavors might be seen as too bold, while the more subtle ones are hard to notice and coax out. It is shyer compared to the rest, but letting it breathe is rewarding.

Photos courtesy of The Whisky Exchange.