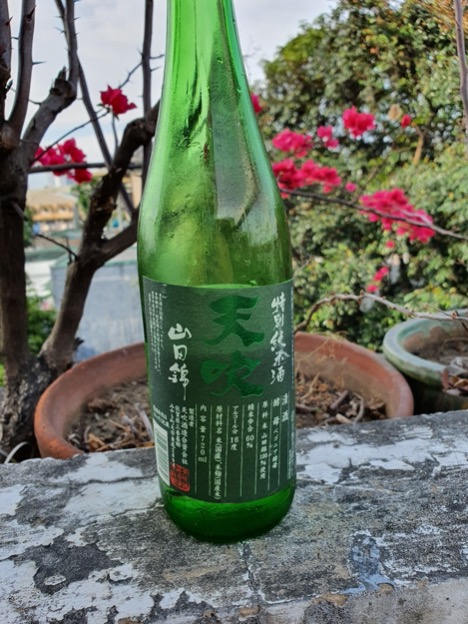 It’s April (as of this writing). The unforgiving Philippine summer heat is back.

A long, long time ago, when things were normal, I used to take advantage of the long weekend Easter would give us. I’d travel and try to escape the scorching heat. The last time I was allowed to travel during Easter, I took a trip to the Kansai region of Japan. Because that trip was so fruitful, Easter now makes me think of Japan.

A day trip to Nara for the deer park there, as well as a well-known cocktail bar called Lamp Bar, let me accidentally stumble upon a sake brewery called Harushika. Their products got me hooked unexpectedly on nihonshu, AKA sake. The sake that got me hooked was a seasonal one fermented with sakura yeast. It was, as expected, very floral and delicious. The other one was a sparkling sake whose flavors remind me of Sprite.

Sake, which is a fermented rice-based alcoholic beverage, normally goes unaged. Because it usually doesn’t spend time in wood, the resulting liquid is usually clear.* Whiskey drinkers often think color is an indicator of more flavor, but clear beverages can have a lot, too, thanks to the quality of raw materials… in this case, koji-kin and yeast; the star of this piece is the latter.

Yeast may be better known as an organism that converts sugar into alcohol. It and fermentation may only be a topic big whisky brands tend to mention in fleeting during their “master classes.” They like to focus on aging and casks, which is to their advantage. They have way more aging stock and access to casks compared to the smaller producers who can’t age as much as them. This means they can rely on the aging process to hide the faults in their steps towards efficiency—but yeast does way more than consumers are led to believe. To simplify, it’s all about how certain acids and compounds are produced by the yeast. For example, we think the rye in rye whisky gives us the spicy flavors we know and love, while it’s really the high amounts of ferulic acid in rye that gives off the spicy flavors.

The sake I’m reviewing today is Amabuki Shuzo’s Tyoukarakuchi Tokubetsu Junmai. Shuzo is a Japanese word that refers to an alcohol producing company. Tokubetsu means special, and Junmai stands for a sake that’s only made with fermented rice.

This sake is made from Yamada Nishiki rice. It’s the same sakamai (sake rice) that’s used by the famous brand Dassai. The rice is milled to 60% and fermented with begonia flower yeast. Begonia is a flower I’ve only heard of now, so I don’t know what to expect. How often do we hear of and get to try alcohol fermented with flower yeast, though?

Amabuki Shuzo is a 300-year-old brewery located to the south of Fukuoka city and to the east of Saga. Unlike a lot of sake breweries, they only use rice grown locally, in Saga. A lot of breweries these days source from other prefectures of Japan. They also have a whole range of sake that uses 11 different flower yeasts.

*There are some cloudy sake (Nigori) but they’re just basically unfiltered. I‘ve written about traditional sake that has spent time in cedar wood containers. Check it out here. There are also some slightly amber colored sake but those have been rested in stainless steel tanks. The color is a result of the interaction between the alcohol and oxygen.

On the nose: A light and yet enveloping aroma of banana peels and banana-flavored candy. After those are even lighter scents of toasted rice, pine nuts, almonds and roasted pineapples. At the very end is a really light and quick note of mashed pears.

In the mouth: A dry sake. Sadly, the banana notes aren’t present here, but the toasted rice, almonds and mashed pears are. There is a very light taste of roasted pineapples and jackfruit at the end.

It’s quite disappointing that this isn’t as floral as I expected it would be. But while sake relies on yeast, it’s also heavily reliant on koji-kin, which could get in the way of the full floral notes the yeast can give off. I would be very interested to get a hold of the whole range of Amabuki’s flower yeast sake just to compare how the different yeasts affect their sake.