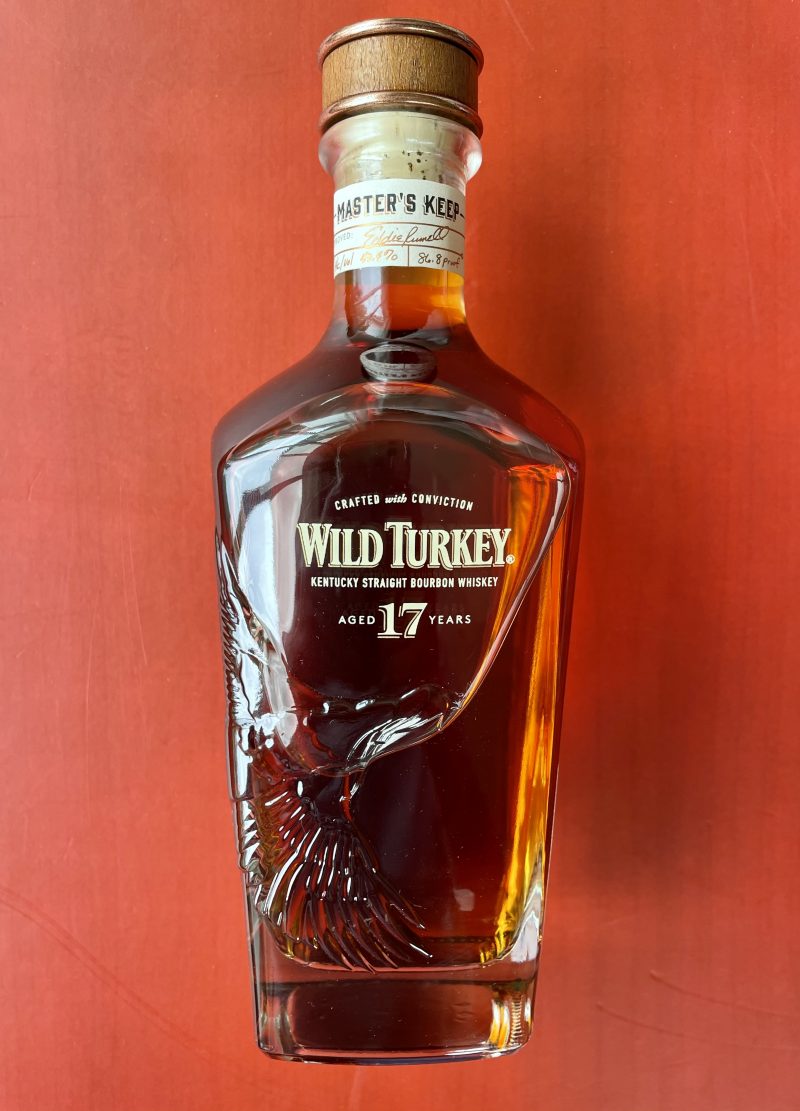 What’s your most desired whiskey right at the moment?

Allow me to clarify further: I’m not talking about a once-in-a-lifetime dusty bottle. I’m referring to a whiskey that you’d have some likelihood of locating on a shop’s shelf for retail price. What is the bottle that your eyes scan for whenever you enter a grocery or liquor store, that you feel like you have a reasonable chance of obtaining?

My current fixation is finding another bottle of Wild Turkey Master’s Keep Bottled-in-Bond. I was fortunate to find one close to SRP when it was first released, but I depleted that bottle by enjoying it myself and by sharing it with pals who were not as lucky as I was. I have since been searching in vain for another that has not has its price jacked up by an opportunistic shopkeeper. In terms of coming releases, I’ll be keeping my eyes peeled for the recently announced Russell’s Reserve 13 Year Old.

Amusingly – given my reputation as the scourge of the house that Russell built – I’m more frequently found on a Wild Turkey chase than in searching for any other brand of bourbon. Though the mainstay expressions remain as accessible as ever (praise be to Jesus and Jimmy for that), the distillery seems to have shaken off the stigma it bore for the previously skeptical portion of the whiskey drinking population. This is reflected in the brand’s Limited Editions being more… well… limited in their availability of late.

This is perhaps just a reflection of trends in bourbon following trends in assets more generally, where carrying whiff of collectability or being credibly perceived as a store of value has driven up the demand for (and price of) all manner of stuff. For some segment of the consuming population, bourbon has joined real estate, “stonks,” baseball cards, cryptocurrency, non-fungible tokens, and gasoline as a good place to park a few bucks, with the promise of future profitable resale.

Apart from an early foray into collecting Japanese whisky (curtailed due to practical and financial constraints), I have resisted the urge to view whisky in terms of a collection. I have a few dozen unopened bottles, but these are earmarked for eventual consumption. I’m certainly not incorporating anticipated auction proceeds into any of my retirement planning.

I consider myself lucky that, early on, I recognized that the true purpose of whiskey was to facilitate interactions. I was taught this by the exceedingly generous bourbon community, in which complete strangers will send me – an absolute nobody – samples of rare and expensive bottles from days gone by, free of charge. I have tried to pay this forward to the best of my limited abilities, but the favors bestowed on me will always far exceed what I’ve been able to put back out there.

Be celebrating these magnanimous souls, I hope to encourage similar behavior on the parts of others. I understand that it’s hard to break the seal and pull the cork on a bottle of whiskey that you could conceivably resell for hefty profit. However, by not opening and sharing a bottle of bourbon, you are stealing from yourself. You’re trading for something of finite material value by forsaking several infinite, priceless things: good karma, experiences, memories, and friendships.

Speaking of friendships: I have many wonderful ones focused on a shared love of whiskey, but few are as important to me as my relationship with David Jennings a.k.a. Rare Bird 101. From my first foray into Wild Turkey, David has been a guide, a source of information, a counselor full of good advice, and a steadfast supporter and ally. It’s fair to say that I wouldn’t be the whiskey writer I am without his influence.

As a consequence, I was overjoyed when I learned that he’d launched a Kickstarter campaign to fund the publication of his second book. Titled “Wild Turkey Musings,” it will commemorate the fifth anniversary of David’s blog by collecting his favorite blog posts into a published compendium. Full disclosure: I have already contributed as a supporter and hope that you all will see fit to do the same.

David asked me to review his manuscript, and I sent him some light edits and a suggestion or two. In keeping with the generous spirit of the bourbon community, he repaid this minor labor with a bottle of an expression I had been keen to try: the 17-year-old inaugural entry in the Master’s Keep series.

An interesting side note: this release was the first from Wild Turkey to be credited solely to Eddie Russell; he had prior been sharing top billing with his father Jimmy, Wild Turkey’s Master Distiller emeritus. The date this article is published (June 5, 2021) is as fitting a day as any to be reviewing this expression, as it is Eddie Russell’s 40th anniversary with the distillery. I’m sure Wild Turkey fans as well as bourbon lovers more generally will be joining me in wishing him another 40 years at the helm.

Back to the whiskey itself: originally released in 2015, the barrels comprising this expression were moved thrice in their lives, according to “American Spirit.” Following an initial maturation in Wild Turkey’s conventional Tyrone rickhouses, a stay in the cool stone rickhouses of the former Old Taylor (now Castle & Key) Distillery dropped the proof on these barrels down to 88.4 (44.2% ABV), with the eventual bottling strength of 86.8 proof (43.4% ABV) being toward the lower end of what is released by Wild Turkey (barrel entry proof was the old standard: 107).

I was recently converted to lower-proof Turkey by a sip of the Russell’s Reserve 2003, which I felt gained in flavor what it gave up in texture. Based on the excellence of that example, I’ll be hoping for a similar experience with this bottle. Certainly, a significantly lower price will be a tailwind to scoring: this was initially released at $150, which will be the price I use for calibration. While cheaper than other limited editions (from Wild Turkey and others), this is still quite an ask for bourbon. As noted above, this bottle was the generous gift of David (you can read his thoughts on it here and here).

On the nose: Initially, there is a lavish cherry scent here that is accented by a stony fluorine nuance. An herbal bouquet of tarragon and thyme meets with a bittersweet aroma of dark chocolate. I get a maritime mineral note in the manner of Chablis, with echoes of crushed seashells. More time in the glass allows this to express some “darker” aromas of leather and tobacco, as well as a surprising note of underripe nectarine. Over time, a meaty nuttiness emerges, in the manner of unsalted cashew. I also start to pick up some whiffs of fragrant wood, like eucalyptus and sandalwood.

In the mouth: This is understated to start, but patience allows the flavors to reveal themselves gradually. There’s a gently fruity sweetness initially, which transitions to a very subtle floral note as this moves toward the middle of the tongue. At the top of the tongue, this once again tacks toward the mineral flavors suggested by the nose. A hint of ash marks the move toward the finish, where the whiskey broadens out around the back of the mouth with a blooming, woody heat. This lingers for a while, with a whispered echo of that first cherry scent, as well as a drying, stony texture.

Stepping back for a moment, I think it’s worth reconsidering what this is, and what purpose it serves. This is whiskey that dropped in proof (due to storage in unconventional rickhouses) over a very long maturation. It’s not at all indicative of what the majority of Wild Turkey will (or should) taste like. With that said, there are some great aromas and flavors here, though they take a lot of time and attention to coax out.

This has much in common with the Russell’s Reserve 2003, but with less diversity and flavor development. It’s substantially cheaper than that expression, though – as noted above – it’s high priced in the grand spectrum of bourbon. Netting all that out and applying the imprecise art of judgment, I feel inclined to dock this a point relative to my score for that expression, resulting in…

For me, a score is less a precise numerical assessment of a whiskey’s specific quality, and more a directional steer on whether or not I’d purchase another bottle. So, what is the implication of a score precisely in the middle of the range, in terms of my proclivity to acquire this again? If I saw a bottle on the shelf for $150, I’d lean toward “yes,” justifying this due to the fact that this is Wild Turkey from the old barrel-entry proof, carrying a high age statement, and that the result of all that is some distinctive character that is not replicable by buying a cheaper alternative off the shelf.

Returning to my original premise: I’ll add Master’s Keep 17 Years Old to my list of desired whiskeys, alongside its siblings Revival and Bottled-in-Bond (though not Decades or Cornerstone). For those of you considering a purchase of this expression, hopefully the above has calibrated your expectations appropriately. The choice is yours but, if you do decide to spring for a bottle: make sure you open it, share it, and drink a toast to Eddie Russell’s health. Cheers!