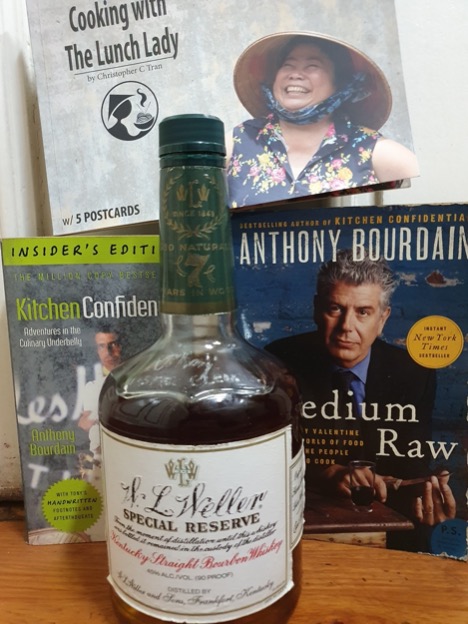 Another year has passed. Another June 8 has come. Another reminder that we lost Anthony Bourdain.

Tony may be best remembered as a TV food & travel celebrity, but I think that many forget (or don’t know) that it was his first book, Kitchen Confidential, that catapulted him to fame. He started with A Cook’s Tour while still working at the now-closed Les Halles. That show only lasted from 2002 to 2003, due to more of Tony being unhappy with the Food Network than the show not doing well enough, though.

Shortly after, he starred in No Reservations, the short-lived Lay Over, and lastly, Parts Unknown. Dumb-as-rocks teenage me watching his episodes in the early 2000s only focused on where he went, the food he ate, what he drank and the occasional dick jokes. You know, the eye-catching stuff. Only after rewatching episodes after more than a decade later did I start to see more context.

Not being able to go out for leisure has given me time to go through No Reservations and Parts Unknown again. Seeing his progress over 13 years and re-reading his books made me realize a few things. One is that there is an ironic aspect to growing old. Most of us may start losing the good eyesight youth granted us—although, thankfully, there’s LASIK—but in exchange, we start seeing other aspects more clearly. We slowly develop the ability to see through someone or past something’s surface to get a better glimpse of its inner depths.

We all know of Bourdain’s love and advocacy for street food. Before him, food shows mostly consisted of celebrity chefs cooking live in studios with an audience. Street food—or as Tony liked to call some, food fast—had a bad rep. The downsides of fast food weren’t as highlighted yet, and we were told street food was either unhealthy or not safe to eat, despite being tasty. The stigma was, you had to eat at fancy places to eat well.

Over time, Tony shattered that. He didn’t care about the norms at the time, and he saw the value in street food from places like Vietnam, Thailand and Singapore. Slowly, through him, we realized that these “dirty” street food vendors wouldn’t stay in business if their product was unsafe. Without marketing, their customers will most likely be from the nearby areas, so it is in their best interest to make their dishes the best they can to keep their customers coming. Due to these vendors lacking space, they can only sell a few types of dishes. This means they’re (ideally and most likely) specialists in whatever they make.

In fact, it wasn’t just street food. He continually showed us that simple food—everyday dishes done well—can equal the dishes of really high-end establishments. Well-made everyday food not only nourishes the body, but also the soul. No need to break the bank. No need to make a reservation a few months ahead to have a memorable meal. In short, I think he showed us the food version of not judging a book by its cover, and also—more importantly—to stick to your convictions. Change is the only constant thing in the world, and you could be a catalyst to one of the changes.

The other things I realized are that we all go through life at our own paces, and you have to be prepared to get lucky. These are points I find hard to separate, so I’ll just mix them together. We shouldn’t compare our milestones and achievements to others’—or, when we reach them, to what society dictates.

Tony is a great example. By society’s norms, he only found success in his forties, which was when his book came out. He became a father for the first time later that decade. From time to time, he reminded his viewers that before his book, he was heavily in debt. Being an old chef with no other prospects made his future look less-than-promising.

In addition, when the doors of success did open up to him, he didn’t settle for mediocrity. Tony said he had been messing up his whole life, which is why he wanted to be more careful with what he did after that point. Plenty of gigs were offered, but he declined a lot of them. He only wanted to do things he was interested in. Despite being given free reign, he kept himself in check. To him, certainty was the enemy; he wanted to do things well, yet unconventionally.

Making mistakes was something he also didn’t consider as a failure—because, at the end of the day, he thought he could just try again to improve on what went wrong. These resulted in his shows being nominated and winning Oscars. I guess that a lifetime of failure pushed him to a point where he was sure of what he wanted and didn’t want. Tony got his chance. He took it, but he didn’t take it for granted.

Part of knowing what he wanted, I think, meant that he was extremely comfortable with himself. Others have labeled him as obnoxious and arrogant, but to me, he just seemed candid. He had a way of saying what he wanted that got the point across but also came out funny. It’s special how he found ways to do things he wanted without being harmful to others, to a degree. “To a degree” because he’d play pranks on his team, but in Parts Unknown Myanmar and Iran episodes, he successfully kept in mind the censorship there. He could have not cared and gotten more of the content he wanted, but it would have been at the cost of his guests, so he didn’t. In my opinion, that’s the way to live.

Because one of my strongest memories of Tony is him drinking a Pappy in Seattle, I’ll be reviewing something similar to the Weller 12 that I reviewed for my ode to Tony last year. This one is a Weller Special Reserve 7 year from the nineties. There is almost nothing about this bottling online, but I have some information. Drew Mayville visited Manila in about 2017 or 2018 as part of his Asia tour. When I asked him to sign it and tell me what he knew about it, he said the bottles were bottled before he started working for Sazerac, which was in 2004.

Upon inspecting the bottle further, the lower right of the front label says “COPRY 1941 S.W.D. INC.” S.W.D. most likely stands for Stitzel Weller Distillery. I bought the bottles in Japan some years ago for about 8000 yen each. On the back is a sticker that says 2-14-3. This most likely means this bottle arrived at the store in Japan on February 14, 2003. The front label says it was bottled in Frankfurt, which means this was bottled by Sazerac; S.W.D. is in Louisville. Using the info from the Japanese sticker, this batch of Weller was most likely bottled in late 2002, and it probably took a few months for them to arrive in Japan. S.W.D. closed in 1995, so this could be one of the last batches they distilled.

On the nose: This has a long, mildly sweet and oaky aroma with a sweeter rise at the end. There are medium aromas of cinnamon, muscovado syrup, vanilla, leather and wood shavings. At some point in the middle, the heat rises, along with a burst of sweet corn. At the end are slightly more intense, yet short-lasting notes of rhubarb, honey, toffee, cherries and banana tart.

In the mouth: Unlike the well-structured nose, this is less organized. The first few moments in the mouth feel like water. Light ethanol heat quickly follows. It gives way to jumbled-up tastes of honey, vanilla, cinnamon, cherry jam, orange caramel, orange peel oil and orange gummy bears. At the end are these all over again, but in between are bursts of coconut sugar syrup and toffee. At the real back end is a slightly unpleasant overly-oaky note.

This is my first Weller Special Reserve in a long time. This has far fewer toffee and nutty notes compared to the OWA 107s to which I am accustomed. The orange notes aren’t so expressive on the nose, which is surprising: orange is one of the earliest bourbon aromas I usually pick out. The nose is very well-structured, as the aromas wait to take turns to express themselves. In the mouth, the lack of ABV is felt, with a consistency akin to water. The flavors here were a mess, yet still tasty.

This is a far cry from the 1960s Very Very Old Fitz Bourbons I’ve tried. However, I’m still glad to own a few bottles of wheated Stitzel Weller Bourbons from its ending days.