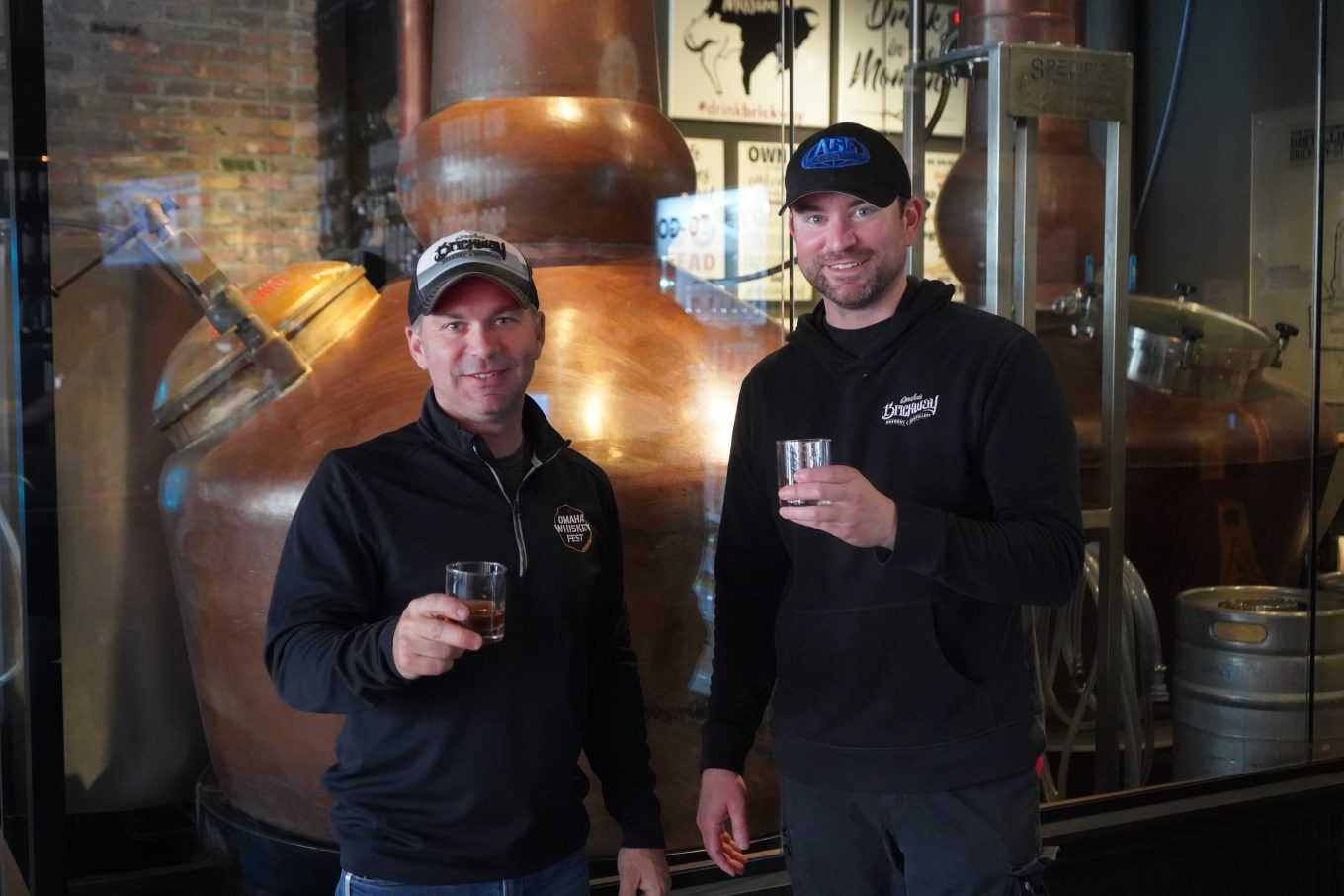 When I first read about Brickway Distillery in Omaha, I was annoyed. But it was love at first sip.

I am from Omaha, and like most people in whiskey, I have a sense of entitlement to all things whiskey. A legitimate sense of entitlement? Lord, no. But the “craft” distillery boom made me cynical. My meta-thought was, “Even Omaha thinks it can make whiskey now? Psh.” I’m a brat, what can I say? I researched the guys who founded it, hadn’t heard of them, and I dismissed them with prejudice. Because in my opinion, most new whiskey is unremarkable.

I keep up with the whiskey headlines and saw that Brickway was one of the distilleries that made hand sanitizer for the public during the beginning of the pandemic. They made national headlines and were the darlings of the local media. Enough people sent me articles about the distillery that my curiosity was piqued. I was in Omaha at the beginning of May and decided to pay them a visit.

As far as the whiskey, I approached it with a narrative that I already knew what it would taste like. My palette is expensive and my preferences are wild. I am, in short, a little pretentious about it. Brickway’s website, while cleverly written, needs some updating. “Cellar” is misspelled, the contact email listed was out of date, and there were a couple faulty links. Don’t get me wrong, a dusty website is endearing. It indicates the distillery is focused on whiskey, not marketing, instead of the other way around, which is too often the case.

I forced my 68-years-old-and-still-foxy aunt Ivy to visit the distillery with me, utilizing emotional blackmail. On our way in, we ran into my friend Chris. A coincidence? Not really. It’s Omaha. The bar itself has a cozy feel, the stills are on display front of house, their bottles fill the bar shelves. The Brickway slogan is “Celebrate, Commiserate, Commemorate.” Indeed! They make a lot of different products, but I was just here for the whiskey. We three ordered two of everything and shared. We had a blast. We had profound conversations and solved the world’s problems.

My flight started with their single malt, and lo and behold, I liked it. It was different. It was original. I was genuinely surprised because I am a grouch. There was a familiar taste that I couldn’t quite pick out, which is my favorite thing. I covered my ears and squeezed my eyes shut. I look nuts when I do that but I don’t care–the idea is if I take a couple of senses away I can smell and taste better. There was something I knew that I knew, but it was faint so I couldn’t make it out, on the tip of my memory for a couple minutes driving me crazy, and then it hit me: OREGANO. A brand new note I’ve never tasted! Oregano is very familiar, yet subtle and singular, like the highly awarded Brickway Single Malt!

I made my way down the flight, “star stepping” as I like to call it. The rye was pretty classic, both soapy and minty. Their double barrel bourbon I would call standard, with a surprise. The Mostly Honest bourbon is a straight bourbon distilled in Indiana from a mash of corn, rye, and barley. The Mostly Honest bourbon has an oddly silken palate for its nose, and then a very astringent finish for such a mild palate! The thing I liked best about it was its name. ‘’Mostly Honest’’ Bourbon is a very cute name for the spirit. It’s supposed to “keep you honest.” Ha! At this point any bourbon at 43% ABV tastes like apple juice to me. The Sherry Cask was the knockout. I have a massive crush on it. It’s truly a bombshell, skip ahead for the notes. It has a rare freshness that I can only compare to Springbank, the holiest of compliments.

The Brickway founder is the modest Zac Treimert. He opened the distillery in 2013 after cutting his teeth brewing for their neighboring brewery, The Upstream. He’s from Minnesota, has a microbiology degree, and started working at an agriculture company in Omaha right out of college. When I asked him what made him interested in whiskey, he gave me a casually vulnerable answer. When Zac was a young adult his father passed away. He realized life is too short, and you have to do what you love. He had been home brewing, and he decided to make the career jump-ship to professional brewing. He earned his masters in brewing and distilling at Heriot-Watt University in Edinburgh, Scotland.

Now it seems like Zac has discovered there is nothing he can’t do. Brickway makes roughly 25 beers, a jalapeno pineapple pilsner being their acclaimed standout. Their head brewer is Mitchell Elmblad, pictured with Treimert above. Brickway has it all–rum, vodka, gin, a cinnamon whiskey. He made Nebraska’s first sherry casked whisky and Nebraska’s first hard seltzer. (I admit I love the occasional hard seltzer). Zac is directly responsible for all distilleries in Nebraska. At current count there are six. Treimert himself wrote the legislation allowing craft distilling in Nebraska. He called state senators, learned the language, and it was passed in 2007. At this point I asked him his birthday… just as I suspected: an organized and ambitious Virgo. 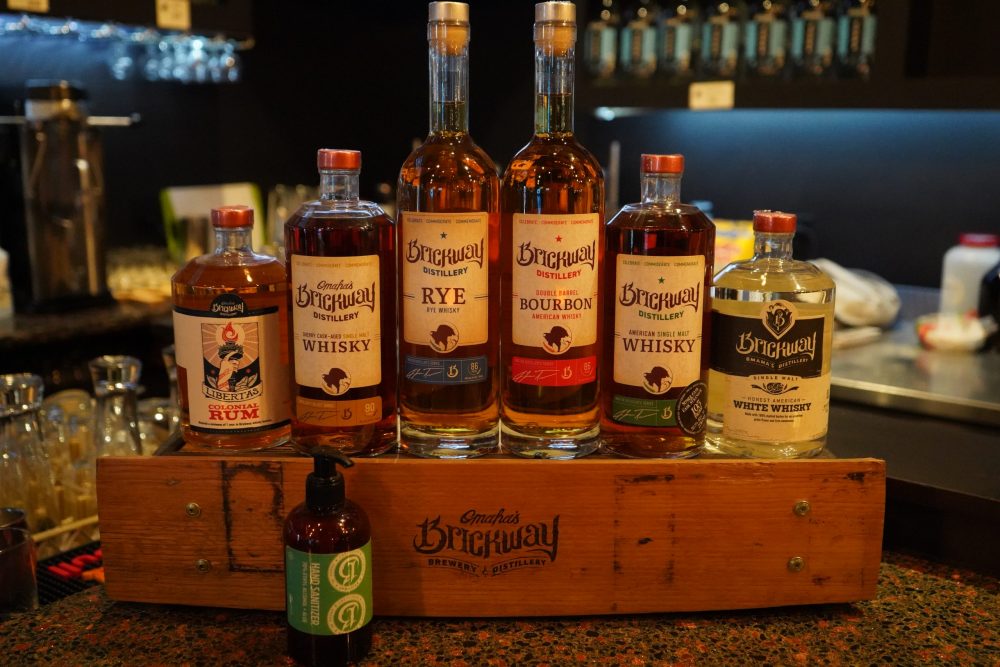 A taste note about my trip: One has to be in a certain mental state to visit their hometown. I was not in that state. I was run ragged professionally, in the middle of a family emergency, and overall shell-shocked from the previous year we’d all had. Maybe it was being around my fun aunt, maybe it was catching up with an old friend, or maybe it was the excellent whiskey, but my tender heart swelled with pride for my hometown distillery. I am very protective of the city I grew up in. I defend Omaha a lot. When the coastal know-nothing elites act like Omaha is a one-horse flyover town, I bristle. I have a whole diatribe about it: “We have the best zoo in the world! We are ranked higher than the San Diego Zoo! Bet ya didn’t know that! I laugh in the sad face of any other zoo! Omaha has the best steak in the world! The Ruben sandwich was invented in … Brooklyn? Miami Beach? St Petersburg? Wrong! Omaha! Ever heard of Warren Buffet? Malcolm X? The College World Series? Elliot Smith? NICK NOLTE?! Nick F*#king NOLTE?!” I’ve always been proud of the collectively weird creativity and leadership that comes out of Omaha. How perfect that the Brickway Distillery is rare and well done too. I must castigate myself for assuming these Omaha whiskey guys would provide for my first scathing review at Malt. Mea Culpa. After tasting the Brickway Sherry Cask, I knew I would be writing a love letter.

Color: a shade of brown.

On the nose: A wash of vanilla. I thought the aroma was too bourbony not to be made of corn.

In the mouth: Marzipan, a light yet unmistakable herbaceous oregano. Grassy and clean finish.

Conclusions: I liked this one very much, because it was unexpected. I’m not alone, last year it won a Gold from the New York International Spirits Competition. It’s roughly $50 and 43% ABV.

Color: a bright shade of brown, hints of red.

On the nose: Shy nose, maybe a bit dull.

In the mouth: the typical bubble gum notes, gently sweet, and a Playdo finish.

Conclusions: My least favorite, but definitely not offensive. It just didn’t make my tail wag. Made of a mash bill of corn, rye, malted barley, and white wheat. It retails for about $50 and is 43% ABV.

On the nose: A typical rye, shy, then opens up with some water revealing sugar cookies and faint vermouth.

Conclusions: I’m not crazy about this rye, it’s a bit too simple. Boring, or classic? It can go either way. I like that the bottle’s label is blue and not green, like every other rye whiskey on earth. Again, roughly $50 and 43% ABV.

On the nose: Reminds me of Southern Comfort, predominant cinnamon and banana. I was not impressed with the nose and I was expecting something rough.

In the mouth: Deceptively different from the nose, my favorite thing! Flat Coke on the palate. A touch of Mrs. Buttersworth’s Syrup. Layered and nuanced because that sweet goes away fast and gives you a seafood-like dirty yet refreshing taste. Brackish, with a little sour cherry. I love it. Best dram I’ve had in a long time. There is something intangible on the finish that I can only describe as fresh, and it very much reminds me of the Springbank Sherry 19 yr.

Conclusions: Excellent. Complex. A whopping 45% ABV, slightly more than the rest. This retails for roughly $70, and is Nebraska’s first sherry casked (Oloroso) whisky. If you don’t live in Nebraska or its surrounding states you can’t find it, a pity.