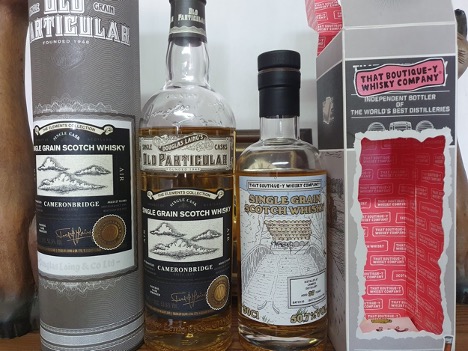 No matter how far we have come, it is always good to return to our roots.

Dora’s recent review of an A.D. Rattray 25-year-old North British grain whisky reminded me I also had a couple of very well-aged single grain Scotch in my stash. It’s amazing to have experienced the drastic quick switch of preferences from blended Scotch to single malts in my lifetime.

From my teen years to my early 20s, Johnnie Walker Black Label was king here in the Philippines. I have strong memories of friends and relatives who used to brag about the copious amounts of Johnnie Walker Black Label or occasional Blue Label they’ve bought, gifted, received or guzzled; then the single malt movement slowly started. As someone a couple of years ahead of the trend, I had mixed feelings when I saw people I grew up with start to choose single malts over Johnnie Walker. Most of them now like to brag about the big brands of single malts they’ve had.

As great as it is to see people expand their horizons, it’s sad to know that most are only into it because it is, quite simply, on trend. Most of these aficionados, sadly, have no idea of the rules to make a single malt, nor of the better, less-marketed brands. Somewhere along the way, as they experienced brand marketing, it got sealed tightly into their heads that any whisky categorized as a “blend” is automatically inferior. Something about the word “single” makes them relate it to being pure. Pure in what way, though? Most of them can’t tell the difference between a blended whisky and a blended malt. It’s like they go deaf after they hear the word blend.

They eventually learn that a mix of single malts and grain whisky result in a blend, and that blends are cheap and light in flavor due to the light flavor of the grain whisky. As a result, they end up thinking that grain whisky is not worth their time, which is a shame. For one, it’s safe to say most of them have never tried any grain whisky by itself due to the lack of availability, but don’t knock it until you’ve tried it, right? (Suntory’s Chita, as a Japanese whisky, seems immune to this mindset.)

Yes, blends are cheaper because grain whisky is cheaper to make. Corn and wheat, which are the most commonly used grains for grain whisky, are more affordable than barley, the type of grain used to make single malt. Due to being distilled in column stills, they are also lighter in flavor and more efficient to produce. Does being cheaper make something worse, though? Of course not.

It’s true that blends and grain whisky aren’t as full-bodied as single malts. Does it really matter, though, when most of them prefer chill-filtered and diluted single malts with a light profile they can call smooth and drown in ice? It’s slightly disheartening and annoying when these “know-it-alls” consider any other column-distilled spirit inferior as well, as if all column stills are the same. It’s also odd that American whisky like rye and bourbon, which are mostly column-distilled, are left out of this bias. My hunch is that this is marketing and bandwagon magic at work.

Consider that the majority of the blends bottled now are different from what brought blended Scotch its initial renown globally. I consider myself fortunate to have tasted a few blends that are said to be from the eighties. My opinion of them ranges from decent to good, though from time to time, you will hear longtime Scotch fans attest to the great quality of blends from the sixties. Some also lament the change in quality of their beloved brands of blends.

These experiences have made me wonder, is it really the grain whisky’s fault that today’s blends are what they are notorious for? It’s like we are saying that single malts are faultless, triggering the idea that the inferiority of blends is a result of the grain whisky. Maybe some blame should be put on the blenders, or on the ones directing the blenders. Those in the know are aware that today’s blends have a significantly altered malt to grain ratio (around 20:80) compared to a few decades ago (around 40:60). What if some crazy indie bottler started bottling blends at where the ratio of single malt outweighs the grain? Would our opinions of blends and grain whisky change then?

Anyways, on to the single grain whisky to be reviewed. First up is a 27-year-old Cambus bottled by That Boutique-y Whisky Company. Diageo, then United Distillers, closed the distillery in 1993, and now serves as a cooperage site.

On the nose: Immediately intense heat followed by a medium scent of paint thinner. There’s a surprising aroma of carrot cakes, toasted coconut chips, more paint thinner, leather and sauteed onions. This is ended by a light yet lasting smell of apple pie.

On the nose (again): Still as hot, but a much-diminished, and briefer, scent of paint thinner. More intense aromas of coconut sugar syrup, digestive biscuits, toffee and honey.

In the mouth (again): Nearly the same, but the coconut sugar syrup, butterscotch and digestive biscuits are more intense at the end.

This is just good. It’s not bad. It’s not great. It’s not even in the realm of being memorable. The strong flavors of paint thinner remind me of an old Port Dundas bottled by Vom Fass. It seems like this was distilled to a very high ABV and aged in pretty used-up casks. The majority of the single grains I’ve had were more cask-flavor dominant. This tastes like there’s a pretty equal balance of distillate and cask flavor, which didn’t turn out well for the bottled whisky.  What helps make me feel better about this whisky is the price. It only cost me about $100 for something this old—always a treat.

Everyone should try this at least once, because depending on your age, Cambus whisky could have been in the blends you were drinking while growing up. Maybe it’s still in some of the really old blends today. Why not shed some light and take a pleasant trip to your past? This also proves that not all old whisky is excellent, which seems to be a misconception thought of by most consumers.

Second is a 27-year-old single cask-strength Cameronbridge bottled by Old Particular, which is under Douglas Laing. This grain distillery is said to be the largest in Europe and is under Diageo. Who would have thought I’d end up reviewing two single grains from Diageo distilleries?

On the nose: An intense and bungled-up mix of vanilla, honey, cinnamon, orange peel, and orange jelly, with something tart at the end. Those quickly go away.  A layer of medium intensity and lasting aromas like dried apricots, dried figs, grape jelly, plums and other stewed fruits I can’t identify comes out, too.

This is how I wish most grain whisky would be. It’s still full of life. Full-bodied, with complex (for a grain) lasting flavors and low heat, despite the ABV. Need I say more?