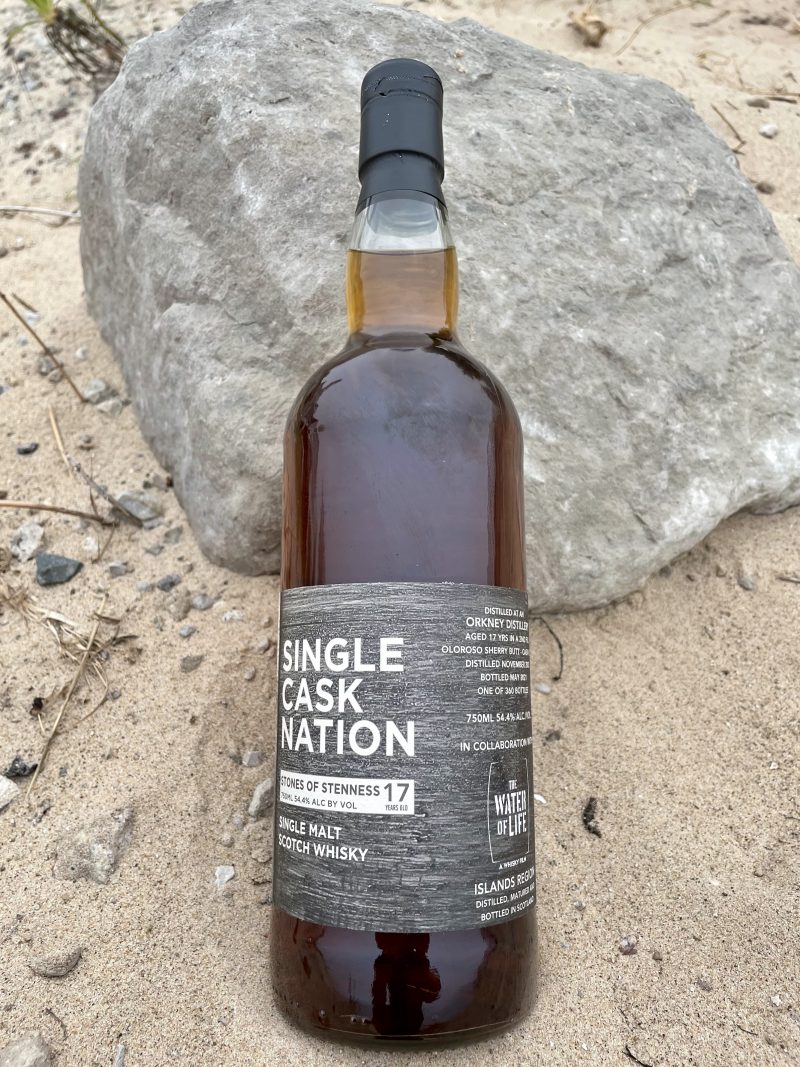 You know what I could go for right about now?

A sherried Scotch whisky. None of this sherry-finished stuff, either. I’m talking about proper sherry maturation, ideally for a period approaching two decades. Also, it has to be a true sherry cask; you can keep your “sherry-rinsed,” thank you. Finally, I like my casks clean. If it reeks of sulfur or stinks to high heaven like a puddle of brackish pondwater, I’ll be very disappointed.

With the aforementioned stipulations in mind, is it any wonder that the whisky cognoscenti are eschewing sherry casks entirely in favor of bourbon barrels? This dichotomy was most recently explored by Sam in his consideration of a pair of independently bottled Benrinnes whiskies. I’ve mused on it myself, as has perhaps every other writer on the site. If there’s a consensus that has emerged, it’s that the high price and variable quality of sherried drams skews the risk/reward heavily in favor of the bourbon barrels.

A really good sherry cask “just hits different,” as the youth say. The fact that they’re fewer and farther between nowadays doesn’t change the fact that there’s a particular type of whisky satisfaction that can only be achieved through a sherried dram. I have written before about how I believe that a sherried malt is what a lot of people think “good whisky” tastes like. The classic sherry cask notes – dried fruit, spice – are additive to so many types of Scotch, from the peaty drams of Islay to the classic Speyside malts.

So, without being able to taste in advance, how does a whisky consumer ensure a better-than-average chance of getting all the benefits of the sherry cask experience with none of the drawbacks from the use of lesser casks? The answer, as with so many things in life, is “trust.” Knowing which independent bottlers consistently deliver the goods will go a long way toward helping you reach the sherry promised land.

I had this thought in mind when I noted the arrival of a sherried whisky from our friends at Single Cask Nation. The generally high quality of their selections has, to me, justified their premium prices. I was yet more inclined to buy a bottle when I saw that this particular malt came from their “Stones of Stenness” series.

My previous run-in with a “Stones of Stenness” was the 18-year-old ex-Bourbon barrel from the company’s 2018 U.S. retail outturn. You’ll recall that I liked that one very much indeed, though I neglected at that time to investigate exactly what the eponymous stones are. Fortunately, Single Cask Nation has kindly clarified the namesake in the below passage from their site, reproduced verbatim:

Speaking of “one of the oldest,” you’ll recall that one of the oldest running complaints here on Malt has been the woeful quality of official Highland Park bottlings. Though Mark bucked that trend in his consideration of the inaugural Cask Strength bottling, the preponderance of evidence still points savvy Orkney shoppers toward independently bottled expressions.

So, in a convenient marriage: we have both a distillery and also a cask style best showcased through independently bottled whisky. My hope is that the overlap of these circles in the Venn diagram will justify the price of $195. I should note that my purchase also entitled me to a ticket to a future screening of “The Water of Life,” (strongly recommended by Alyssa) which has a tie-in with this whisky and a logo on the label.

Some more specifics, before I kick off with the tasting: this was distilled in November 2003, aged 17 years in a second fill Oloroso sherry butt (cask #2398) before being bottled in May 2021 at a strength of 54.4%. 360 bottles were produced. 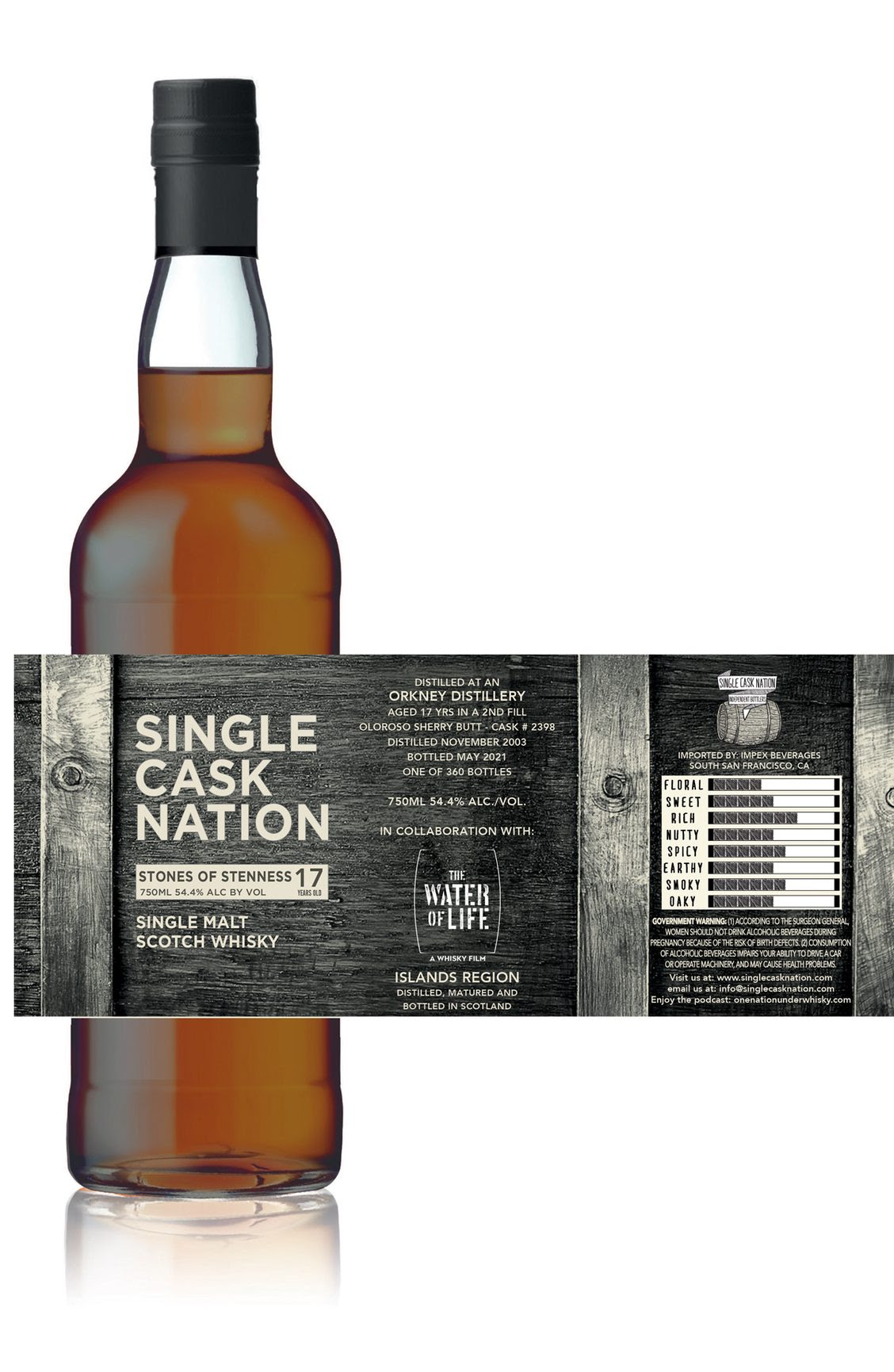 On the nose: The hoped-for clean sherry cask is immediately evident. Abundant dried fruit is augmented by rich and sticky-sweet aromas of honey and maple syrup. Cooking spices such as cardamom and peppercorn meet a meaty note of grilled ground beef, imparting a spicy, smoky, and savory character. With time in the glass, I start to sense the specific scent of Sriracha hot sauce. There’s an elegant touch of oaky wood in here, though of the most dignified and restrained variety. Importantly, there’s nary an off note of the any of the aforementioned varieties.

In the mouth: Starts with a very firm stony note (appropriately, given the name) that expands horizontally as the whisky rolls up the tongue. The dried fruits (raisins, sultanas, currants) appear with maximum intensity toward the middle of the mouth. In a surprising turn, this takes on some subtle but present maritime notes of saltwater and seashells at the very top of the tongue. Turning spicy as this approaches the finish, I get some piquant notes of black pepper and cinnamon toward the back of the mouth. A lengthy finish leaves a delectably mouth-coating sweetness married to a tingly heat and a faint aftertaste of cola. This never really ends, with stony wisps tickling the gums and the top of the mouth at random for a long time after the final sip.

This is on par with the best bottles I’ve had from Single Cask Nation, in terms of delivering something truly special and not readily available elsewhere. The sherry influence is entirely clean, in the sense of not imparting any of the repellent aspects that I dread. More importantly, however, is the exquisite balance of all the elements here. The sherry notes are present but not overwhelming; at all points through the nose and the mouth, there are counterweights from the underlying spirit that keep everything in check. It’s not a sherry bomb, but it’s a superlative manifestation of the style that delivers pleasurable drinking along both the intellectual and hedonistic axes. Though I am personally very fond of Single Cask Nation and its pair of founders, I’m equally gratified to report that this independent bottler continues to win my custom with their discerning selections.