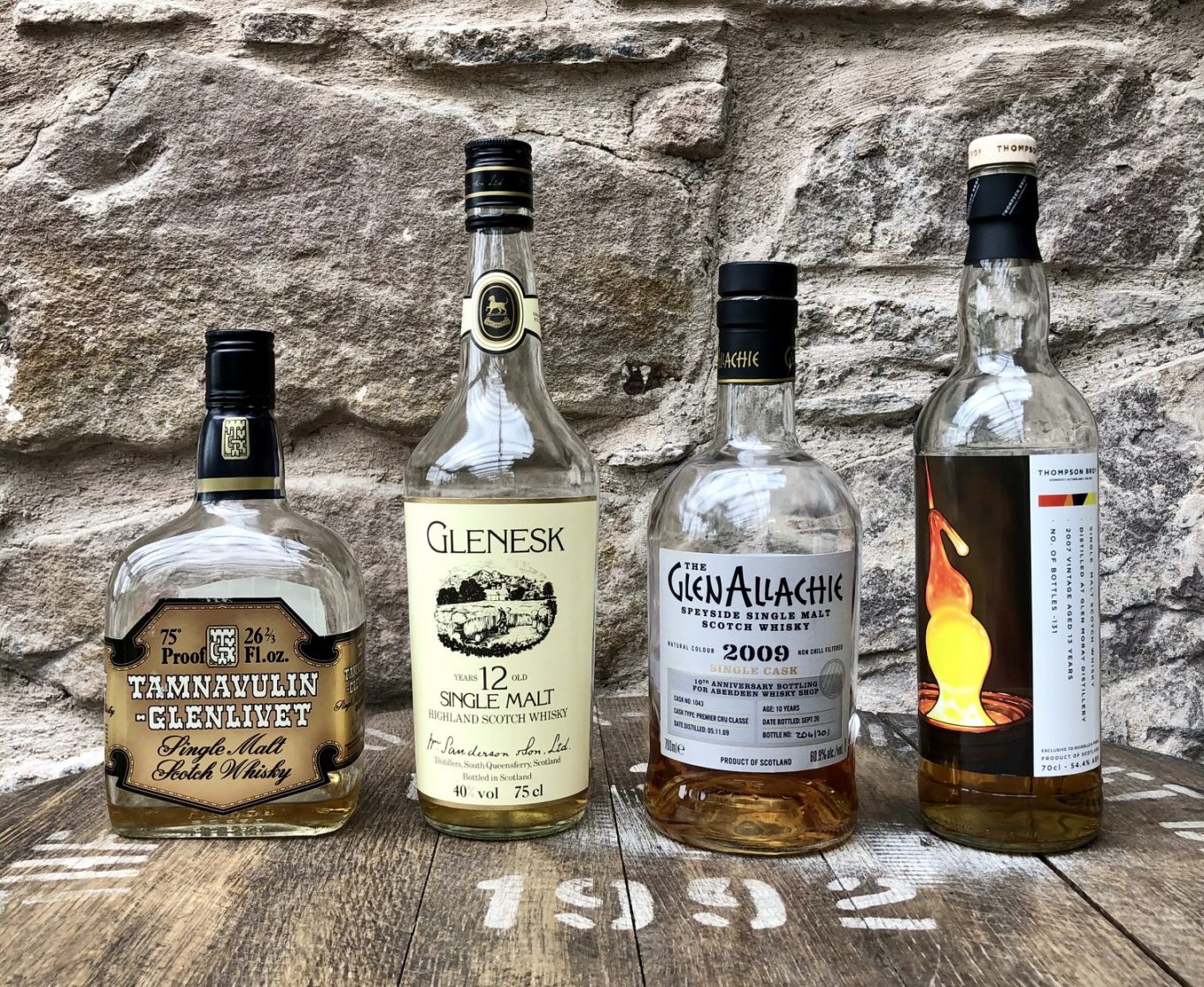 Alcohol levels in Scotch are an interesting discussion point.

I often hear whisky fans stating their allegiance to high strength cask strength whiskies only, or others bemoaning a 40% or 43% release. These statements are punctuated with surprise when a whisky at 40% performs well at a tasting. I’m reminded of the infamous Aqvavitae episode where most everyone rated Tomatin Legacy (40%) very highly, or other occasions where an inexpensive vintage blended whisky performs well despite the low ABV.

Nevertheless, I’m sure most readers will have experienced significantly disappointing whisky at the lower end of the alcohol scale and wondered why the whisky was ever released in virtually tasteless form. New whisky drinkers, on the other hand, are blown away by the high strength offerings.

Beyond these discussions, I began to wonder if higher strength whiskies sometimes conveniently hide lacklustre spirit that would disappoint at 40%. I’ve devised a rudimentary experiment at the end of this article to compare… well, perhaps not apples with apples, but at least similar fruits with one another. I had previously tried reducing the strength this with a Tomatin. First, I’ll take a few moments to discuss alcohol in whisky more generally.

I’m only dipping my toe into explaining what has been described as the most chemically complicated drink in the world. Hopefully it’s well understood that whisky is largely a water and alcohol mixture with less than one percent of the total being the organic molecules that contribute to flavour and aroma.

The alcohol in whisky should be ethanol (C2H5OH) as the process of cutting the foreshots of a distillation should avoid any methanol (CH3OH) getting into the whisky. The properties of the water and alcohol mix are unusual in that the chemio-physical properties are driven by a hydrogen bond. The alcohol molecules do not dissolve in water but continue to exist separately, the molecules are loosely attracted to each other.

This results in an imperfect mixture where the interactions of the one percent of other compounds in the mix create preferential arrangements with ethanol, which can group together around these molecules and create pockets of ethanol. The various flavour compounds may be soluble in either water or alcohol, and the changing ratios of both directly impact on the flavour that the whisky drinker experiences.

This can enhance – but also mask – certain flavour compounds depending on the water/alcohol ratios. The initial sensory experience of the whisky is not the liquid itself but the interface between the whisky and air as the aromas break out of the solution. This adds another complex layer of physio-chemistry that scholars have battled with.

Long before all of that was worked out by scientists, the story goes that before alcohol levels could be effectively measured buyers could mix gunpowder with whisky and then light it and the brightness of the flame was ‘proof’ of the alcohol levels. Under-proof led to a weak blue flame, or no flame at all, whilst over-proof could result in some cartoon-style explosions. 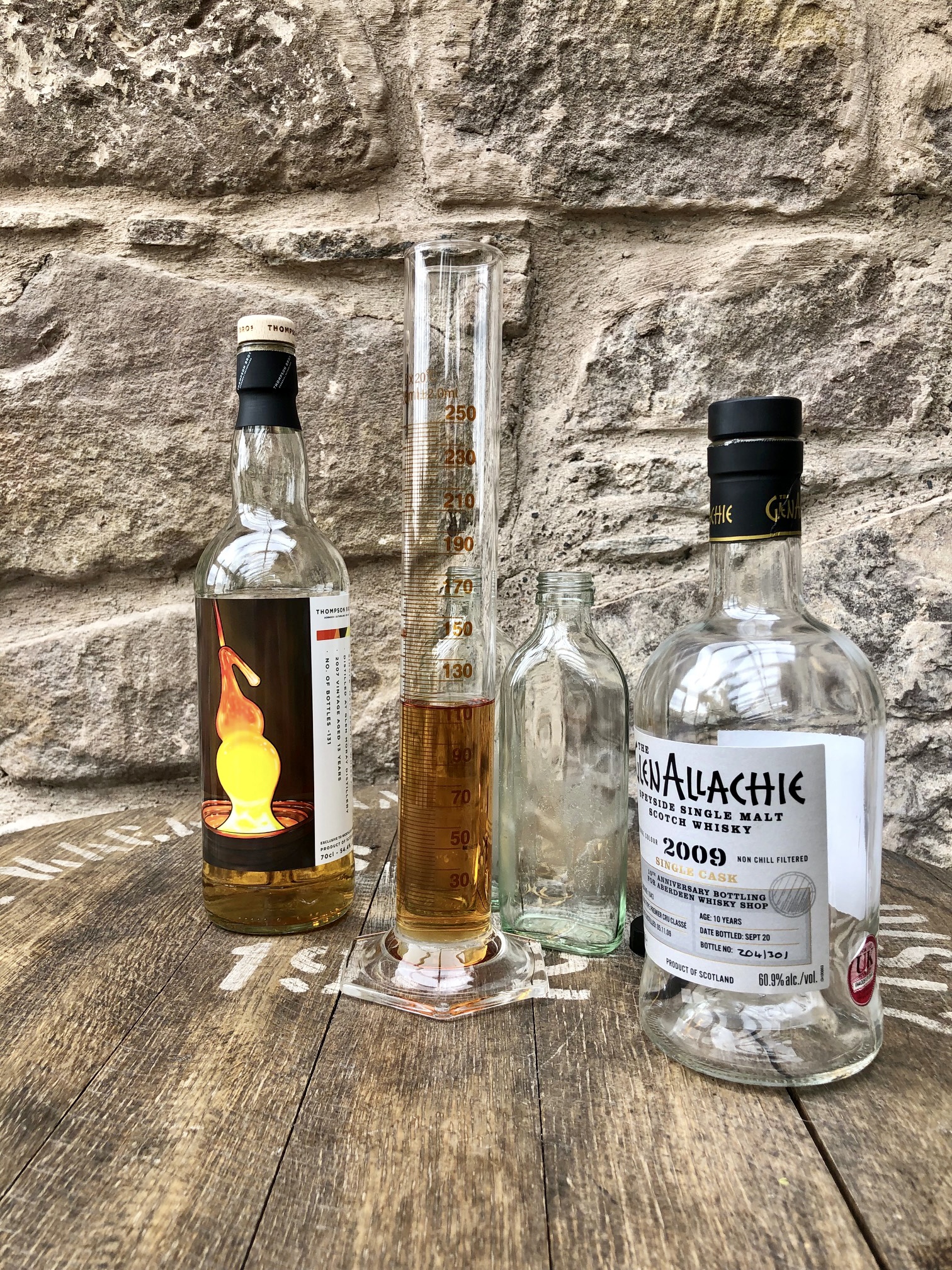 Experimentation identified the ideal proof to be 57.15% ABV which became the British 100 degrees proof. This occurred in 1818 when a legal standard based on specific density was defined in England. 100 proof was defined as a spirit with 12⁄13 the specific gravity of pure water at the same temperature. The US proof is different and is always double the ABV.

In the UK, between 1915 and 1920, the influence of the temperance movement – and in particular Lloyd George – resulted in quite a bit of political horse trading, as George repeatedly attempted to reduce the alcohol levels in whisky to as much as 50 degrees under proof (28.6% ABV). The eventual settlement of 30 degrees under proof worked out at 40% ABV. This was still lower than the 15 or 22 degrees under proof that was standard at prior to 1915, which equated to 48.6% and 44.6% ABV in today’s terms.

40% ABV as a well-established minimum was eventually adopted by the Scotch Whisky Association as one of the many rules of the SWA. The SWA was set up in 1942 and represents 95% of Scotch whisky distillers, blenders, and bottlers.

In 1980 in the UK adopted – in line with the EEC – the international measurement of Proof, ending the 162 years of the Sykes formula. At the same time, the UK switched from the standard size whisky bottles of 26 2/3 fluid ounces to 750 ml. 1992 saw the introduction of the Standard European Spirit bottle at 700ml.

Not every distiller or bottler changed over to the new conventions immediately in 1980, but these changes can be quite helpful in dating vintage bottles as you come across them. Take a look at the vintage Glenesk bottle, which is 40% ABV but 750ml in size. This places our bottle squarely in the 1980 to 1992 bracket. Further research of the history of Wm Sanderson & Sons using the fascinating Schweppes Guide to Scotch shows the distillery was converted back to malt by DLC in 1965 and Sanderson were distilling at Glenesk on licence from 1980 with the distillery having been called Highland Esk, North Esk, Montrose and Hillside previously. Glenesk was closed in 1985, therefore we can further narrow the window of this bottling to this 5 year period.

You’ll see from the conversion table I created below that there are some significant trends between the whisky proofs that were popular pre-1915, and the modern higher strength releases. This is despite the 101 year dominance of the (political rather than artisan-led) 30 degrees under proof. (40%).

Despite the artificial origins of the 40% alcohol level, I have discovered some really interesting drams at this lower alcohol limit. It’s hip-flask strength in a way a cask strength whisky is not. I decided to dilute a few whiskies down to 40% and see how they stand against whisky that was presented by the bottler at the lower strength to begin with. The whiskies that required the largest amount of water were diluted in stages over a few weeks to give them a decent chance to balance out before the tasting but acknowledge that this falls short of the likes of Cognac which can be diluted by 1% ABV at a time, a process which can take over a year.

The gradual approach is being used by many bottlers, from Thompson Bros to Isle of Raasay Distillery. Before you dismiss anything below cask strength, remember that the blenders who develop blended and single malt signature ranges typically work with whisky at 20% ABV, which is close to the percentage where you get a continuous phase of ethanol and water without pockets of either developing. It also avoids numbing the nose and palate with ethanol.

For all my tasting notes, I carry out that same process unchanged here. First, I taste a familiar and complimentary dram as a control. For this tasting I tried a vintage 5-year-old Balblair from the Italian market that was presented at 40%, matured in bourbon barrels. Second, I tasted the samples across two sessions, comparing the notes on the second session. Finally, I gave each dram 30 minutes to open up and used a glass cover to help contain all of the aromas.

The whiskies are a selection of interesting ones, but not directly linked in any way. Some are vintage, and some more contemporary offerings. It’s worth noting that the vintage drams are crystal clear at 40% and a very consistent colour, so we can assume that these were chill filtered and to some extent may have been artificially coloured. The Glen Moray and Glenallachie are presented non-chill filtered and not artificially coloured. 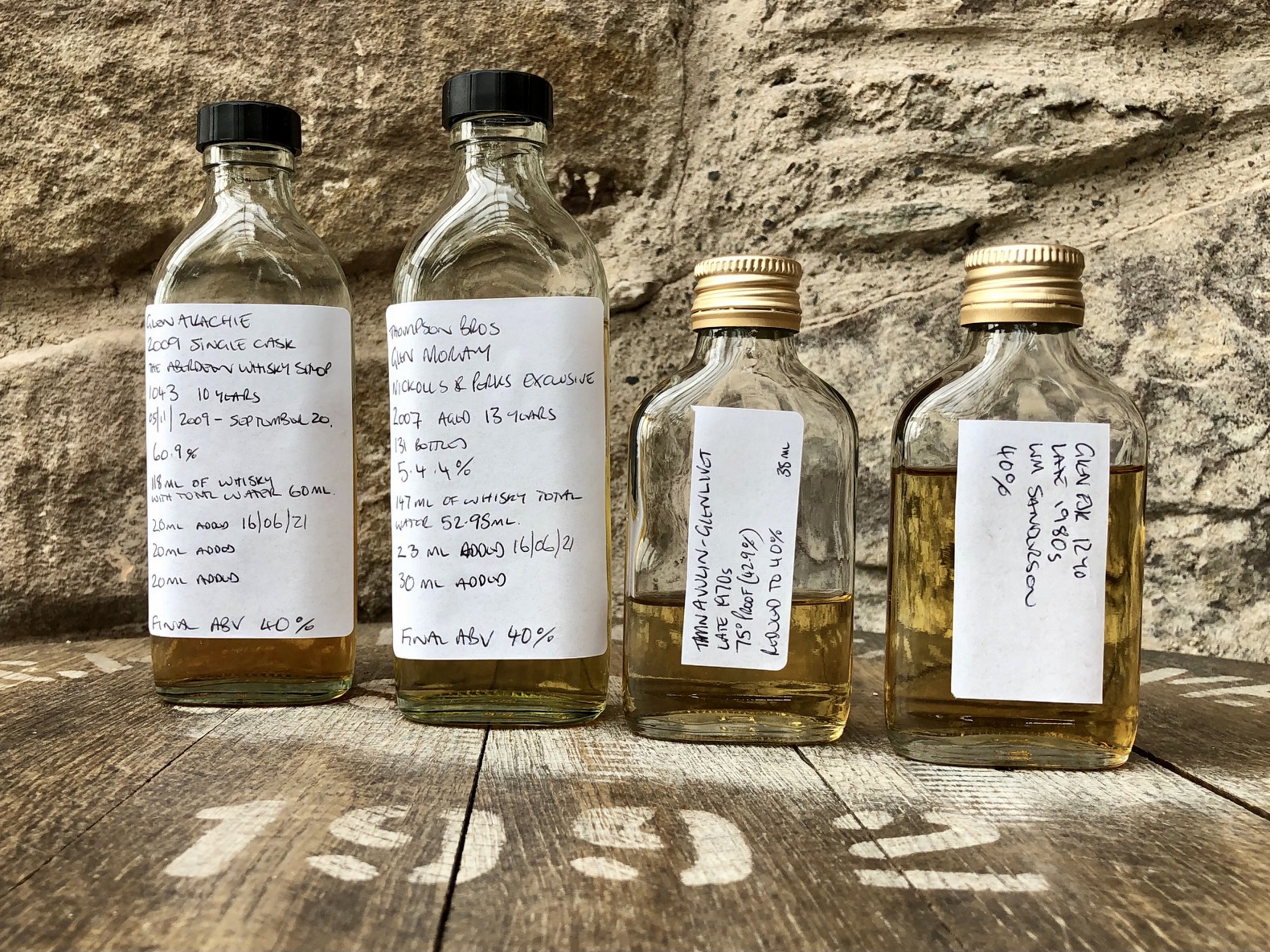 On the nose: Immediately rich fruity caramel, Pedro Ximenes sweetness, very rich initially dropping away to fairground toffee apple, Brûlée, yeasty grape must. Sweet malted barley. Some definite indications of the heavy-handed use of paxarette here with a short dusty dry note on the finish.

In the mouth: Medium body, a continuation of the nose without the sharpness, some toffee ice cream, sunkissed raisins and some butterscotch.

It’s tasty and interesting, but with somewhat artificial and forced flavours.

Bottled sometime between 1980 and 1985 by Wm Sanderson & Sons Ltd. Sampled at original presentation strength of 40%

On the nose: Sweet, pale orchard fruits, Normandie cidre, some sherry in the mix, wholly more natural and more indulgent that the Tamnavulin, a whisp of smoke, dunnage floor, sulphurous, hay barn and stables.

This is a real surprise as Glenesk does not have a strong reputation across the board. It can be assumed that the malt for this comes from the spirit came from the Hillside maltings on the same site that from 1968 had 4 large drum maltings. These were initially oil fired, resulting in the sulphurous notes on the nose. I understand only one drum remains oil fired and its output is used exclusively for Craigellachie especially due to the sulphurous character that the oil firing imparts on the malt. 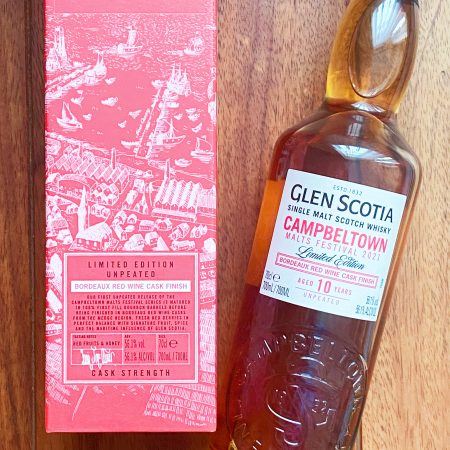