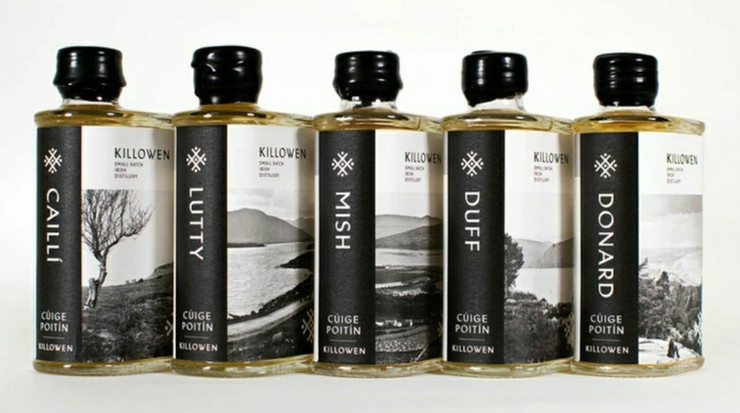 “I’ll shut up my mug if you’ll fill up my jug with that good old mountain dew.”

This is Malt’s first-ever review of Poitín; therefore, I hope I show the reverence deserving of a national spirit! Officially, Poitín has been around since the mid-1500s (although likely to be much earlier), and is Ireland’s most traditional, ancient drink. Poitín is not moonshine; typically, turf gets used to heat the wash, giving a much slower distillation. It is traditionally made using a grain or potatoes mash with variations from crabapples to wheat, sugar, and beets. This results in a clear, high strength spirit that cures joint pain, impotence, rheumatism and even induces blindness*!

Poitín’s usage by monks in their early monastic settlements had meant that the English ruling government got very animated about it and quickly outlawed the illicit production. This consequently drove manufacture and production underground in Poitín’s infancy, and for much of its ill-fated life. A mere 300 or so years later, in 1989, the law was subsequently expanded. A further ten years later, laws changed again to allow legal production and consumption in Ireland. Poitín even achieved EU geographical indication (GI) status in 2008, meaning that – for a spirit to be called Poitín – it can only be produced in Ireland.

They say the old ways are the best, but that doesn’t necessarily mean hiding underground with a tinpot and a barrel, or using oatmeal flour or bread mix to seal gaping holes in a still. This can mean several things, like: the type of still, method of heating, method of distillation, etc.

One distillery that embraces traditionalism is Killowen distillery. If you picture a traditional, “craft” distillery, Killowen’s distillery would probably be it. The distillery itself is what owner and orthodox distiller of Killowen, Brendan Carty, describes as “dilapidated, with trees growing out of it.” Still, inside, it strikes a nostalgic chord. The sight of the two hand-beaten alembic stills nestled in a hut amongst the inspiring Mourne mountains of County Down fills one with a sense of evocative rural distillation.

Brendan has described Poitín as getting a “bad rap,” and concedes that there are “some dodgy ones out there.” This is correct, but – if gotten right – Poitín can exhibit notes of toffee, pepper and spice. However, get it wrong and you risk having an almost toxic spirit with notes of methanol.

Ever since the ban was lifted (and within the last twenty years) the public interest in buying and tasting a drink so intertwined with Irish history has fuelled a resurgence and produced some cracking Poitín. Teeling, Ban Poitín, and Glendalough have all recently made every effort to ensure the spirit is brought back into the spotlight for all the right reasons. Founder of Ban Poitín, Dave Mulligan (who is often dubbed as the resurrector of Poitín) remarks that Poitín is the “Daddy of all Whiskey” and that it is enjoying a renaissance in many parts of the world.

Killowen Cúige is part of that renaissance. Cúige, Irish for “province” or “fifths,” is one of Killowen’s tributes to a spirit that ultimately shaped Ireland’s distillation history and subsequent spirit.

The mash bill for each is: 50% Peated Barley, 21.6% Un-malted, 14.2% Oat (malted & peat-smoked onsite), 7.1% Wheat, and 7.1% Rye. The key aspect of this is the relatively high oat content (compared to Killowen’s core range bills), which recognises the significant role the ingredient played in ancient distillation methods used centuries ago.

The spirit is double distilled, worm-tub condensed, and put in casks at full strength for the legally-required time of 10 weeks. Adding to the sense of these being truly “craft” and “very rare” is the hand-filled bottles, handwritten labels, and wax-dripped tops. The Poitíns even come with their own rustic stave, custom made for this genuinely one-off collector’s item. The set went on sale for £200, which includes 5 x 250ml bottles, each at a strength of 55%. It is a beautiful collection, and it was no surprise it sold out in rapid time.

The highest mountain in The Mournes – God’s country

On the nose: This opens up with lots of earthiness and ginger on the nose, then the woody notes cut through some of the complexity; notes like oak, cigar box, and then the sweetness adds a punch into proceedings. Vanilla and honey sweetness, cream soda, and green apples. The nose is so intricate; you can also find notes of light coffee, dark rye bread, and black pepper.

In the mouth: The sweetness fades away at this point, and immediately your mouth is submerged with an oily texture, more coffee bitterness, lots of spice with cinnamon and black pepper, milk chocolate and a light smokiness. More of the same with the finish, although the abundantly clear notes of creaminess, ash and vanilla are prevalent.

The Slieve Mish range to the east of Dingle peninsula

On the nose: Yet more complexity, classic sweetshop notes of liquorice and dark chocolate invite you in, then you’re hit with the spice of black pepper and sweetness from green apples, lemon zest and fleshy peaches,

In the mouth: A real mixture of sweetness from toffee, green apples and pink grapefruit, balanced out nicely with the spiciness of cinnamon, aniseed, and cloves. Then the light smokiness, cedar, and coffee beans all make for an exciting palate. On the finish, there’s lots of warmth, a flickering of smoke, and some liquorice.

On the nose: A real eclectic nose of sweetness, including lemon sherbet, honey, hints of caramel and fleshy peaches. Sourdough bread, some nuttiness, the bitterness of coffee beans, bran flakes and cut wet grass complete quite the concoction on the nose.

In the mouth: Smatterings of dark chocolate, marzipan and butterscotch, lashings of cloves and cinnamon, all laced with light smoke. Notes of aniseed, tobacco, liquorice, and black pepper ensure that the finish is long and warming.

On the nose: Fruity on the nose; lemon zest, oranges, and what I can only describe as sour Skittles. Typical spice of cloves, cinnamon, black pepper balanced with some earthy bark and pine.

In the mouth: Freshly baked Christmas cake, some star anise and yet more black pepper, clementines and light smoke. The finish has so much warmth; soy sauce with black pepper throughout.

Nose: For me, this nose is all about the fruity sweetness that it brings: clear lemon sherbet, spearmint, green apples, and kiwis. There is a subtle hint of Chardonnay, too.

Palate: The sweetness soon turns immediately to spice, and the black pepper, cloves, cinnamon, and Christmas cake all become very apparent. There is also the added notes of rich toffee and infused with a light smokiness. On the finish, there is more of the spice with the black pepper upfront, really warming with a long finish

For those looking for something a bit different – but not straying too far away from whiskey – Poitín is a great route. Brendan Carty has been very astute here. He has taken a national drink and – by finishing it in 5 different provincial firkin casks – has evoked a sense of regional patriotism.

However – to be completely honest – I did not find that many differences between the five casks finishes, the only ones being subtle ones. I’ll be honest, I did not purchase one of these 192 sets, but was kindly donated a sample set from @mydramofwhiskey.

Upfront, £200 may look steep, but – given that it’s five 250ml bottles, effectively hand-finished and presented beautifully – I’m not sure there’s a better bargain out there. Disappointingly, the only way you will get the set now is through auction houses… but be prepared to pay at least double the retail; it has been popular.

All things considered: uniqueness, taste, overall volume, history, and collectability (if you are that way inclined): the set achieves a score of

And at this point, I will shut up my mug as I have filled up my jug with a lot of that good old mountain dew. Slainte!

Image courtesy of Stir The Jam.