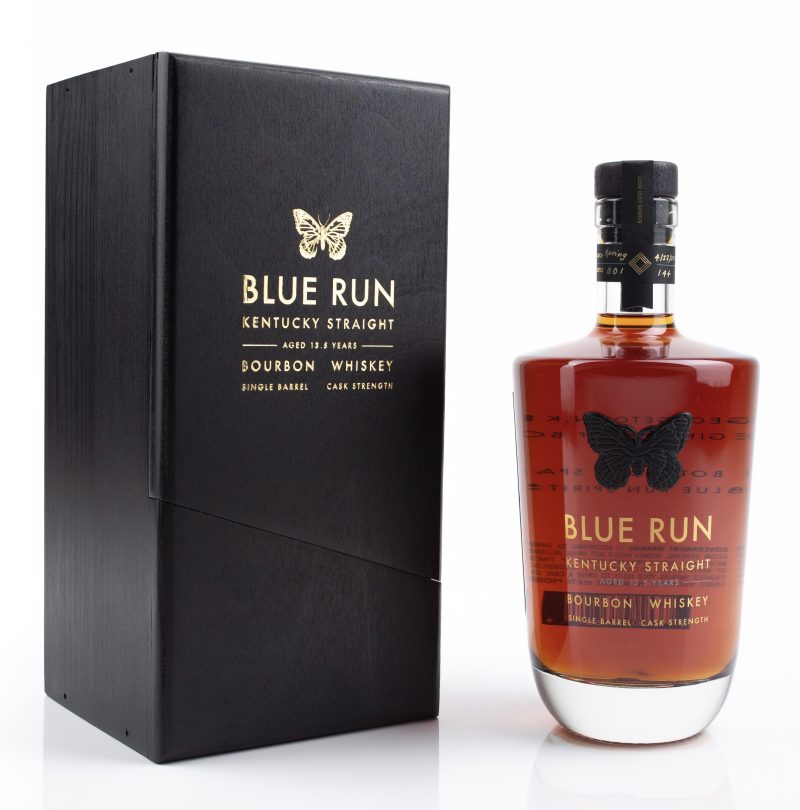 “There’s an old saying in Tennessee – I know it’s in Texas, probably in Tennessee – that says, ‘Fool me once, shame on… shame on you. Fool me… you can’t get fooled again.’” – George W. Bush

How many times will bourbon lovers fall for the same tricks? Based on the emergence of yet another “new” sourced whiskey with artful packaging, an inscrutable backstory, and an eye-watering price tag, the industry seems to believe that the credulity of buyers looking to splurge is a golden goose incapable of being killed.

I’ve preached in this space before about the manifold excellent whiskeys available in the $50 to $100 range. These aren’t merely passable daily sippers; they’re some of the most flavorful, balanced bourbons on the market at any price. The fact that they’re available consistently and for such a reasonable cost raises a nearly insurmountable hurdle for bottles bearing price tags north of $100.

After that preamble, longtime readers have surely girded themselves for a reflexive attack on overpriced sourced whiskey that re-treads the same worn paths that I have walked down repeatedly in my reviews here. In an attempt to defy expectations, I’m going to approach this review from the perspective of someone else, someone with a less warily cynical perspective on bourbon. I hope – by putting myself in an empathetic and earnest state of mind – that I might avoid the advance jump to fatalistic conclusions.

Taking that approach: I can honestly envision a scenario in which someone buys a $230 bottle of bourbon with unknown provenance from a brand they’ve never heard of. I’m not even talking about a legitimate rarity that might justify such a high asking price, for example dusty bourbon from a defunct distillery. In the situation I’m imagining, a normal person goes into a store, sees a bottle with a multiple-hundred-dollar price tag on it, and willingly spends their own hard-earned cash to purchase it.

Why, when there are many delicious and superbly crafted whiskeys at a fraction of this cost, would someone do such a thing? In the minds of many consumers (particularly those that don’t fancy themselves spirits experts), price and quality are positively correlated. Someone seeking out a bottle for a really special occasion might assume that paying such a hefty ask would ensure that they were getting at least a very, very good bourbon.

Not surprisingly, there’s an entire cottage industry of folks who have recognized this proclivity and who are willing to give the people what they want… good and hard.

The bourbons being reviewed today came from Blue Run Spirits. Called after a nickname bestowed on the Royal Spring by one of the co-founders when he was a kid (uh, sure, whatever), Blue Run’s first release came in October 2020, in the form of a 13-year-old bourbon bearing a $170 price tag.

From the get-go it was clear that Blue Run’s emphasis would be as much stylistic as substantial, with the bottle designer mentioned in the first press release alongside the Master Distiller brought in to lend his imprimatur.  Normally, I’d delight in picking apart each absurd adjective and spurious superlative spouted in Blue Run’s marketing schtick. However, the company’s overwrought promotional materials have already been comprehensively ridiculed in this amusing video by The Mash and Drum. Please give it a watch if you’d like to chuckle through chokes of dismissive disgust.

The bottles I’ll be tasting here are from Blue Run’s Single Barrel series. The press release for this release announces a “[a] Bourbon treasure hunt” in which participants are encouraged to “find the entire collection.” Packaging is once again a focal point; the last sentence of the first paragraph informs us that “[e]ach bottle comes in a custom, handmade black lacquered wooden box, adding to the collectability.”

Those patient enough to wade through this morass of buzzwords and hyperbole can actually find a few nuggets of information. We’re helpfully told that “between 104 to 150 bottles will be available from each barrel, with the proofs varying from 124 to 132.” As is the custom with these sourced whiskies, nary a mention of the bourbon’s distillery of origin is made.

However, we’re able to make an educated guess. As “liquid advisor” (a new one, even to me), Blue Run informs us that “[t]he iconic Jim Rutledge expertly approves Blue Run’s Bourbon selections.” Given we know that this is Kentucky bourbon bearing a mid-teens age statement, the most likely sources are Heaven Hill and the Sazerac company’s Barton 1792 distillery. As Mr. Rutledge is rumored to be bottling Barton stocks for his own Cream of Kentucky brand, consensus has converged around that distillery being the source of this whiskey.

Based on everything I have said heretofore, you might be inclined to dismiss these reviews out of hand. Reading back over what I’ve written with pretended impartiality, I can see that a charge of prejudice might be fairly leveled at me. From the sounds of it, I’ve already made up my mind not only to not like these whiskeys, but to loathe and despise them as abominations embodying the worst excesses of the current bourbon market.

You wouldn’t be 100% wrong if you came to that conclusion, but I’m trying my best to remain somewhat objective here. As stated before, I’m putting myself in the mindset of a person who is looking for a fancy (and, yes, fancy-looking) bottle to commemorate a big event in their life. Paying up in this case isn’t painful; it’s actually the point. Spending big dough is a performance of love, devotion, friendship, celebration, or one of the other positive feelings we associate with sharing whiskey.

Let’s see if Blue Run can deliver a whiskey that dignifies these noble sentiments?

The first bottle for review is the Blue Run Single Barrel B1. Dubbed “Fruit and Grain” (all ten bottles in this series have a moniker applied), we are told that this features “[m]ellow sweet corn and brown sugar apple butter that develops into mellow oak tannins.” This comes to us at barrel strength of 125 proof (62.5% ABV) and is aged 13.5 years, as are each of the whiskeys in this series. SRP for all ten bottles in the set is $230 (each). This sample was a gift from Billy, who has my sincere thanks.

On the nose: At first, rich and sticky-sweet aromas of brown sugar and maple syrup jump out of the glass. Very gradually, this transitions into a faint nuttiness that morphs subtly into some spicy notes of ginger and coriander. These elements all combine again into the sweet and bitter scent of sarsaparilla soda or root beer. Hovering above all this is a gently floral perfume, as well as a faint note of milk chocolate. Plenty to like about this on the nose… let’s see if the palate can deliver?

In the mouth: The spicy kick is evident again upfront, with a sharp and tingly texture as this meets the lips. Some of the sweetness emerges as a counterbalance once this begins its ascent of the tongue, with the floral flavors blooming in the middle of the mouth. The high bottling strength is noticeable throughout, in the form of both an initial bite of alcohol as well as a more persistent, lingering heat. This tacks toward a slightly astringent woodiness as it approaches the finish, where the flavor of cinnamon hard candy makes a momentary appearance as the final flavor before this disappears with only the aforementioned radiant warmth in the mouth.

I’ll hold the big conclusion for the very end of this review but – restricting myself to what’s in the glass here – I have the following thoughts: the nose is incredibly appealing, and set my hopes a-fluttering like the wings of the butterfly emblem on the bottle. I loved the dance between sweetness and spice. Unfortunately, the palate was overwhelmed by bitter oak and an infernal heat that crowded out the more pleasant flavors. At a price half that of what’s being asked for this, I would have docked a point. Considering the actual price, I’m shaving two points.

Moving along, we have the Blue Run Single Barrel B2. Called “Sweet Tooth,” the official materials tease flavors of “[d]eep chocolate and honey-drenched s’more.” As the inveterate owner of a chronic sweet tooth myself, this sounds very appealing. Bottled at 128.3 proof (64% ABV), this was once again a sample from Billy.

On the nose: Much fruitier to start, this presents a cheery nose of ripe cherries and pomegranate seeds. There is some of the promised sweetness, but more in the form of fruity hard candies than any rich notes of chocolate or honey. After some time in the glass, I begin to pick up faint citrus accents of lemon zest and orange. There’s a subtle greenness of freshly cut aloe vera and eucalyptus to this. With time, I get curious notes of Belgian blonde beer and cured beef. Tasted in order, this shows elements in common with the first barrel but mostly is possessed of its own personality.

In the mouth: Same tingle upfront, but this pivots more quickly toward the rich sweetness. Interestingly, this tastes like the first whiskey smelled, with those sticky-sweet notes greeting the tongue as the whisky moves into the mouth. There’s a drying texture of woody tannin as the whiskey progresses toward the midpalate, where the cask influence again imparts a slight bitterness that overwhelms some nascent notes of mocha. Some of the cherry notes from the nose combine with the aforementioned eucalyptus to produce an aftertaste reminiscent of cough syrup as this fades into the finish. Despite the marginally higher bottling strength, this tastes less hot and better balanced throughout.

Marginally better on the nose and much better in the mouth, this is a far more satisfying experience overall. I can imagine that someone who had boosted their budget to secure a bottle of this might think that they had done well for themselves. This showcases a few novel notes and has reasonably good balance through the palate, bar a mild excess of barrel influence in the middle of the mouth.

Is this enough to win this very, very expensive whiskey even an average score on the price-sensitive Malt scoring bands?

Returning to my initial premise: I don’t begrudge anyone the right to pay up for a bottle when they’re feeling exuberant. However, the purpose of this site isn’t to hand out plaudits to every whiskey that comes our way in order to give our readers a warm, fuzzy feeling about their impulse purchases. Rather, I’m here to educate and enlighten. To that end, please allow me to suggest some alternatives:

There are a few bottles of fairly pricey bourbon that actually justify their cost by providing an exceptional sipping experience. From Wild Turkey, you have the Aged 17 Years, Bottled-in-Bond, and Revival expressions in the Master’s Keep range, as well as the Russell’s Reserve 2003 release. Four Roses delivered the goods with their 2020 Limited Edition Small Batch. Those able to make the pilgrimage to the Heaven Hill distillery would be remiss not to pick up a bottle of the Evan Williams 23 Year Old. Shoot, even the maligned Knob Creek Limited Edition 2001 is a better bang for your buck, at roughly half the price.

Whatever you’re celebrating, I hope you’re able to mark the occasion with some really special whiskey, not just a bottle designed to part you from your money by looking the part. You deserve it.