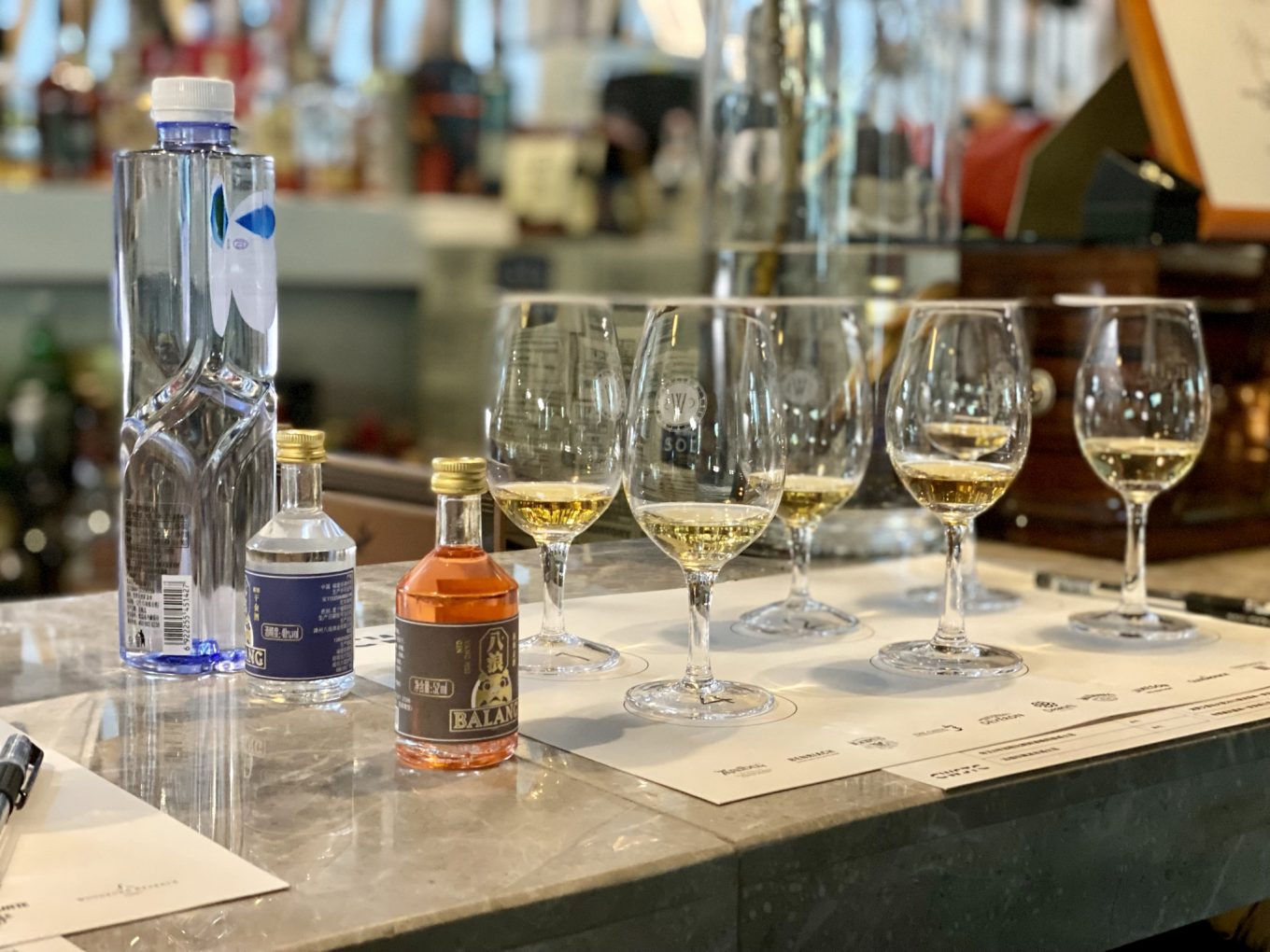 China has yet to tackle whiskey – though there is one meager offering and a legitimate distillery in the works – but it is rich in gin.

I used to be a whiskey-only kind of girl, but the palate shifts. Gin became my number-two after a local bartender revealed the wonder of a gin and tonic on a hot summer day in June 2020. Shortly after that, my first encounter with China’s version of this subtle wonder came that same month, when I stumbled across a half-size bottle of Peddlers while staying at a hotel in Shanghai.

Even when I lived in Beijing, way back in 2014, China had delivery of anything that your heart could imagine down pat. For one thing, far looser rules than America when it comes to alcohol mean that companies can deliver goods to you in under two hours, or even an hour, for far less than it would cost in the States. It is something I love about being here.

So, that lazy summer night, I had a small bottle of a gin I had not yet discovered and a few small bottles of East Imperial Tonic Water delivered from an app to my Swissotel. Living in China has birthed an odd appreciation for bathtubs; since most places here come with a shower, unlike the suburban world in which I grew up, I often sprang for a “staycation” nearby with a tub. (Thankfully, I eventually discovered that Taobao, China’s biggest online shopping platform, could deliver bathtubs, too. Plastic, but hey! A hell of a lot cheaper.) Anyhow, what goes better with a nice hot bath in a spa tub than an icy gin and tonic? Nothing, that’s what. And thus, with a little delivery, my world changed. 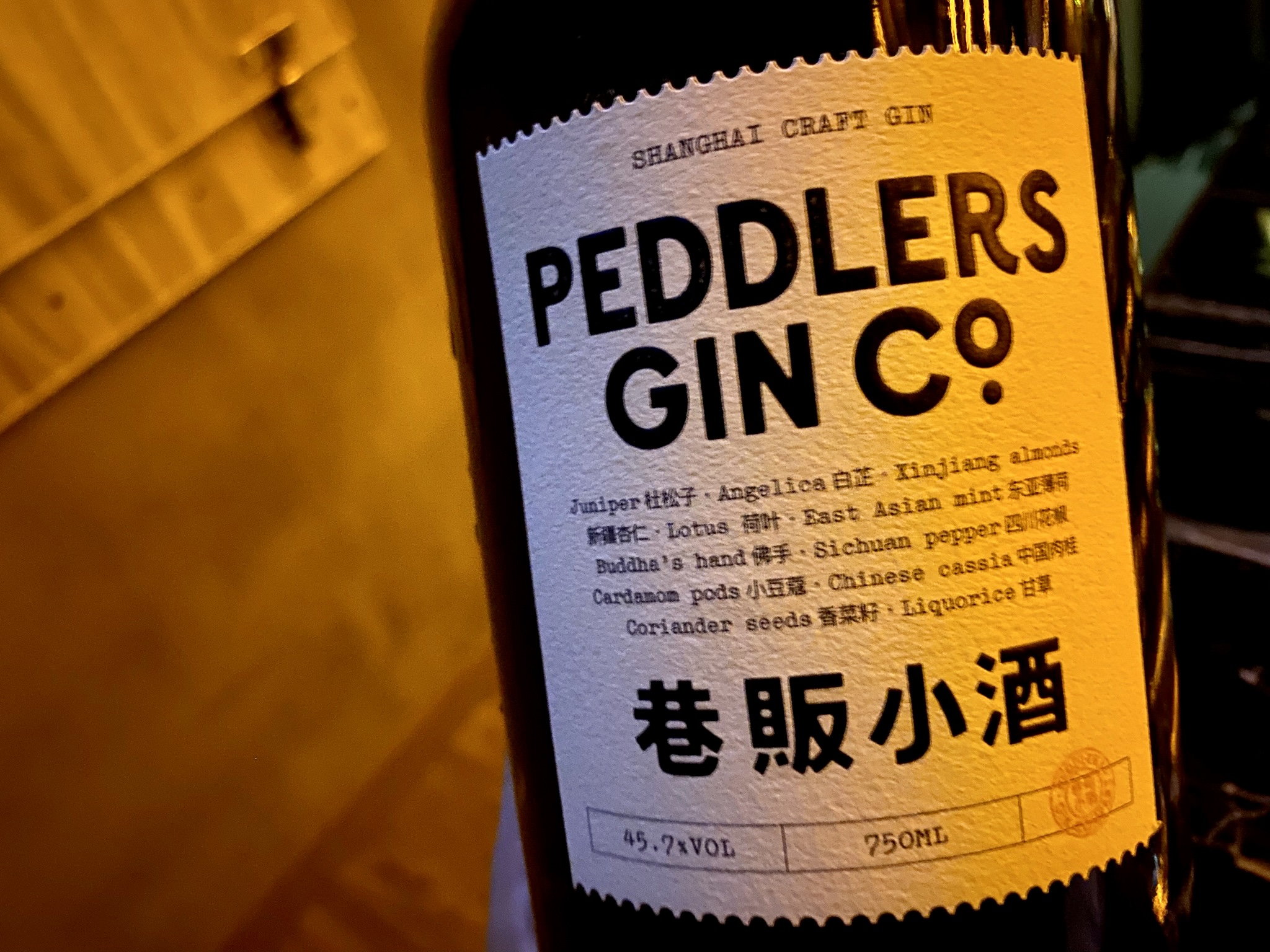 Peddlers’ website and promotional materials are vague when it comes to their origin, but share incredible detail about what’s inside the bottle. I suppose that’s better than the false backstories given so often to my first love, bourbon; the choice focuses on the taste, not the fluff… and there is definitely more than enough taste to go around.

I’d be lying if I said that the gin has some subtle, lengthy finish that changes lives; it doesn’t – at least, not the standard offering. But, it has a punchy taste and an incredible ingredient that is unique to China and gives it a fascinating flavor.

Thanks to globalization, many have heard or had the fiery pleasure of tasting Sichuan cuisine; Sichuan is a province in China known for its hot-as-hell food. Either way, what the makers of this gin have done is deposit just enough Sichuan pepper to add a kick that you won’t find in other gins, without overpowering it. Of course, they don’t stop there; the usual juniper is present, as well as lotus, cassia (a relative of cinnamon), Buddha’s hand, almonds, licorice, mint, angelica, and cardamom, all sourced from China. It’s a beautiful combination that you can read more about here.

One of the most remarkable things about this product is that it’s that rare gem: a liquor NOT available in America, but present in Canada! There, it’s distributed by the Beverage Collective, as well as Vietnam, Singapore, Taiwan, Hong Kong, Australia, and New Zealand—and, of course, here in mainland China.

Peddlers’ claim to fame is being the first Chinese gin, but it is not the last. More than a year after I tasted this Shanghai-based offering, I flew to Xiamen, a tropical island in the south of China, for a whiskey tasting competition. The company that hosted the event makes its own gin, named Balang after a surfing beach in the area.

As a Florida girl at heart, I was attracted to its desire to convey the “relaxed attitude and natural atmosphere of the Fujian seaside” (from a translated form of its promotional materials. Fujian houses the province that contains Xiamen as well as other seaside areas). I was excited to try its own unique combination of ingredients that honor its Chinese origin. Balang’s flagship gin, Eight Waves, is double-distilled and uses local-sourced juniper berries, coriander, cumin, cinnamon, and angelica, as well as a citrus note not present in Peddlers—at least, not in the same way.

Now, to see how the two compare! I’m still terrible at identifying discrete flavors, so I asked the talented bartender and entrepreneur who first introduced me to gin, Fang Bing, to share his own notes on these two. Having been professionally trained, he is more adept at picking up flavors than I am, although I will do my best. 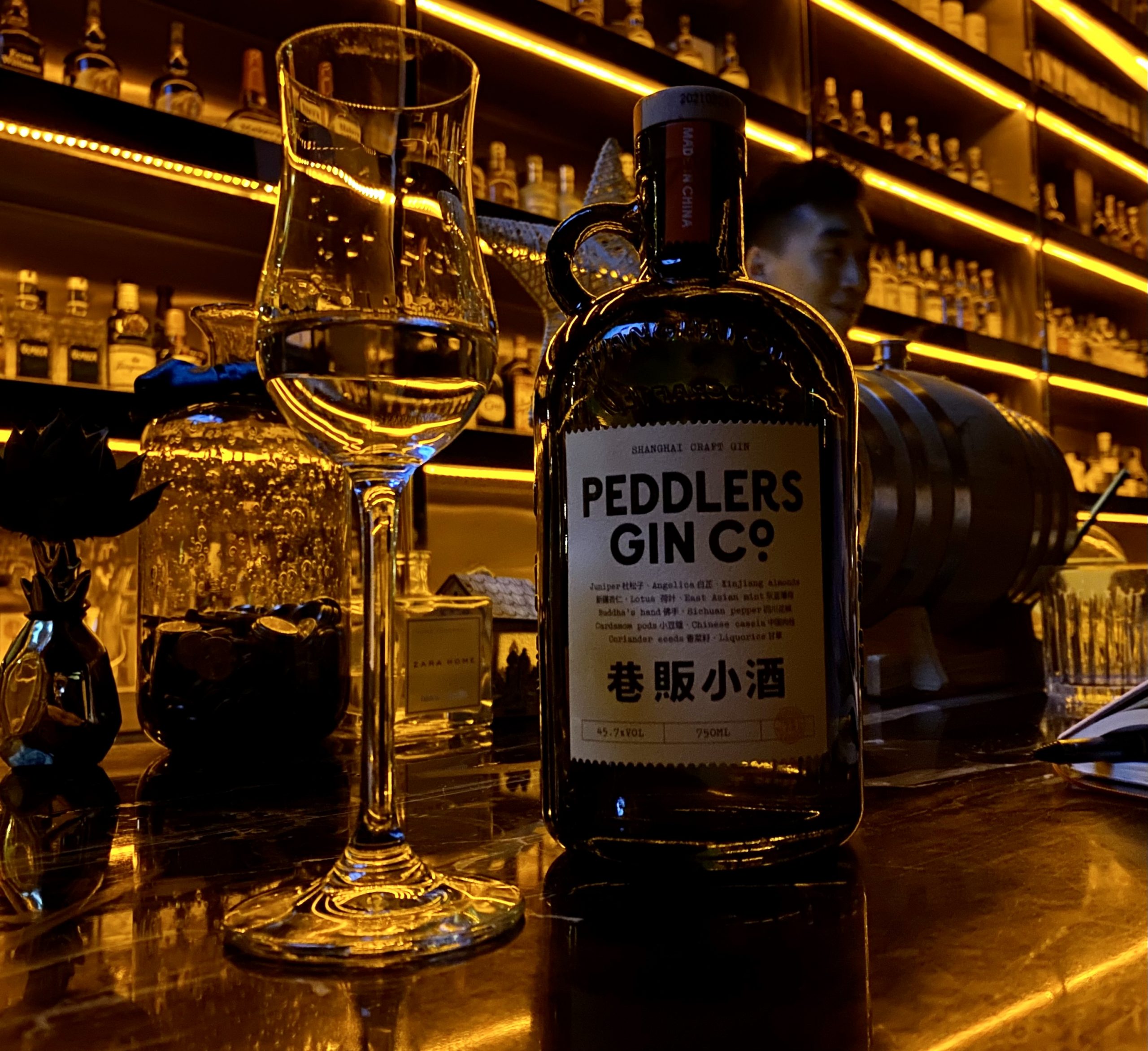 Bing’s notes: Fragrant notes of lotus leaf remind me of childhood, when I’d take the lotus leaves down and roll them along in my fingers with the dew still inside. This is the scent that comes first, followed by a flavor of spice, cinnamon and anise that reminds me of youtiao, a deep-fried breadstick eaten for breakfast in China. It’s akin to Mexican churros.

Abby’s notes: Very hot, almost like the paint thinner I used to drink illegally that passed for liquor in Kuwait, and resembles whiskey heads… but maybe I’m just used to the scents of aged alcohols. Hints of licorice, Buddha’s hands (similar to lemon blossom zest) and lotus leaf.

Company description: “Resinous juniper…with earthy flavors of angelica, cinnamon and [licorice]…followed by citrus and pepper notes filling the mouth. Mellowing into warmer honey tastes of coriander seeds and Xinjiang almonds.” For the finish, “oils from juniper, coriander and almonds eventually give way to a pleasant, lingering warm mouthfeel from mala spice and cubeb berries.”

Bing’s notes: Delicate and cool, as if a sugary mint were ensconced in herbs, with a relatively short finish.

Abby’s notes: That Sichuan pepper is incredibly subtle, but brightens the flavor as compared to gins like Tanqueray. Combined with the zing of the Buddha’s hand, it tastes juicy and delicious. As Bing noted, the finish is short.

Abby:  7/10. Powerful, punchy and good to drink on its own, but also makes for incredible cocktails. 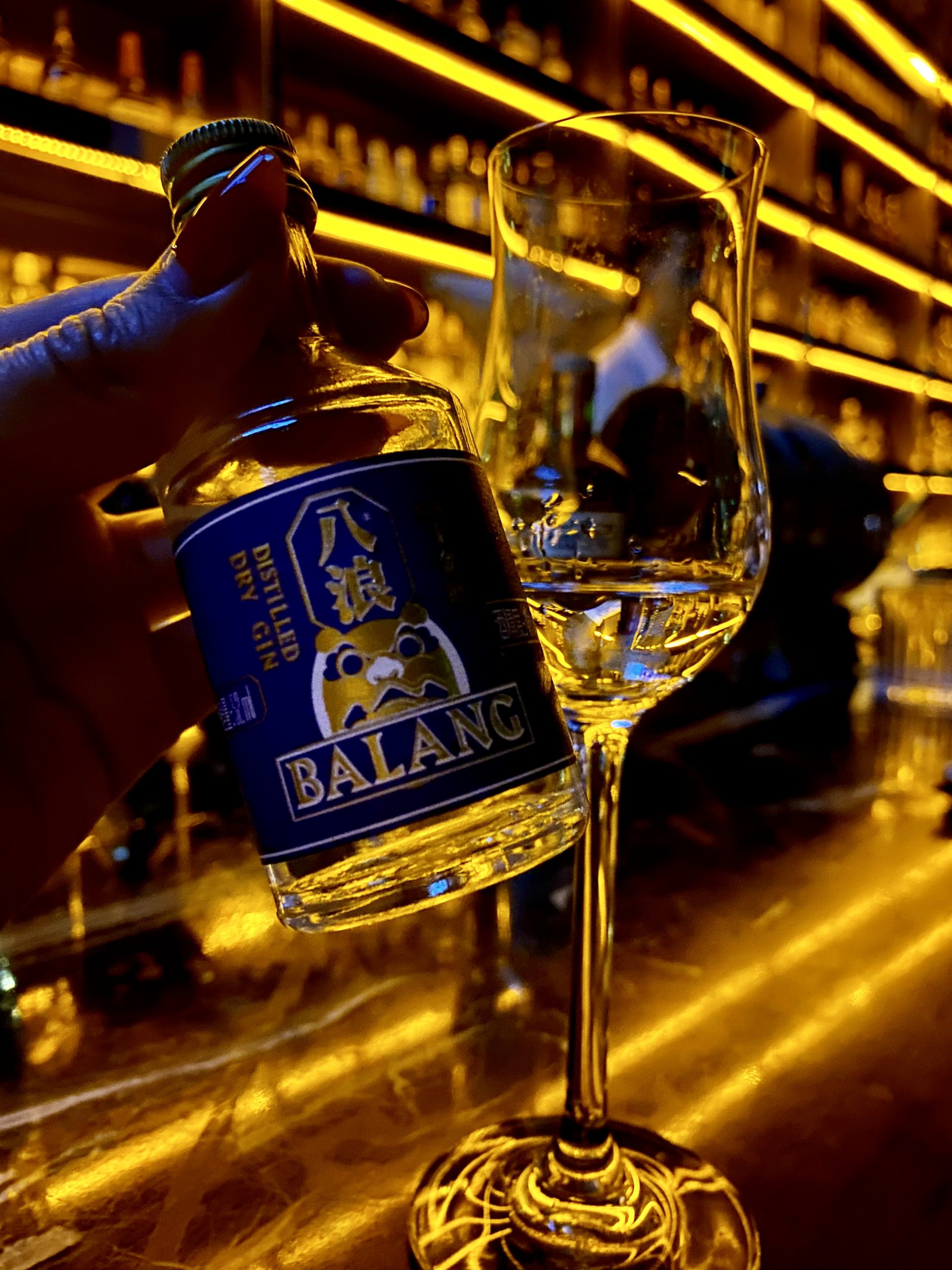 Bing: Citrus aroma dominates, followed by the faint scent of herbs used in traditional Chinese medicine, as well as licorice and angelica. These scents last a long time.

Abby: Citrus and flowers. It’s so light compared to the Peddlers as to be effervescent, but the airy scent stays around awhile. A slightly sharp note of minty licorice(?).

Bing: Strong and smooth taste with a beautifully-harmonized fennel and almond flavor that lingers for a long time.

Abby: Citrus comes through strongly, not underlain with much else that I can confidently identify. A bit hot, but still enjoyable to drink.

Abby: 6/10. Not as much depth or punch as the Peddlers, but strong, flavorful and worth drinking neat in its own right. I am amazed at what they’ve come up with in just a few years. 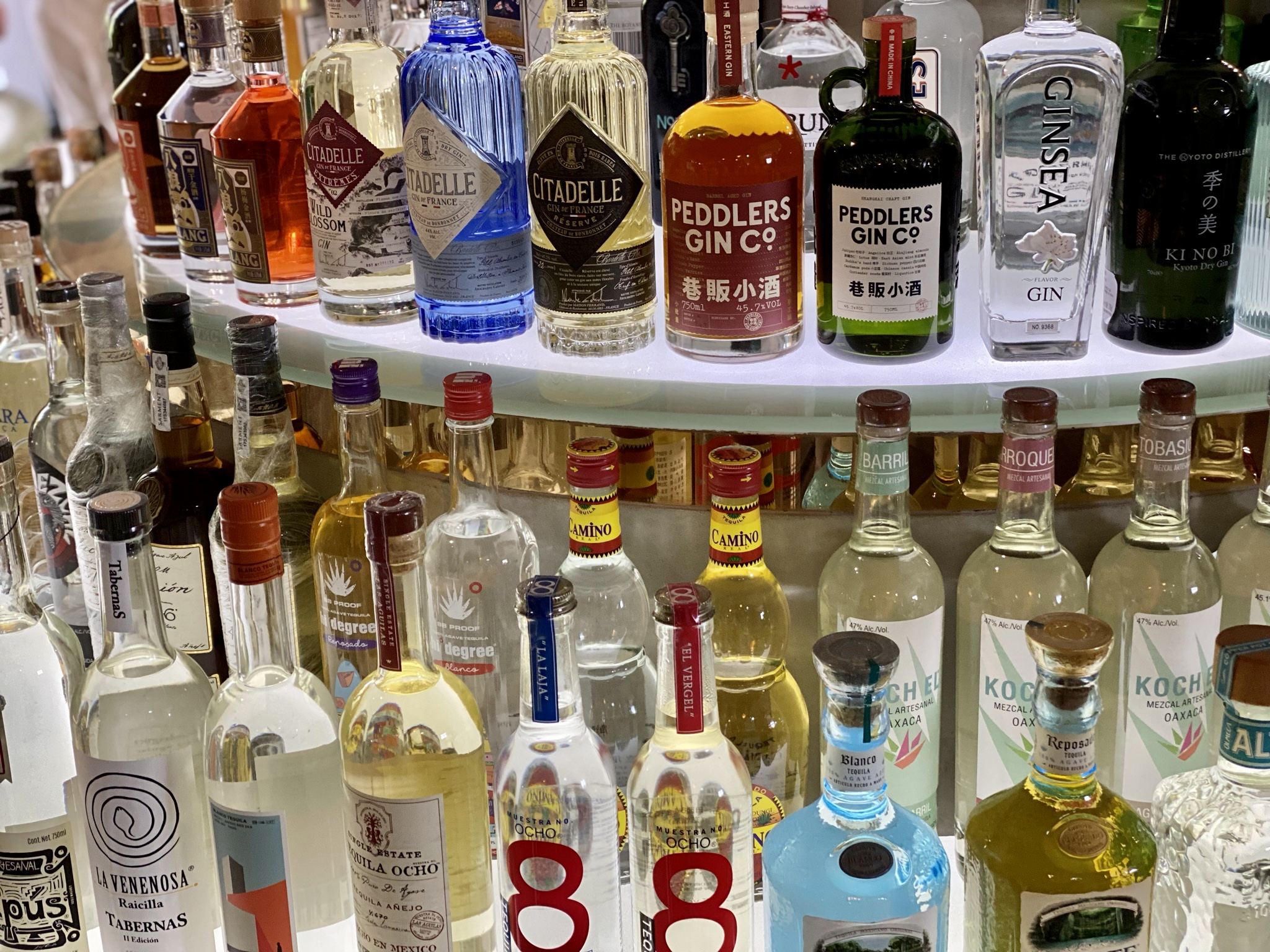 The big difference in scores aside, I think the overall tone is pretty clear. Peddlers Rare Shanghai Gin is bolder and more flavorful, while Balang is a touch hot but lighter in tone. When asked which gin would serve as a better introduction to Chinese gin, Bing recommended the Balang, as it’s simpler and more straightforward. I’d recommend the Peddlers because its bold, complex flavor is what I enjoy, but it may also depend on what you enjoy in your regular gin, or other drinks.

Since I respect Bing’s opinions, his high score of the Balang made me do a second tasting. The first time, Balang seemed, frankly, weak, as its more floral, citrusy tone appeared forgettable. After hearing his take and sipping both pours again, I will say that I prefer the nose on the Balang to Peddlers, but remain steadfast in my adoration of the latter. Perhaps it’s the American in me: we do enjoy an aggressive flavor. On the other hand, only Canadians can try it for now. Let your American friends know what you think!