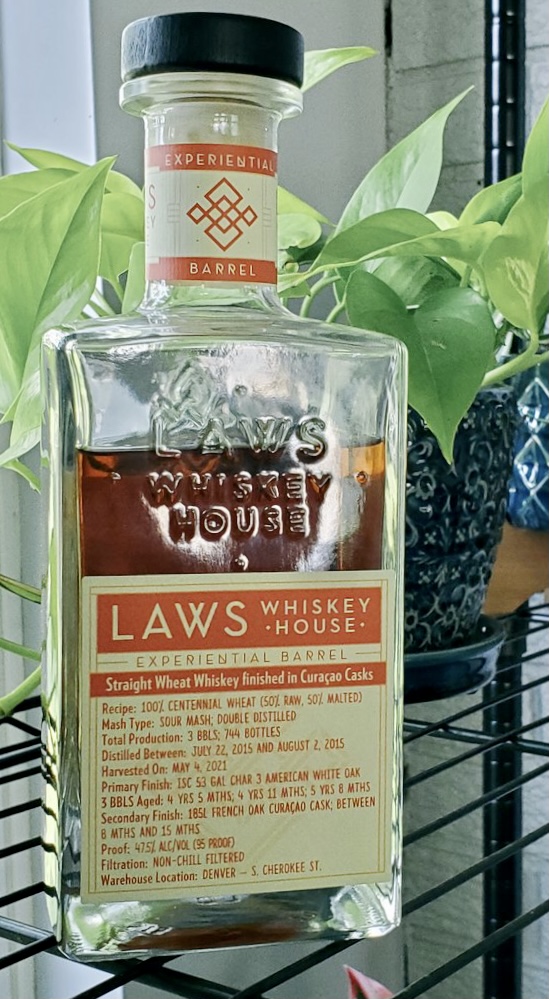 One of my favorite types of bourbon is the wheated variety.

“Wheated bourbon” means the distillery uses wheat as the secondary grain (or “small grain”) instead of rye or another grain. This is a popular bourbon variety due to the wheat imparting more sweetness to the final product, and not spicy qualities associated with rye that some find abrasive. Maker’s Mark is one of the cornerstones of wheated bourbon.

Curiously, I found this Laws Whiskey House wheat whiskey searching online for something that I have not experienced yet. Reading some reviews of Laws Whiskey House, I decided to dive into their product line and see if anything looked interesting. What caught my eye was a wheat whiskey. That’s right: whiskey, not bourbon. It piqued my curiosity because I have not had a completely wheat whiskey before. Furthermore, this whiskey is finished in a curaçao barrel.

When I saw the curaçao finish, I immediately thought of the neon blue, super sugary, abrasively orange-flavored stuff sitting in bars. Turns out curaçao is originally from the Dutch island of Curaçao. It’s a liqueur that is traditionally made with the dried peels of the lahara orange. That’s an orange native to the area; it is completely, bitterly inedible. The peels are pleasantly aromatic and are used for the aromatic oils. The liqueur is made by soaking the lahara in alcohol and water for several days, then the peel is removed and put into a burlap sack. Spices are added and then the bag is hung and heated in a copper pot still and kosher alcohol is added and soaked for 3 more days.  After one day of cooling, water is added, and the resulting liquid is distilled. The liqueur is orange-like in flavor, with varying degrees of bitterness.  It is naturally colorless but nowadays coloring is added, blue and orange being most popular.

I’ve always been curious about finished whiskeys. This is my first dive into something that is aged in a curaçao cask. I’d say I’m a fan of orange flavor, but never had it as a driving note within a whiskey. I’ve gotten this flavor in rye and find it pleasant but – with this being a wheat whiskey – I’m hoping that it will not overwhelm the spirit. Wheat as a primary grain (or in this case, sole) is not something I’ve had in a whiskey. Wheat is something I feel accentuates a bourbon, adding subtle sweetness and plays a great supporting role.

Taylor has done an in-depth dive into the Laws Whiskey house. I reached out to them for some clarification on this release and the response was as follows.

“We first released a Centennial Wheat Whiskey finished in Curaçao casks in spring of 2019. This release consisted of 2 casks which didn’t last long.

The 2021 release comes with a few extra twists. The biggest difference this year was using older wheat whiskey that spent varied time in Curaçao finishing casks which we then bridged with an even older super-rich wheat whiskey from our racks. This added some extra layers of flavor and a deep complexity.

This year’s release is made up of three barrels of well-aged Centennial wheat whiskey. Two of these barrels spent 8 months and 15 months respectively in toasted French oak barrels that were previously used for aging Curaçao. The third barrel of Centennial Wheat Whiskey was hand selected from our older stock near 6 years in age for its rich wheat character.

The grain being used here is 100% Centennial wheat making this a wheat whiskey, not a bourbon. Laws Whiskey house also provided additional information about the Centennial Wheat grain.

Our wheat supplier, Colorado Malting Company run by the Cody Family, grows this grain in the San Luis Valley of Southern Colorado. The Codys share the Laws Whiskey House focus on quality and creating a product made without shortcuts. They focus on heritage and heirloom grains that match our grain to glass production philosophy

The Cody’s both grow grain and malt it, meaning we get some of the freshest raw and malted grains possible. Most farmers grow “hard red wheat” because of the elevated protein content desired for making bread. However, lower protein is better for distilling and for this reason we use 100% “soft wheat.

The whiskey is the product of a sour mash fermentation, double-distilled, with three total barrels comprising the batch. Bottling strength is 95 proof (47.5% ABV); the whiskey is non-chill filtered. I found this on the Laws Whiskey house’s website for purchase at $76.

With that being said, let’s get into a glass!

On the nose: Cascading waves of orange and orange peel present immediately. There is a slight lemongrass and fennel aroma intermingled with a toasted wheat bread that is smothered with orange marmalade and honey. It keeps inviting more sniffing, as vanilla oak shows up melding this into a lovely orange Dreamsicle-type note. The alcohol is not abrasive; it almost presents itself as a liqueur rather than whiskey, with its abundance of sweetness. Digging deeper, some cinnamon can be found, resembling the Red Hots candy more than a baking spice. As this sits in the glass a lovely, toasted marshmallow dances between the orange notes to add just a bit more character and nuance.

In the mouth: The orange notes are carried to the lips almost immediately, like candied orange peel. Dense marmalade intermingles with pepper to create a playful sweet and spicy note.  More fruit comes forward on the front of the palate, with apricot and plums coming to the party. This reminds me of wheat toast with butter spread on top as the grain presents itself. The lower proof shows up here as the mouthfeel is somewhat thin. On the finish, oak rounds this out with a medium finish that is slightly tannic, offsetting the overall sweetness.

This is a fun experiment as my first dive into a 100% wheat whiskey. I found that the wheat as a sole grain does not really impart a ton of flavor components. I now am beginning to understand why its use as a secondary grain is important due to the sweet and bread-like notes it can impart. I think that the Curaçao cask finishing added a lovely orange abundance to this whiskey. If you like orange, this would be something to try. This whiskey smacks of summer and am glad I had a chance to experience it in season.

I can see myself drinking this as an after dinner pour or a dessert whiskey and would be completely happy with it. My only knocking point is the somewhat hefty price. I will deduct a point for that and have adjusted my score accordingly, also based on availability.