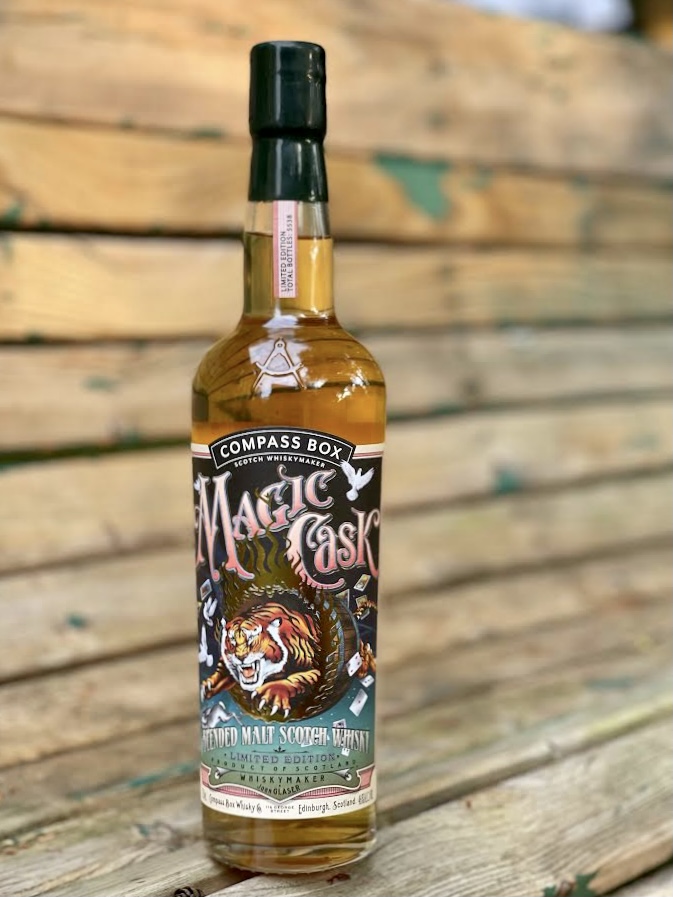 There are few foods in the world that are best all on their own. A spoonful of honey? A raw oyster? The incredible edible egg? Most foods need help from others to really shine. It may need something simple like a pinch of salt or a complicated sauce. There are countless ways to mix and match food to create something tasty.

This is one of the reasons I have always liked blends. They are an attempt to make something new out of parts already known. As a drinker who enjoys Scotch for its variety, I’m always happy to see the spectrum of styles widen. When you look at a breakdown of a blend on a tech sheet you can usually see the approach of the blender. There are blends with many components, all in tiny proportion that, if done well, harmonize like an orchestra. This is the hardest needle to thread, but you can see some great examples of this out of Japan.

Then, there are blends with fewer components, so each part plays a bigger role in the final product, but none are the star; instead, it’s an ensemble. Lastly, there is the blend that isn’t seen as much, one made from mostly one whisky with another component or two to round it out. Think of it as a diva with an accompaniment. This is the style of blend we’ll be looking at today.

I imagine this kind of blend isn’t seen much because it isn’t very repeatable. Most blends are created to bottle a consistent whisky over and over again. “Divas” don’t come around all that often, and when they do, they’re usually bottled all on their own. Yet, this is not the first time (nor do I imagine the last time) Compass Box has put together a “minimal” blend like this. They’ve also made a few iterations of the Double Single: A blend of a single malt and single grain. Creating a whisky that’s like a duet.

I haven’t picked up a new blend from Compass Box in a long time. In the early days, they took a lot of my money, and I was happy to give it. Their standard blends and limited releases were different, but most importantly, satisfying. Though like most good things, it couldn’t last. Time marched on, and their new limited releases got more expensive while the quality didn’t necessarily follow suit. So the company’s latest releases soon fell off my radar.

However, when I saw what was in the Magic Cask blend, I threw caution to the wind and got a bottle. The blend is comprised of 92% 24-year-old Imperial aged in a first fill ex-bourbon barrel and 8% of a 3 year old single malt (from a distillery near the town of Aberlour) that had been racked into a first fill Oloroso sherry butt.

In fact, I have Compass Box to thank for introducing me to Imperial. (Compass Box, if you’re reading this: cheers!) I first tried it in a limited release called Rivals, a blend made mostly of Macallan, but there was a unique character I couldn’t trace. I attributed it to the Imperial. So, naturally, I wanted to try more.

I think most whisky geeks have a particular ghost distillery they like to chase. The ones that seem to get the most attention are Port Ellen and Brora. While I wouldn’t refuse a splash of either, these days, I prefer to keep my eye out for Imperial. The distillery was officially closed in 2000 and demolished in 2013. Now, the newly built Dalmunach distillery stands in its place. Even when Imperial was standing, it was often out of production. When it was making whisky, a lot of the juice went into Chivas’ blends. So, I can see why it might not have garnered much attention. That said, the few (independent) bottles of Imperial I’ve gotten my hands on have always been such treats.

On the nose: Right off, there’s the smell of candle wax that’s mingled with vanilla. From there things get busy and a little muddled. The fragrance shifts to the delicate aromas of pear and apple skins. A waft of something gamey like new leather. This finishes with a rich sweetness that reminds me of cake fondant which, after everything else, seems a bit left field. None of these aromas are particularly “loud,” if anything, they’re coy.

In the mouth: The texture starts out creamy, though towards the end it thins out and becomes watery. The wood notes show most prominently: char, vanilla, sweet spices, and wood smoke. Then there’s softer fruit notes to savor, fresh white stone fruit, pear drops, and yellow plums. Lastly, a finish of bold dry spices.

I don’t know what the parcel of Imperial was like before it was blended, but the whole time I was sampling this I kept asking,

“How has the younger whisky helped this?”

Blending young and old whisky can be great. Sometimes the aromas and flavors of old whisky (or old spirits in general) can come across as “tired.” A younger component can give the final product some verve and raise the pulse of the overall experience. However, in this blend, the young whisky from (Aberlour, Craigellechie, Macallan…whoever) seems to be floundering in the Imperial, rather than enhancing it.

Perhaps it would have been better if more of the young whisky was added. What if the younger whisky was a bit older? Would its contribution have been more defined? I think bottling the whisky at a higher proof might have held the texture together better and emboldened the flavors found on the palate. There were a lot of “what if’s” swirling around my mind when I was staring at my empty glass.

I waffled on the score for this for a while, because the whisky is good, but certainly not worth the high price. Even with most whiskies getting more expensive these days, there are still lots of other whiskies you can get for $200 or less that are more cohesive and satisfying.

Compass Box The Story of the Spaniard