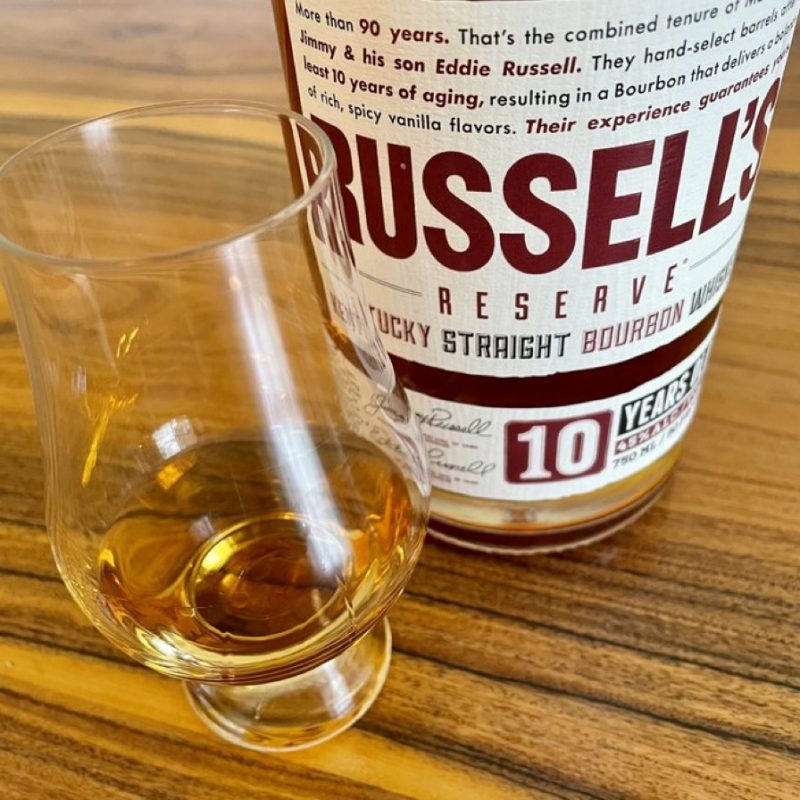 I have so many plans…

The scope of my ambition, however, often overwhelms my ability to execute. For example: I have six samples of Kentucky Peerless barrel picks sitting in my basement, next to the dozen bottles of various Maker’s Mark expressions that I am saving for the tasting-to-end-all-tastings. The weight of these tasks creates a type of paralysis; it’s like having writer’s block in applied form.

I tell all our writers here that they should write only when they feel inclined to do so. This is advice that one of our former editors gave consistently, and I have maintained the practice. From our readers’ perspective: it’s easy to tell when a writer has passion for a subject. The prose flows energetically, the writer’s personality shines through, and the tasting notes are rich and varied.

On the other hand, it’s also readily apparent when there’s a lack of enthusiasm. I’m not talking about the weary, cynical takes that (for better or worse) have become a part of the Malt “brand;” even those can be full of strong feelings, albeit of the negative variety. Rather, I’m referring to the reviews undertaken due to a sense of obligation or boredom, perhaps for lack of other material available. I’m guilty of producing a few of these myself, though I’m hoping that today’s will be more inspired, as it is motivated by several topics that I feel strongly about addressing.

The story begins with me gazing on the assembled bottles and samples that I intend to review mañana, which is what our friends south of the border say when they actually mean “never.” I noticed an orphan sample sitting to the side. It’s a whiskey that is available everywhere I shop, and I do mean everywhere: grocery stores, liquor stores, even the dang drug store (in an amusing nod to bourbon’s historical medicinal use). Nothing about this whiskey inspires frenzied hunting, paying a secondary market premium, or bragging about securing a bottle on Instagram… and you know what? That’s how I like my bourbon, nowadays.

For years, this hobby has been taking a series of turns for the worse. I have documented many of them on this site; it would be hard to find one of my bourbon reviews here that didn’t bemoan one of the depressing trends that mar my enjoyment of this beverage. Because, after all, that’s what this is: a beverage.

You wouldn’t know it, though, based on the behavior of some. While I celebrated passion just a moment ago, it can be taken to an irrational, corrosive extreme once perspective has been lost. However, I strongly believe that behavior is normative. We’re social animals, and all but the most deviant of us take our cues from those around us. We look at what other people are doing, and we act likewise. We pay attention to what types of conduct get positive reinforcement, and we also notice what gets criticized and condemned. If we want to change the antisocial, criminal, and occasionally violent actions of those in this community, it’s not enough to simply scoff privately at bad actors or kvetch about them online. We also need to hold up examples of outstanding behavior and be generous in our praise of the good guys.

One such good guy is the inspiration for this piece. I’ve sung his praises in this space before, but he keeps on giving, so I keep on singing. I’m referring, of course, to David Jennings, a.k.a. Rare Bird 101. He has appeared so frequently here that he probably requires no introduction, other than to say that he has literally written the book on Wild Turkey, and remains the distillery’s #1 fan bar none.

In my recent survey of Kentucky whiskey distilleries, I lauded the core range of Wild Turkey. However, looking back on my reviews on this site, I have stuck mostly to the limited-edition releases. Because of the high prices these bottles command, the ones that failed to resonate with me were given relatively punitive scores. In turn, this has resulted in the perception that I don’t like Wild Turkey.

I won’t recapitulate my defense; rather, I’ll put words into action by reviewing a member of the aforementioned core that I think deserves the attention of all bourbon drinkers. The bourbon in question is the Russell’s Reserve 10 Years Old.

You can read David’s thoughts on bottles of this expression from 2019, 2020, and 2021, the latter including an informative chat about the expression with Wild Turkey’s Master Distiller, Eddie Russell. John also gave his verdict on the pour, in a head-to-head matchup with another decade-old bourbon.

This bottle is from 2018, which means the distillate came from the old Ripy Bros. distillery, rebuilt after the end of Prohibition (the new Wild Turkey distillery commenced production in 2011). Though older barrels are (and will continue to be) blended into the release, those purchasing Russell’s Reserve 10 Years Old bottled prior to 2021 will be assured that the liquid is 100% from the old distillery.

Let’s pause to think about this for a moment: it’s the year 2021. You’ve got a whiskey distilled by a living legend (Jimmy Russell) and his son, then-Associate Master Distiller (Eddie Russell), at a shuttered distillery. It carries a double-digit age statement. Can you imagine what a bottle of Stitzel-Weller, Brora, Glen Mhor, Hanyu, Elkhorn Forks, or Karuizawa with these specifications would cost you, in this day and age?

What if I told you $35? That’s the price of this expression, and bottles are just sitting there on the shelf, ready for you to take home. It’s so hard to believe, I actually poked fun at it with this meme I shared on Twitter recently: 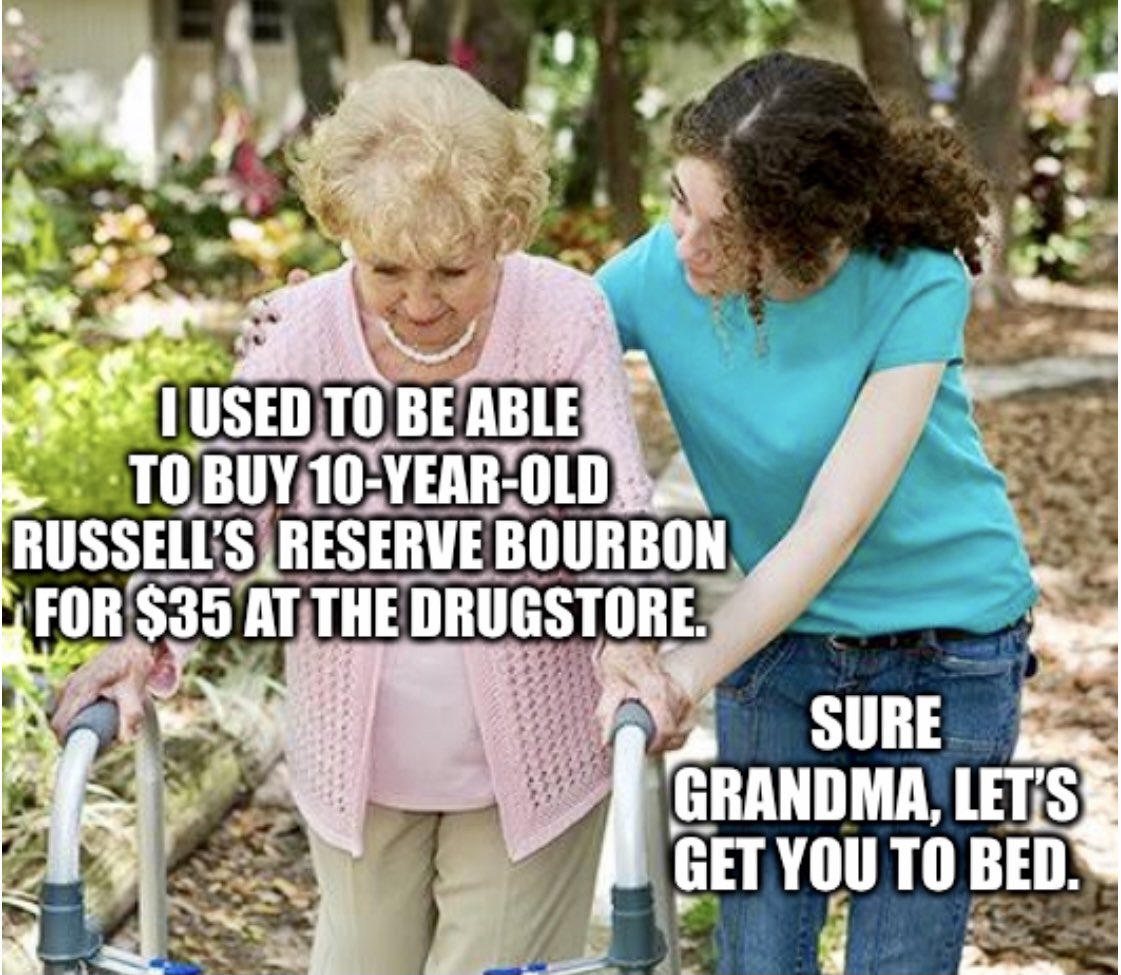 I’m almost afraid to point this out too frequently, for fear of inciting some of the already-discussed bad behavior. But I can trust you guys, right?

Before I get tasting, some specifics: This comes to us at 90 proof (45% ABV). You can find it almost everywhere, for the time being, at the previously stated price of $35. Per my prior comments, this was a sample provided by David, who remains a dear friend to me and this site.

With a hearty “Cheers!” to him – and all the rest of the folks in this hobby carrying the torch for being reasonable, patient, kind, and generous – let’s tuck in.

On the nose: The nose has a delicacy that encompasses gentle floral, fruit, stone, and “dark” aromas. There’s a fresh springtime bouquet that melds seamlessly with some cheery scents of cherry candy. A counterpoint in the form of a mineralic whiff of limestone yields to some more brooding smells of leather, tobacco, forest floor, and tar.

In the mouth: The first impression is a sweet one, with the freshly floral aspects of the nose joining in with light sugary confectionery flavors. This becomes more austere in the middle of the mouth, where a drying chalkiness dominates for a moment before a re-emergence of richer flavors of candied fruit. There’s a hint of new leather as this transitions into the finish, where a tingly spicy heat and a lingering stoniness persist long after the final swallow.

The nose is complex and exceedingly well-balanced, with a diversity of aromas that nonetheless knit together in a complementary way to present a cogent whole. The palate is a bit more segmented, but each of the elements is well-defined, and the progression remains orderly and balanced. Though this style requires some concentration to appreciate fully, I don’t get the sense that there’s much loss of flavor due to dilution down to 45%. In total, very good whiskey worth every buck of the asking price, with lots of room to spare.

Some of our readers might have felt like I was repeating myself in the preamble, and that’s because I was, intentionally so. It’s not enough to go “on the record” by saying or writing something once, patting myself on the back, and then proceeding on my merry way.

I truly believe that we all have the ability to change the way people around us relate to whiskey. It’s going to require actively and consistently affirming standards of noble and ignoble conduct. It’s going to take time and patience. It’s going to be frustrating to the point of feeling futile, and the temptation to just throw up our hands and opt-out will be a regular one.

We can’t quit so long as the Instagram influencers and bottle flippers aren’t quitting either. I’m endeavoring every day to promote constructively critical engagement, and to encourage people to choose right over wrong, generosity over selfishness, and principle over profit. I’m not going to be perfect at it, and I’ll certainly lose more than I’ll win, but I’m going to keep at it.

To revisit my prior comment: whiskey is just a beverage, but it’s also a beverage that has the power to gather people together and to bring out the best in them. In that way, the “bourbon culture” – or whatever you want to call it – is worth defending, protecting, and improving. I hope I can count on your help.