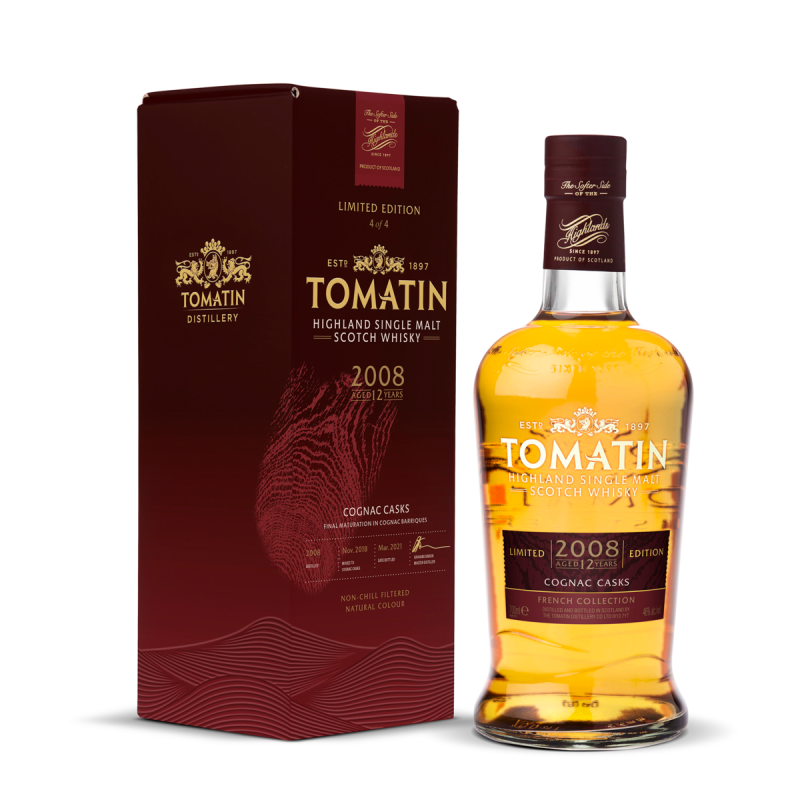 All are fermented to convert sugar to alcohol. The fermented liquor is then distilled in pot stills. All are aged in wooden barrels, and often the longer they are in the barrel the more gentle and sophisticated the taste becomes. Naturally, each will have a point where the wood begins to dominate the spirit, too. All three have a bit of a stuffy image and are a hard sell to youngsters.

Cognac and brandy differ in that they are grape-based rather than whisky, which is grain-based. As for the difference between cognac and brandy? Well, all Cognac is brandy but not all brandy is Cognac. That is because – like Scotch – there is a protected designation of origin (Controlled Appellation of Origin or AOC) that anchors Cognac in the geographical region of France, whereas brandy can be produced anywhere. Scotch must be fermented, distilled, aged and bottled in Scotland, actual whisky can come from anywhere in the world. 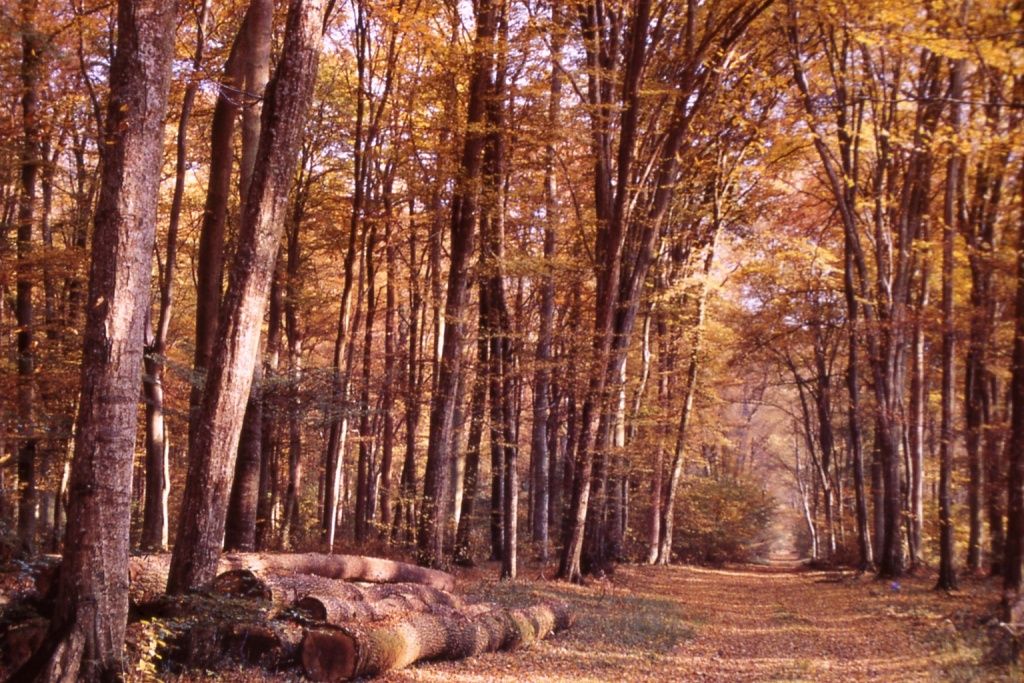 Cognac barrels initially use new highly active French oak, which makes oak selection a critical aspect of each producer’s approach to the finished spirit. The most abundant oaks are the Pedunculate Oak (Quercus robur) and the Sessile Oak (Qeurcus pentraea). Hennessey extols Limousin oak for the “rich and creamy vanilla character” it imparts in their spirit, but Limousin is a forested region where both oaks grow, so that does not indicate a preference for either species.

Barrels are toasted and charred by naked flame at the cooperage. Barrels are reused, much like in Scotch, to provide blenders with various flavour profiles. “Futs-roux” is the term for refills. Cognac can be filled into casks which have had almost all the flavour removed from the wood, to allow for much greater ageing.

As with a whisky cask, the alcohol will act as a solvent to extract wood components such as tannins and vanillin from the staves. This will impart the amber colour which will vary from a deep dark hue to a light golden shade, depending on the oak and how often the cask has been filled. The angels will take their share, and the remaining chemical components will gradually oxidise. This is all very similar to the interactions of whisky with wood.

Cognac casks have been used occasionally in Scotch maturation over the last 50 years, including a Glenfarclas 43 year old, some interesting releases from Bruichladdich where Cognac casks have been used for peated and unpeated spirit, and Arran releases. It is becoming much more of a trendy proposition these days as the stuffy old world of Scotch begins to open up to a bit more experimentation. Cognac casks seem entirely pedestrian in the face of tequila and mezcal casks.

I like the idea of Cognac finished whiskies; it’s a traditional method of maturation harking back to the trading days between Scotland and France prior to the Union of the Crowns, and reflecting the Auld Alliance between Scotland and France against England. This is of course “tourist history,” because the Auld Alliance was in the 12th century long before the recorded existence of Scotch whisky or Cognac. Distilling, however, was no doubt on going in both countries in some form or another around the time of the Franco-Scot win at the Battle of Agincourt. 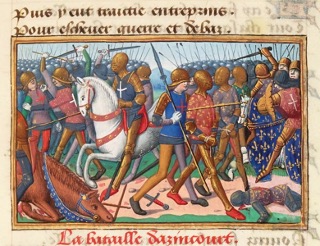 Paring back the myths: scientifically brandy and Cognac – and I suppose rum – interact with the wood much like Scotch and take much more from the wood than the fortified wines that have become commonplace casks to use for maturing Scotch. If the Cognac cask is no longer useful to a producer it will have been used to depletion, like a fourth-fill whisky cask, so what benefit to the whisky?  As far as I can determine from the samples reviewed, no information about the casks is provided beyond stating that the casks are either brandy or Cognac casks. I’ve found rum casks very hit and miss, and wonder if casks maturing multiple spirits are harder to manage? Let’s dive into 4 different presentations of Cognac and brandy casks.

Starting with Tomatin; an interview with Scott Adamson from Tomatin detailing the whole French Collection and the finishing of casks can be found here. A sample of this dram was provided by Tomatin. 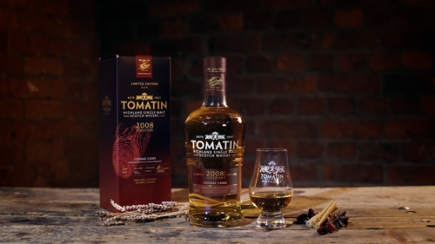 This was much better on my second tasting of the sample. I think a little extra air helped this open up more. I enjoy the slight tension between the Cognac elements and the Tomatin malt and there is definite depth to the flavour here. As with the other releases in this collection the nose is a little more alluring than the taste delivers but I still think you are getting great value for money at this price. This sample edges the others I reviewed but I think just falls short of a six.Up against similar cask strength whiskies I do think this would have benefitted from more ABV, but I understand the concept and approach Tomatin have taken. 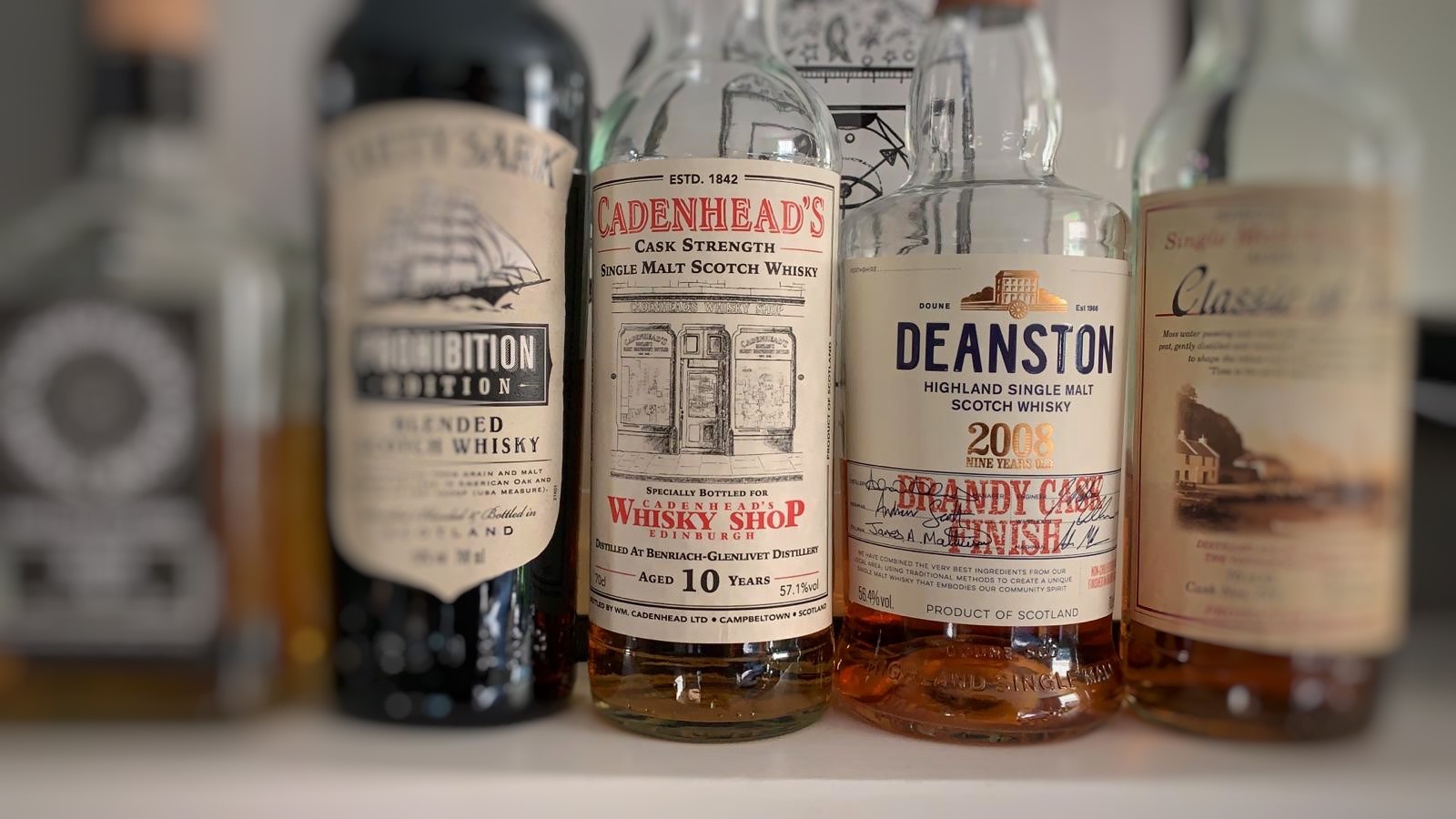 Just a bit too sweet for me, I can see that there is some influence from the cognac cask but not enough to save this dram, maybe one of these less active casks that has been well used before having whisky in or maybe the spirit needed more time. The price should be acknowledged as very fair and therefore…

On the nose: Rich and overly ripe fruit, lots of vanilla, poached pears, French polish, a hint of old leather, dusty and dry. This is quite closed without water.

In the mouth: Very much the most rich of all three so far and also smoothest. Very brandy forward, lots of wood spices and quite oaky, furniture polish, mahogany, muscovado sugar, maybe too much brandy here? A sopping wet cask before being filled? The brandy does fall away to a more malty but bitter finish.

Distell always go for huge flavour, and they have delivered here, but it’s not at all balanced and the tension between malt and grape I noticed in the Tomatin are ramped up here at cask strength and it’s not quite right, it does not edge these other drams enough and at £55 in 2018 that seems pricy so a fair score is… 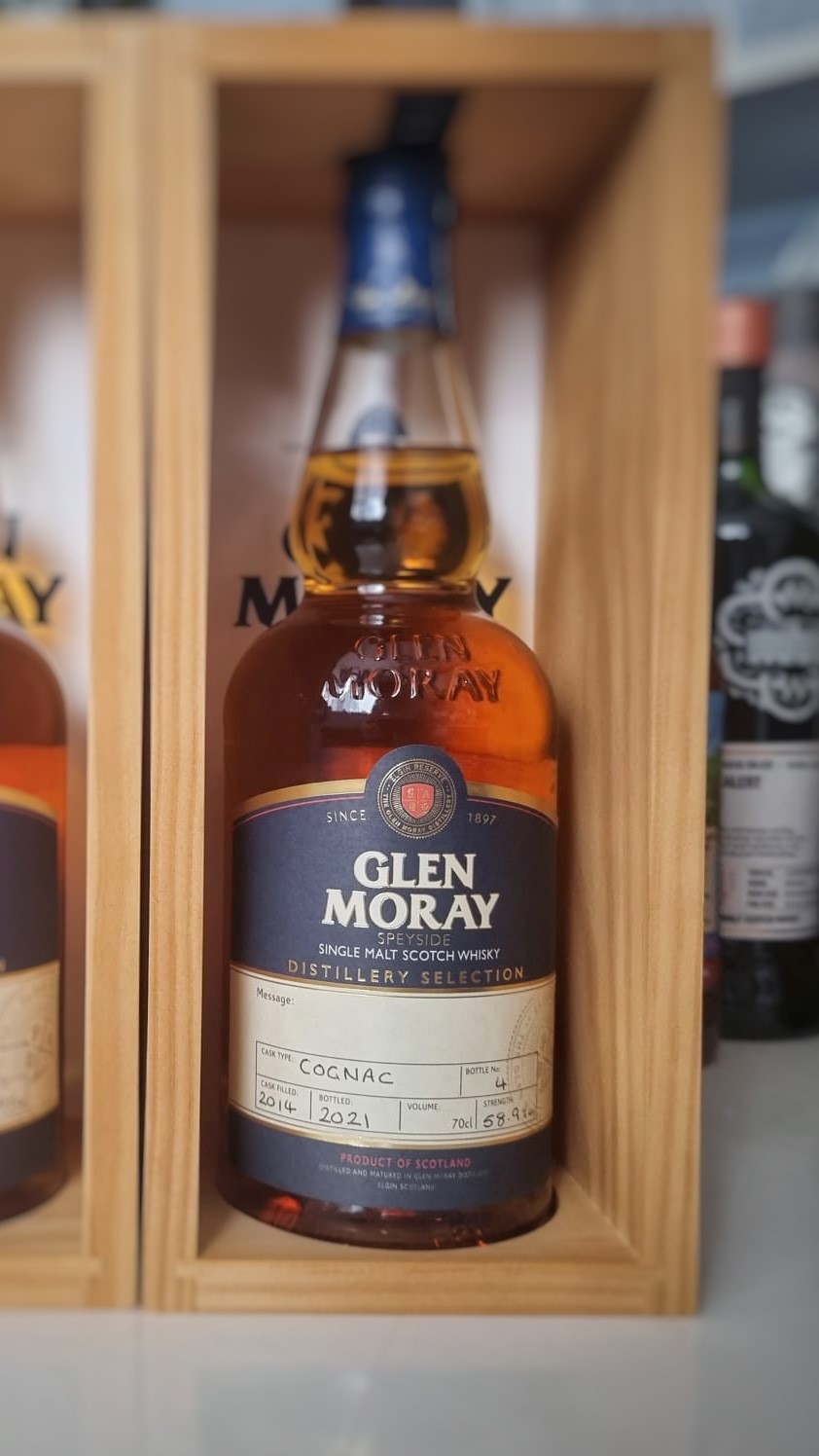 On the nose: Cognac!  A big brandy blast. Not much else even with liberal water.

In the mouth: This was more interesting but needed plenty of water to get over the spirit-y heat, some nice nutty and toasted sugar notes, very sweet at the front of the mouth whilst also being quite bitter at the back of the tongue, A real complexity that wills the drinker to roll the whisky over their tongue. Fruity and quite floral, light spirit that is typical of Glen Moray lots of lovely French oak spices, with vanilla, nutmeg, all spice all dancing around. Nutty on the finish, walnut.

An absolute surprise from Glen Moray. The distillery selection casks are often interesting, experimental, and very well priced. This is a real success. Yes, the nose on each of the other three better than this, but the taste is delightful and as a whisky drinker that’s the way round I prefer it. I would absolutely buy a bottle of this.

Overall, I think that using brandy casks for whisky maturation is going to require a bit more finessing to determine the best balance with each individual distillery spirit type. I think the base spirit needs to have been well matured before being finished or get longer in the cask than with a fortified wine. It is interesting that the full maturation works best here. There are added complexities of wood going on and as such I would try before you buy where possible. 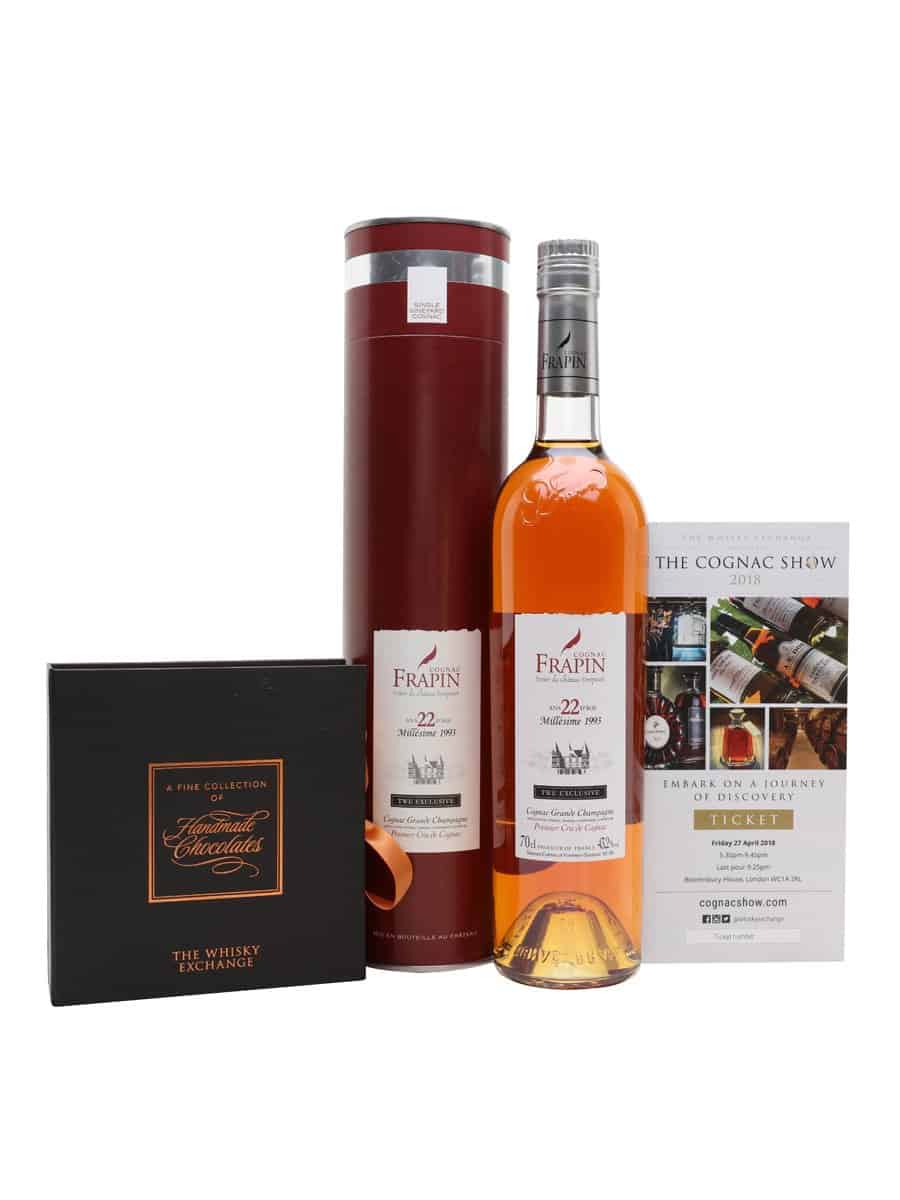 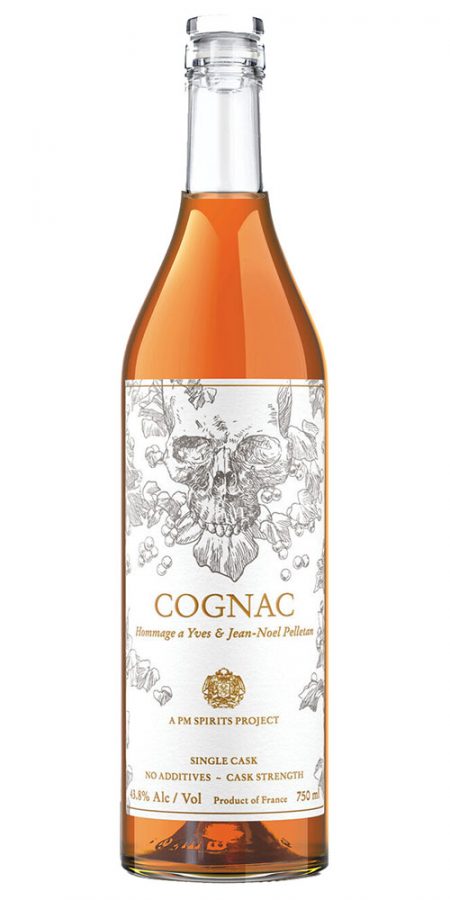