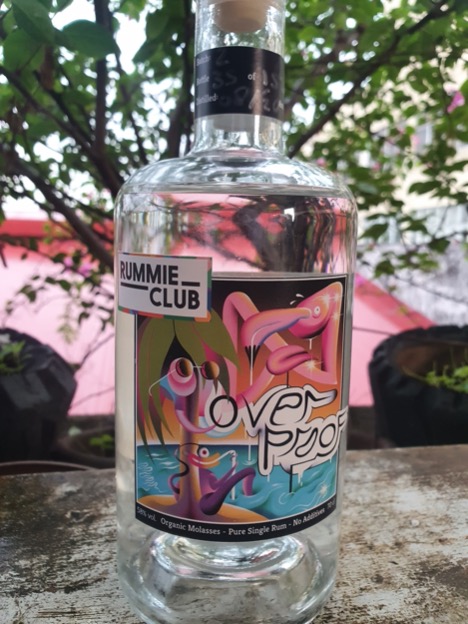 There’s a certain oddity in the fact that one of the most important players in the rum world is based in Amsterdam.

If you haven’t heard of E&A Scheer, they’re basically like the MGP of the rum world, except that they’re at least three centuries old and they only source & blend sugarcane spirits. On one hand, it’s weird because the Netherlands don’t produce sugarcane. On the other hand, it also kind of makes sense due to history. The Dutch traveled the world in search of spices. Along the way, they found and brought back Batavia Arrack to Europe, and they also responsible for bringing sugarcane to Barbados.

With that oddity and history comes a surprise. As far as I know, there is only one rum-focused distillery in Amsterdam—perhaps even in the whole of the Netherlands. That distillery is called Rummieclub. They’re very new; the company only started operating in December of 2019. It’s run and owned by Judith de Bie with her partner, Martjin Gerrits.

I am fortunate to have gotten to know her a bit through the rum community. Due to the extent of 2020’s lockdowns, she had time to spare to talk with us online. Using that connection, I asked her some questions regarding her rum and distillery. She was very generous with her time. 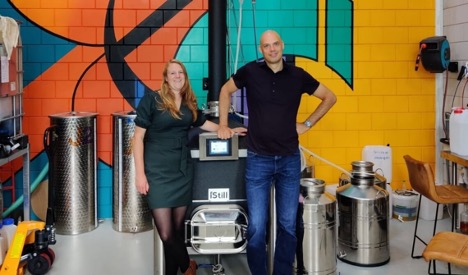 Malt: The story part of the website says you and your partner went through many things such as delays and selling your house for capital. Do you remember the exact moment when either of you really decided to start a rum distillery?

Judith: Around eight years ago we started as hobby distillers at home, and we always joked about starting a distillery. But it was the beginning of 2018 when we were talking in bed and deciding that we were really going to do it. We then sold our house in June 2018. We got the key to the distillery in December 2019 and started producing January 2020.

Malt: I, along with some of the geekiest members of the rum community, know you love rum. But since your rum is new, can you share what experience/s made you fall in love with rum? Just so the readers can get to know you a bit better.

Judith: As I’m not a beer or wine drinker, I was always interested in spirits, mostly as mixers, and rum has always been my favorite. During weekends we went to the liquor store on the corner of our street and tried new bottles. They had a big and great selection of rums and our palates evolved slowly over the years. I loved the diversity of rum; I could drink different rums for different moments, and it always worked. I thought I knew quite some rums when we decided to start the distillery, but I have to say that a whole new rum world opened up for us when we got in the (online) rum community. I wanted more people to learn about rum as we did. My favorite rum are currently ones from Saint Lucia, Guyana, Jamaica and Clairin.

Malt: Would you know if Rummieclub is the first rum-focused distillery in Amsterdam and in the Netherlands in a long time, or ever? How many other distilleries are there in Amsterdam?

Judith: As rum becomes more popular again, you see distilleries that were making other products now also try out rum as a new product. And then you also have the Spirited Union distillery, who take a gin approach to rum: they buy in the rum and then redistill or macerate with botanicals. As for a rum-focused distillery that makes it from scratch, we are indeed quite unique in the Netherlands. I’ve counted around seven distilleries in Amsterdam, mostly jenevers and liqueurs.

Malt: The website says you have three types of fermentation, and the shortest goes from four to five days. The most common one goes from six to eight days, and the longest one goes from 10-14 days. Does that mean you already have at least three marques? Do they already have names?

Judith: At this moment, we have quite some different marques; for our Overproof batches, we always use three: our basic marque, our backset marque and a wild yeast. So far we have experimented with wild yeasts from pear blossom, raspberries, tulips and sugar cane (from the frozen juice from Vietnam we have). We have been experimenting a lot the last one and a half years, and now we are evolving to have a few standard marques. But we will always keep experimenting; especially in summer because our wild yeasts are seasonal.

Judith: Backset marque means indeed we reuse the leftovers from the distillation in the next ferment, sometimes called dunder, sometimes backset.

Malt: The fermentation that lasts from four to five days is also interesting, as the site says you run it inside your Istill. Does that really mean that you ferment in the still? This is something I’ve never heard of before.

Malt: There’s also a mention of raspberry yeast. Are you open to sharing how you extract the yeast? And how do you apply the yeast to the wash?

Judith: Of course, yeasts are all around us, and they especially like fruits and flowers. For our raspberry yeast (which is always different from the next one), we harvest a handful of raspberries from our garden, then put them together with some beer wort in an erlenmeyer. We keep it there for a few weeks to see if it creates bubbles (CO2) so we know that it creates alcohol. The few weeks in an Erlenmeyer flask also kill unwanted stuff. After those few weeks, we add it to a five-liter bucket of molasses wash where the yeast can grow for another week before it is added to a 500-liter batch. The wild yeasts usually can only reach around 5.5% ABV, instead of the 9% we usually have, which means that the yields are usually quite low for these batches. But they are a lot of fun to ferment with.

Malt: How different is the Overproof batch 1 from batch 2? Are the differences just you trying to see what your customers like?

Judith: Overproof Batch 1 and Overproof Batch 2 are quite different from each other. Batch 1 is known for its bold and rummy flavours combined with a fruity nose and batch 2 is more funky (overripe papaya) and intense, but also more balanced, partly because we love experimenting and making different rums, certainly in the start of our distillery. Our base recipe for the Overproof editions is a combination of our base rum, dunder rum and a wild yeast, where we aim for a funky and exciting rum. As the wild yeast are always different, the batches will also be different. Though we are planning the next batches to be a bit closer to each other in flavour profile.

Malt: When do you think you’ll start bottling your aging rum?

Judith: We actually have planned the blending of our first official edition of aged rum for next week (end of August). We hope to be bottling it around November. We are quite excited for this, as the Netherlands has quite a small market for out-of-the-ordinary white rums, but more of a market for aged rums.

Malt:  I find the artwork on the label and website to be quirky and refreshing. Refreshing as in, it really moves away from the overused image of pirates. What’s the inspiration for the art?

Judith: For us, rum means diversity, and also relaxed and playful vibes. So we wanted our rum to be colourful and fun. We then asked several local graffiti artists to make artwork for our labels based on the products inside. The artist Mick la Rock made the artwork for our Colourful White edition, and it’s based on her interpretation of the bubbles and fumes of distillation. Munir de Vries made the artwork for our Overproof and was inspired by animals eating overripe fruits and getting drunk on them.

Malt: Lastly, where are your products currently available should readers want to buy your rum?

Judith: Our overproof is for sale at Richard Blesgraaf’s Zeewijck. In Denmark you can find us at Romdeluxe and in Belgium at Sabor Taste. This week we will also be signing the rental agreement for our own store in the center of Amsterdam, super exciting. So, from next year on, everybody is also very welcome in our shop where you can also bottle from our casks yourselves and can also find other amazing rums.

Thanks to Judith for her time. Now, to taste some rum!

On the nose: Funky, buttery and acidic. Up front are bold and lasting aromas of cane vinegar, shallots, sugarcane stalks, unripe bananas, lemon & lime peel, pineapple shrub and pineapple rind. The aromas have a sharp fall off. It suddenly becomes thin. I get light and pulsating aromas of strawberries, raspberries, cherries, shrubs and lemon water.

I love the flavors and balance in this pour. As you can see, I make no mention of how hot it is, because despite the high ABV, it isn’t hot at all. The lack of expected heat is something I usually experience in spirits that underwent long fermentation. Despite being unaged, long fermented spirits also have a more structured and layered flavor.

Because this is molasses-based, funky and uses dunder, it would be normal to compare this to overproof and unaged funky rum from Jamaica. Yes, this batch 2 is funky and has this buttery texture and taste due to the malolactic fermentation, but they’re different. For one, Rummieclub’s Istill is different from the double retort pot stills used in famous Jamaican distilleries like Hampden. The yeast used are also different.

One of the best things about being a rum distiller is that you can sort of go the gin route: sell a white spirit to keep you going while your stocks are aging.

Having just tried a second batch release makes me really feel hopeful for Rummieclub. Unlike other distilleries, their unaged rum is damn good. I’m curious and excited to see what Rummieclub’s other batches and aged expressions will be like. Despite being not funky Jamaican rum, if you like those, you will like this. Of course, I can only be sure about batch 2 for now. For the time being, it’s looking like each batch will be different from each other.