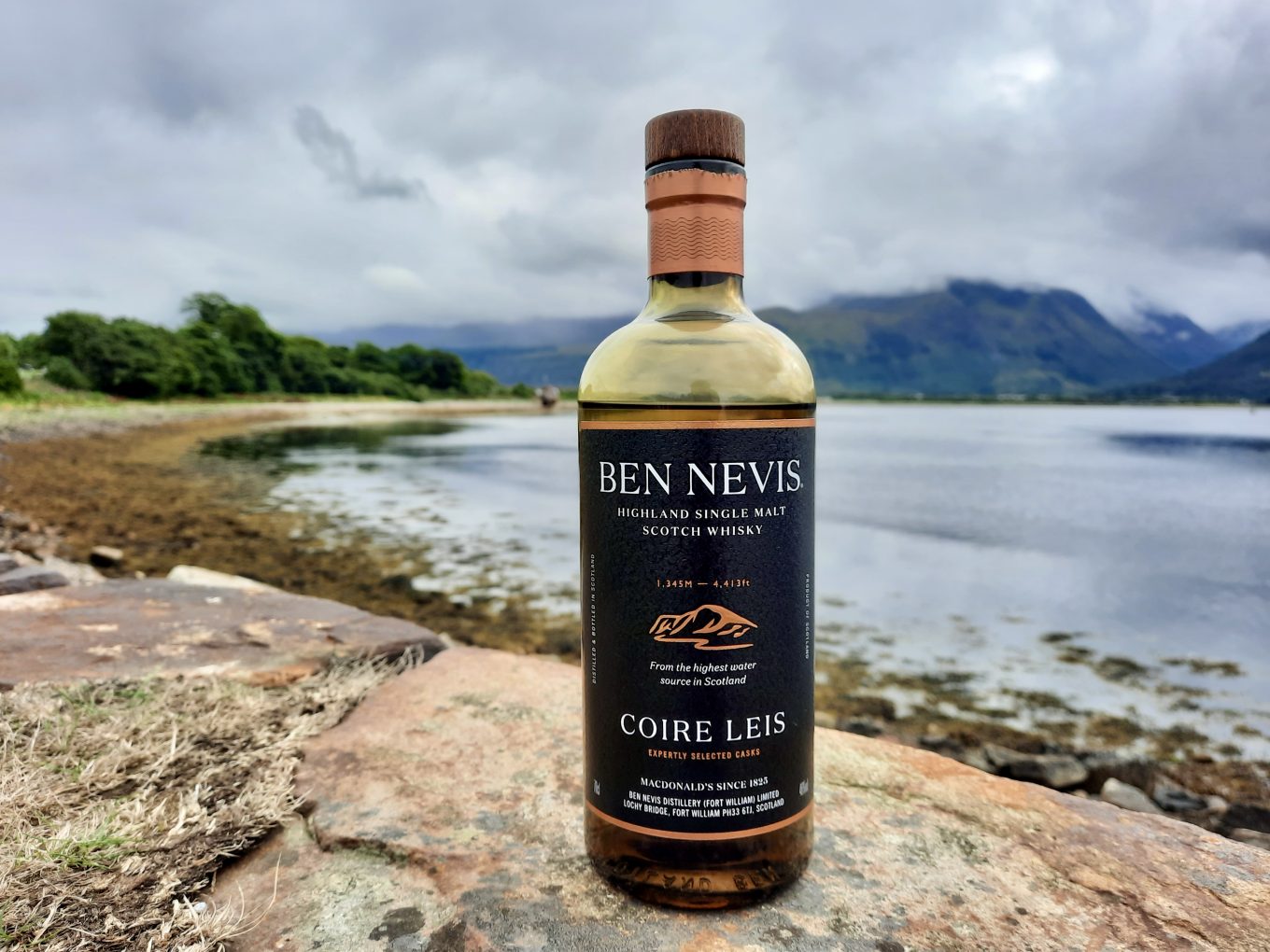 I can’t think of any other distillery that would rebrand their range, and release a new expression, without bothering to publicise it.

Yet, this is exactly what Ben Nevis appear to have done. I knew that new labels were coming thanks to my visit to the distillery in July, but a new release came as a shock. I was back in the Highlands in August, and it was my turn to entertain the children whilst my wife toured the distillery with her parents. She returned with a surprise: the Coire Leis, this unannounced new arrival, a couple of days before it appeared online at stores such as the Tyndrum Whisky Shop. She thought that as it was new, I’d definitely want to try it. She knows me too well!

The change in branding is pretty noticeable, in that the bottle was now adorned with a large mainly black label, with a golden outline drawing of Ben Nevis the main feature (the 10 Year Old has a white label with the same golden elements). It’s all fairly simple, definitely more modern, but not particularly eye-catching. The bottle and stopper are unchanged (still brown, and wooden respectively), and it seems to be a rebrand with a low budget, that does nothing to dispel the notion that Ben Nevis single malt remains low down owner Nikka’s priority list.

When I posted a photo on social media, there were complaints that the new look is boring, and even a comment that it would look at home in Aldi. Personally, I don’t mind it being a bit dull and not flashy enough for Instagram. A highly fashionable look would be out of character for Ben Nevis, and boring is fine with me, as long as the whisky remains at a high quality.

The Coire Leis is named after the water source for the distillery, a small loch whose waters run down the slopes of Ben Nevis towards Fort William. It’s a NAS whisky that seems to be designed as an “entry level” Ben Nevis single malt, and as such it is slightly cheaper than the 10 Year Old. Beyond that, I could find very little information about it, so I decided to contact the distillery by email for more information, in an attempt to glean further information about the rebrand.

I received answers from Innes at the distillery visitor centre to the following questions (the email conversation has been edited and re-arranged in parts for clarity):

Malt: I recently received a bottle of Coire Leis, but don’t know very much about it at all. Could you tell us a bit about this new bottling?

Innes: The Coire Leis (named after a lochan on Ben Nevis where our water source starts) is a non-age statement single malt matured exclusively in first-fill bourbon casks. We at the visitor centre haven’t been officially told how old the Coire Leis is, but we believe it is somewhere between 8 and 10 years old.

Malt: Is it possible to hear a bit more about the rebrand? Is the 10 Year Old whisky unchanged?

Innes: The rebrand was launched about three weeks ago (early August), and featured a rebranded 10 Year Old and the debut of the Coire Leis. The 10 Year Old – despite the new packaging – is still the same recipe.

Malt: Do you know if there are any special releases, single cask, or cask strength, in the pipeline?

Innes: I’m afraid I haven’t heard anything about upcoming single-casks or cask strength releases as these are normally kept well under wraps until the last minute!

I’m thankful that Innes took the time to reply, and we know a bit more than we did previously, but it seems that staff at the distillery are kept almost as much in the dark about Nikka’s plans for Ben Nevis as the general public. The main conclusions are that if you enjoy the Ben Nevis 10 Year Old, it remains a “buy on sight” kind of whisky. If you like the Glencoe 8 at cask strength then you’d better buy that if you get the chance too!

It must be time to sample the Coire Leis, to see what this new expression brings to the range. This is bottled at 46% ABV. £44.

On the nose: Lemon zest, orange, and sweet vanilla give a fresh start. Then malt biscuits, honey and oats come through, drizzled in cream, before whisps of charred oak arrive alongside some greener herbal notes and a touch of fennel.

In the mouth: Singed orange peel, apple pie and caramel (bringing back memories of tarte tatin!). There’s a fair amount of oak in the background, with digestive biscuits too, and then poached pears give it a lift before the spicy finish, containing pepper, cinnamon, chilli, and a hint of smoke. The traditional Ben Nevis oiliness and creamy texture is there, although quite restrained, and it goes down smoothly. The addition of water dials down the spiciness and gives more space to the fruits, but it is not a must.

Tasting it, it’s unmistakably a Ben Nevis whisky: it’s pretty oily, and packed full of signature Ben Nevis qualities. However, compared with the 10 Year Old, it’s paler, and nowhere near as heavy and chewy. Next to the 10 it even seems a little thin, and there’s a bit of bite to it that points to some younger spirit. Having said that, it’s still a good whisky, enjoyable, and is easier drinking than the 10. More of a session whisky perhaps; I can imagine it being liked by many a whisky drinker who prefer a lighter style. It is in keeping with the accessible profile of many a Japanese whisky released in recent years (not really a surprise). I do wonder why there hasn’t been the confidence to give an age-statement on the bottle, especially if it is aged 8 years or more as has been suggested in correspondence with the distillery.

The only problem I have is that it is priced too close to the 10 Year Old. If this remains at £44, and the 10 Year Old at £50 (current prices at a Tyndrum Whisky) then I can only imagine buying the Coire Leis if the 10 Year Old is out of stock. However, given the regular scarcity of the 10, having to settle for the Coire Leis would seem to be very likely situation indeed! As a fairly priced stopgap it will more than suffice, but if you’re looking for something more interesting and weighty, then you’ll be back in the scramble to secure the evermore sought after releases from independent bottlers.