A man walks into a bar…

The man is me, and the bar is an unassuming-looking watering hole in a harbor town. Though the barmaid is not named Brandy, I suspect that the establishment’s patrons have spent most of their summers on boats, albeit not in a professional capacity. A quick perusal of local real estate listings reveals home prices in the multiple millions of dollars. OK, so perhaps the bar’s down-at-the-heels appearance is a version of the old money penchant for worn out attire?

As our server enquires about our order, I scan the shelf behind the bar to assess the bourbon selection. Maker’s Mark will do in a pinch, but I was hoping for something a bit more compelling. Jim Beam White Label is an instant “pass.” The bottles quickly change to Canadian Club and Seagram’s VO… wait, what the hell is THAT?!?

I notice a familiar name on an unfamiliar-looking label. Squinting, I am able to make out “Austin Nichols” and “101,” on the cream-toned label, which also bears a turkey standing majestically in profile. Ignoring the rolled eyes of my wife, I saunter (fine, sprint) over to the bar and try to catch the bartender’s eye.

He’s busy pouring drafts and looks at me askance when I request to see the bottle behind the bar. Handing it to me begrudgingly, I sense that his patience is wearing out as I turn the bottle in the air, trying to discern any code etched on the bottle or label that will give me a clue as to its provenance. After a minute or so of this, he’s got his arms folded and is glaring at me. I intuit that he’s not interested in hearing about the old distillery, Jimmy Russell, cypress fermentation tanks, and the like. I thank him and return the bottle before shuffling back to our assigned booth.

When our server comes back, I excitedly order Wild Turkey 101, neat. She writes slowly, and then looks up with an eyebrow cocked. “One-oh-one, right?” Clearly, this is not a whiskey that gets called for frequently here, though I knew that from the fact that they had a decade-plus-old bottle of it that was three-quarters full. Embracing the type of clothing that others would have long ago consigned to a charity shop may remain the sartorial rule among the upper crust; however, this attitude doesn’t seem to extend to drinking the type of booze still associated – by some – with motorcycle gangs.

To my delight, our server returns with a brandy snifter loaded with a heavy-handed pour of my desired elixir. I put only a small dent in the drink over the course of the next half hour before I beg for a to-go container. Decanting the remainder into a plastic cup, I surreptitiously snap a photo of the unexpected bottle and slink quickly out the door.

Encounters with Wild Turkey expressions that hold any intrigue cause me to illuminate my own version of the Bat-Signal (the Turkey-Signal?) by getting in touch with David Jennings, a.k.a. Rare Bird 101, via DMs. He responded to the grainy photo I sent thus: “Cool. 1999-2011 bottle… it’s the old distillery and date depending likely the old barrel entry proof. 2006 has been a personal favorite. Nice classic vibe. Some modern complexity but some hints of dusty too.”

This was consistent with my experience in the moment, but I wanted to be sure by reviewing it out my standard glassware in my usual environment. I inquired with Ryan Alves, my go-to guy for collectible whiskey pricing, who informed me that current price would be between $200 to $300 (depending on the year), with 1999-era bottles going for up to $400. Bottling strength is 101 proof, of course (50.5% ABV).

On the nose: Classic Turkey profile, with the high end of the register coming through immediately in the form of confectioners’ sugar, underripe pineapple, floral air freshener, and the gentlest hint of cherry. Letting this breathe a bit reveals a thicker, richer note of oaky vanilla, as well as some subtle accents of new, conditioned leather. Yet more intensive nosing brings out a pitch-perfect note of honey and some wisps of green grapes.

In the mouth: Starts with the tart sweetness of lemon and cherry hard candies. This really evolves as it moves through the mouth; initially, a subtle earthiness and a gentle note of tobacco emerge on the forefront of the tongue. The woody notes take the baton as this reaches the crescendo, where the flavor profile pivots back to a rich, syrupy cherry note that is a pure delight. Into the finish the texture turns tannic and slightly astringent, though not enough to ever become uncomfortable or detract from the enjoyment of the whiskey. A monetary nuttiness appears before leathery, woody, herbal, and spicy notes are inseparably braided into a cohesive taste and texture as this makes a graceful exit through the long finish.

This is similar in many ways to some of the lower-proof special edition bottlings from Wild Turkey such as Russell’s Reserve 2003 and the Master’s Keep 17 Years Old. Those used to 101’s reputation as “the kickin’ chicken” would be astounded by the delicacy of some of the aromas and flavors on display here. I’d be unlikely to shell out $250 for a bottle but would probably go as high as $100, if I were to find an owner willing to negotiate.

Now to compare against the current-day incarnation of this expression. This is from a “handle” (1.75 L) bearing a laser code beginning with LL/JC, indicating this was bottled in March 2021. The bottle features the newly-redesigned label and molded Turkey in the glass. I purchased this for my home bar, where it has recently supplanted Evan Williams Bottled-in-Bond as my well whiskey (that extra 0.5% ABV just hits different). A standard 750 ml bottle of this retails for around $22, which is the price I’ll be considering when scoring this. As before, proof is 101 (50.5%). 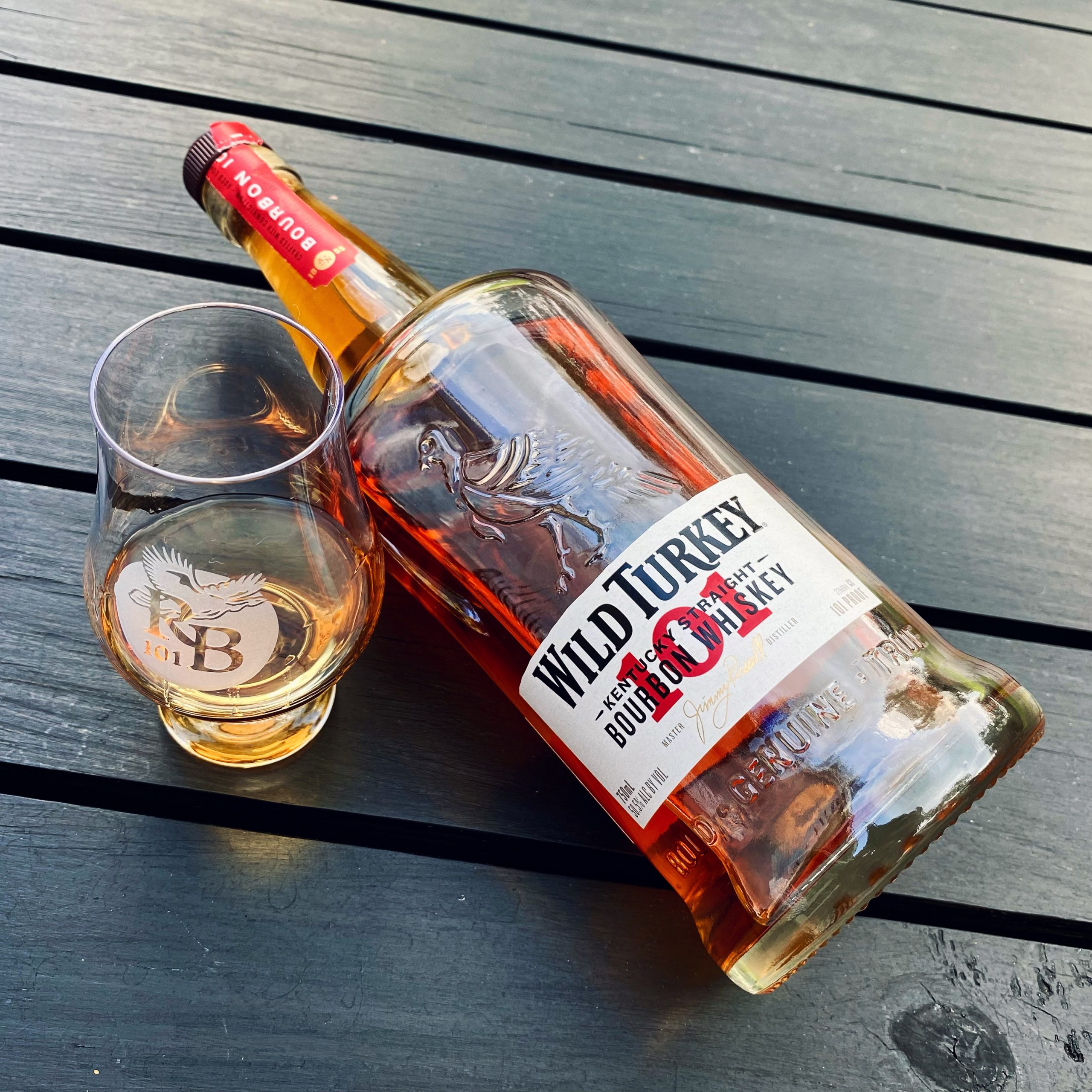 On the nose: Similarly sweet but in a richer, yet more youthful way. The floral notes are pushed to the periphery, with the core of the nose being comprised of a buttery note of corn and some plump, creamy vanilla aromas. There’s the piquant woodiness of cedar, a sprinking of nutmeg, a short citric burst of squeezed lemon, and some green, stalk-y aromas. Mostly, though, this is anchored on that richly sweet central note of corn and vanilla.

In the mouth: An immediately tart citrus fruit note subsides, leaving a floral sweetness as this bourbon creeps up the tongue. The middle of the palate reaches a perfect roundness, with an echo of the nose’s buttered corn note metamorphosing into the distinct flavor of butterscotch hard candies. Into the finish, this note broadens out to encompass some more woody flavors, as well as some vaguely spicy accents. The relatively high bottling strength is more evident here, with a slightly hot tingle radiating around the gums and lips after the final swallow.

Conclusions: Slightly younger tasting than the prior bottle of contemporary 101 I tried, this has less tertiary flavor development and expresses more of the sweet corniness that I associate with a less mature bourbon. With no details to go on, it’s impossible to tell whether this is actually a consequence of younger whiskey in the batch, or whether it’s just normal batch-to-batch fluctuations. Regardless, it’s still got a very favorable price/quality ratio, warranting a score above this midpoint of the range.

I’m always grateful for these little liquid time capsules, especially when I come upon them serendipitously. I’ve written before about how the conventional wisdom states that every last bottle of interesting whiskey has been bought up or drunk up, but my lived experience continues to argue the contrary. Hopefully this inspires you to go out and find your own forgotten treasure. I wish you all the success in locating a small taste of history.