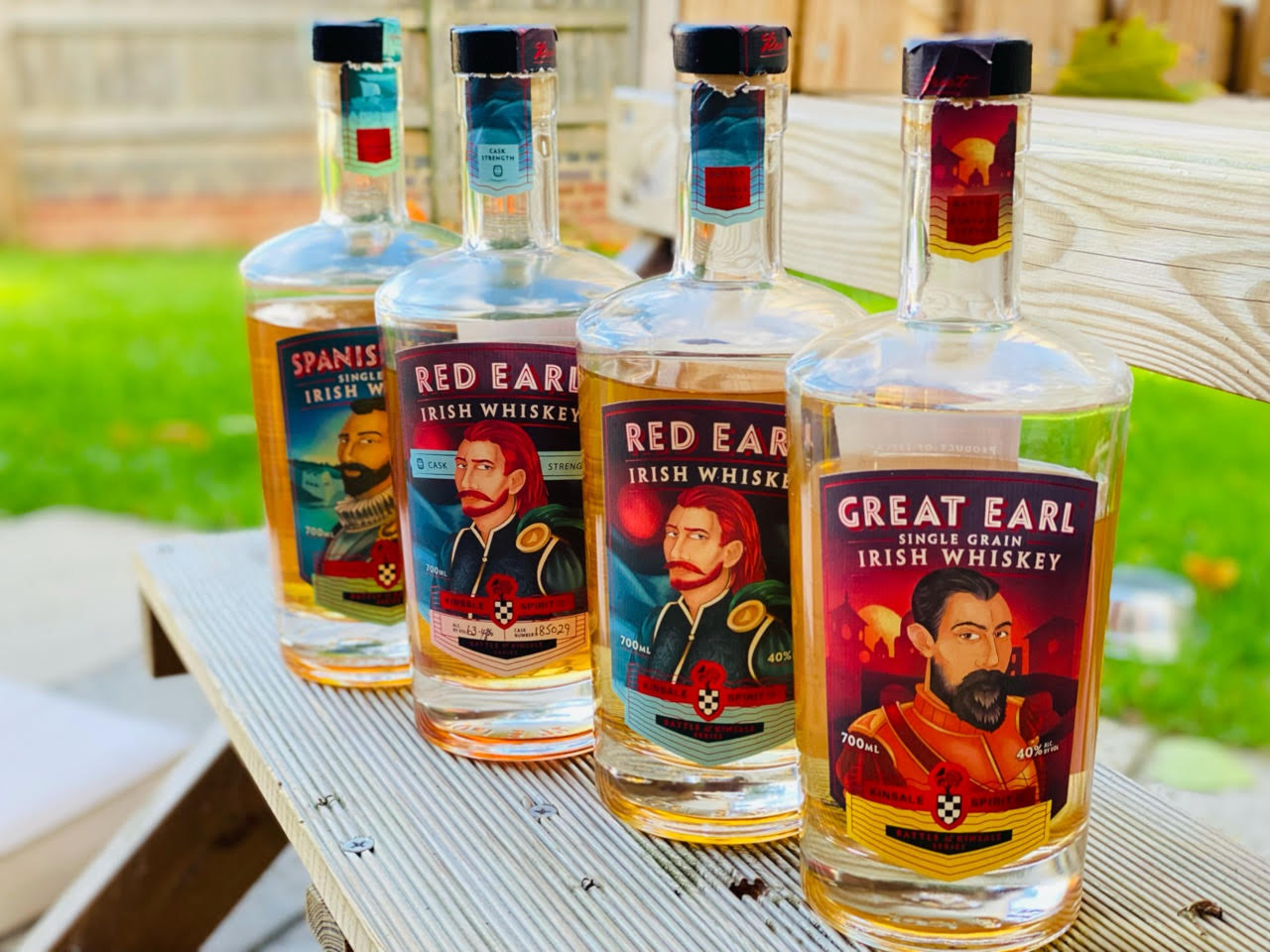 There’s nothing as exciting as a comeback: seeing someone with dreams, watching them fail, and then getting a second chance. Everyone deserves a second chance, so why not Kinsale?

You may remember that not so long ago, Kinsale Spirit Company’s release of the “Red Earl” unfortunately caught Phil on a stereotypically bad day and received a relatively low score. Anyway, Kinsale has been busy and have since released three new whiskies, of which Ernest Cantillion of Kinsale was very kind to send me a bottle of each (full disclosure done). The whiskey care package included the Red Earl spirit, which Phil reviewed, so I don’t think there’s any need to re-review it. However, they have since released a Red Earl Cask Strength, a Spanish Earl, and a Great Earl, all of which I will now explore.

Since Phil’s review, things have changed for Kinsale Spirit Company, too. They are channelling their inner entrepreneurship and endeavouring to bring whiskey into the 21st century by being the first distillery to auction a digital representation of a rare cask of 20-year-old single malt. This is the first time a whiskey cask has been represented by Non-Fungible Token (NFT) and auctioned. This is all to raise money for Kinsale to establish its distillery, which it is in the process of getting planning permission for. The completion of the facility could see Kinsale produce up to 30,000 bottles a year. The endeavour proceeded to raise €23,000 more than the €60,000 aiming mark, a statement of intent from a small, intrepid would-be distillery.

I, for one, certainly appreciate their boldness. During a worldwide pandemic, Kinsale has not been afraid to launch a whiskey at the most uncertain of times. With the lack of a high street presence and the impossibility of an in-person launch/presence at whiskey exhibitions, Ernest and Kinsale have had to launch everything via the internet with online media. A bold but ambitious attempt to try and overcome an overly crowded Irish whiskey market.

So, then, on to the whiskey! Firstly, the Great Earl, Hugh “The Great Earl” O’Neill. Following the Great Earl’s escape from Dublin Castle, he fought side-by-side with Juan del Aguila, “The Spanish Earl,” at the Battle of Kinsale in 1601. Leaving Ireland in the Flight of the Earls in 1607, he died in Rome nine years later, where he is still buried and immortalised in a fresco in Vatican City.

The Great Earl Single Grain Irish Whiskey is a combination of re-char-barrelled grain Irish whiskey and virgin oak grain, matured for 45 months, and then merged to spend a further minimum period of 3 months in ex-Sangiovese casks. These casks were sourced exclusively for Kinsale from the Lazio region of Italy, a nod to the final resting place of the Great Earl in the Vatican in Rome. This retails around the £33 mark from Kinsale’s website and is bottled at the standard 40% ABV. 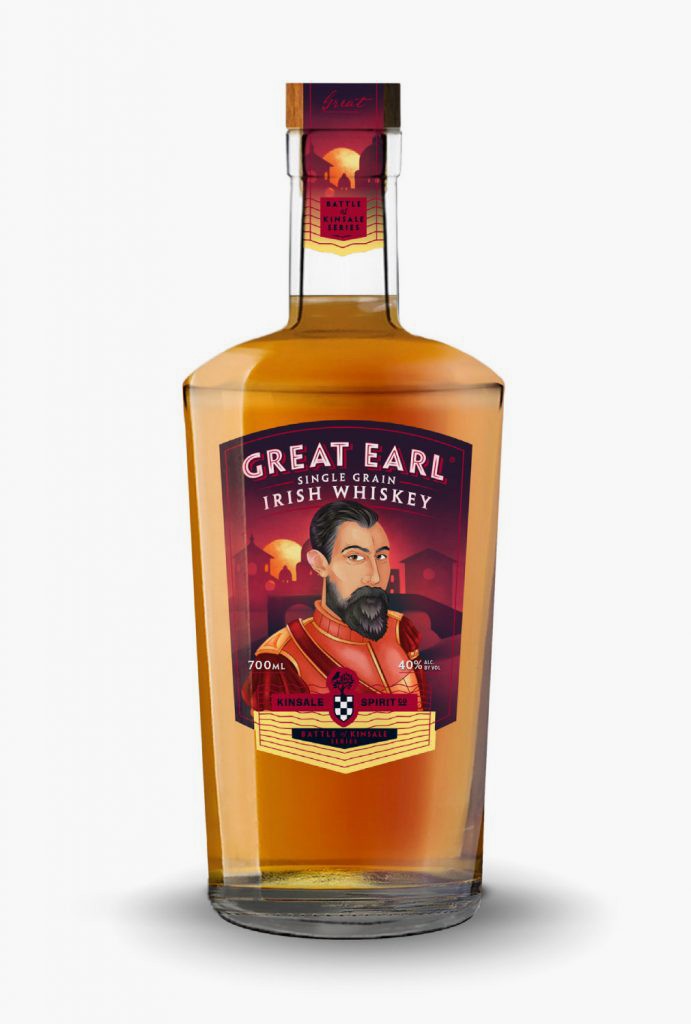 On the nose: Quite fruity; ripened bananas, tangerines, light strawberries, green apples,  marzipan and vanilla. Some oak notes to it, as well as some pear drops towards the end.

In the mouth: More of an influence this time around, more spice with some cinnamon and cloves cutting through. Then comes lots of sweetness too, Snickers bar, toffee popcorn and vanilla all present too. Very minimal finish; feels like it lacks some depth. I suppose it’s common for such a young spirit. A bit of warmth lingers from the spice, but that’s about it.

Secondly, the Spanish Earl. The Spanish Earl fought alongside Red Hugh O’Donnell (the Red Earl) and The Great Earl during an arduous, two-month campaign at the Battle of Kinsale, the ultimate battle in England’s conquest of Gaelic Ireland and the climax of the Nine Years’ War. During this time, he lodged in Portney’s Lane, Cork, and was a popular figure with locals. This is said to have influenced the stout finish of Spanish Earl Single Malt Irish Whiskey, which is also combined with a hint of rum cask ageing. Returning to Spain, helping wounded troops from his own funds, Red Hugh died – bruised but not beaten – in 1602.

The Spanish Earl Single Malt Irish Whiskey started aging in ex-Bourbon casks for nearly four years. It is then split into two finishing casks, ex-Imperial stout and ex-aged golden Jamaican rum. The two triple-distilled malt Irish whiskeys have then been recombined after at least three months apart and bottled. The stout element is inspired by Juan del Aguila’s time spent in Cork, renowned for stout production for hundreds of years, while rum is the preferred drink of seafarers of old. On Kinsale’s website, this retails for £30 and is a slight uplift on the Red Earl, with the strength being 43% ABV. 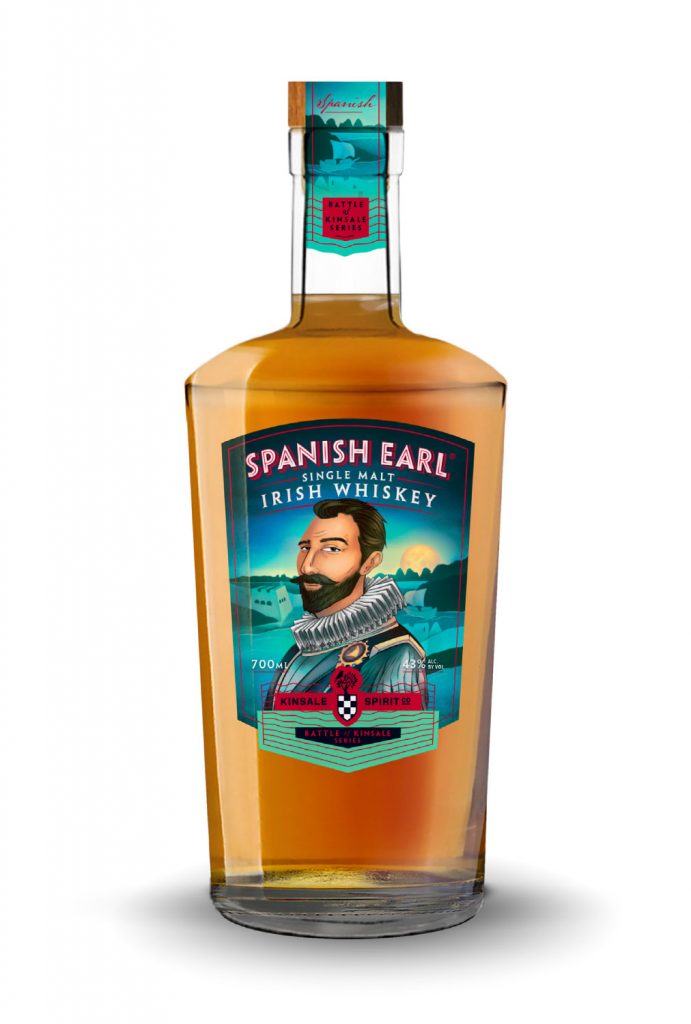 On the nose: Custard creams. Quite floral, dried raisins and sultanas, chocolate cream.

In the mouth: Tropical mix, mainly dried bananas, boozy tiramisu, brownies, nectarines. On the finish: spicy fruits, more warmth this time with some pepper and cinnamon.

The Red Earl comes with no change to the history provided in Phil’s review. A quick summary: Following the fight for freedom from the Crown at the battle of Kinsale, 1601, seeking aid from allies in Spain, Red Hugh O’Donnell, Earl of Tyrconnell, was murdered by an Anglo-Irish double agent & buried near Rioja. As a tribute to his story, the whiskey is first aged in bourbon barrels, then sherry casks, and finally matured in Rioja wine casks. The fundamental difference between this whiskey and the one from the last review is that this is bottled at a rather impressive 63.4% ABV. It’s not available on Kinsale’s website, but if you were quick, you might have been able to buy it on Irish Malts for £51.56 before it sold out.

On the nose: Light nectarines and baked peach with some lime zest. Floral notes to it too, a slight bit of carnations and lavender, but more so as fabric conditioner. There is some deep underlying spice to it as well, a hint of sandalwood. Laced with vanilla.

In the mouth: This has a real bite to it. The ABV comes out in full force but gives you the complexity of more fruity notes. This time it’s more red apples than peaches and buttery apple crumble with plenty of cinnamon thrown in. There’s some white pepper too, which gives it that extra little kick. Surprisingly short finish given the ABV, but it ends with the sweetness it started with, with added warmth and slightly more depth than the non-cask strength version.

Let’s start with the positives first: Firstly, the Cask Strength Red Earl is better than Phil’s review of the non-cask strength version of the Red Earl… not by much, but it is better. Secondly, I think Kinsale is definitely on to something with their branding, entrepreneurism and enthusiasm; the story of their whiskies is fascinating, but they need the quality of the whiskies to back up those legends.

Now for the bad: the whiskies aren’t terrible, but don’t exactly raise my pulse. I have scored two of them 4/10, as there are glimmers of hope. For me, the noses are great, but when it comes to the palate and especially the finish, the product just doesn’t deliver, unfortunately.

The Red Earl definitely needed a kick, the higher ABV absolutely does that, but it is just that, a massive “kick” with no real depth. I think that more of the spiciness of the Rioja comes through here, but still not a great deal of influence.

As fascinating as the Sangiovese finish sounds for the Great Earl, it doesn’t cut it as well as it should, I’m afraid. Again, the nose is good, but the palate, especially the finish, doesn’t get this whiskey to a place where it should be named after a Great Earl. I almost feel like Kinsale should have gone for simplicity over uncommonness in sourcing their casks.

Lastly, the Spanish Earl. A score of 4/10 reflects partly my like for stout and rum cask finishes and my appreciation of the simplicity that I was after. But I even think, “keep it to one finish, stout or rum,” which may have attracted a higher score.

I almost think that Kinsale has tried to finish their whiskies in some way to reflect the story of the Earl, whereas simplicity should have been key, in my opinion. I think as time goes on and Kinsale finally get their distillery built, and we could possibly expect better things to come.