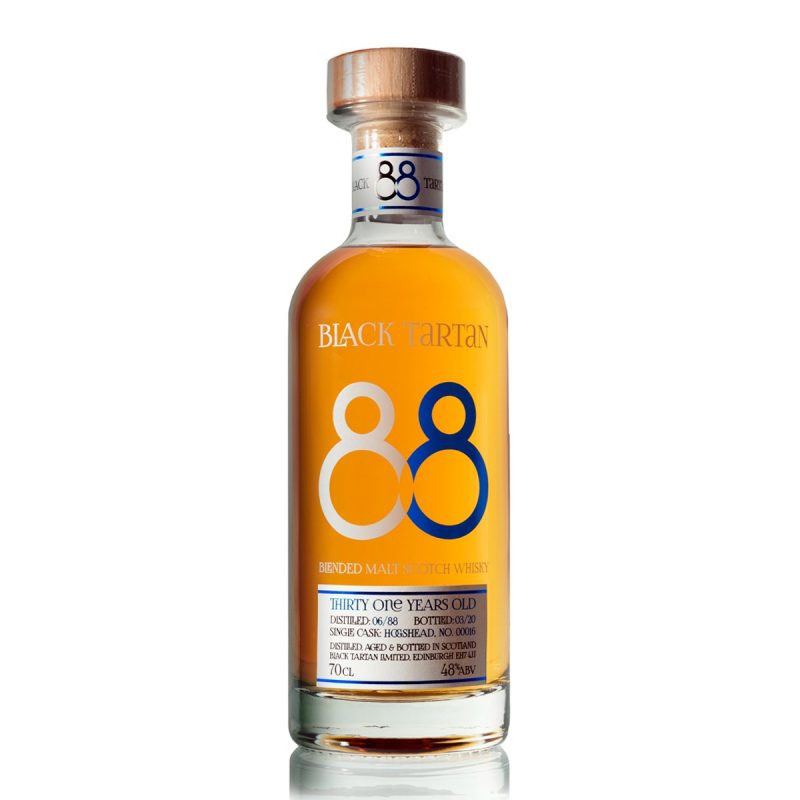 Imagine a camera panning over an Asian warrior with their clan of 88 clad in black.

As a fan of the Kill Bill franchise, when I saw the label on this whisky, my mind went immediately to the film. Like the fierce O-Ren Ishii, I feel like I have my own personal army of black tuxedo’ed sidekicks with this bottle of “Crazy 88”. In my case, I have my pied tuxedo cat Neko, my second in command, by my side and her little clones ready to take on the world!

Reading my preamble, I would not blame you if you had thought I had drank far too much to the point of having 88-fueled visions, but it is just the product of an overactive imagination! I am like that with most aspects of my life; that is the same for when I buy presents. I have to get a gift that is well-suited to the giftee and oftentimes I go a bit overboard, especially if it is for a special date.

There are many ways that people choose to mark important occasions in their lives, be it with an expensive piece of engraved jewelry or a hand-stitched quilt. For Scots (and other nationalities with whisky in their history) a special bottle can be a popular choice. Elsewhere it might be mezcal, rum, baijiu, or others if we’re going down the alcohol route.

Another option that is available, particularly with whisky, is to mark special dates with vintages. I encountered a most impressive example of this during my visit a few years back to the collection of Alfredo M. Goncalves at Whisky & Co. in Lisbon. The collection is vast but, in pride of place at the front, was the glass cabinet celebrating key events for the Goncalves family. A vintage to mark the birth year of Alfredo and of his wife, the year of their marriage and then, later, from the birth year of each of their three children. No mean feat, but it was made easier as he began collecting well over 50 years ago!

The best time to buy a vintage whisky from your birth year was probably at least a decade ago, but here’s a tip for you: the next best time is today! If you’re only a bit over the legal drinking age things might be somewhat affordable and you should have plenty of options, but for those who are 30+ things have gotten rather pricey… and if you want a particular vintage paired with a favourite distillery then you’ll need a bit of luck and some deep pockets!

The whisky I am reviewing today is very much a special occasion dram. I bought this bottle for my partner’s birthday last year. Not too crazy, and quite a thoughtful gift (if I do say so myself – ha!). It doesn’t leave you guessing about its vintage (and his) with the bottle front adorned with a smacking great “88.” I am not going to lie, the numbers did appeal to my Chinese mentality also. If you did not know, in many Far Eastern languages and dialects “eight” sounds a lot like the word for “fortune” and it is a favourite for most of my Asian brothers and sisters! Win-win!

I had never heard of the independent bottler Skene before purchasing this bottle. Usually when whisky shopping I have tried a sample at a tasting, have gotten a recommendation from a friend, or have at least seen something on social media. However – despite a low profile – Skene has a pretty well-stocked online shop with single malts from some typical indie favourites, as well as some blended malts.

Today’s review is one of the latter; the rumour mill suggests that this single cask was filled with a blend of Erdington malt whiskies (Macallan, Highland Park, and Glenrothes). It was then left maturing for 31 years before being bottled in 2020 at 48% ABV. Could this be something positive to have come out of that rather apocalyptic year?

On the nose: Sweet with toffees, caramels and honeys with a scrape of fresh vanilla bean paste. Fruit comes in the form of fresh cut galia melons with that hint of greenness, sweet juicy peaches and crisp red apples. In the air there is a menthol tingle and creamy custard with a burst of orange zest. That custardiness makes me think of cherimoya also known as a custard apple; from the scent, I imagine the texture and taste to have some qualities of this funky fruit. A ghost of acetol floats throughout and it is somewhat mineralic like a wet stone. Buttery oats and malted milk biscuits intermingle with white chocolate giving it a light creamy quality. Powdered ginger coupled with citrus scented wood polish and white pepper tickles the nostrils. Sharper notes of orange and lime tic tacs perfume the scent.

In the mouth: The fruit and sweetness translates through with watered down honey, orange peels and the addition of apricots and muted flavours of apple and pineapple turnovers. Heat from light chilli peppers and white and black peppercorn warms the palate. There are oils and cream; cream soda-like with its fizzy tingle playing about on the tongue. A slight bitterness dries the mouth and the liquid is fairly thin. Menthol cools things and those tic tacs from the nose makes their presence known. As the whisky oxidises, I get uncooked egg yolk and sweet shop aromas almost as if you have taken a deep breath in as you entered the confectioners. The finish is medium to long, with mint and white pepper burning hot and cold on the throat. There is a slightly bitter and drying end, but the oiliness lingers nicely to hold it in check. Sweetness is ever present throughout but not overpowering.

Sweet and quite complex with the flavours popping up and then fading into the background constantly. A whisky that I believe is good to cradle and to be savoured slowly as it gives more as it oxidises. It is elegant and coy but not too subtle. One that I have visited time and again and always enjoy. Saying that, there is no denying the entry price is quite steep at £248. If not for the significance of the vintage, and those big voluptuous lucky 8s, I would very likely have passed… but I have no regrets, as it is a truly delicious and complex whisky. If you want to treat yourself it is (at time of writing) still available from Skene’s web shop.