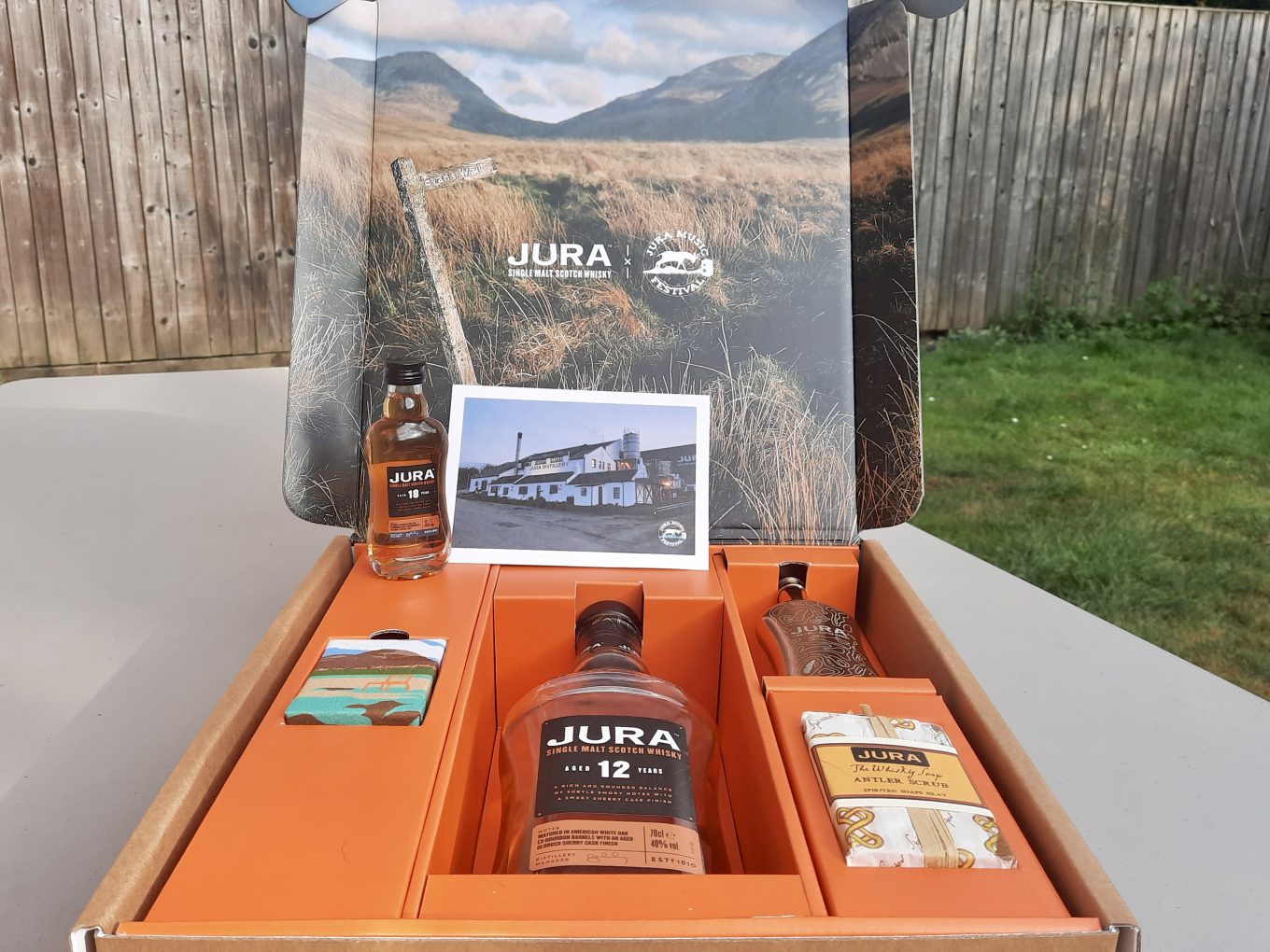 Graham isn’t the only Malt contributor who has been sent a whisky promotional pack of late.

I received a parcel of my own the other week, only its contents were quite different in nature to the Diageo Special Releases! Mine came from an island distillery that has been much maligned on this site by writers past and present alike: Jura.

Jura; a name that is used in whisky groups as a slur, a whisky that seems to have become the whipping boy of Scotch, the lowest of bars that all other malts are expected to clear, and a distillery that it is fashionable to dislike. After all, the core range employs all of the things that whisky aficionados rail against: chill filtration, low bottling strength, caramel colouring, and the sense of brightly coloured style over substance.

The package I received was certainly well presented. The stunning scenery of the Isle of Jura served as a backdrop on the lid of a box that contained a bottle of Jura 12 Year Old, 5cl of Jura 18, a branded hip flask, a mini painting (since acquired by my kids) and a further unexpected treat.

I am used to Whyte and Mackay tasting sets arriving with sweet treats, due to my participation in Whisky Shop tastings during lockdown. Fettercairn was paired with yummy marshmallows and a more divisive peach soda palate cleanser. The Dalmore Sherry Cask release was paired with delightful whisky infused chocolate truffles.

In this box, however, the Jura 12 was accompanied by a handmade soap, containing whisky and ground up deer antlers. I found this quite ironic, given the soapy nature of some Jura independent bottlings I’ve tried, and it made me wonder if I’ve got Jura all wrong. Maybe it is best enjoyed when in the bath?

The aim of this set was clear; to point beyond the whisky and the distillery, to the island on which it is produced. Jura is beautiful, with a striking skyline dominated by The Paps of Jura and a hell of a lot of deer. It’s remarkable, wild, and inspirational. The island has a population of around 200 people, who form a welcoming, friendly, and tight knit community.

It is this gem of a place, and those who live there, that I feel sorry for whenever I encounter the often mediocre whiskies that they cannot help but be associated with. They deserve better from distillery owners Whyte & Mackay. Although, it’s only fair to point out the extensive contribution of the distillery to island life, bringing both necessary employment and tourism. It’s not all bad, even if the whisky produced could be better.

The package arrived following an invitation to join a preview tasting for the Jura Music Festival. As I’m no “whisky influencer,” it was a pleasant surprise to be asked. I’m a fan of the Scottish folk scene, so I knew I would enjoy myself regardless of the standard of the whisky that was being promoted.

It proved to be an uplifting evening in what was a flu-ridden week in my household. Whisky was very much a secondary concern, providing an entirely medicinal function, although it was still, for me, an ever-present elephant in the Zoom room. The whisky-themed live music from David Latto was enjoyable, as was the craic between Andrew Lennie, the brand ambassador for Whyte & Mackay, and Vic Galloway. Vic is a long standing radio host (BBC Radio 1, BBC Radio 6 and BBC Scotland) who has previously collaborated with the Scotch Malt Whisky Society, pairing music with drams for one of their outturns.

Listening to music as part of the whole sensory experience when drinking whisky has cropped up occasionally over the years on Malt, but references to it have been pretty rare. It’s hardly surprising, with taste in music being every bit as subjective as the preferences of the palate, and because here we try to focus on what is in the glass, rather than any potential distraction. Yet, music often forms a part of our whisky tasting experience, even if we don’t think about it with any great intent. In a bar, it is usually there in the background. When drinking with mates, a Spotify playlist might be deployed, and in some homes music is almost ever-present. It was in mine… until we had children, anyway!

Particular pieces of music can evoke memories, good and bad. They can remind us of people who are special to us, and our most important life events. Music can take us back to different stages of our lives, and lead to a recollection of all manner of things, including our drinking and eating habits at the time!

Drinking Jura, and discussing the music that has influenced us, did indeed raise memories of days gone by. It’s only in the past five to ten years that I’ve become so interested in (or, you could say obsessed with) whisky. If we go back to my early twenties, when Britpop and the indie scene was the soundtrack to my life, it was very different indeed. It was much more simple for a start, with no children, and work that was less demanding, but unfulfilling.

My drinking habits were different too, with beer my favoured poison following football or cricket. Money was tight, whisky was a luxury purchase, and choice was determined by what happened to be on offer in the supermarket. It had to be a single malt though, a prejudice inherited from my dad that has since been overcome! Most of the whisky I drank came as birthday or Christmas presents, and Lagavulin 16 was to me the treat of all treats.

As a result, Jura is probably the whisky that I have drunk the most of through the years. Over time, I’ve taken a greater interest in what I’m drinking, my whisky knowledge has improved, my taste has developed, and my budget has increased. But back then I liked Jura and even enjoyed it as an easy drinking whisky with just a touch of smoke.

Admittedly, my brain was firmly switched off, and whisky wasn’t something I expended energy thinking about. I had no idea what else was out there, and I didn’t really care. I write this not as some kind of “woe is me” whisky history sob story, or “rags to riches” kind of tale, but as a reflection of life for many a supermarket whisky buyer. Ignorance was bliss; it still is for the majority of casual whisky drinkers. I sometimes yearn for those more simple times.

The reality is that Jura sells, and it sells well, making a healthy profit in the process. How it is thought of by whisky geeks (myself included), and most likely the majority of the Malt readership, doesn’t matter a great deal in the grand scheme of things. We are not the target audience, especially when it comes to the bottom end of the range. Yes, we can keep saying Jura’s core range could be a whole lot better, and we can point anyone who wants to listen in the direction of other similarly priced whiskies that we deem to be of a higher quality, but you get the sense Jura is fulfilling exactly the role Whyte and Mackay wants it to in their portfolio. Whilst the market is there for it, they’re going to continue producing whisky in a style to supply it, and that’s OK. Sometimes, it is easy to forget that the whisky world doesn’t revolve around me and my palate, however much I’d like it to.

It’s been a while since I’ve had a bottle of Jura, so I was interested to come back to it now that I’m much further along my whisky journey. Is the scorn directed towards it unwarranted or deserved? There’s only one way to find out. 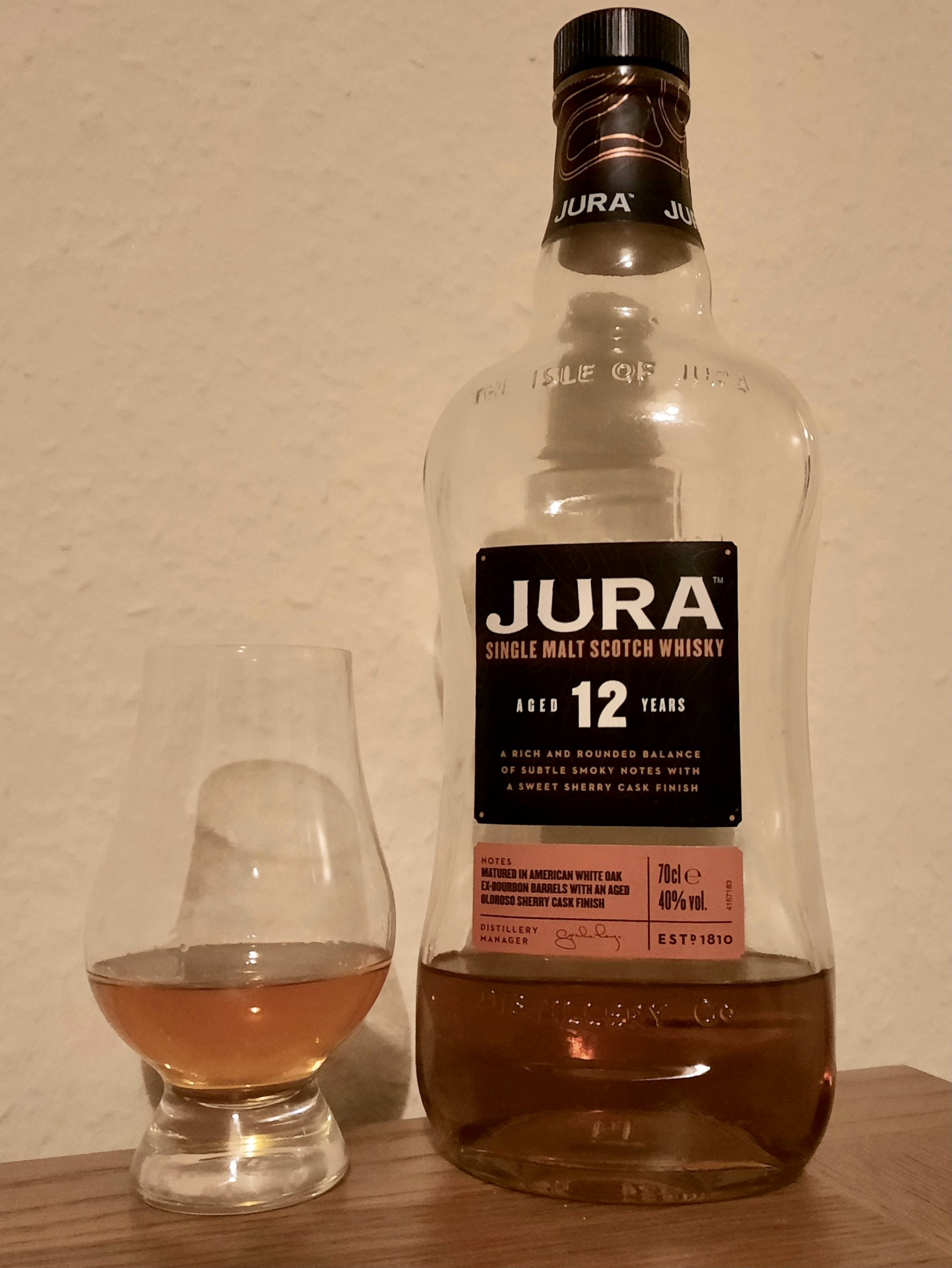 On the nose: Crème Caramel, toffee apple, milk chocolate, burnt toast, heather, leather and honey. The sherry influence is there, but quite muted. There’s a bit of earthy mustiness to it all, and an unexpected hint of fresh putty; I never expected a whisky to remind me of a bathroom refurb!

In the mouth: Dark caramel dominates at first, but there are more layers if you’re patient. There’s subtle peat smoke and char, coffee, chocolate raisins, hazelnuts, and spiced apple, accompanied by a less pleasant note of soggy cardboard and damp wood. The finish is smooth with spiced caramel that lingers for a few seconds.

It’s a bit lacklustre, but I am sure that my blissfully ignorant 25-year -old self would have been happy with it, especially if it was bought at a discounted price or received as a gift. Ten years on, I’m not so easily pleased! This is part of a range that includes the NAS Journey, a growing host of brightly packaged NAS cask finished expressions, and a 10 year old bottling. So, when I came to the Jura Aged 12 Years, I expected to find a noteworthy step up from these entry malts.

On the whole, this is an inoffensive whisky that offers a little more complexity and bite than the 10 year old, yet it simply has not been given a chance to show significant progression. As it is also bottled at 40%, the cask influence is muted (tired old wood?), and as a result everything feels a bit dull. Those who want something light and easy going will likely prefer the 10 year old, whilst there is not enough depth here to satisfy more journeyed whisky enthusiasts. In the end, you’re expected to pay more money for a slightly bigger age statement, without finding a sufficient improvement in quality.

The presentation of the Jura range is especially frustrating when you compare it with the relaunch of Fettercairn. In the well-received Warehouse 2 Fettercairn releases you have a higher ABV, no chill-filtration and, above all: tasty whisky at a relatively accessible price. To find a well presented Jura you have to pay in excess of £100, which is beyond the reach of many, as well as being quite a leap of faith considering the quality of the entry level releases.

If Jura wants to be taken seriously, assuming it has the suitable stock to do so, then releasing a similar series to Fettercairn would seem a good start. We now know what Whyte & Mackay can do with a previously maligned whisky when they want to. We can only hope that one day they will choose to do the same with Jura… not only for our sakes, but for the sake of the island’s inhabitants, and Jura’s brand ambassadors, too (surely that’s a tough gig from time to time). In the meantime, I can only conclude that I have moved beyond Jura’s target market and focus my attention elsewhere.

Anyhow, this is an article that began with the Jura Music Festival, so it seems right to end there too. The festival site is still up and – should you wish – you can be transported to the Isle of Jura, sample some pulsating folk music, slow right down as you take in some wondrous landscape, and enjoy some stories of island life. I found it worth a visit because I spend a lot of time wishing I was in Scotland, and it satisfied that longing of mine for a few moments. But, the best thing about a virtual festival is that you need only drink Jura if you want to. You can sip anything you like as you watch along, even a lovely cup of tea!

Many thanks to Jura for the event invite and the promotional pack, which you can tell does not affect our notes or score.