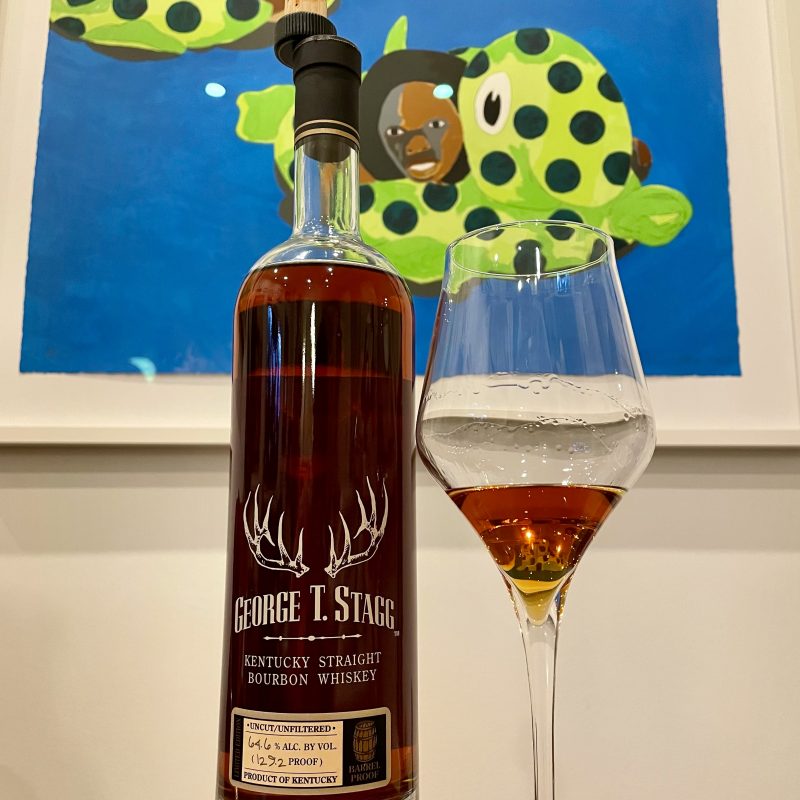 What do you get when you expect perfection?

“Disappointment, of course” would be the arch-cynical and totally predictable retort to this question. As anyone who has bothered to chase down a whiskey that has been the recipient of the most exuberant praise can tell you, high hopes are often the precursor to dashed dreams.

Plaudits from renowned critics and multiple medals awarded in “competitions” are only two of the potential causes of excessive optimism when it comes to whiskey. In the case of the bourbon I’ll be reviewing today, there’s a perfect storm of prejudicial factors that serve to reinforce my belief that I might be flirting with an immaculate expression here.

To adequately address these factors, I’ll need to acknowledge upfront the name of the bourbon in question: George T. Stagg, specifically the 2017 release in the series. You know George T. Stagg, of course, from its inclusion in the Buffalo Trace Antique Collection. That alone would serve to ratchet up my predictions about the likely quality of this bourbon, but the fact that it comes from one of the better-regarded recent vintages only serves to further stoke the flames of my excitement.

There are some additional intangibles in this case that – while I can’t quantify them – bear mentioning as subconscious influences on me. I’m aware that this bottle fetches sums well north of $500 on the “secondary market.” Though I maintain my disdain for this free-market-in-name-only, I acknowledge that there is some reflux of resale trends into overall perceptions of the relative desirability of bourbons from which I may not be completely immune.

Even though I didn’t buy this off a social media group, I nonetheless overpaid for this bottle. SRP on release was $90, but I shelled out $250 plus a tip, bringing the grand total to $310. In my defense, this wasn’t an act of unvarnished tatery on my part. I purchased this in the early days of the COVID pandemic and associated lockdown, from a local restaurant that was selling off the family whiskey jewels in order to keep supporting their staff.

This establishment had been the site of many delicious meals and memorable whiskey experiences for me, so I felt that giving back – in exchange for a bottle I very much desired –  would be the least I could do for them. I’m more proud of the fact that I continued to order carryout from them as frequently as good health would permit. Big Star seems to have made it through the crisis and has been able to resume hosting the fans returning to watch Cubs baseball, a set of poor souls truly deserving of all our pity.

I sent a friend to collect the bottle in March 2020, but only retrieved it from him myself last weekend. I opened it that very night, sharing it with yet another friend who I hadn’t seen in far too long. The remainder will be enjoyed by myself, as well as by others with whom I intend to share it. With all that in mind, I am hoping that the karmic forces in the world might repay my good deeds with an extraordinary bourbon experience.

Before I reach the promised land, a few more details about the contents of this bottle. The release letter from Buffalo Trace fills us in on the particulars of this expression: distilled in the spring of 2002 and released in the fall of 2017, this is drawn from 309 barrels matured in Warehouses C, K, M, and Q. Aged 15 years and three months, this is bottled at 64.6% ABV (129.2 proof). I’ll be using $300 as the reference for evaluation on Malt’s price-sensitive Scoring Bands.

On the nose: Initially, this presents a very pretty aromatic profile of freshly cut spring flowers and candied cherries. Allowing this to breathe in the glass allows the nose to unfold with layer after layer of blooming scents; the fruity notes become more rich, in the manner of marmalade, then turn toward a sticky hard candy-like fruitiness of Lime Jolly Ranchers. Exotic spicy notes of cardamom and jasmine begin to creep in around the periphery. A smoked sausage aroma of hot links imparts a subtly savory aspect to this. Now, fried chicken and waffles, with hot sauce… it never ends! This is mesmerizing; it delivers enticing aromas upfront but continues to evolve in ways that make it nearly impossible to stop sniffing at.

In the mouth: There’s a pitch-perfect marriage of lusciously ripe cherry notes and the rock-solid drying flavor of limestone as this greets the tip of the tongue. This zips up the center of the tongue with a citric and stony focus before blossoming into a fragrantly woody flavor with abundant floral accents of rosewater and potpourri. At its zenith in the middle of the mouth, this unifies all the aforementioned floral, fruit, wood, and spice notes in complete balance, becoming fully realized and totally integrated bourbon whiskey for one very satisfying moment. The finish tacks back toward cherries, this time in the viscously textured and medicinally herbal manner of cough syrup that becomes mouth coating and persistent. Long after the last swallow, this lingers with both flavors and textures harkening back to the journey heretofore, as well as introducing some novel notes of iced tea and tarragon. There’s a slightly radiant heat throughout this, but nothing that ever knocks the overall experience off kilter, despite the comparatively high proof.

The best of the Staggs I have tried and, indeed, one of the best whiskies I have ever tasted. The nose on this is a wonder, not least of all for the breadth of aromatic development that unfolds over a mind-bendingly long time. It’s so enthralling that one could be forgiven for forgetting that this can even be sipped. However, from the moment the bourbon meets the lips, it delivers on the promise of the nose and adds yet more delights besides. This expresses power with poise; there are moments that the various elements in this are woven together in such elegant harmony that they fuse entirely, becoming impossible to distinguish. The resultant impression is of perfect whiskey with every aspect in its correct proportions. There’s not a lot of bourbon worth $100, much less $300, but the 2017 Stagg is one of a select few that rewards the oversized outlay with superlative sipping. I’m obligated to score this at the very top of the range.