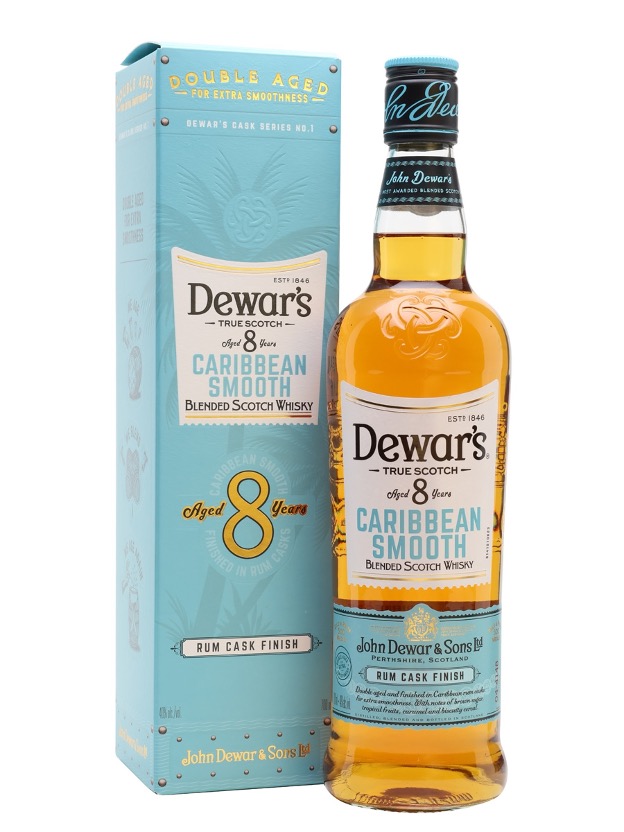 Ever since I got into rum, the ambiguity of the type of rum cask used in whisky maturation or finishing has been vexing.

As mentioned in my Classifying Rum article, rum’s diversity comes from the fact that so many countries can make it. From many countries come many different cultures. Different cultures bring about a plethora of styles. Where there is sugarcane there is rum, or a form of sugarcane spirit being made. However, the brands who go to great lengths in distinguishing themselves from others seem to do a less-than-half-assed job when it comes to helping their consumers identify what rum casks they used.

The large companies mostly have rum brands under their corporate umbrella. Diageo has been handling global distribution for Guatemalan rum Ron Zacapa since 2008. Don’t forget, they also own Captain Morgan. Very recently, they started working with Santiago De Cuba from Cuba. Bacardi has Bacardi. Brands such as Santa Teresa from Velenzuela and Banks are also under them. Campari has had a controlling stake in Jamaica’s Wray & Nephew since 2012. Brands like Appleton and Coruba are under Wray & Nephew. Campari also just acquired some Martinique Agricole brands too. Pernod Ricard has been Havana Club’s global distributor since 1993. Remi Cointreau has had full control of Barbados’ Mt. Gay since 2014. Louis Vuitton Moet Hennesy (LVMH) has recently launched their Eminente Cuban rum. Edrington has Brugal from the Dominican Republic.

A few of the online whisky brand tastings I’ve recently attended mentioned released and to-be-released expressions that’s spent time in ex-rum casks. So, I asked if they used ex-rum casks that come from rum distilleries under their corporate umbrella. They said they either have to double-check the information with their higher ups or they can’t reveal it.

These answers have me thinking that they want to keep the respective Scotch brands separate from their rum brands. It makes sense; some consumers don’t like to be associated with some brands, even if some of the brands they don’t like are under the same corporate umbrella as the ones they like. I think this really rings true to a portion of whisky drinkers.

There’s also a portion that thinks rum is an inferior drink. I don’t blame them; I used to think the same until I saw past the tip of the iceberg. But shouldn’t the opposite also be taken into account? A portion of the market, while shrinking, still thinks whisky is an intimidating category to get into. But, since rum has had this fun image for a long time, they don’t hesitate to get into the entry level rum brands. What if Dewar’s – which is owned by Bacardi – tried marketing their Caribbean Smooth as aged/finished in ex-Bacardi casks? They might be able get Bacardi drinkers to sip on Dewar’s, if they aren’t already.  If they don’t want to get that specific, how about aged/finished in “ex-Puerto Rican rum casks?”

Would it really hurt the whisky brands to be more specific about where their rum casks came from? Take a look at this Great Drams list of Scotch that has spent time in ex-wine casks. There’s a Deanston matured in ex-Bordeaux casks, an Arran finished in ex-champagne casks and Ballechin matured in ex-Burgundy casks. Of course, I can’t fail to mention the type of mainstream ex-fortified wine casks. Ex-Oloroso sherry, ex-Tawny port, ex-Ruby port and ex-Pedro Ximenez sherry casks are almost inseparable from whisky these days. People go nuts and pay ridiculous amounts of money for them. These are all wines from specific wine production regions. Consumers have an idea of what they are, which means the cask influence brings about a certain level of prestige and expectations.

What would the consumers think if a brand simply just used vague terms such as matured/finished in ex-red wine or ex-sparkling wine casks? The value and hype would go down. This leads me to wonder if the whisky industry being vague with the type or origins of the rum casks used is intentional. Keep a competing spirit down to help keep whisky on top a little longer. Wine isn’t a spirit, so it’s not seen as competition.

I understand there are some issues to consider. Whisky aged in ex-Cuban rum casks may not be allowed in America. Some rum distilleries will also not allow their names to be used. This is why I’m asking: why not use the country of origin? There might also be casks from brokers that may have held multiple styles of rum.

Perhaps the brands don’t really care about the type of rum casks they use. They’re satisfied as long as they get to use ex-rum casks to make a limited and/or new expression. Maybe brands can keep ex-rum casks on the front label, but add “these ex-rum casks held pot-distilled rum” or “a mix of rum casks from X & Y” on the back or label or in their marketing pitches, if possible. Brands such as Appleton will surely not allow “ex-Appleton rum cask” to be used on the whisky label. Use “ex-Jamaican rum casks” then. How much of a hurdle is that really? Marketing gets paid big bucks to find loopholes. Maybe they’re just not putting enough effort in trying to understand rum.

On the nose: This is a real live one. In the first instance of smelling this, I get light aromas of apples, graham crackers, honey, vanilla, cloves, and anise. In the second instance, I get light aromas of orange peel, mint, Febreze, sapodilla, browned bananas, cinnamon, and muscovado syrup. There’s a sudden lack of aromas after that. It lost all its life in a quick span of time.

In the mouth: A boring mess. I get light tastes of bungled up sweetness, spice, and some tannins. Think honey, apples, cinnamon, tannins, and something zesty. Like the nose, it’s short.

I thought my rant was over, but this has to be the worst 8 year old Scotch I’ve ever had. It was so promising on the nose. The complexity and layers had me thinking this blend would be outstanding. There’s this lack of depth which I didn’t mind. It is a blended whisky by a big brand after all.

When I got past the nose, I knew it was too good to be true. The best thing about this in the mouth is how there’s no heat. Everything is just a bungled-up mess. This gives me a mental image of Spongebob’s fake muscular arms suddenly going flaccid.

I’m glad I didn’t buy a bottle of this. No wonder they’re pushing this as a cocktail mixer. The low price doesn’t even get this a 4.

Second is this single cask Kilchoman finished in an ex-Caroni cask bottled for La Maison du Whisky’s 60th anniversary in 2016. Because La Maison Du Whisky (LMDW) has a great relationship with Velier, it seems like they were able to source an ex-Caroni from them. This type of labeling is what I’m talking about: they’re specific with the type of rum cask used. Of course, they’re not the first to do so. Billy Walker-era Benriach had a 15 year old Dark Rum finish and their 12 year Arumaticus Fumosus. It’s not mentioned on the front of their labels, but at least their website mentions the casks came from Jamaica.

I’ve mentioned in the past that I’m working with the importer of La Maison and Velier brands for the Philippines. This means I deal with both La Maison du Whisky and Velier. But, I bought this Kilchoman in 2017 during my trip to Singapore. This is why I haven’t been reviewing any of the official Foursquare bottlings available to me, and any brands associated with Velier such as their Habitation releases, Clairin, and Hampdens. But, reviewing a discontinued limited expression sold out years ago should excuse me from the Malt rules. 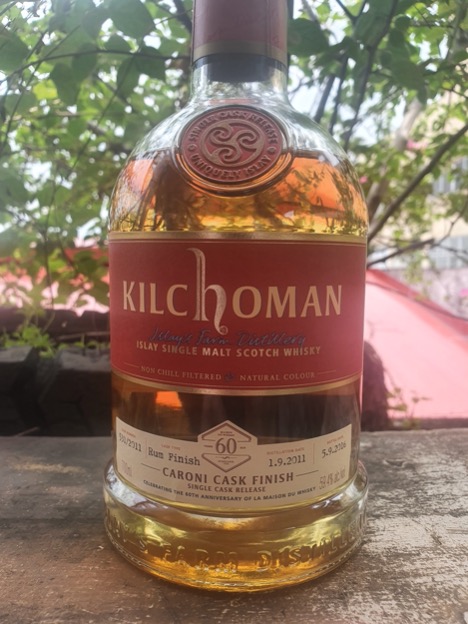 In the mouth: Everything is more intense here, especially the heat. I get very pronounced tastes of smoke, peat, powdered nuts, and grilled citrus peels. In between those are subtle tastes of apples and bbq sauce. After those are more intense smoke and peat accompanied by subtle grilled pineapple rind, kiwi, starfruit, kombu, honeydew, and toffee. Subtle and lingering tastes of peat, smoke, shaved nuts and fruits coat my mouth after swallowing.

If you bought this expecting to encounter a magical blend of peat and Caroni funk, then you’ll end up disappointed. There is no mention of how long the whisky spent in the ex-Caroni cask, but it’s likely just a few months. That amount of time isn’t enough for the Caroni flavors to create a better balance with the peat.

I bought this in 2017. This was when I was just very new to rum. The Caroni flavor not being dominant was something I expected, but I had hoped to pick up more Caroni-ness in this. Alas, it was a disappointment. I think the rum cask influence gave more fruity notes and dulled down the nuttiness I usually get from Kilchoman.

Having had this makes me think peated whisky plus funky rum cask finishing is more of a gimmick than a reliable trend. It’s just going to be hard to meld two opposite ends of the spectrum flavors from two different spirits. It might work if the peated whisky were older, as it makes the peat and smoke less robust and if the whisky spent at least 2 years in the ex-funky rum cask.

Is this worth the price? Not really. The factors of this being a single cask, anniversary release, and the rum cask finish are mainly responsible for the jacked up price. It’s certainly an experience and something to talk about since ex-Caroni rum cask finished whiskies aren’t common. 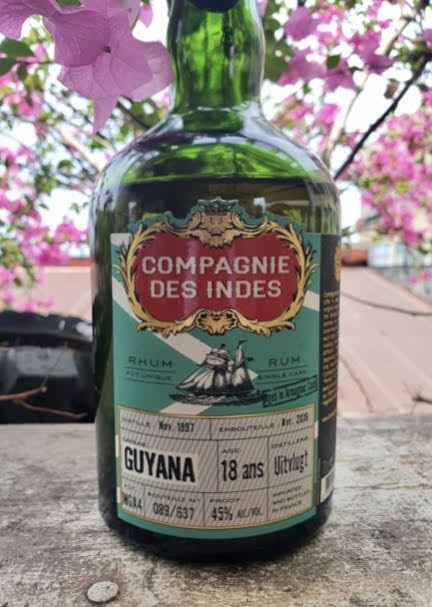