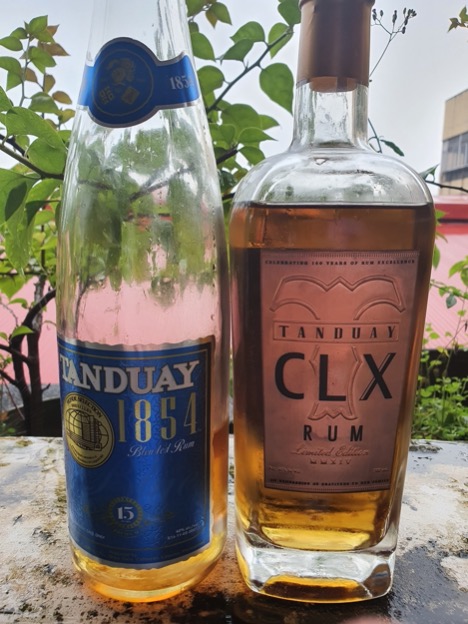 I have authored the majority of MALT’s recent rum reviews, but I must admit that I forgot about Tanduay due to how little multi-column-distilled spirits interest me. The trigger to finally investigate it came after a few friends attended the recently concluded New York Rum Festival & Congress this August. Tanduay has been active in the U.S. for a while now, so it’s not a surprise that they had a booth there.

Despite the presence of other good rum brands like Worthy Park, Holmes Cay and Chairman’s Reserve, they told me that, surprisingly, the Tanduay Gold and Silver they had tried were good. I should mention, though, that I’ve been told by more experienced spirits industry folks that some brands at spirits fests or shows bring bottles with better-than-average product.

Does Tanduay even need an introduction? It seems that everyone, even non-drinkers, Philippines-based or not, knows the brand. According to this article in The Spirits Business, they’re the world’s best-selling rum for 2019 and 2020. Despite being Filipino, it’s still baffling to see that another brand can outsell the more international Bacardi. While a best-selling title renders some consumers senseless and flocking toward a name, this best-selling title doesn’t mean much to me, and I’m pretty sure to you. Discerning drinkers know that best-selling these days doesn’t mean best in quality.

If you’re wondering how Tanduay can outsell Bacardi, it’s because they’re consumed the most locally and targeted towards the masses. (I hear that Puerto Ricans drink more Don Q than Bacardi). Some other local brands like Emperador ship millions of cases in a span of a few months to the provinces, and the widely available expressions are all under $10, so the case is likely the same for Tanduay.

I have a feeling that Tanduay has grown more aggressive in foreign markets in order to give the brand a more premium reputation. After all, more foreign market presence makes brands from third world countries more enticing. It reminds me of Don Papa’s early marketing tactics. In the early 2010s, they used the EU market to render themselves more attractive. Back then, the market’s lack of education about rum was staggering. Far more consumers at the time thought that rum was naturally sweet, so they were able to fool a lot of people.

Tanduay isn’t known for sweetening their rum, though it’s possible; the image of the “15”-year-old Tanduay 1854 seems to confirm that they do (I’ll explain the random quote marks later). It’s also nice to see that they’re being transparent on the label with what they add, as seen in the “sugar” and “nature-identical flavor” under “ingredients.” 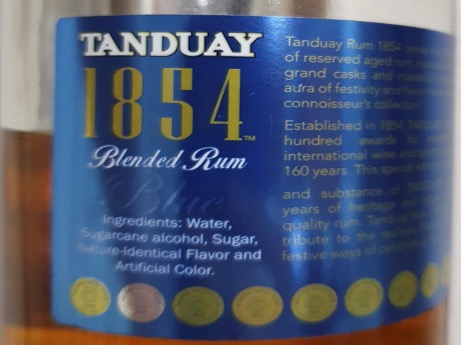 Even though I should be showing local brands some love, I’m not a huge fan of Tanduay. Their style of rum is close to Bacardi’s. They make really light rum that rely more on cask influence for flavor and are more appealing to consumers looking for a smooth drink. I know a few folks who have worked with and for them. According to these sources, efficiency is a word that’s said a lot. Efficiency almost always suggests that the company places more importance on quantity over quality. Because a person can only consume a finite amount of booze and food over one’s life, I’ll always choose quality.

First up is Tanduay’s 1854 “15” year old. This rum was made to commemorate the company’s 150th anniversary in 2004. The “15” is in quotation marks because there are small words on the label that indicate the age statement is fake. I want to thank The Lone Caner’s review for pointing this out; otherwise, I wouldn’t have noticed due to the sly labeling. (See the golden words around the number; essentially, it’s saying “blended with 15-year-old aged rum,” not that the entire bottle is that age.) 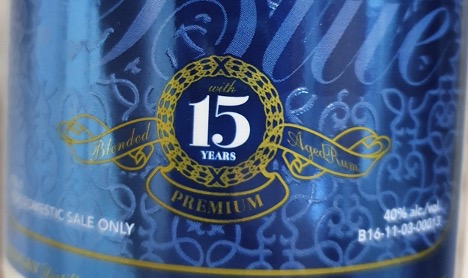 On the nose: Light, slightly long and fragrant aromas of Bazooka bubble gum, red lollipop and caramel obscured by a mild prickle of ethanol. It all falls apart after that. I get very thin aromas of cherry-flavored hard candy, half-assed orange candy and caramel apples that are heavy on the caramel.

In the mouth: The ethanol is a lot more prickly in the mouth, and it lasts longer, too. Immediately after that assault, I get light, brief and interchanging notes of caramel apples, candied orange peel, Almond Roca and even lighter notes of red candies.

I’m a bit torn. There is nothing offensive about this rum; despite being thin and hot, it’s quite drinkable. Still, I’m pretty sure the additives are doing most of the work… yet, I also have to consider the fact that Tanduay was honest about using additives! This is something a lot of the educated wish more rum brands will do, but despite the clamoring, they still don’t. (Ahem, Diplomatico and Don Papa).

Even though this rum was honest with using additives, using fake age statements is another hot topic, and the sneaky label design irks me a bit. Even so, the very affordable price makes the sting of being fooled by the fake age statement less painful.

Last is Tanduay’s CLX. CLX is the Roman numeral equivalent for 160. This rum was released to commemorate Tanduay’s 160th anniversary in 2014. I received this rum in return for a bottle swap. The original owner said this can or could be found in the local Duty Free. I’m not sure in which terminal or how much.

On the nose: I’m greeted by a bit of ethanol, followed quickly by light, brief aromas of cantaloupes, honeydew melon and starfruit. Slightly more pronounced and longer lasting aromas of lime peel and Thai lime leaves come next. At the end are subtle aromas of banana-flavored candy, pears and toffee.

In the mouth: The ethanol sensation is similar to the nose, but the profile is very different. What I taste are more confectionery flavors. To break it down, I get light tastes of vanilla caramel, Twix and Bazooka bubblegum. At the end is a very subtle flash of lime peel.

A bit more interesting and more full than the 1854. Interesting because the nose is completely different from the 1854’s. I’ve always been curious about how a spirit can smell very different from how it tastes. Unlike the 1854, this rum also doesn’t just fall flat at any point, which brings me to wonder if it’s just due to there being a greater amount of older rum in the blend? And/or if the distillates used in this blend are not as neutral as the usual components?

Despite being different on the nose, this rum is pretty similar to the 1854 in the mouth. The parallels make me wonder if this bottle also contains additives, but the lack of transparency on the label and information online doesn’t help in that department.

With the new rum renaissance and strengthened foreign presence, Tanduay will hopefully bottle their 170th anniversary releases at cask strength, with more details on the label.