Ambiguity: I’m not sure how I feel about it.

Usually, I can give you an up or down vote within a few seconds of nosing and tasting a whiskey. Proper notes and scoring take some time, of course, but first impressions are very seldom incorrect, at least directionally. Re-tasting usually occurs only in order to refine and crystallize that initial take on the whiskey in question.

There are exceptions, of course. Sometimes I’ll detect a flaw that wasn’t apparent to me initially, or only evident in miniscule amounts. An odd flavor or aroma occasionally dissipates; other times, that off note will increase in intensity to the point that it overwhelms the whiskey and becomes almost all I can sense.

Every occasionally, though, there will be a whiskey that I can’t quite pin down. This isn’t about a single uncanny smell or taste, typically. Rather, it’s about the entirety of the whiskey’s presentation, and I’ll frequently vacillate between slightly positive and slightly negative positions. It’s usually not bouncing between the poles of “love” and “hate,” so much as “mostly like” and “mildly dislike.”

We operate with a veneer of false precision here at Malt, given the inherently subjective nature of whiskey criticism and the variance between individuals’ palates and proclivities. The cracks in the façade are most apparent when it comes to our scores, which erroneously impart a quantitative aspect to an essentially qualitative exercise. There’s no way to establish whether a “6/10” is 20% better than a “5/10,” yet we persist in this method.

The numerical component of our evaluations is rendered yet more meaningless when the reviewer themself is unable to fix on a point estimate. What can you do with a whiskey that is a 4/10 for me on Monday, a 6/10 on Tuesday, and back to a 4/10 on Wednesday? You’re going to find out the hard way today, as I’ll be reviewing a whiskey that has had me stymied since my first sip.

Further flummoxing me is the fact that this is my favorite label (Elijah Craig Barrel Proof) from one of my favorite distilleries (Heaven Hill). Its specifications have resulted in speculation about its impending demise, given market conditions more generally and Heaven Hill’s recent history of “brand management.” The quotation marks there are meant to imply that this is a euphemistic way of describing the dropped age statements and jacked-up prices that provoke the ire of bourbon lovers.

At the risk of attracting undue attention to one of the last screaming values in American whiskey, let me recap the selling points of “ECBP,” as it is known to its increasingly nervous fans. We have here a bourbon presented at barrel proof, typically in the 120+ range (60% ABV and above). It carries an age statement of 12 years, a respectably lengthy maturation in the context of American whiskey. It’s not available everywhere all the time, but bottles still appear with enough regularity that it can be obtained a few times a year. Oh, yes, and the selling price: retail price in my area for this is usually around $70.

There aren’t many bourbons I accumulate at the rate of more than one bottle at a time. I’m a collector of Maker’s Mark Cask Strength batches, but their relative ubiquity means that I don’t have to stockpile multiples. I do, however, purchase nearly every bottle of ECBP that I come across. Regardless of batch, I have found myself so consistently enjoying this (and so dreading its threatened disappearance) that I can’t bear the thought of going without.

That is, until I cracked my first bottle of Batch B521. The 26th and most recent release in the series, this carries the lowest bottling strength to date, 118.2 proof (59.1% ABV). Now, proof is no promise of quality, as we recently discussed. A percentage point or two of ABV shouldn’t have a meaningful impact on the overall drinking experience, necessarily.

Yet, there was something about this bottle that has nagged at me as I have worked my way through it. I could speculate, but perhaps it’s more illustrative to show rather than tell. With that in mind, here are my tasting notes. Let’s meet back up at the conclusion, shall we?

On the nose: The first aroma that presents itself is sugar caramelized to the point of being burnt. There are woody notes in here, but again they appear in the charred manner of spent firewood. Dried herbal scents, anise, and a mentholated note creep in around the periphery, but this again returns to an ashy refrain. If I put myself in the most fruit-seeking frame of mind, I can barely tease out a little underripe, sour cherry scent in this, or perhaps a wisp of orange peel. There’s also a subtly creamy vanilla nuance that peeks out eventually. Mostly, though, it’s scorched earth as far as the nose can smell.

In the mouth: The first note is a drying kiss of intertwined wood and stone that is more textural than it is flavorful. This takes a turn toward a citric fruitiness that is bitter and sour as it is propelled up the tongue. There’s an almost effervescent texture to this that tickles the roof of the mouth, but the drying, stony notes reemerge to lend this a desiccating quality. At it best just before the finish, I get darker flavors of leather, cacao, and grilled nopales. There’s a slightly acrid smokiness to this on the finish, which again tacks toward a chalky stoniness that spreads over the palate and coats the inside of the mouth.

Thinking about what I didn’t necessarily like about this forced me to recall what I generally like about this expression. Hint: it’s not the gentle subtlety or delicate ephemerality of the flavors. Rather, it’s the overwhelming sensory experience of the type that bourbon lovers expect when they pick up a barrel proof bottling. This entails diverse notes packed together densely, presented robustly, with an overall mouthfeel full to bursting with fruit, sugar, spice, wood, and pretty much any other flavor you could possibly imagine.

In comparison, this batch has so many of the stern accents that would work best as balancing counterpoints to a fruity, gooey central flavor. However, in this case, there’s none of that lusciousness, none of that toothsome moreishness that has been a hallmark of the better batches of ECBP. We’re left with a somewhat dried out husk of a whiskey that pushes the bitterness to uncomfortable extremes at certain points. About the best that I can say is that if you like your whiskey austere, this batch is for you.

I have my misgivings that failing to make a positive or negative directional indication about this whiskey would be a wormy bit of waffling that deserves every bit of this audience’s contempt. I want to give this a 5, but I fear that might be a bit of favoritist clemency that doesn’t square with the actual sensation of tasting this whiskey, for me. Holding my own feet to the figurative fire, I am forced to dock this a point off of average.

Perhaps this is a lesson in fence sitting. When the focus is sharpened and the senses are engaged, the merely “meh” can reveal itself to be subtly charming, or midlly offensive. Though this batch of ECBP tipped over into the latter, I am reserving the right to revisit it. Perhaps a better mood, more rest, or other subconscious influences will make me change my mind later on? I’m not able to say for certain… 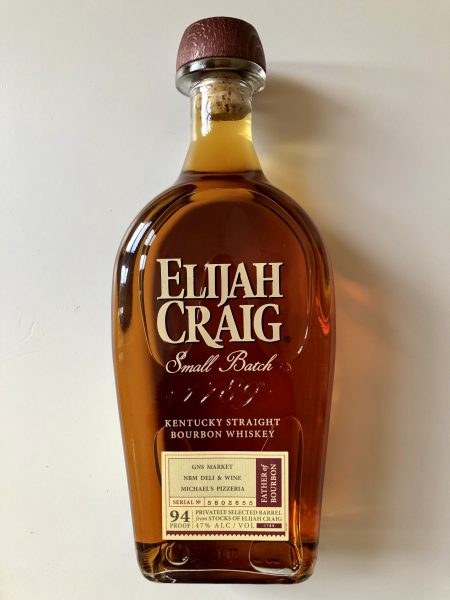